Pete Davidson will be keeping his feet firmly on the ground after giving up his spot on Jeff Bezos’ upcoming Blue Origin flight into outer space amid his ongoing and very public feud with rapper Kanye West.

The 28-year-old Saturday Night Live star’s withdrawal from the upcoming space flight comes just three days after it was first revealed that he had secured a spot on the space company’s fourth passenger mission, and follows a dramatic few days that have seen Davidson and West’s ugly spat reach new heights.

Davidson had been due to embark on his first trip into outer space aboard Blue Origin’s New Shepard rocket on March 23, however a tweet posted by the space company’s official Twitter account on Thursday evening revealed that the trip has been moved to March 29 and that the comedian will no longer be onboard.

The tweet hinted that a scheduling conflict was to blame for Davidson pulling out of the flight, which marks the New Shepard shuttle’s 20th launch, and the fourth with human passengers.

‘Blue Origin’s 20th flight of New Shepard has shifted to Tuesday, March 29,’ the tweet began. ‘Pete Davidson is no longer able to join the NS-20 crew on this mission. We will announce the sixth crew member in the coming days.’

Grounded: Just three days after it was revealed that he was about to head into outer space, Pete Davidson is remaining on Earth 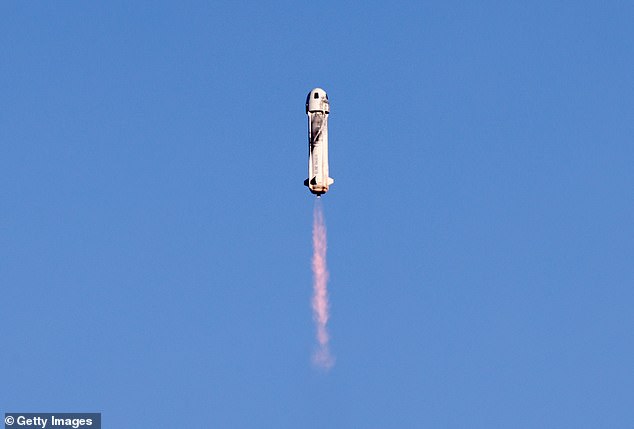 Shuttle: The 28-year-old Saturday Night Live star was revealed to be one of the six guests aboard the next flight of Jeff Bezos’ Blue Origin space company

Not aboard: Blue Origin announced on Thursday evening that New Shepard flight originally scheduled for March 23 will now happen on March 29, and that Davidson will not be aboard

The tweet lead to a number of responses, including one from actor Kal Penn, who simply sent a, ‘Happy man raising one hand’ emoji, seemingly volunteering to take Davidson’s place.

It is not yet known who will take his place aboard the flight and Davidson has yet to publicly comment on his withdrawal from the mission.

However, the news follows what has been a controversy-filled few days for the actor and his girlfriend, both of whom have come under repeated attack from West, who has now legally changed his name to Ye.

On Wednesday, the rapper was handed a temporary suspension from Instagram after he attacked the couple in a series of posts, which parent company Meta said violated its policies on hate speech, harassment, and bullying.

Earlier in the day, West had posted that he was ‘really concerned’ Davidson would get Kardashian ‘hooked on drugs’ and demanded the comedian ‘apologize to your family for being in your family.’

Kal volunteers: The tweet lead to a number of responses, including one from actor Kal Penn, who simply sent a, ‘Happy man raising one hand’ emoji, seemingly volunteering to take Davidson’s place 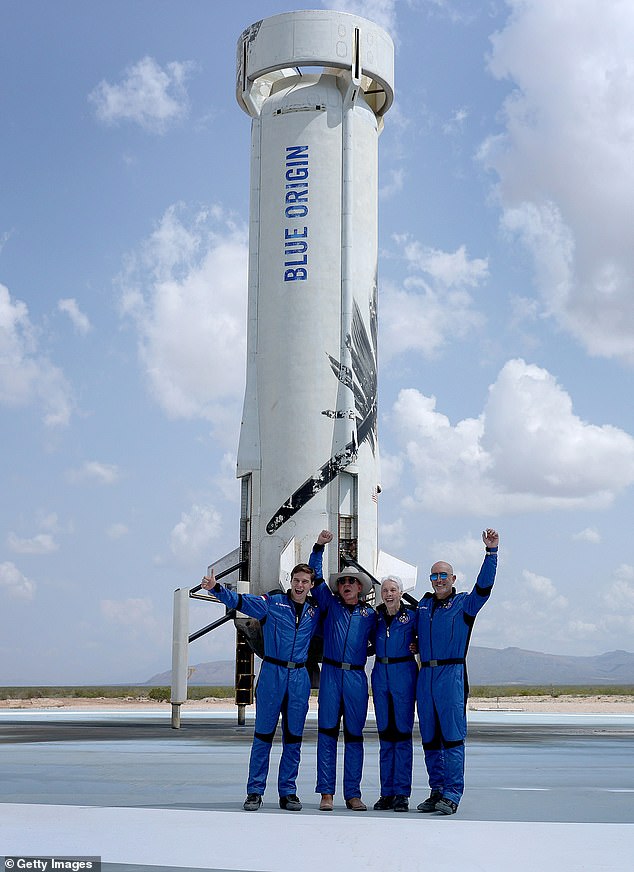 Launch: NS-20 will be the New Shepard shuttle’s 20th launch of the private space company, and the fourth with human passengers

The rapper also took aim at talk show host Trevor Noah who weighed in on Kanye’s feud in the latest episode of The Daily Show, warning that the online fight between the former couple could get violent and was ‘terrifying to watch’.

In response, West posted images of Noah to his account with a caption that read in part: ‘All in together now… K**n baya my lord k**n baya.’ The racist post appears to have been removed.

West’s account was suspended for 24 hours, leaving him unable to post content, comment on posts or send direct messages. The platform said that it may seek additional steps against West if further violations occur.

Kardashian and Davidson began dating in November 2021, just one month after she hosted an episode of SNL in which the pair kissed as part of a sketch.

Their relationship was made public nine months after Kardashian officially filed for divorce from West following seven years of marriage.

West has never been happy with the relationship, with the rapper even threatening to ‘beat Pete Davidson’s a**’ in his song Eazy, released in January. 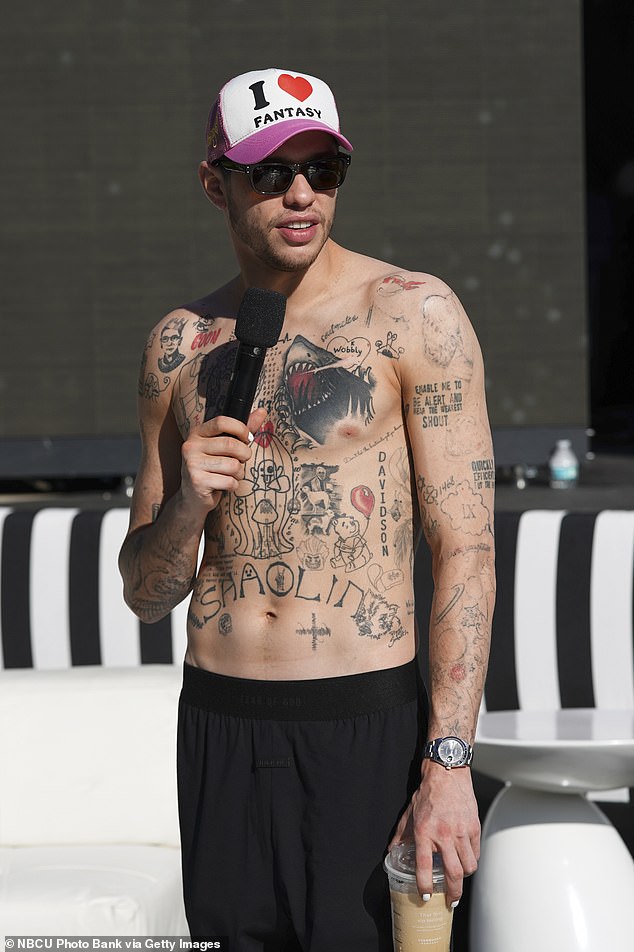 Dating: Kardashian started dating Davidson in November 2021, just a month after she hosted Saturday Night Live, with an episode that included a sketch where they both kissed 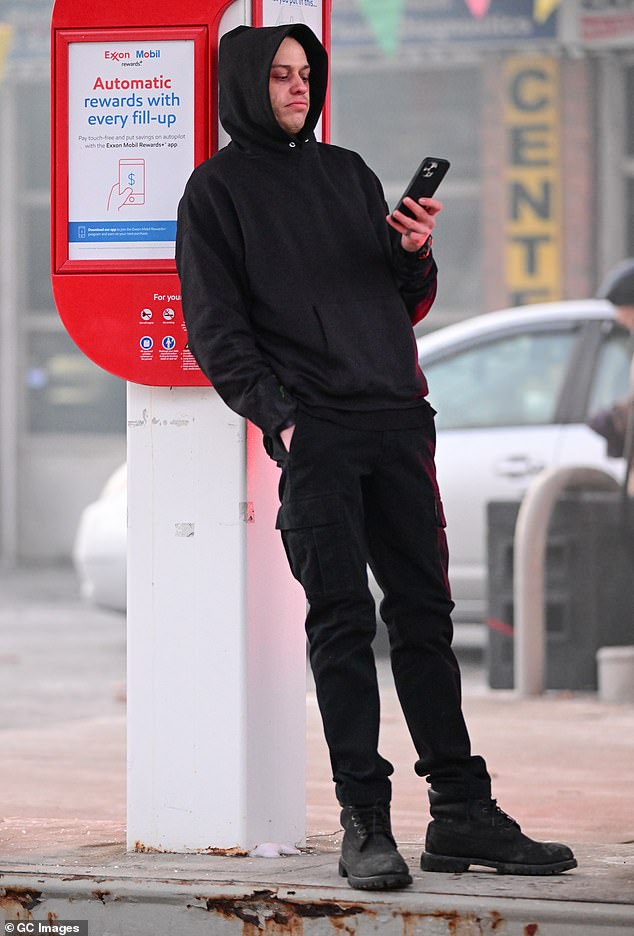 Not happy: Kim’s ex Kanye West has never been happy with the relationship, with the rapper referencing Davidson in a 2022 song Eazy where he threatened to ‘beat Pete Davidson’s a**’

On March 2, Kardashian was declared legally single by a judge, however she and West have yet to reach a financial settlement, nor have they concluded their battle over custody of their four children: North, eight, Saint, six, Chicago, four, and Psalm, two.

On Tuesday, it was reported that West’s lawyer is ‘seeking to establish formal custody arrangements between the star and Kim’ as they continue to fight over the care of their children.

As of now, Kardashian is allowing West to spend time with the children whenever he is in town and wants to, as long as they’re not already busy.

Davidson has been keeping busy aside from his work on SNL, with his new film Bodies Bodies Bodies debuting this week at SXSW in Austin.

He also has two movies in post-production – Good Mourning With a U and Meet Cute.