Pete and Lisa had a brief fling in 2003, and the English singer-songwriter eventually welcomed their son Astile, now 18.

The singer was once-banned from seeing his son because of his drug habit, but after going to rehab and getting clean, he became a much more hands-on dad.

Lisa told Metro in 2009: ‘Peter has on-and-off problems with his recovery so it was a really difficult decision to make.

‘But when he came out of rehab last year, and started to get his life in order I thought the time was right. I want Astile to have a dad.’

Pete’s most high-profile romance was with model Kate, after they met at her 31st birthday bash in Jauary 2005, and he declared soon after that he’d ‘really found love.’

Their turbulent romance briefly ended when Pete failed to complete a stint in rehab in Arizona, USA, with Kate saying at the time she has ‘various personal issues I need to address.’

He even drew a portrait of himself and Kate using crayons and his own blood in 2005.

Pete also famously scrawled ‘I love Kate 4 eva’ on the windscreen of his Jaguar after leaving court following a drug-related offence.

He and Kate eventually reunited and attended rehab together, but they were seen in many public rows before they finally split in July 2007 after getting engaged.

Pete then famously branded her a ‘nasty old rag’ in an interview with Metro after they split for good in 2007, which came months after he proposed to her.

In one of the most unlikely romances in showbusiness, Big Brother star Nikki was reported to have had a short fling with Pete days after he rekindled his romance with Kate.

He reportedly serenaded her at his flat with his guitar, after they met during a night out at London hotspot Boujis.

Nikki’s ex-flatmate told The People: ‘She’d had a lot to drink and they ended up going back to his place in Notting Hill, just the two of them. He got his guitar out and started singing to her.

‘Nikki thought he was really sweet and caring but his flat was disgusting. There were needles everywhere and it was filthy.’

In an interview in 2006, Nikki also revealed that Pete was one of her clients during her brief stint as a £500-per-hour escort.

She told MailOnline: ‘He was my first booking. He often used the agency. I went round to a flat in London. It was a complete s*** hole full of other druggies playing guitars and just hanging out.

‘I ended up snogging him but we didn’t have full sex. He was so wasted on drugs he wasn’t capable.’

Weeks after he split from Kate, Pete proposed to model and singer Irina for the second time, after the pair previously dated in 2004

The pair met while Irina was at ballet school in London as a teenager, and she went onto tour with his band Babyshambles in 2004. 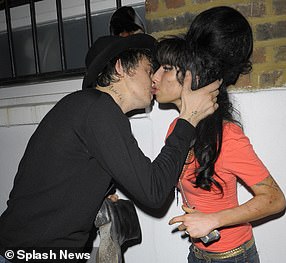 Former flame: Pete revealed in 2012 he and Amy Winehouse were ‘lovers’

Pete also has a daughter, Aisling, with model Lindi Hingston, who shared news of her daughter’s arrival in 2012, a year after she was born.

A week after Linda shared the news, Pete said: ‘The little girl was two months premature. I said I’d try to be there for the birth… Yeah, she’s mine.’

In 2012, a year after her death from alcohol poisoning, Pete revealed he and Amy did enjoy a secret romance.

Speaking to The Mail On Sunday in 2012, he said: ‘Amy and I were lovers. I loved her then and, well, I still do today.

‘But towards the end, as only lovers can, she became quite mean and cruel to me. She didn’t suffer fools… and believe me, she had a mean right hook.’ 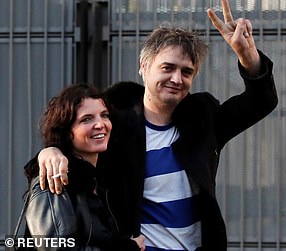 Pete is thought to have been dating his Puta Madres bandmate Katia since 2012.

The pair have been living a quiet life in Etretat, a coastal town in Normandy after the rocker quit his drug habit.

While lockdown has been tough for so many people, Pete is honestly the happiest he’s ever been.

A source told The Sun: ‘While lockdown has been tough for so many people, Pete is honestly the happiest he’s ever been.

‘He used to live a fast-paced, hedonistic lifestyle. He was the epitome of rock and roll. But the relaxed pace of life suits him more.’