Peter Andre spotted in a clip from Leaving Neverland

Peter Andre took part and came second in the 1987 dancing competition which led to Wade Robson’s fateful meeting with Michael Jackson and years of alleged abuse.

In a shocking new documentary, Leaving Neverland, Peter makes a short appearance in the background of an image of the competition, which took place in Brisbane, Australia, when he was aged 15.

The 46-year-old is pictured wearing MJ-esque black fedora and a red bow-tie, complete with a black leather jacket and trousers with white socks.

Unexpected: Peter Andre, (circled) took part in a 1987 dance competition when he was aged 15 in which the prize was to meet Michael Jackson – he came in second place

The competition prize was to meet Jackson, who has since been accused by Robson, now 36, and James Safechuck, now 41, of sexually abusing them when they were young children.

Peter confirmed he was the boy in the image, and an insider told The Sun: ‘Pete was devastated to lose out to Wade.

‘However, he has always supported Michael and loves his music – even though he didn’t win he became close with his family. Peter is always asked what he thinks about it all.’ 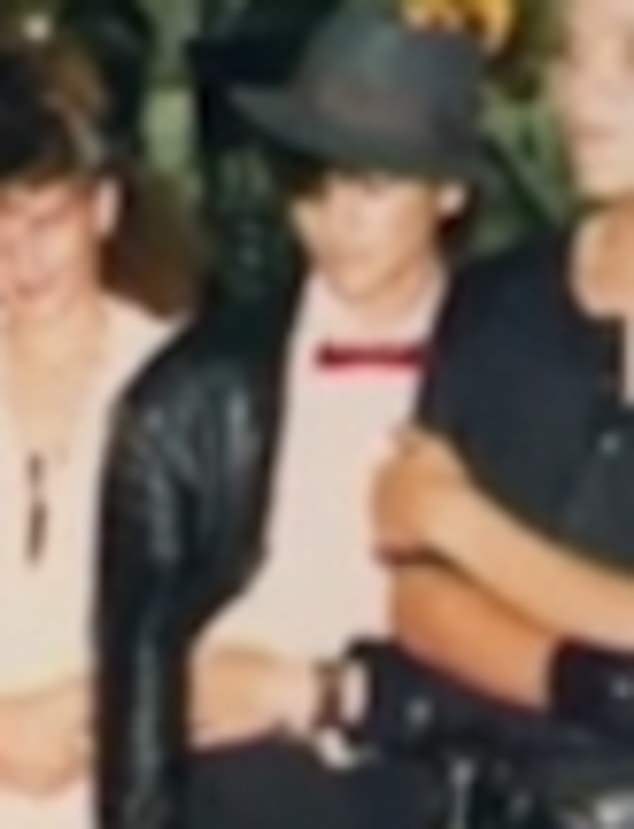 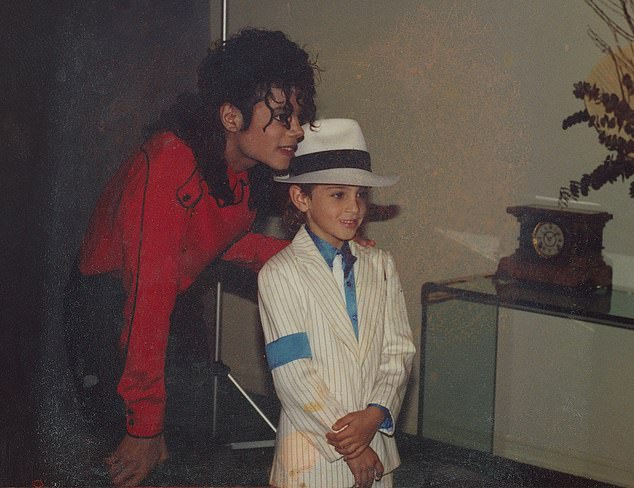 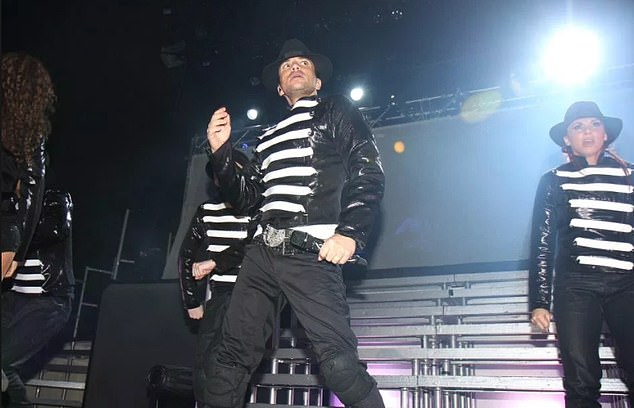 Paying tribute: Peter remains a huge fan of Jackson’s work and his dance moves and on stage costumes are inspired by his work, (pictured in 2010)

In a twist of fate, Wade may not have been able to enter the competition at all because he was actually underage and bent the rules, meaning Peter would have won.

The night after the competition Wade took to the stage alongside Jackson, forming the beginning of their close friendship. 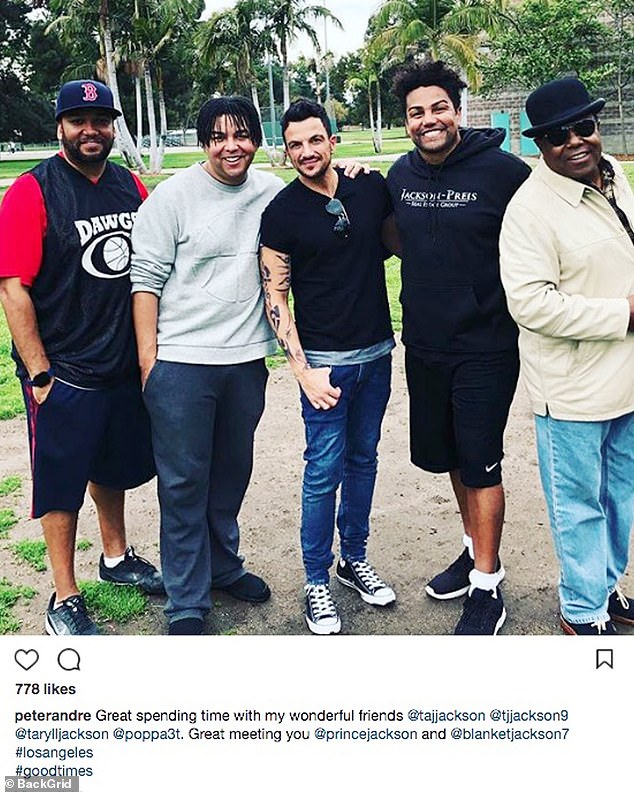 Close: Peter has since formed a firm friendship with the rest of the Jackson family and in 2018, shared this picture with Taryll, TJ, Taj and their father Tito Jackson while in LA

However after the allegations of abuse resurfaced, Peter insisted that Jackson has previously been cleared of all charges and said people must ‘trust in the justice system’.

Although Peter, who is currently on a 25-date tour of shows to celebrate the 25th anniversary of his career in music, didn’t mention the dancing competition, he did discuss the documentary in his new! magazine column.

He said: ‘There’s a new Michael Jackson documentary on this week and it has caused a lot of controversy about sexual abuse.’ 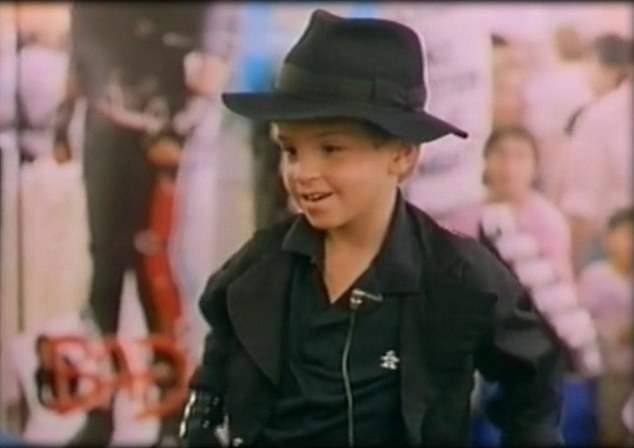 Winner: Wade won the competition, despite being too young to enter at five years old, so Peter should have been the clear winner

He added: ‘First and foremost what I will say is we have to rely on the justice system and we mustn’t forget that he was acquitted of not just one, but all child molestation charges during his trial in 2005.’

‘You can’t just stop listening to an artist’s music due to accusations alone.’

Peter has formed a firm friendship with the rest of the Jackson family and in 2018, shared a picture of himself in LA with Taryll, TJ, Taj and their father Tito Jackson

In September, Peter performed at the Gala Charity Performance of Thriller in aid of The Prince’s Trust for its 4000th show.

Leaving Neverland premiered at the Sundance Film Festival, where Mr Robson and Mr Safechuck got a standing ovation afterwards. 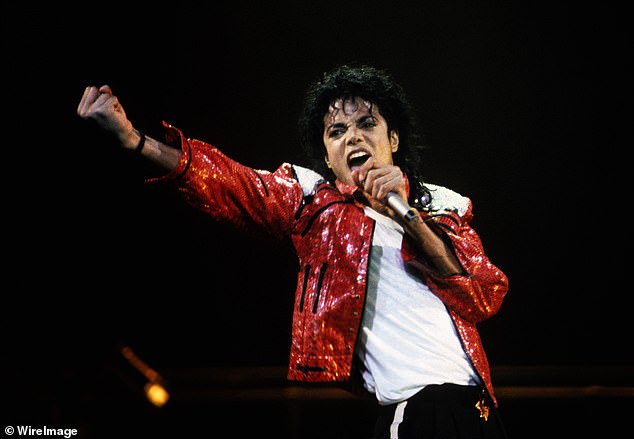 Speaking for him: Jackson’s family have said the star is the victim of a ‘public lynching’ when he ‘is not here to defend himself’ (pictured in 1986)

Jackson’s family have said the star is the victim of a ‘public lynching’ when he ‘is not here to defend himself’.

The Jackson family points out that Michael was subjected to a thorough investigation which included a surprise raid of his home, the Neverland Ranch, but was still acquitted at his criminal trial in 2005, in a case involving another young man.

Wade Robson testified at that trial, saying he had slept in Michael Jackson’s room many times, but that Michael had never molested him.

James Safechuck made similar statements to investigators as a boy. Michael Jackson died in 2009. 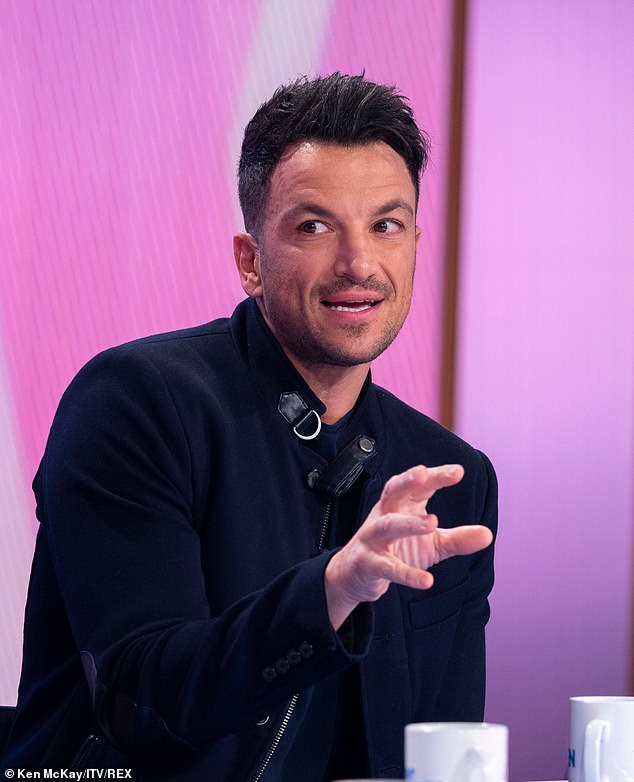 Defending him: However after the allegations of abuse resurfaced, Peter insisted that Jackson has previously been cleared of all charges and said people must ‘trust in the justice system’