‘I thought I got away with the no voice thing’: Peter Crouch makes early exit from BT Sport punditry duty after losing his voice during coverage of Spurs’ comeback victory over Olympiacos in the Champions League

Eric Dier wasn’t the only one who had to make an early exit from Champions League action on Tuesday night as Peter Crouch struggled to find his voice on BT Sports punditry duty.

The former England striker has been a big hit ever since he picked up the microphone after calling an end to his illustrious career, in which he made 468 Premier League appearances, scoring 108 goals for Tottenham Hotspur, Aston Villa, Southampton, Liverpool, Portsmouth, Stoke and Burnley.

Crouch was meant to be involved in BT Sport’s coverage of Jose Mourinho’s first game as Spurs manager at the Tottenham Hotspur stadium in their European tie against Olympiakos, alongside Rio Ferdinand and Glenn Hoddle. 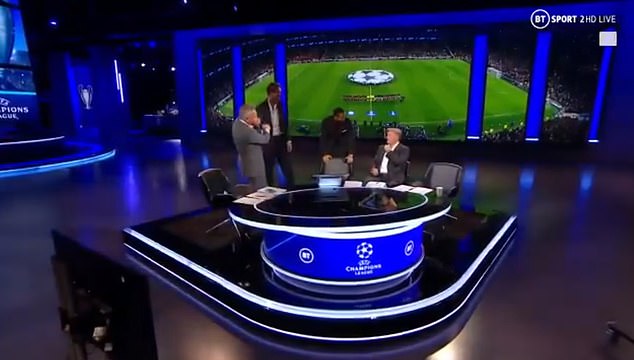 However, Crouch made a quick dash after being unable to hit the right notes on the night, with host Gary Lineker in a playful mood as the big man left the set.

Holding his nose as he shook Crouch’s hand, Lineker said: ‘Well, no more Crouch on the couch. He’s no slouch, he’s just got a sore throat and no voice. Ouch.

‘We’ve sent him to his rather extra long bed.’

Crouch took to Twitter to have his say on his hasty exit. He said: ‘I thought I got away with the no voice thing @rioferdy5 @GaryLineker @GlennHoddle’.

It’s unlikely that a cold will keep the 6ft 7in Crouch out for too long. The 38-year-old has been a regular pundit for BT Sport this season and will hope to be fit and raring to go for their coverage of Newcastle United vs. Manchester City on Saturday. 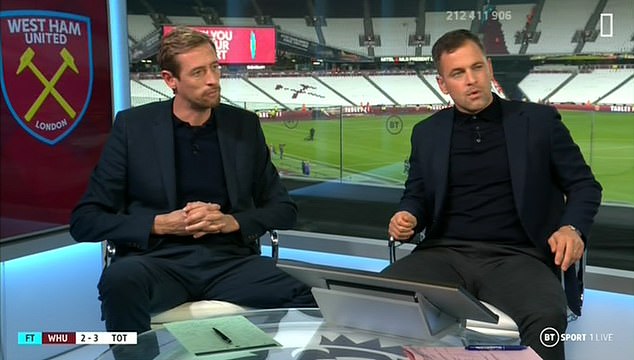