Peter Dutton set to hold on to his seat in Parliament, ABC projects

‘The sweetest victory’: Peter Dutton WINS his seat despite campaign against the divisive minister for his bid to topple Malcolm Turnbull

Peter Dutton says it’s ‘the sweetest victory’ as he wins his seat in Brisbane’s north despite a super-powered campaign against the divisive minister for toppling Malcolm Turnbull.

Mr Dutton managed to maintain his Dickson seat, despite controversially questioning the living arrangements of his Labor opponent Ali France, who lost a leg in 2011.

The Home Affairs minister currently holds a primary vote of 53 per cent and 51.7 per cent of the votes have already been counted.

‘But there is an amazing mood across Queensland and across the country in support of the Prime Minister. And I want to pay tribute to Scott Morrison tonight for his leadership.’

Mr Dutton said a lot of ‘mud’ was thrown at him and his supporters during the campaign.

‘GetUp and the Labor Party and the Greens have had the dirtiest campaign in history,’ he said.

‘And tonight, the people of Dickson have rejected their negative campaigning.’ 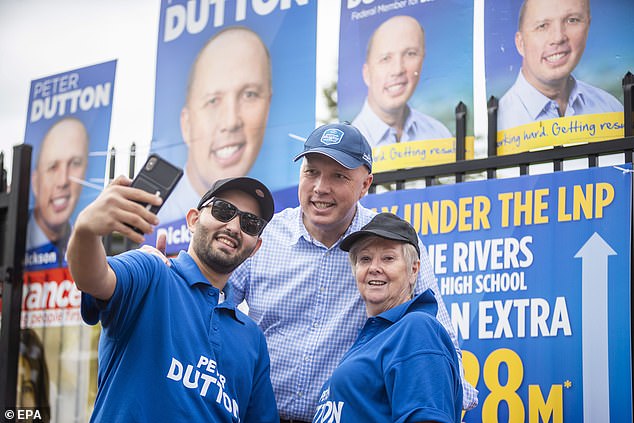 ‘He’s a terrifying force for the extreme right of the Liberal party, the architect of the GP copayment and $57 billion in hospital cuts, and a blocker of progress on renewable energy and climate action,’ GetUp! said in their campaign.

‘As the election heats up, Dutton remains vulnerable in his electorate of Dickson.’

A loss for Mr Dutton in the seat of Dickson would have been a massive blow for the Liberal Party. 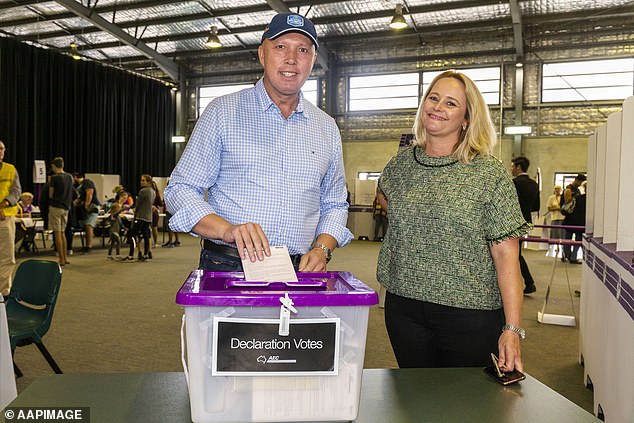 Mr Dutton currently holds a primary vote of 51.2 per cent and 44 per cent of the votes have already been counted

GetUp! also ran a campaign against former Prime Minister Tony Abbott who lost his seat of Warringah after 25 years in power.

The GetUp! campagin against Abbott said: ‘He’s vulnerable in his seat of Warringah, but it will still take a massive campaign of phone calls, door-knocking, advertising and more to get it done. Think Wentworth, but much bigger’.

They also ran a television advertisement which featured a Mr Abbott look-alike refusing to save a drowning person as an analogy to his stance on climate change.

The controversial ad was pulled following backlash from lifesavers.