Lord Hain today defended unmasking Philip Green in the House of Lords after it emerged the law firm he works for has been advising the Telegraph in its battle with the billionaire.

The former Cabinet minister insisted he had no idea Gordon Dadds were involved when he used Parliamentary Privilege to sidestep an injunction.

The peer caused a storm yesterday when he dramatically named Sir Philip in the chamber, after the newspaper was prevented from identifying him in a story about allegations of sexual and racial harassment.

Anything Members of Parliament say in the chamber is subject to ‘absolute privilege’, and cannot be controlled by judges.

The fashion chain tycoon was named in the House of Lords by former minister Lord Peter Hain (pictured, in the Chamber yesterday) 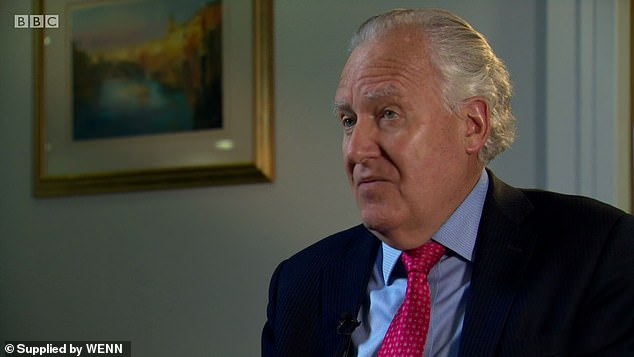 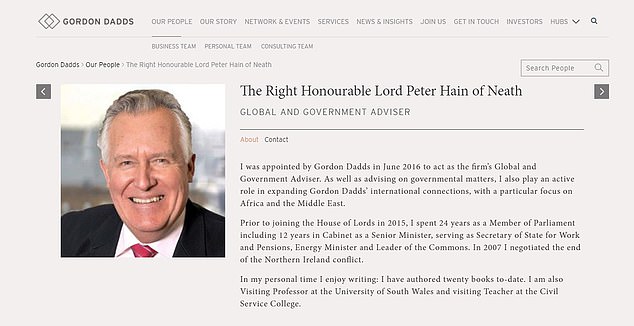 It emerged today that Lord Hain works as a global and government adviser for Gordon Dadds (pictured, his profile on the legal firm’s website)

Lord Hain did not declare his interest as ‘Global and Governmental Adviser’ to Gordon Dadds as he rose to make his comments about the case yesterday.

Who is the former Labour minister Peter Hain who named Philip Green in the Lords?

Peter Hain, the politician who named Sir Philip Green in the Lords today, is a veteran Labour minister who has served on the political front lines for almost 30 years.

Hain, 68, entered Parliament in 1991 as MP for Neath and served in a series Cabinet posts under Tony Blair and Gordon Brown. 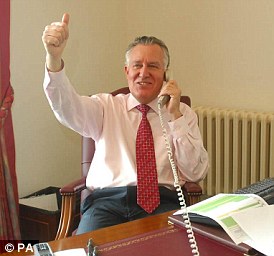 Peter Hain, then Northern Ireland Secretary, in his office at the Stormont Assembly building in Belfast in 2007

A married father of two, Hain entered the House of Lords after the 2015 General Election.

Hain’s last brush with the law came during a bizarre contempt of court case in March 2012.

The then Attorney General of Northern Ireland John Larkin tried to prosecute Hain for comments in a book about a 2007 judicial review.

The case descended into farce when the Lord Chief Justice of Northern Ireland tried to charge him with ‘scandalising the court’, an arcane 19th Century offence. The case was dropped a month before its trial date.

But he insisted today that he did not know that the firm was advising the Telegraph on the case.

‘I took the decision to name Sir Philip Green in my personal capacity as an independent member of the House Of Lords,’ he said.

‘I categorically state that I was completely unaware Gordon Dadds were advising the Telegraph regarding this case.

‘Gordon Dadds, a highly respected and reputable international law firm, played absolutely no part whatsoever in either the sourcing of my information or my independent decision to name Sir Philip.

‘They were completely unaware of my intentions until after I spoke in the House of Lords.’

The law firm told the BBC Lord Hain had not obtained any information from them about the case.

Legal experts today questioned Lord Hain’s decision to exercise his right to name Sir Philip because the case is going through the courts.

Former attorney general Dominic Grieve QC said Lord Hain’s behaviour had been ‘clearly arrogant’ and he had abused parliamentary privilege in deciding he knew better than the courts.

‘You cannot operate a democratic, free society subject to the rule of law when peers or MPs decide quite capriciously to take the law into their own hands,’ he told BBC Radio 4’s World at One.

And ex-lord chief justice Lord Judge told the programme he thought Lord Hain was wrong, adding: ‘I don’t think that parliamentary privilege is designed to take away any citizen’s rights, even if we don’t very much like them.’

The principle of parliamentary privilege means that MPs and peers cannot be sued for libel for comments made in the Houses of Parliament, and offers protection to media outlets reporting those comments.

Lord Hain said he felt he had a ‘duty’ to name Sir Philip.

Meanwhile, the Telegraph has written to the tycoon’s lawyers threatening to quickly return to court for the trial unless they drop the injunction.

Ending the legal battle would allow its reporters to air the allegations from those who entered controversial non-disclosure agreements.

What is parliamentary privilege and how does it work?

Parliamentary privilege grants MPs and peers the right to make accusations in Parliament while being immune from many legal consequences.

So an MP or peer can accuse a named person of wrongdoing and even criminal conduct without fearing being sued.

The power was intended to protect parliamentarians from interference by the monarch of the day.

But the power is controversial and critics warn it can be abused by politicians who use it to make allegations of criminal wrongdoing without fear of the consequences.

Lord Hain told peers yesterday that he had been contacted by someone ‘intimately involved’ in a case of a wealthy businessman using non-disclosure agreements and payments ‘to conceal the truth about serious and repeated sexual harassment, racist abuse and bullying’.

He said: ‘I feel it’s my duty under parliamentary privilege to name Philip Green as the individual in question given that the media have been subject to an injunction preventing publication of the full details of a story which is clearly in the public interest.’

Sir Philip responded in a statement, saying: ‘I am not commenting on anything that has happened in court or was said in Parliament today. 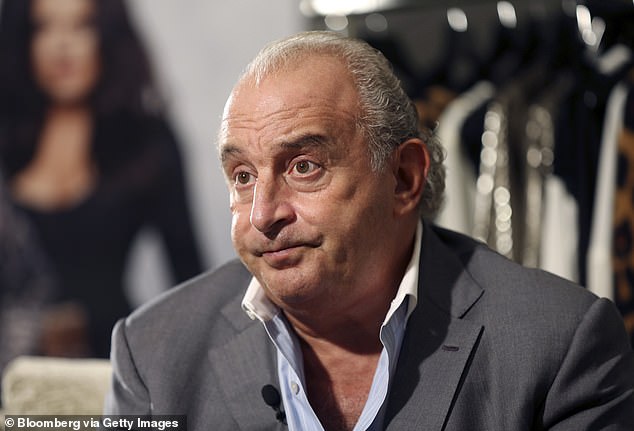 Sir Philip Green, who built a business empire worth £4billion as boss of Arcadia, which owns Topshop, Miss Selfridge and Dorothy Perkins, was named in Parliament as the businessman who used gagging orders to allegedly ‘silence’ allegations from workers

What was Sir Philip Green’s statement in response to Lord Hain’s allegation?

Sir Philip Green said: ‘I am not commenting on anything that has happened in court or was said in Parliament today.