PETER HITCHENS: Supreme Court? It might as well be passing judgement on a bottle of wine

Actually, there is no such thing as the Supreme Court of the United Kingdom. They can call it that if they like, but the title is a fiction. There is nothing supreme about it.

Until we leave the EU, our actual Supreme Court is, as it has been for many years, the European Court of Justice in Luxembourg.

But if we ever manage to escape from the EU, then Parliament is a far higher court than this self-important assembly of lawyers in suits.

Keen observers of the ridiculous hearings of the past few days will have noticed the bare, almost republican room in which the court meets, less grand than some council committees I have attended.

The judges – and the lawyers appearing before them – do not wear the traditional robes and wigs which say so loudly that those who don them are serving the law, and are not just politicians or bureaucrats.

The nasty thing has been grafted on to our free constitution by Blairite revolutionaries – many of them Left-wing lawyers. 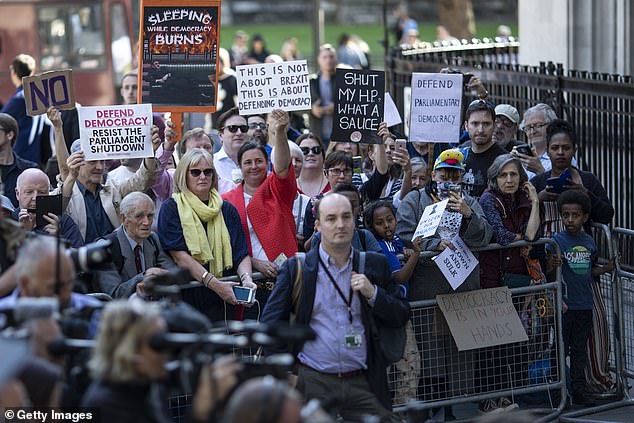 Until we leave the EU, our actual Supreme Court is, as it has been for many years, the European Court of Justice in Luxembourg. Demonstrators are pictured outside the Supreme Court in London

They had long planned a slow-motion putsch against conservative Britain. For this tiny, self-important group of men and women realised that they had an astonishing power.

They were allowed to decide what the law meant. And nobody could challenge them.

This was bad enough when they took advantage of the vague wording of ‘Human Rights’ charters.

They used this to invent all kinds of rights for those members of society they favoured and wished to help.

In the same way, they abolished the former freedoms of those who had been in charge before. 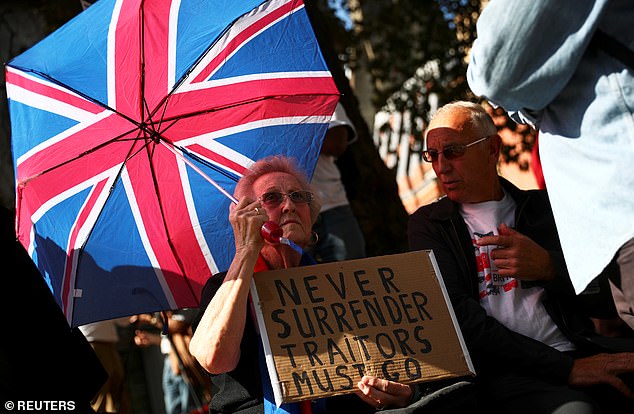 Personally, I think Al Johnson’s action was a shabby trick (though it failed to work). But the idea that the courts should have anything to say about proroguing Parliament is absurd

No need to storm the Bastille or capture the barracks and the railway station. Just issue a judgment, and abolish the morals and customs of ten generations in an afternoon.

For example, like it or not, state schools are going to teach children about homosexuality. This is now the law.

That use of the law to change our culture and morals was revolutionary enough. That brilliant mind, and former Supreme Court judge Lord Sumption, recently warned this would ‘entrench a broad range of liberal principles’ in the foundations of the State. Democracy would then be almost powerless to remove or limit them.

He then accused his fellow lawyers of being so sure they were right that they claimed a monopoly on deciding how the country should be governed. 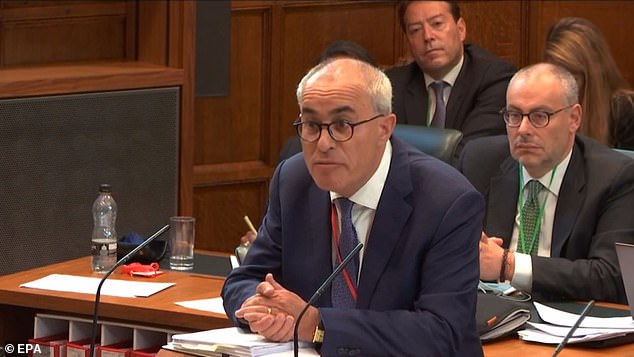 Lord David Pannick is pictured above representing Gina Miller during the case. I just hope the ‘Supreme Court’ will have the sense to recognise this and throw the whole thing out

He warned, with astonishing brutality, that such a belief is ‘no different from the claim of communism, fascism, monarchism, Catholicism, Islamism and all the other great isms that have historically claimed a monopoly of legitimate political discourse on the ground that its advocates considered themselves to be obviously right’. Crikey.

The readiness of the courts to hear legal actions against the Prime Minister’s suspension of Parliament is a whole new outrage.

Personally, I think Al Johnson’s action was a shabby trick (though it failed to work).

But the idea that the courts should have anything to say about proroguing Parliament is absurd.

There is no law, no precedent. Within our constitution, Prime Ministers can do this sort of thing and often it will be right and necessary.

You might as well get the Supreme Court to rule on whether the red wines of Burgundy are better than those of Bordeaux.

The judges could have a lot of fun examining the matter. But their opinion, at the end, would be worth nothing.

And so we see from the ‘evidence’ presented at this gathering of learned kangaroos. It’s all opinions.

I’m all in favour of opinions. I express lots of them. I wish my opinions influenced politicians and judges, and the people. But opinions are not laws, and they are not facts.

Ten thousand brilliant legal brains could not read Mr Johnson’s mind or prove that he misled the Queen, and Her Majesty is certainly not going to give them any evidence on that score.

I just hope the ‘Supreme Court’ will have the sense to recognise this and throw the whole thing out. But in such frightening times as these, I can’t be sure.

Our whole tradition of fair, wise government is tottering, and I am not convinced it can survive these games.

Gripping proof our police have totally lost the plot

The superb ITV drama about the 2011 Sian O’Callaghan murder, A Confession, is not just utterly absorbing.

It raises huge questions about what has happened to the police. It stars Martin Freeman as the dreadfully wronged officer Steve Fulcher.

Any sensible society would promote him and garland him with honours. He was a proper policeman, who by hard work and good instinct caught the grisly murderer of Sian O’Callaghan.

Then, by clever questioning, he uncovered another unknown killing by the same man. His task was especially hard because, at the time, he did not know that the first victim was dead.

So he rightly saw his first duty as finding and saving her. In the end, the killer was convicted for both crimes. 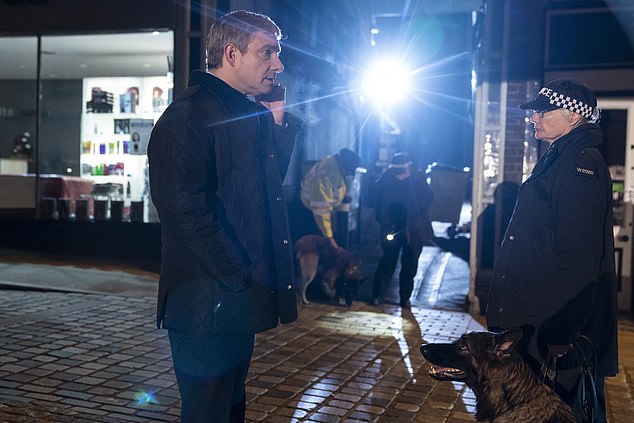 The superb ITV drama about the 2011 Sian O’Callaghan murder, A Confession, is not just utterly absorbing. It raises huge questions about what has happened to the police. It stars Martin Freeman as the dreadfully wronged officer Steve Fulcher

But because Detective Superintendent Fulcher did not follow the piffling procedures of the disastrous 1984 Police and Criminal Evidence Act (PACE), he was not honoured, but severely disciplined for gross misconduct.

PACE is a set of rules designed by liberals who don’t trust the police (but passed, of course, by a Tory Government).

Though he was allowed to keep his job, Mr Fulcher eventually resigned. It is not hard to imagine why.

Contrast his treatment with the endless rise of Cressida Dick, now the Metropolitan Police Commissioner.

Her climb to the top has been unimpeded by anything. It is unmarked (as far as I know) by any great feats of detection.

And also contrast it with the ‘celebrity paedophile’ squad.

One of its leaders very wrongly said that wild claims by the fantasist Carl Beech were ‘credible and true’. They then publicly invaded the lives of several innocent people, doing great harm to their reputations. But has anyone been disciplined?

Dame Cressida, as she has now become, has rejected calls for a criminal probe into the officers involved in investigating the claims by Beech. But now it has emerged that she had herself overseen the Scotland Yard investigation in its early stages.

I think this tale of two coppers explains very well why the whole police service needs to be ferociously and totally reformed from top to bottom, now.

One of the many puzzling things about the rise of David Cameron to power is that he seems to have no ability to learn from experience.

He was in deep trouble with the Queen after his first boastful claim that she had been ‘purring’ down the phone after the Scottish referendum rejected independence.

He said this only to make himself sound important. I should guess it must chill the marrow, and more than the marrow, to be on the receiving end of a personal rocket from the Palace.

Now he has pretty much done exactly the same thing all over again. Is it possible that this oily nobody is, quite simply, thick? Or was it the marijuana? 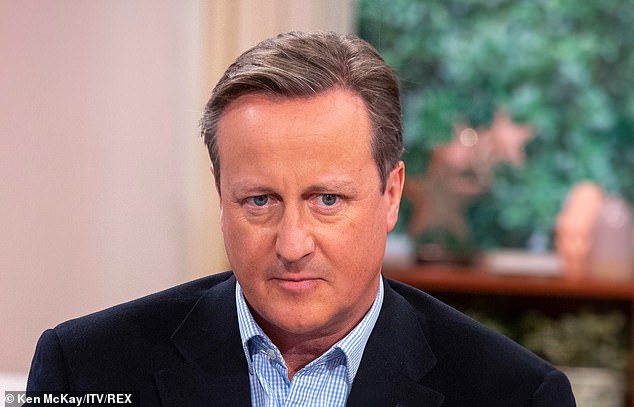 There are so many other things that need scientific investigation, but I’m still grateful for research which shows what all cyclists and pedestrians know – that cars which throb and bulge with ultra-noisy ‘music’ are to be avoided.

A thumping beat means danger, violent acceleration, a red-eyed refusal to notice lesser mortals on the roads, and maybe something else too, which a proper police force would stop them to investigate.