PETER HITCHENS: Troops in Afghanistan? I’d far rather see some police on patrol at home

If there was a campaign on the BBC to send British troops to the Moon, retired generals, MPs and the rest would keenly join it, maundering about our duties to Moon women etc.

Yet when it comes to intervening in our own country, you can’t get anyone to do it. How come those so anxious to keep troops in Helmand, or to bomb Libya, Syria and the others, don’t seem able or willing to maintain a decent police presence in (for example) London NW9?

Last week it emerged at the Old Bailey that three young men in a North London gang had decided last September to go to the next-door suburb of Colindale. Their aim was to prove their gang could ‘turn up on enemy territory and attack who they liked’.

I agree, it’s not the Taliban – in fact, it makes them look quite thoughtful – but that makes little difference if you happen to be the chosen victim of such people.

The person they liked to attack was a young Marks & Spencer shop worker called Anthony Adekola, aged 22. They had never met him and did not care who he was.

He sensibly ran for his life when eight of them stopped him in the street. But he tripped over a stone bollard and fell to the ground. They then caught up. And they stabbed him nine times in the face, head, neck, back, chest, arms and leg. I’ll bet that the police have not provided a regular foot patrol on the street involved for decades.

The jury was told, moronically, that Mr Adekola was ‘in the wrong place at the wrong time’. This infuriating expression really should be banned from use in such matters.

Mr Adekola, God rest his soul, was minding his own lawful business near his home on a public road in what we like to think is a civilised city. Neither the time nor the place was wrong. 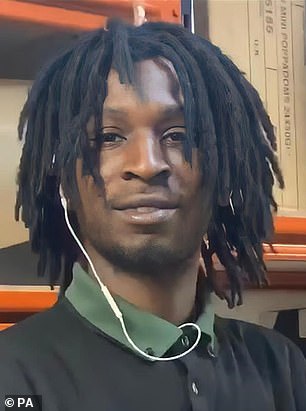 Mr Adekola, God rest his soul, was minding his own lawful business near his home on a public road in what we like to think is a civilised city. Neither the time nor the place was wrong

What was wrong was that people with evil intent had no fear of the law, and so thought they could do what they liked. They might very easily have been right, as such people often are.

I’d also be astonished if the merciless killers involved were not (as so many nowadays are) crazed by the illegal use of marijuana, a crime the police and courts think is unimportant, and no longer bother to pursue.

So the next time anyone suggests we send soldiers to die in the sand of some distant country, which we do not understand and cannot really help, I have another idea.

I suggest instead that we send constables on foot to Britain, which we understand all too well, but leave unguarded from evil.

It’s a long time since I have seen a demonstration against the Vietnam War, because it is, well, over. In the same way you don’t often see marches protesting against the National Front because, as far as I know, that organisation is defunct. It’s even been a while since I’ve seen a ‘Britain out of the EU’ protest, probably because we have now left the EU.

But the London streets are full of noisy protests by people who think this country should bankrupt itself in the cause of preventing climate change, even though the Government has already decided to do exactly that.

My favourites are the women who caper about in spidery red outfits, now looking even more thrillingly exotic thanks to their facemasks. Then there are the ones who gather round hunks of broccoli, doing who knows what. And there are the people who glue their bottoms to the street.

Now that the Government’s wild over-reaction to Covid has squeezed the life out of London, they all do much less serious harm than they used to.

But the problem is that they have got what they want. Both the major parties, especially the Tories, have entirely swallowed the green pill. The Prime Minister and Greta Thunberg are as one.

Last week, as if to symbolise this, the majestic coal-fired power station at Ferrybridge in Yorkshire was actually blown up so it could never be used again. This makes no practical sense, and seems to be a sort of religious sacrifice. For, as its chimneys fell, many more bigger and dirtier new coal-fired power stations rose to replace it in China and India. 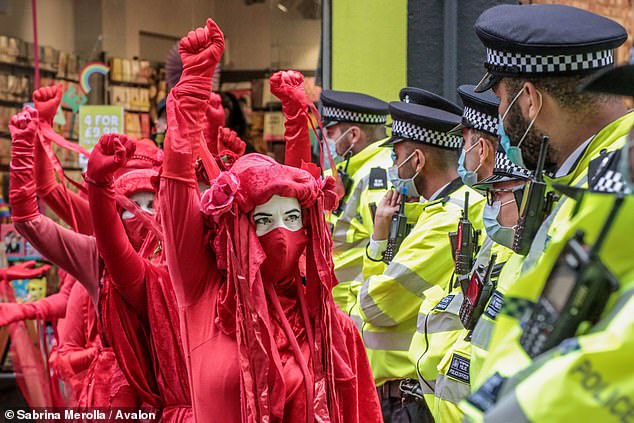 My favourites are the women who caper about in spidery red outfits, now looking even more thrillingly exotic thanks to their facemasks. Then there are the ones who gather round hunks of broccoli, doing who knows what. And there are the people who glue their bottoms to the street

This fact makes the action quite meaningless – except in the amount of pain it will cause us when the National Grid goes wonky, as it will, the more it relies on wind and power sucked in from abroad.

By law, Britain is now committed to a series of similar colossal acts of economic self-harm, stretching over the next 30 years, in the confident belief that by doing so we will save the planet.

As someone who isn’t wholly convinced that they have this right, or that the measures they plan will do any good, I have now reached the stage when I no longer care. Arguing with zealots is a waste of energy, so I don’t bother.

By the time we are all freezing in unheated homes and stranded by power cuts and flat batteries, I shall be dead or in a care home, so I have decided to laugh at it. Because it will happen. In which case, if that is what you want, why now glue your buttocks to the road to protest, or engage in broccoli worship? Why do these things to demand what you already have?

You’d be far better off using the time and energy assembling a secret stock of firewood to see you through the chilly times to come.

A feminist commissar last week condemned Judith Kerr’s lovely children’s book The Tiger Who Came To Tea. Rachel Adamson said it ‘reinforces dangerous gender stereotypes which in turn reinforce gender inequality’. This was bad because ‘boys who conform to gender stereotypes are more likely to become perpetrators of violence against women and girls’.

Many giggled. But I did not, because I predict political correctness will have its way, as it usually does. Modern children’s books are carefully monitored for offence against the new elite – see how few of them feature two-parent families, for instance, lest they upset those with one parent.

Before long the book will be corrected, to become The Tigress Who Came To Tea. Instead of drinking all the water in the tap and eating all the food, she will lecture everyone on the wickedness of the patriarchy. And the father, who in the original takes the family to a cafe, will be written out of the story because he is a masculine stereotype.

The wicked tabloids won hands down (not totally thanks to me), and I suspect this is why all trace of the show disappeared.

But it has now equally mysteriously surfaced again (a link is on my blog) and you can once more watch us all make fools of ourselves, monitored by a youthful Jeremy Paxman, who was far more lah-di-dah then than he is now. 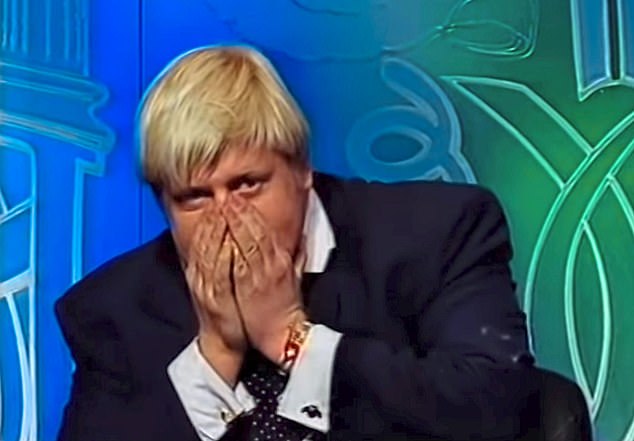