Peter Jones has made fortunes for dozens of people, now he’s offering his expertise to all online

A perfect boiled egg without the need for boiling water, an ingenious strap for hiding those unsightly cables, a magic device for eliminating soggy pizza bases… just some of the pitches Dragons’ Den has seen in its nearly 17 years, although not all have gone on to make their inventors millions.

Be they brilliant or bonkers – and sometimes a combination of both – the problem is turning those ideas into reality, although you can’t accuse people of not trying. Entrepreneur Peter Jones has heard all kinds of proposals from his perch in the Den, where he’s been in place since the show’s first outing on the BBC in January 2005.

‘Being a Dragon as long as I have means I’ve probably heard more business pitches than anybody else in the world – certainly on television,’ he laughs. ‘So I know what a good one is… and what a bad one is.’

There’s also the small fact that he’s been extremely successful in his own right: today, aged 55, he is worth an estimated £500 million, has properties all over the world and runs his own investment company. But while most of us can only dream of such riches, Peter does believe that there’s a little entrepreneur lurking inside all of us, if only we would let them out.

Peter, who had not even £20 to his name at age 28, is now worth an estimated £500 million and has properties all over the world. Pictured: Peter and his partner Tara in their garden

‘There used to be a belief that you were born an entrepreneur, that not everybody can become one, which I’ve thought is absolute rubbish,’ he says.

‘You can be taught to be enterprising. It doesn’t mean you have to start a business – you can be an entrepreneur within a business, even working for others.’

It’s one reason why in 2005 he set up The Peter Jones Foundation, a charity to support the advancement of education in young women, particularly through the teaching of enterprise and entrepreneurship.

He followed that four years later with an Enterprise Academy, and given the way that teaching has pivoted online in these troubled times it was perhaps a natural progression to launch an online course he calls a ‘toolkit’ for business success.

Part of the BBC’s Maestro series, which has seen everyone from author Julia Donaldson to chef Marco Pierre White share their secrets, Peter’s course offers up more than three and a half hours of advice, tips and motivation for budding businessmen and women who have an idea and are just not sure what to do with it. That means everything from drawing up a business plan, pitching for investment and the art of negotiation.

‘There’s always a temptation to focus on winning,’ he says of the latter. ‘But actually, finding out from the other person what they’d really want and then filling that gap is important.

‘So, if you reframe your negotiations to see it as starting a partnership where you have both won something, then all of a sudden it’s a very different relationship and I guarantee it will be more successful later on.’ 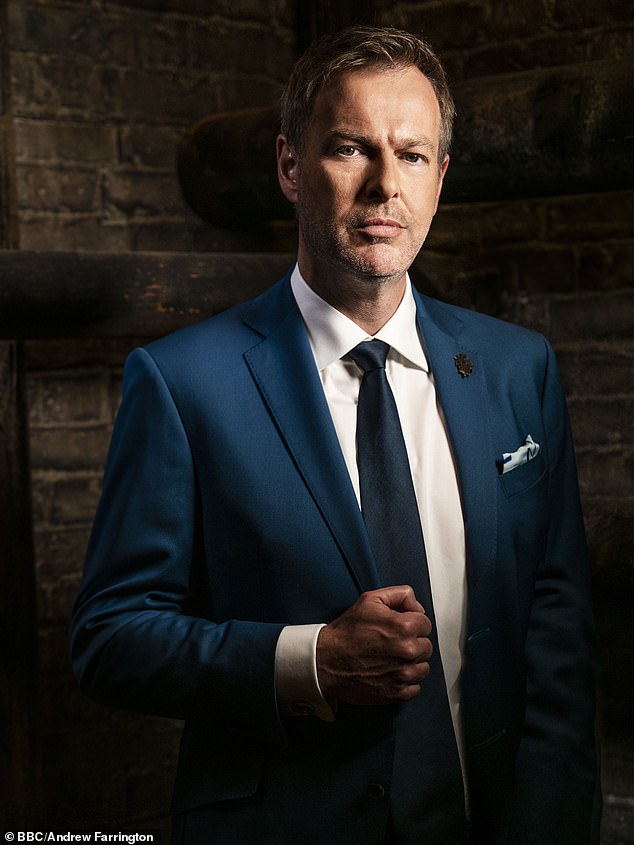 Peter Jones, 55, (pictured) from Maidenhead, who has been on Dragons’ Den since it began airing in 2005, is offering advice for budding business people

As for pitching well, it’s safe to say that while short and concise is always good – the so-called elevator pitch – it’s also important to think who you’re pitching to. ‘Knowing your audience is really important,’ he says.

‘Who are you pitching to? Have you worked that out? If I’m pitching to a man or woman on the street then it should be very different to if I was pitching to my bank manager.’

If only some of those who step out of that now famous lift in Dragons’ Den would take some of that advice to heart. ‘You never know what you’re going to hear – we literally hear it at the same time as the viewer, and that’s the beauty of it,’ he says.

Peter’s lockdowns were spent with his family at their home in Buckinghamshire. ‘I felt like I was literally in Groundhog Day for many, many months,’ he says.

‘The alarm would go off, I’d get out of bed, I’d walk downstairs and then literally I’d stay on the screen for eight or nine hours, occasionally taking breaks for lunch, and then I’d go back up, watch a bit of television and go to bed again. That cycle was strange. For months I felt like I was living in a business computer game.’

Cheeringly, even the ever-dapper Jones adopted the ‘zoom-wear’ trick of wearing a shirt with his pyjama bottoms. And he believes there’s been an unlikely bonus.

‘The working from home thing has meant more people are going it alone,’ he says. ‘Because people have thought, ‘Do you know what, if I can work from home and I can do this, I could do this on my own. I can start something…’

Covid forced Peter to adapt his own business too. ‘Everything shifted online so quickly,’ he says.

‘It’s almost like what we were planning to do in our businesses for about five years to come has happened all in one year. I know there’s been some stuff that’s been really hard, but ultimately I do think that change is a really good thing.’

At 16 years and counting, Peter is now the show’s elder statesman. He’s seen assorted other Dragons come and go, and is nearly 30 years older than the show’s newest – and youngest – recruit, social media company millionaire Steven Bartlett, who joined aged 28.

‘I did wince a bit when Steven told me he’d been watching me since he was 12,’ says Peter.

Longevity certainly hasn’t withered his enthusiasm for the show though: ask him if he’s ever tempted to kick it into touch and he’s resolute. ‘Honestly, I think if you cut me in half you’d find Dragons’ Den running through me,’ he says.

‘I still love it. Every series we start, as soon as those lift doors open, I still get a fluttering sensation in my tummy.’

Perhaps fuelled by furlough, or simply people having a bit more time on their hands, applications for the show have gone ‘through the roof’ during the pandemic.

‘Everything people have gone through has been a bit of a fire starter for enterprise,’ he says. ‘That and having a little bit more to drink as well in lockdown!’

Whatever does he mean? Well, Peter is a firm believer that wine and pints go hand in hand with the nation’s sense of industry. ‘Most of us have grown up in pubs one way or another, haven’t we?’ he muses.

Born in Maidenhead, Peter was always determined to go his own way, setting up his own tennis academy at 16, followed not long after by a cocktail bar in Windsor and then a computer business.

He started his first major business aged 21, providing services and computers to corporate clients, only to lose everything he’d built during the recession of the early 90s when several customers who owed him money went bust.

‘It was a dark and lonely place, and that feeling is not a good feeling. But what you have to do is actually think about the things that you’ve learnt. It’s a genuine golden nugget in business, but something that people find very difficult to do.

‘As far as I’m concerned no one fails in business. You have things that aren’t successful and don’t work out, but it’s all feedback.’

By 1998, still just 32, Peter had got together enough money to launch a telecommunications firm and was back on his feet. Failure certainly feels like a long way away today. 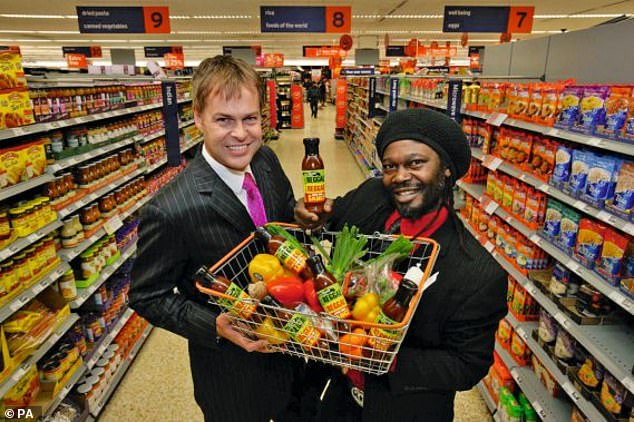 Pictured: Peter with Levi Roots, who went on Dragons’ Den in 2007 and wooed Peter with his Reggae Reggae sauce. Peter invested and Roots is now worth a rumoured £45 million

Clad in a crisp shirt, tanned and lean, he looks like the glossy epitome of success, not to mention around 15 years younger than his real age. He’s a good advert for workaholism, for Peter is the first to admit that he’s not one for switching off his phone.

‘People go on about work-life balance, but I just don’t see things that way. For me working is just part of my life, it’s something I’ve got to just accept, so I don’t sort of switch off,’ he says.

‘I’m not one to go and switch my phone off for two weeks and not be in contact with anybody. When I’m away I’ll still be taking emails, replying to people.’

Ever pragmatic, Peter says he’s long accepted that in life you can’t have it all. ‘There are disadvantages to my approach because it will take you away from spending some moments in time, or some quality time, but I think there’s a balance.

‘It’s providing a lifestyle. I live my life with purpose, but I’m also enjoying the trappings of everything that’s going on around me.’

‘Ultimately I want them to be happy, whatever they’re doing,’ he says. Two of them seem to have inherited their father’s passion for business: William currently works for Peter’s investment group, while Natalia has been work-shadowing her dad in recent months.

‘She sits there quietly, watches, observes, and that’s exactly the right thing, just taking it all in,’ he says. ‘And then she’ll just come out of left field and say something or spot something that I’ve missed.’

No Maestro course needed for her, it seems – although having a multi-millionaire TV Dragon for a dad must feel like quite something to live up to.

‘I’ve not asked them about that, but I imagine the pressure from outside is probably there, isn’t it?’ he muses.

‘But if they ever mentioned it, I would probably take them back to that warehouse floor without even £20 to my name. I probably do set a bar – but I have no expectation that the bar has to be reached or exceeded.’