Car Share viewers were left in tears on Monday night as the final episode revealed John and Kayleigh finally got together – but many were upset they didn’t kiss.

Fans of the BBC show said the final ever episode was the ‘perfect ending’ to the BAFTA-winning series.

Viewers had been left dismayed at the end of series 2 when John refused to say he loved Kayleigh, played by Sian Gibson, when she finally admitted her true feelings for him.

Happy ending? It has be a case of will-they-won’t-they during two hilarious seasons of Peter Kay’s Car Share for the two main characters

Fans even set up an online petition demanding a new ending and they will have been happy now its two main characters appear to have become a couple in a special new finale.

John and Kayleigh were seen holding hands on the back of bus, in the last ever episode of the hit show, after a row where the door of his red Fiat 500 car was knocked off.

The last scenes saw John and Kayleigh listening to music together on a bus after John’s car got towed. Kayleigh then rests her head on John’s shoulder.

‘Oh loved it! So glad they’re together. Perfect ending,’ said one thrilled fan on Twitter. 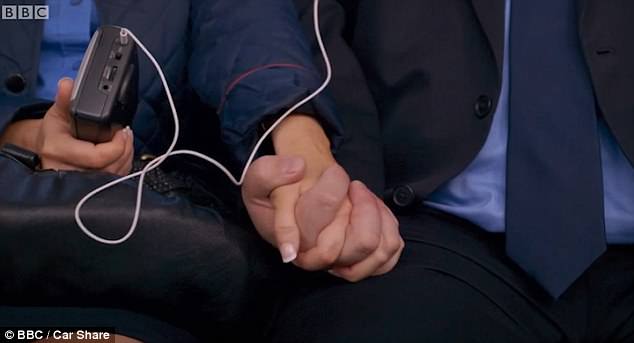 Hope for the future: However John and Kayleigh, played by Peter Kay and Sian Gibson, finally suggested they might have a romantic future together by holding hands on the back of bus, in the last ever episode of the hit show

‘#CarShare thank you. Grown man crying and chuckling at the same time. Together Forever FM,’ said another.

‘Thank you for giving this amazing programme …And the fabulous Kayleigh and John the ending it should have,’ said another.

But while fans were happy with the episode, many are now calling for a Christmas special or a wedding episode.

‘I’m sure the wedding could be the real finale,’ suggested one viewer. 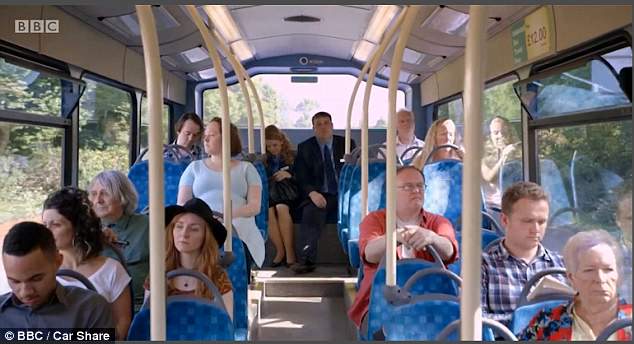 Emotional: The duo ended the episode at the back of a bus, instead of sharing the car 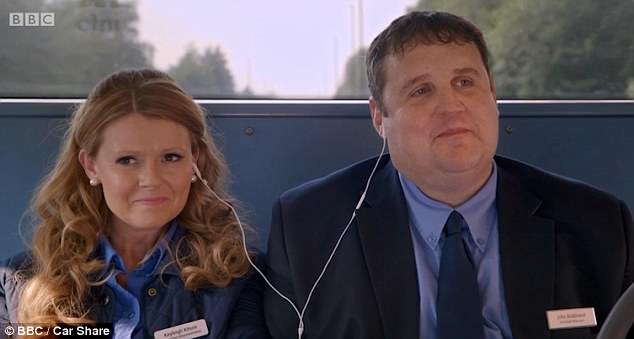 Previously: The last ever instalment followed on from a dramatic penultimate episode which saw Kayleigh confess her feelings to John, much to viewers delight after weeks of waiting

Another said: ‘Now listen. I’ve already got my wedding outfit ready @Sianygibby @peterkay-co-uk and that’s not how I expected it to end! One more series just so I don’t have to hunt for the receipt eh?!!’

Car Share has been yet another hit for comedy superstar Peter, who has disappeared from the public eye and cancelled his stand up tour due to ‘unforeseen family circumstances’.

A petition was signed by more than 10,000 people calling for a third series to be made but fans are set to be disappointed.

Kay told the Radio Times: ‘That is incredibly flattering. 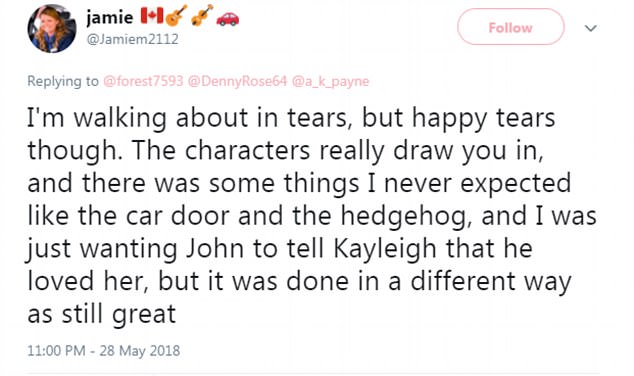 High praise: Fans praised the episode saying that it included some unexpected turns

‘We always knew the second series would end that way and we thought people might be a bit miffed, but never thought they would be so devastated.’

He added: ‘We decided to write another episode that hopefully gave the characters a resolve, and I thought, let’s hold this back until the repeat of the second series.’ 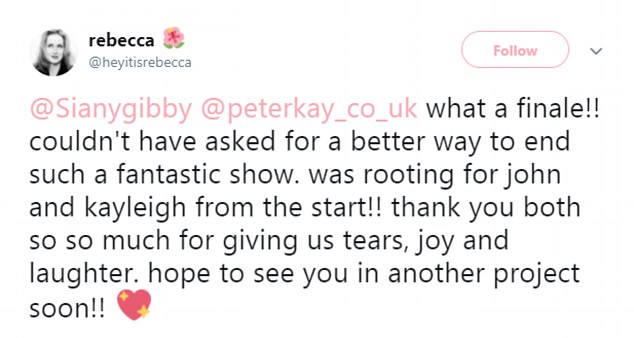 ‘What a finale!’ Emotional fans took to Twitter to claim that the ending had left them ‘sobbing’ despite it being a cliffhanger

And they have been left happy as last night’s new – and final – episode of the BBC show suggested that the car share friends became a couple.

During a recent discussion about whether there would ever be another installment, Gibson teased: ‘Never say never.’

However, regardless of whether they do film more episodes, the duo hinted they would be teaming up for another project.

Asked if they would be working together again, Kay said: ‘Hopefully.’

‘Gutted’: Car Share viewers expressed how much they will miss John and Kayleigh

Although Monday’s final episode ended on a cliffhanger, some fans thought it was enough to imply that the two lovable characters were set for a happy ending.

The last ever installment followed on from a dramatic penultimate episode which saw Kayleigh confess her feelings to John, much to viewers delight after weeks of waiting.

Fans have hoped that the unlucky-in-love duo would make a go of it ever since they began car sharing to work at a supermarket everyday.

However, when Kayleigh told John she was in love with him in the previous episode he dashed her hopes by making excuses.

Heartbroken Kayleigh then stormed out of the car and into a taxi, giving fans a taste for the happy ending, a dream sequence showed John chase after her – climbing on top of cars as he went.

John pulled Kayleigh into his arms for a smooch, however moments later he was back in his car looking downcast as the sequence ended. 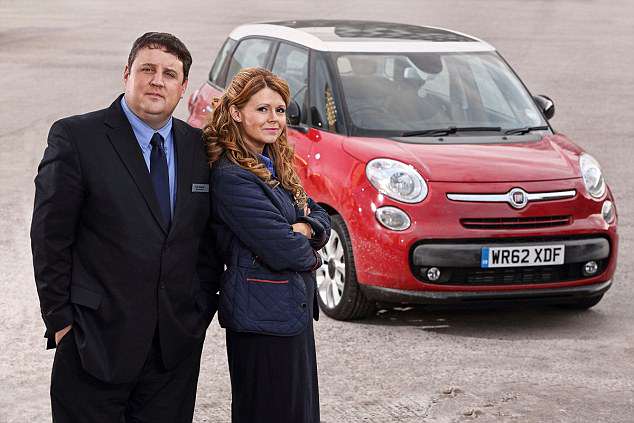 The final episode began with John and Kayleigh back in his Fiat on the way to work and it appeared that any differences had been solved.

But disaster struck when Kayleigh hopped out of the car to rescue a stranded hedgehog and while doing so John’s car door was struck off.

After the accident they had to resort to riding the bus home where Kayleigh got out a walkman and offered Peter a headphone to listen.

As the episode drew to an end Kayleigh rested her head on his shoulder as they held hands.

Emotional fans took to Twitter to claim that the ending had left them ‘sobbing’ despite it being a cliffhanger.

One teary viewer wrote: ‘Omg!!! Last episode of @BBCOne #CarShare!!! It was amazing as always, cried so much! #johnandKayleigh finally!! @peterkay_co_uk @Sianygibby x’

Another added: Oh #CarShare had me sobbing that song will forever be stuck in my head haha oh John and Kayleigh I love you x

While another added: ‘@Sianygibby @peterkay_co_uk what a finale!! couldn’t have asked for a better way to end such a fantastic show. was rooting for john and kayleigh from the star!! thank you both so so much for giving us tears, joy and laughter. hope to see you in another project soon!! 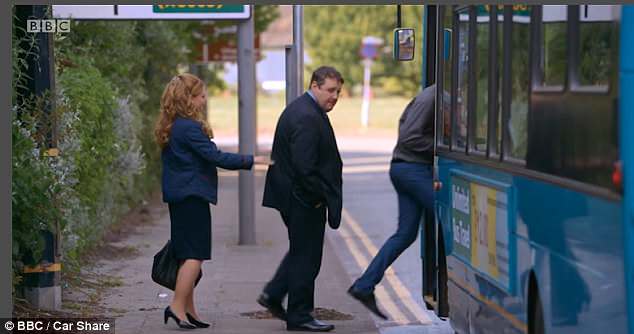 Emotional: In the end, the duo were seen boarding a bus together – but many were disappointed they didn’t kiss