Nearly 50,000 people have signed an online petition asking for the removal of a statute of retired Baltimore Ravens star Ray Lewis after he joined other NFL players kneeling during the national anthem before Sunday’s game in London.

Ravens fan Eric Moniodis’ petition on change.org says the anthem honors the United States and its veterans. It reads: ‘To kneel during it is disrespectful, regardless of what you are protesting.’

Lewis said on ‘Inside the NFL’ that he prayed while he knelt to ‘simply honor God in the midst of chaos.’

‘I want the Ray Lewis statue at Ravens Stadium removed because of his refusal to stand during the National Anthem,’ Moniodis’ petition read. ‘That song honors our country and our veterans who fought for it.

‘To kneel during it is disrespectful, regardless of what you are protesting,’ he continued. ‘I will not stand for that kind of disrespect towards our country, especially from a legend such as Ray Lewis. You stand for the National Anthem as a salute to those who can’t stand because they fought for this land.’ 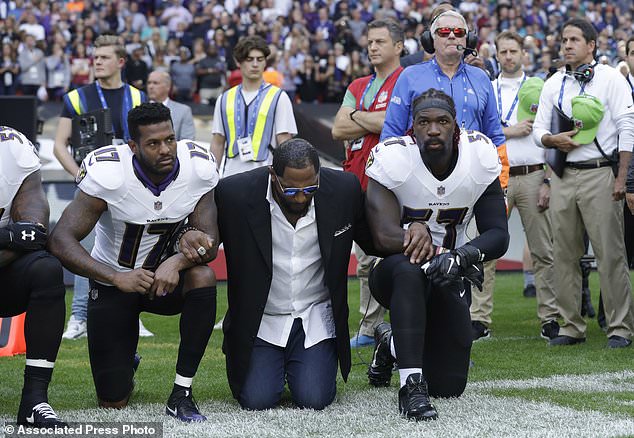 A Maryland Stadium Authority spokeswoman told The Baltimore Sun extra security has been added to M&T Bank Stadium, including the plaza where Lewis’ statue is located.

‘There is additional security at the statue plaza at this time,’ Rachelina Bonacci told the Sun. ‘Certainly observers can notice the presence of uniformed security officers at M&T Bank Stadium, which includes the statue plaza. The additional officers and other security enhancements have been in place since Sunday afternoon.’

Lewis had previously been critical of Colin Kaepernick, the former San Francisco 49ers quarterback who initiated the protests during the 2016 season. 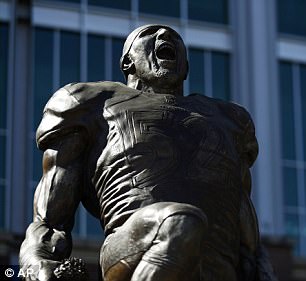 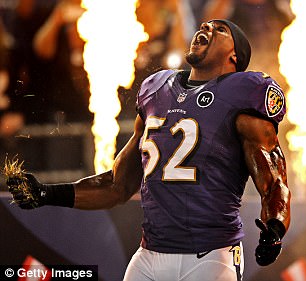 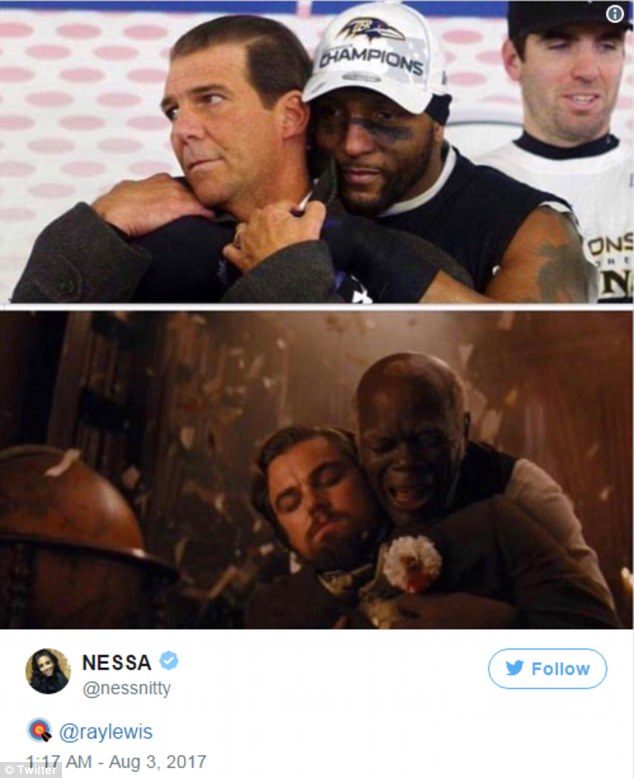 Ray Lewis has claimed the Baltimore Ravens chose not to sign Colin Kaepernick because his girlfriend posted this ‘racist’ tweet featuring owner Steve Bisciotti. Nessa Diab posted a tweet comparing a picture of Lewis hugging Bisciotti to a scene from Django Unchained

During a broadcast of Showtime’s ‘Inside The NFL,’ Lewis insisted that Kaepernick wasn’t signed by the Ravens before the season because of a tweet Kaepernick’s girlfriend, MTV host Nessa Diab, posted about himself and team owner Steve Bisciotti.

The post compared a picture of Lewis hugging Bisciotti to a scene from Django Unchained, where Samuel L. Jackson’s house slave character held Leonardo DiCaprio, who was playing a plantation owner.

‘When me and Steve Bisciotti were talking… [w]e were talking about giving this kid an opportunity to get back in the National Football League,’ Lewis said. ‘Look, this is what I wanted to share with people. I have been fighting for this kid behind the table like nobody has … I’ve never been against Colin Kaepernick. But I am against the way he’s done it.

‘Then, his girl [Colin Kaepernick’s girlfriend] goes out and put out this racist gesture and doesn’t know we are in the back office about to try to get this guy signed. Steve Bisciotti has said it himself, ‘How can you crucify Ray Lewis when Ray Lewis is the one calling for Colin Kaepernick?’ 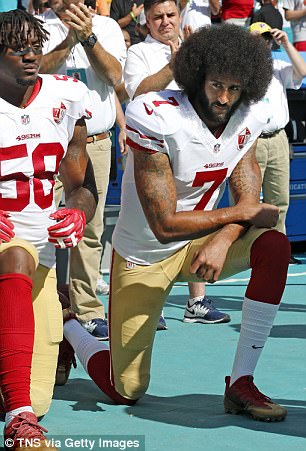 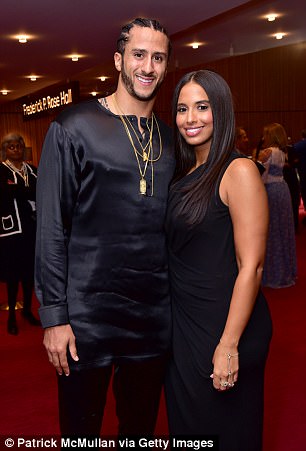 Colin Kaepernick (No. 7 on the left) began protesting police violence against minorities in 2016. His girlfriend (right with Kaepernick) MTV host Nessa Diab, criticized Lewis on Twitter