Gould, the general manager of football at the Bulldogs and a close friend of Stuart,  also revealed the pair have spoken about what unfolded last Saturday and that the Canberra coach admitted his emotions got the better of him.

When Stuart was quizzed by journalists about an incident involving Salmon in the Raiders’ 26-6 loss to the Panthers, where the five-eighth kicked Tom Starling in the groin, the veteran coach unloaded.

The NRL is expected to fine Stuart $20,000 for his outburst once they conclude their investigation and he could also be suspended for two Canberra matches. 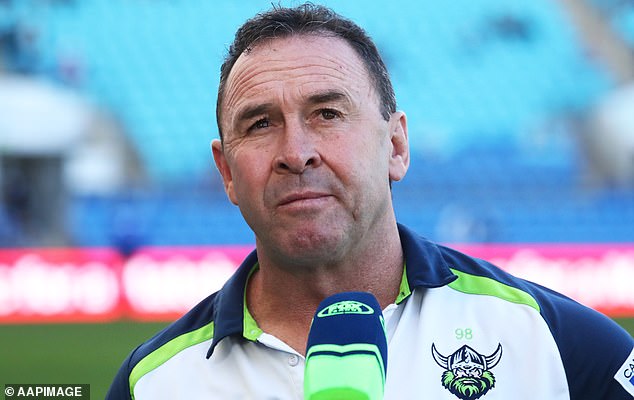 ‘Naturally, people will be curious now as to what motivated it and why Ricky snapped the way he did — and he did snap,’ Gould said on Channel 9’s 100% Footy on Monday night.

‘He said (to me), “I didn’t know that was going to come out at all”. It wasn’t pre-meditated, but the sheer mention of his name (Salmon) brought back bad memories and all of a sudden the words were out before he could take them back.’

Gould added that ‘whatever the decision of the NRL, naturally people and the media are going to be very curious as to what motivated it, what was the history. Everyone’s going to try to delve for that story.

‘And let me tell you: that’s not going to do anyone any good whatsoever.

‘So, I would hope that with the NRL decision…for which Ricky is quite ready and prepared for whatever decision comes — I would like to think that is the end of it and no one else opens their mouth.’

Stuart is no stranger to a tirade, much to the chagrin of the NRL.

‘We will follow the correct procedures and let the NRL complete a thorough investigation.’ 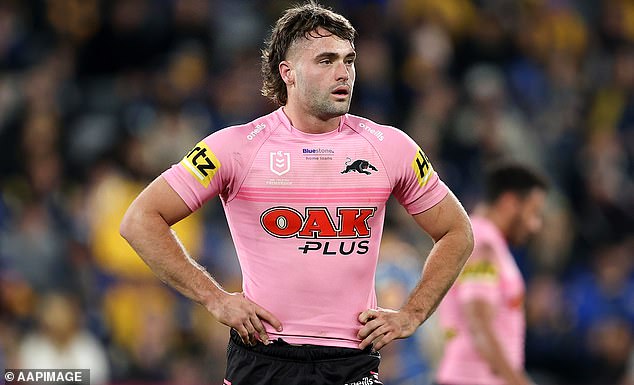 The Salmon family released a statement on Sunday evening imploring the NRL ‘to take action’, condemning the strong remarks from Stuart

‘Ricky Stuart has been coaching in the game for 20 years…absolutely disgraceful comments.’

Panthers teammates are rallying around the ‘rattled’ Salmon, who is standing in for the injured Jarome Luai.

Salmon’s close friend and halves partner, Sean O’Sullivan, said the side was wrapping their arms around him.

‘We spoke to Jaeman after the game and I think he was a little rattled by it. But we all know the type of person Jaeman is and we love him on-and-off the field. Everyone in the organisation is supporting him,’ he told Channel 9.