A bus collided with a van carrying pilgrims to Christmas Mass in the Philippines on Monday, in a horrific crash that left at least 20 people dead – including a five-month-old baby.

More than 24 people were also injured in the collision that took place in the northern Philippines’ Agoo town in La Union province.

Police Chief Superintendent Romulo Sapitula said all those killed in the morning crash in were in the van – including its driver.

The crash between a bus and a jeepney (pictured) took place in the northern Philippines as pilgrims were on their way to Christmas Mass, 20 died including a five-month-old baby

The van involved is known as a jeepney and ais the most popular form of public transport in the country.

Another 10 jeepney passengers were injured, along with the driver and 17 other occupants of the bus.

However, no one from the bus was killed, reported Reuters.

The jeepney’s engine was ripped off due to the impact of the crash.

The passengers were bound for Our Lady of Manaoag, a Roman Catholic church in northern Pangasinan province that is popular among pilgrims and Catholics praying for the sick and impoverished, police said.

The jeepney allegedley drove into the opposite lane of the highway to overtake vehicles before it collided head-on with the bus on a northern Philippine highway, according to the authorities.

The bus applied its brakes when it hit the jeepney, but it was not enough to avoid a collision. 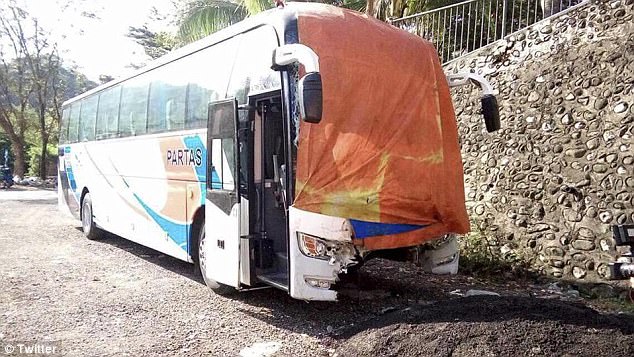 The bus was less damaged than the jeepney with no deaths, although the driver and 17 other passengers suffered injuries

Shocking footage shows the smashed-up jeepney at the side of the road with broken glass strewn everywhere.

Locals can also be seen looking at the aftermath of the crash in horror.

Rickety passenger buses and jeepneys, lack of safety signs, poor law enforcement and reckless driving have been blamed for many road tragedies in the Philippines.

Jeepneys are popular among citizens and the colourful vans are considered iconic.

Under Philippine law, the bus driver may even face charges of reckless imprudence resulting to multiple homicide.

These charges carry a sentence of up to six years.