The Filipino president who regularly makes vile jokes about women, rape, drugs, and the Church has taken another swipe at priests.

Roberto Duterte ‘advised’ women against approaching priests in church, saying: ‘The women should refrain from going near the priests because when you are near him, he will just smell the scent of your body.

‘And if he corners you in the church, you’re in trouble, he will court you.

‘God gave him a penis. What will they do with that?

‘Will they slap it against the door every morning? God was the one who made a mistake there, not us,’ he added.

President of the Philippines, Roberto Duterte, launched a broadside against the Church on the basis priests would ‘court’ women regardless of their vows

Following criticism from the Church against his bloody war on the drug trade, he added: ‘Is there an intelligent priest? They are all stupid.

‘If they aren’t stupid, they wouldn’t enter priesthood,’ Duterte said during the distribution of land ownership certificates in Negros Occidental last Friday.

‘You are a man, but you chose to be a priest. You keep on looking at all the beautiful women that you can’t court. My God.’

He told priests to refrain from criticizing the government in their sermons.

‘The priests shouldn’t overstep their boundaries. You know that they started it first. Tell them that there is a separation of church and state. The sons of b****** attack me in the pulpit using the religion,’ the president said.

‘If you are a priest and you want to attack me, don’t do it in the pulpit because this is the spokesman, the table of the church. Step away from it. ‘I am a priest and I don’t like Duterte because he killed criminals especially the drug addicts. As a Filipino, I am protesting against him.’ The Filipinos have the right to know.’ 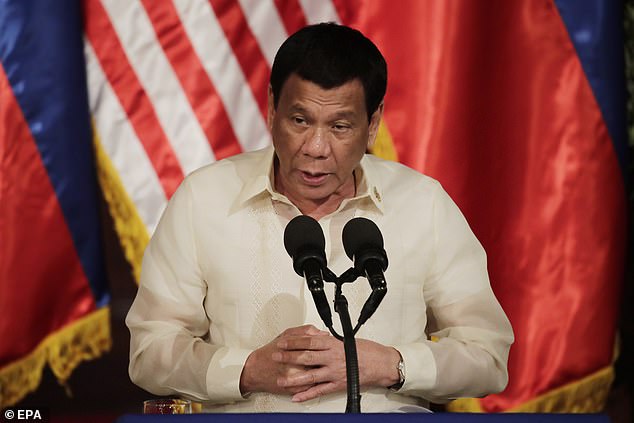 Duterte has a history of unpleasant and misogynistic statements. and recently admitted to sexually assaulting his family’s maid in his youth

The leftist Filipino Gabriela Women’s Party asked: ‘why would women take advice from a self-confessed womanizer and serial misogynist?’

‘The macho-fascist president would be the last person who could give decent advice on how women can stay away from or fight abuse’, the party said in a statement.

It is not the first time Duterte has shared an insight into his worldview, which seems mainly to comprise of the belief that men are animals not responsible for their actions and women should be blamed for sexual offences committed against them.

While running for office, he said of a gang-rape victim: ‘I was angry because she was raped, that’s one thing. But she was so beautiful, the mayor should have been first. What a waste.’

He was mayor of Davao City on the southern island of Mindanao in the Philippines at the time of the statement.

And last August has provoked worldwide outrage when he said: ‘As long as there are many beautiful women, there will be more rape cases.’