This could be the world’s first broken Apple iPhone 8 Plus.

A hapless phone seller in China reportedly cracked a brand new iPhone 8 Plus as he prepared to sell the handset, which goes on sale today in 29 countries.

Pictures have emerged on Chinese social media, which apparently show a gold iPhone 8 Plus with a hole and crack marks on its all-glass back. 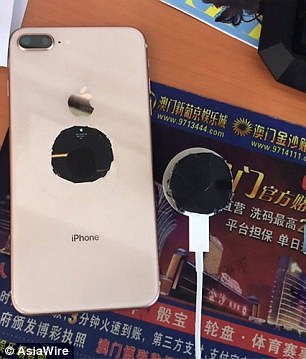 Crack marks can be seen around the anti-theft device that was attached onto the apparent iPhone 8 Plus (left). The hole on the back of the phone left its logic board exposed (right)

– New speakers that are 25 percent louder

The pictures, posted by Weibo user ‘YeJi_mix’ on September 21, show a gold iPhone 8 Plus appearing to have a cracked back.

A circular security tag can also be seen attached to a charging cable.

According to Sohu, the magnetic device broke the glass and left cracks around the phone.

A hole was left in the middle on the back of the phone.

The hole left the new phone’s logic board exposed.

As the official release date of iPhone 8 and iPone 8 Plust are set to be on September 22, Sohu explained that the pictures were taken by a phone seller who was setting up the new phone for display. 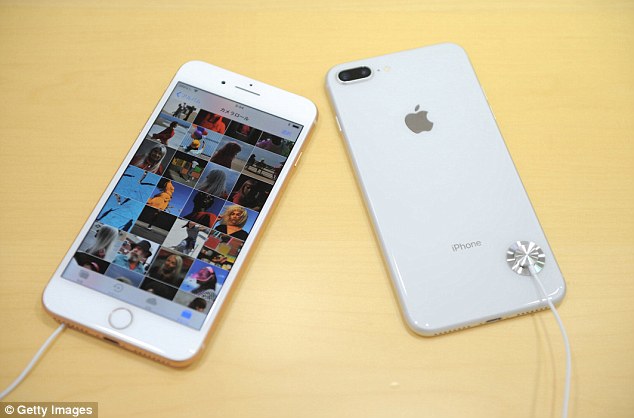 New iPhone 8 plus models are displayed at a telecom shop in Omotesando Avenue in Tokyo, Japan on September 22, 2017. The handsets go on sale today in 29 countries 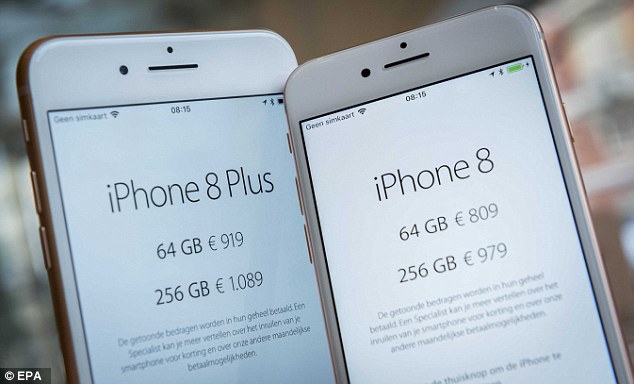 An Apple iPhone 8 (right) and iPhone 8 Plus (left) with their respective prices in Euro currency are displayed at the Apple Store in Amsterdam, The Netherlands, on September 22, 2017

iPhone 8 and iPhone 8 plus – which come with 5.5 and 4.7-inch retina HD screens – have been touted as ‘a huge step forward for iPhone.’

The new devices will be available today and feature front and back glass panels, built-in wireless charging, and the ‘most powerful and smartest chip’ ever in a smartphone.

The devices look similar than the iPhone 7, but have glass on the front and back.

They are available in silver, space grey, and the new gold colour.

Made from aluminium and steel reinforced glass, the new iPhone 8 and iPhone 8 Plus are also sealed to be resistant to water and dust.

Both devices also boast new stereo speakers that are 25 per cent louder than Apple’s previous devices.

Thee new Apple phones are not just beautiful, but powerful as well.

They feature a new A11 Bionic 64-bit chip with two high performance cores that are 25 per cent faster than the A10 chip in the iPhone 7.