”She Has A Plane For That’: Elizabeth Warren and Bernie Sanders’ seating arrangements spawns jokes after photo of them on flight to Miami goes viral

A photo of Elizabeth Warren sitting behind Bernie Sanders on an airplane has gone viral.

Eagle-eyed passenger and The Hill journalist Steve Clemons was mid-flight to Miami when he spotted the two presidential nominee candidates sitting in window seats, one behind the other.

In the photo, Warren appears to be reading something with the window shade pulled down, while Sanders seems to be enjoying the view outside.

The image promptly went viral as people quickly took to Twitter with their own jokes about the politicians’ seating arrangements.

‘She Has A Plane For That,’ wrote OhNoSheTwitnt, riffing off one of Warren’s campaign slogans.

‘Bernie always just one step ahead of Warren,’ wrote @mollyfprince.

‘She looks like she’s just doing her own thing but really, @EWarren is figuring out how to leapfrog @BernieSanders and end up in 14A,’ wrote @toddgillman. 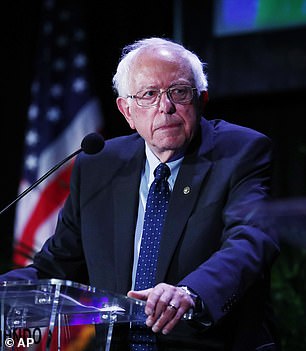 Warren and Sanders were on the flight to Miami, where they were among eight candidates speaking at the National Association of Latino Elected and Appointed Officials Forum Friday 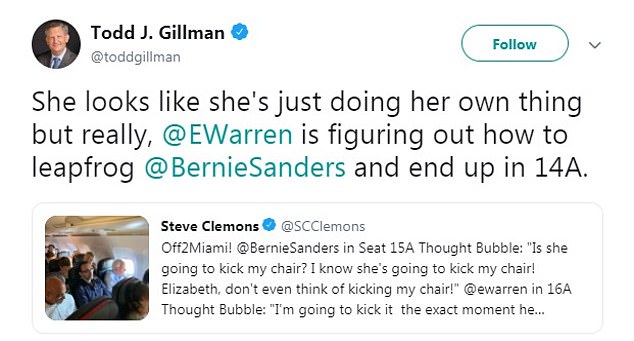 ‘His window shade is up – hers is down. What does this mean????’ @wdcscribe wondered, to which @FierceSnowflake replied, ‘Elizabeth Warren is… throwing shade.’

‘Please note: seating for both on the extreme left,’ pointed out @ArthurLHerman.

Warren and Sanders were on their way to Miami to participate in a forum hosted by the National Association of Latino Elected and Appointed Officials on Friday. They were among eight Democrat candidates who spoke at the event.

The forum precedes the first Democratic primary debate taking place June 26 and June 27 at the Adrienne Arsht Center for the Performing Arts in Miami.