There’s often something in a holiday snap that prevents it from winning you thousands of social media likes – such as a photobombing bystander or an unsightly lamppost.

Or maybe something you personally just can’t bear to look at – an ex-partner, for instance.

But Google offers a solution. Its Pixel 6 Pro has a ‘Magic Eraser’ tool that promises to remove ‘photobombers and unwanted objects’ in ‘just a few taps’. 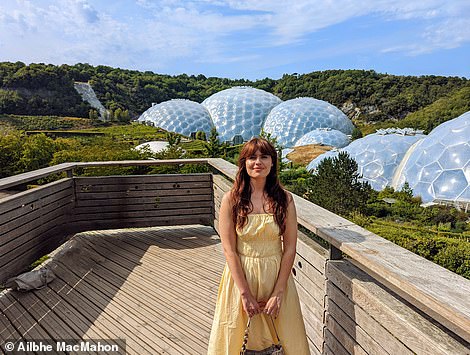 Ailbhe MacMahon (pictured at the Eden Project) tests out the ‘Magic Eraser’ tool on the Google Pixel 6 Pro on a trip to Cornwall. The tool promises to remove ‘photobombers and unwanted objects’ in ‘just a few taps’. In the image on the right, two figures have been removed from the background of the shot 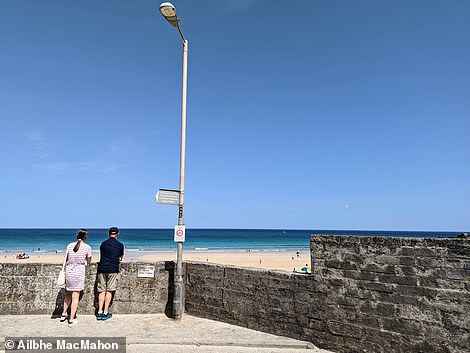 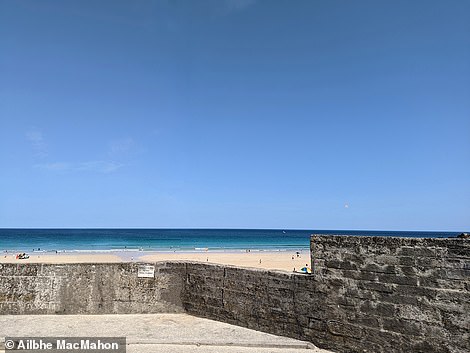 Going… gone: A view of Porthmeor Beach in St Ives cluttered with people and a lamppost (left). A few seconds of magic erasing cleans the scene up (right) 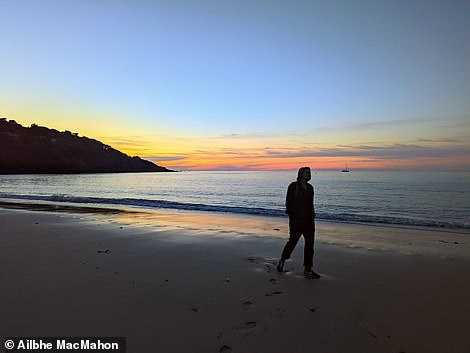 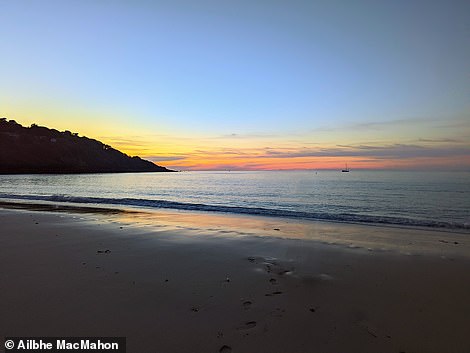 On the left, a silhouetted person strolls along the beach at Carbis Bay as the sun sets. On the right is the same image with the rogue passerby removed, thanks to Google’s wizardry 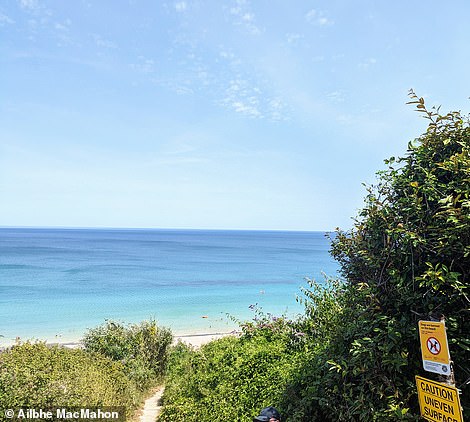 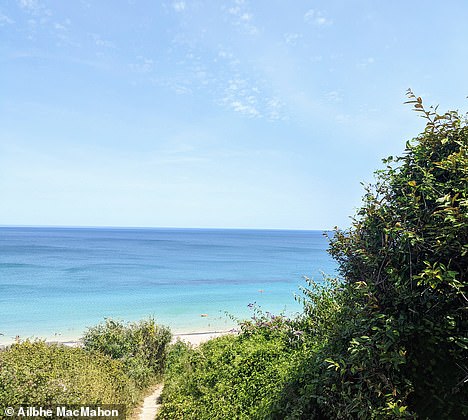 The photographs above show a path leading down to Carbis Bay beach from the train station, with the signs removed from the picture on the right using the Magic Eraser feature 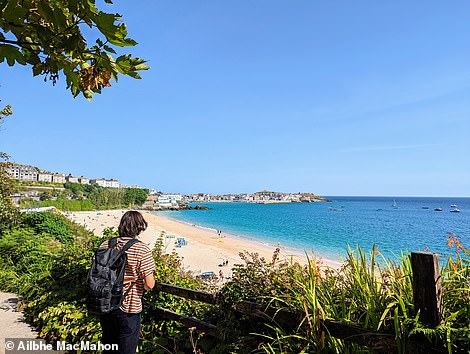 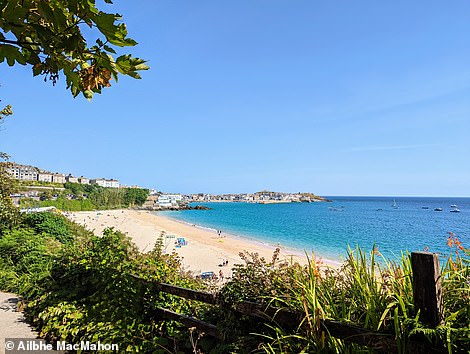 The view of Porthminster Beach from the path that leads from Carbis Bay to St Ives. On the right, the passerby from the original image (left) has been erased with the Google editing tool

We put this feature to the test on a holiday in Cornwall to see if the tool could give our pictures a top-tier travel influencer sheen.

It’s not a new concept, but unlike specialist editing apps or Photoshop software, the ‘Magic Eraser’ is inbuilt into the phone’s photo album, sitting alongside the usual editing tools such as filters and cropping.

We try it out before boarding our train in London’s Paddington Station – when people walk into the frame of a photograph we’ve taken outside the train carriage, Magic Eraser suggests wiping them out. One click and poof, they are gone, leaving their luggage behind. 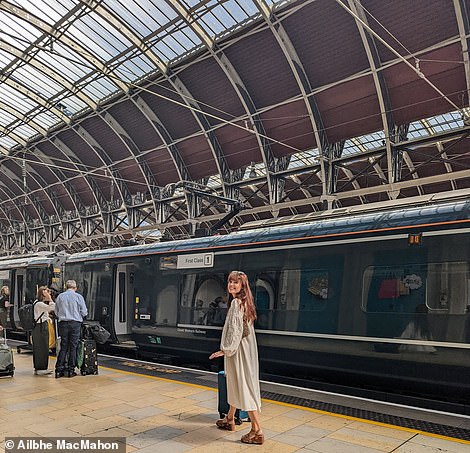 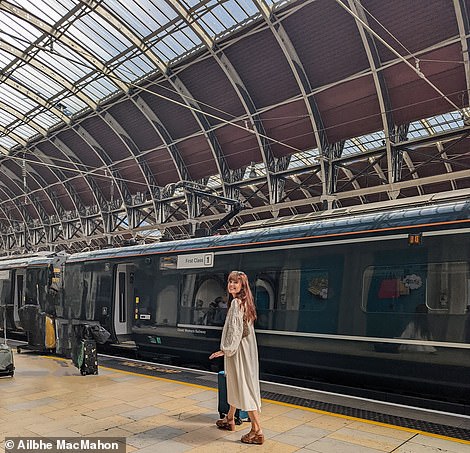 Ailbhe boarding a Great Western Railway train to Cornwall at London Paddington station. On the right, the Magic Eraser has deleted the other train passengers 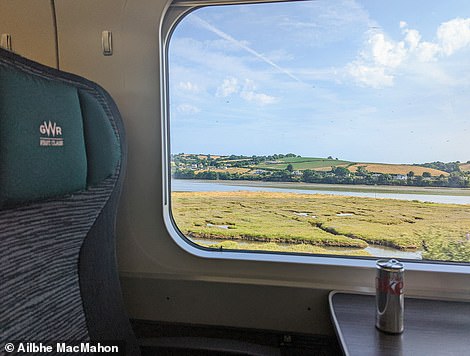 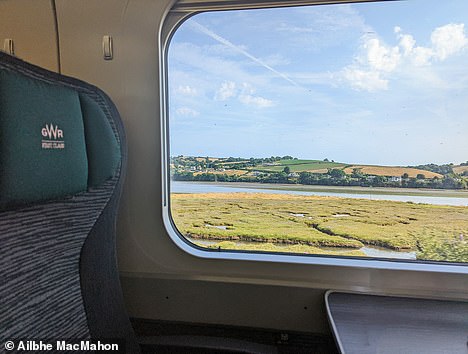 Both images above show the scene outside the train window on the stretch between Exeter and Dawlish in Devon. On the right, the Coca-Cola can has vanished 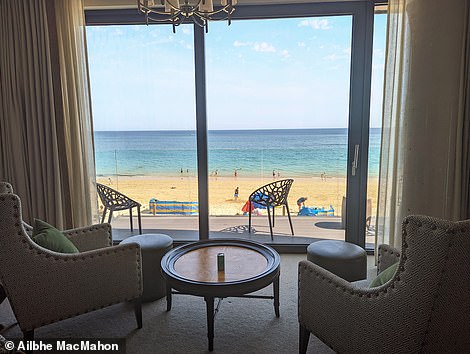 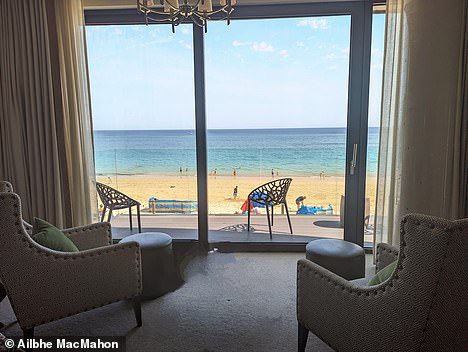 The view from Ailbhe’s guest room at the Carbis Bay Hotel. On the right the coffee table has been edited out of the shot, leaving a ‘shadow’ behind 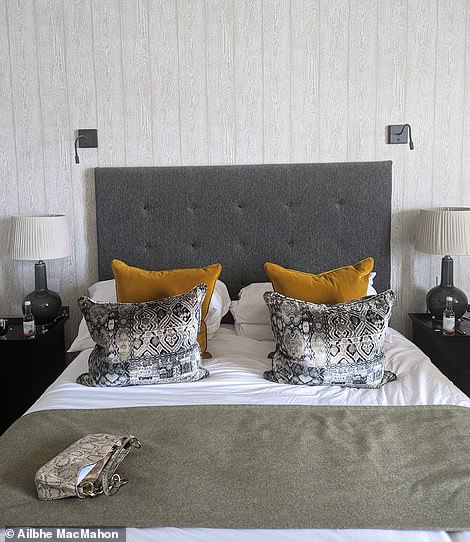 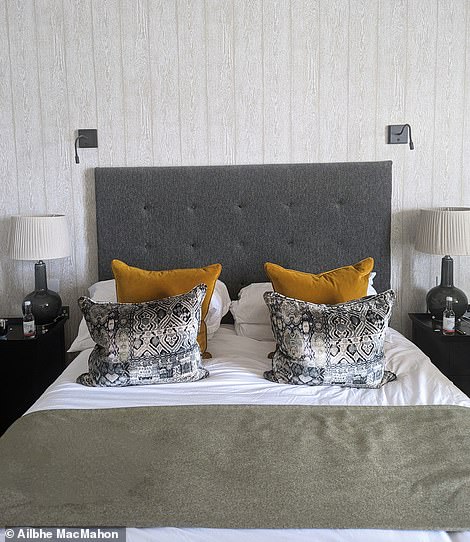 Ailbhe’s guest room at the swanky Carbis Bay Hotel. On the right, her handbag has been erased 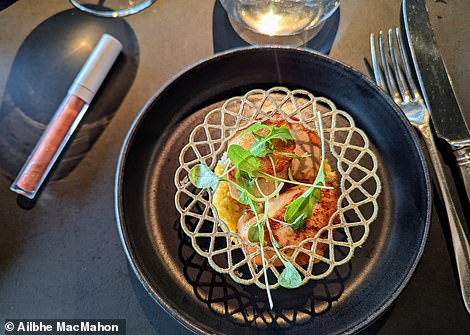 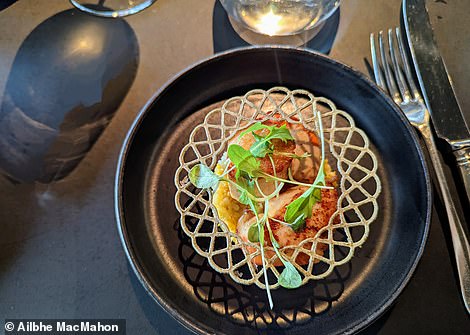 A serving of pan-roasted scallops at Walters On The Beach, one of Carbis Bay Hotel’s restaurants. Ailbhe’s lipgloss has disappeared from the picture on the right hand side thanks to the editing tool

One train journey later and we arrive at the Carbis Bay Hotel, which hosted the G7 Summit last year and lies along the coast from St Ives. The floor-to-ceiling windows of our beachside suite offer too-good-to-be-true views of the sea. Capturing the vista with the phone, we try to remove the suite’s coffee table from the shot – it works but leaves a ghostly shadow behind.

While the beach looks inviting, we spend the afternoon at the hotel’s heated pool, which looks out over Carbis Bay. The scene is peak holiday album material – especially when we eliminate the other swimmers from view with the eraser, making it look as though we have the navy-blue lagoon to ourselves.

The following morning, we follow the path along the coast to St Ives, rubbing out errant lampposts and traffic cones from our photographs as we go. A local tells us that the G7 Summit has drawn more holidaymakers than ever to this pocket of Cornwall, and conditions are ripe for photobombing as we mosey past the crowds to pretty Porthmeor Beach. 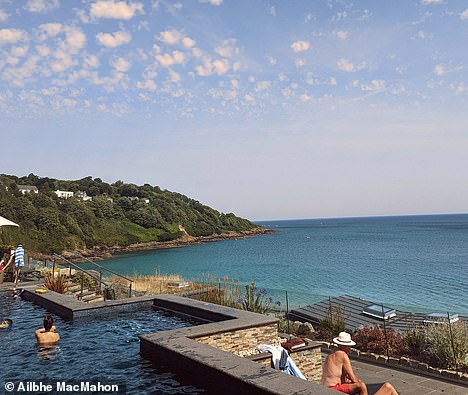 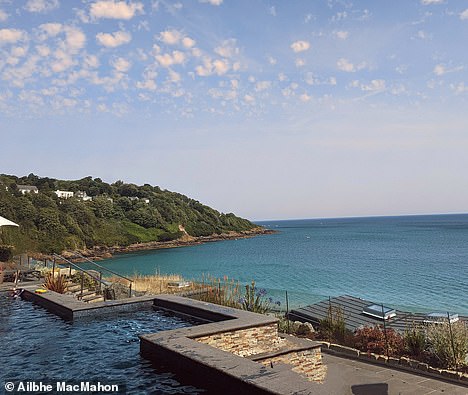 Above is Carbis Bay Hotel’s heated pool, which looks out over the bay. On the right, the swimmers have been removed from the frame 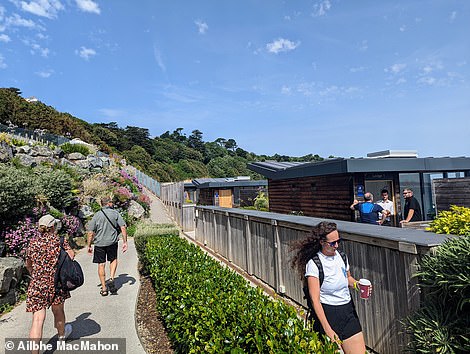 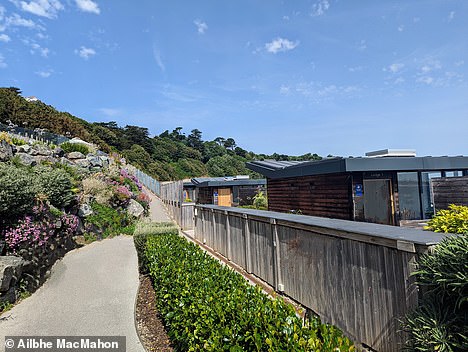 Pictured is the route through Carbis Bay Hotel to reach the path to St Ives, with walkers on the route wiped in the picture on the right 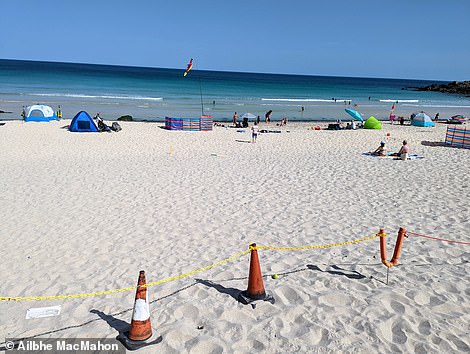 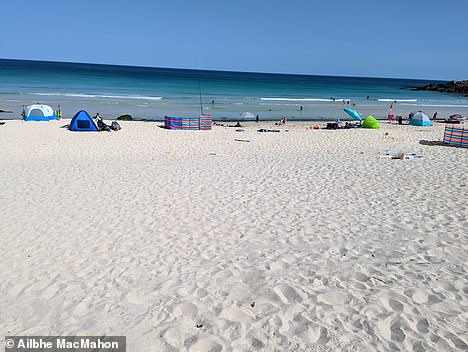 The picture on the left shows traffic cones on Porthmeor Beach in St Ives, while the shot on the right shows the beach once the cones have been erased 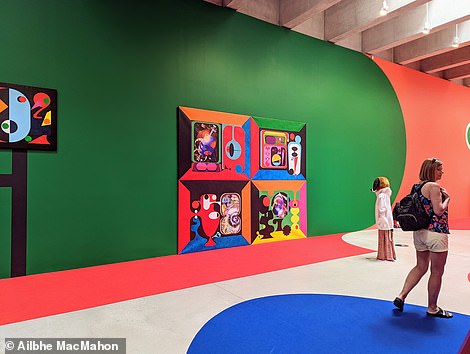 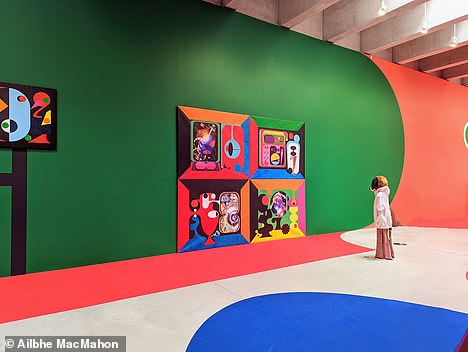 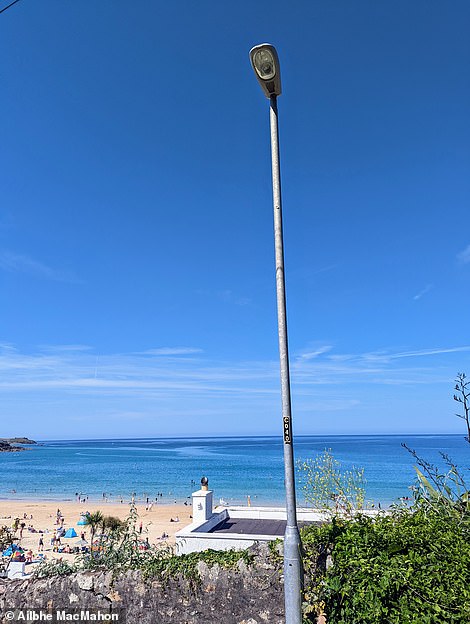 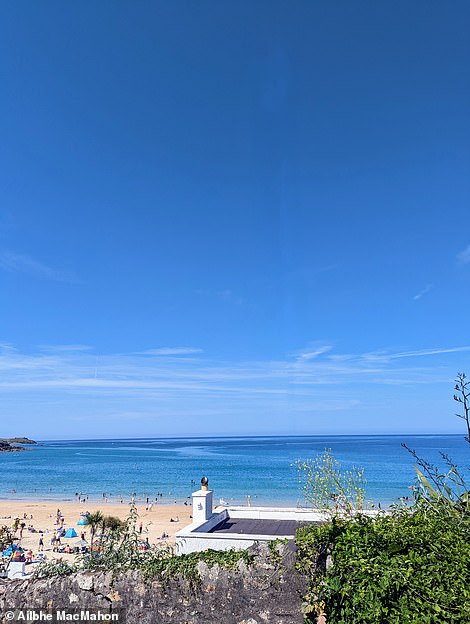 The next stop on our holiday-snap tour is the Eden Project, an eco-attraction where we see the largest indoor rainforest in the world, plus a few soon-to-be-erased visitors.

While our photographs might pale in comparison to that of a bona fide travel influencer – partly because I’m not great at photography in the first place – the Magic Eraser tool has significantly enhanced them. The tool is at its best in sunlight, when objects are positioned against a clear backdrop like a blue sky. Anything with a pattern or a three-dimensional surface behind it can be trickier to erase and creates a slight blur in the shot, but overall, it makes for a far nicer memento of a getaway.

The next day, we make our way to the railway station with one backward glance at the beautiful Cornish coastline. Thankfully, we have plenty of picture-perfect photographs to remember it by.