This is the isolated tribe in Indonesia, where American heir Michael Rockefeller was supposedly murdered and eaten sixty years ago, before they renounced cannibalism and turned to Christianity.

The images offer a rare glimpse of the Grand Valley Dani people, an ethnic group located in a remote part of western New Guinea in Indonesia.

Their ancestors are at the centre of the mystery of the 1961 disappearance of 23-year-old Rockefeller, whose great-grandfather was the co-founder of Standard Oil and established one of America’s wealthiest dynasties, who travelled to New Guinea to photograph the Asmat people and collect their art.

Rockefeller disappeared after a trading canoe that he was travelling in down the cannibal coast of New Guinea capsized while he was collecting the wooden carvings of the Asmat people for his father’s recently opened Museum of Primitive Art.

Several miles off shore, heavy seas swamped his craft. After a night adrift, Rockefeller set out to swim for the distant shore, leaving his companion René Wessing with the fateful words: ‘I think I can make it…’ He was never seen again.

Rockefeller’s death was eventually ruled a drowning, but there have long been questions about the official version of events.

A book published in 2014 by Carl Hoffman claims that there is ‘clear and abundant’ evidence that Rockefeller made it to shore and was killed and ceremonially eaten by the Asmat tribesmen.

Hoffman carried out extensive research in the Netherlands as well as New Guinea researching his book Savage Harvest.

He claims that once Rockefeller made it to shore, the men of the Asmats – a notoriously violent New Guinea tribe – tortured, beheaded and ate Rockefeller in a ritualistic cannibal killing because the Dutch had killed five of their own elite Asmats.

The Dani tribe, another cannibal tribe in western New Guinea, were not discovered until 1938 when they were sighted from an airplane by American zoologist Richard Archbold on an expedition.

One photograph captures a smiling Dani tribe leader covered in silver bodypaint made from ash and pig fat, with a pig rib hooked through his nose – and holding a cigarette.

Another image showed the tribe practising war formations and spear throwing at the Baliem festival, held every August, which unites and celebrates the 25,000 population of the Dani people with other local tribes in the highlands.

The Grand Valley Dani people wield their spears and flags for a Baliem festival ceremony performance, which unites local tribes 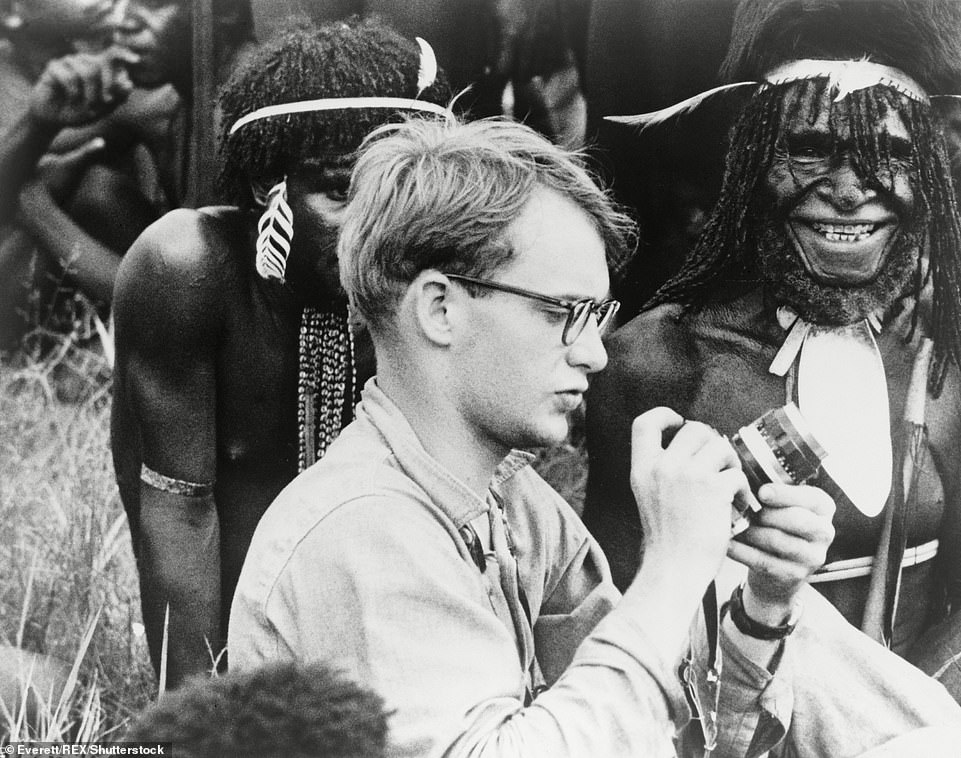 The tribesmen became infamous in 1961 after they were accused of killing and eating Michael Rockefeller, pictured here adjusting his camera in New Guinea with Papuan men in background 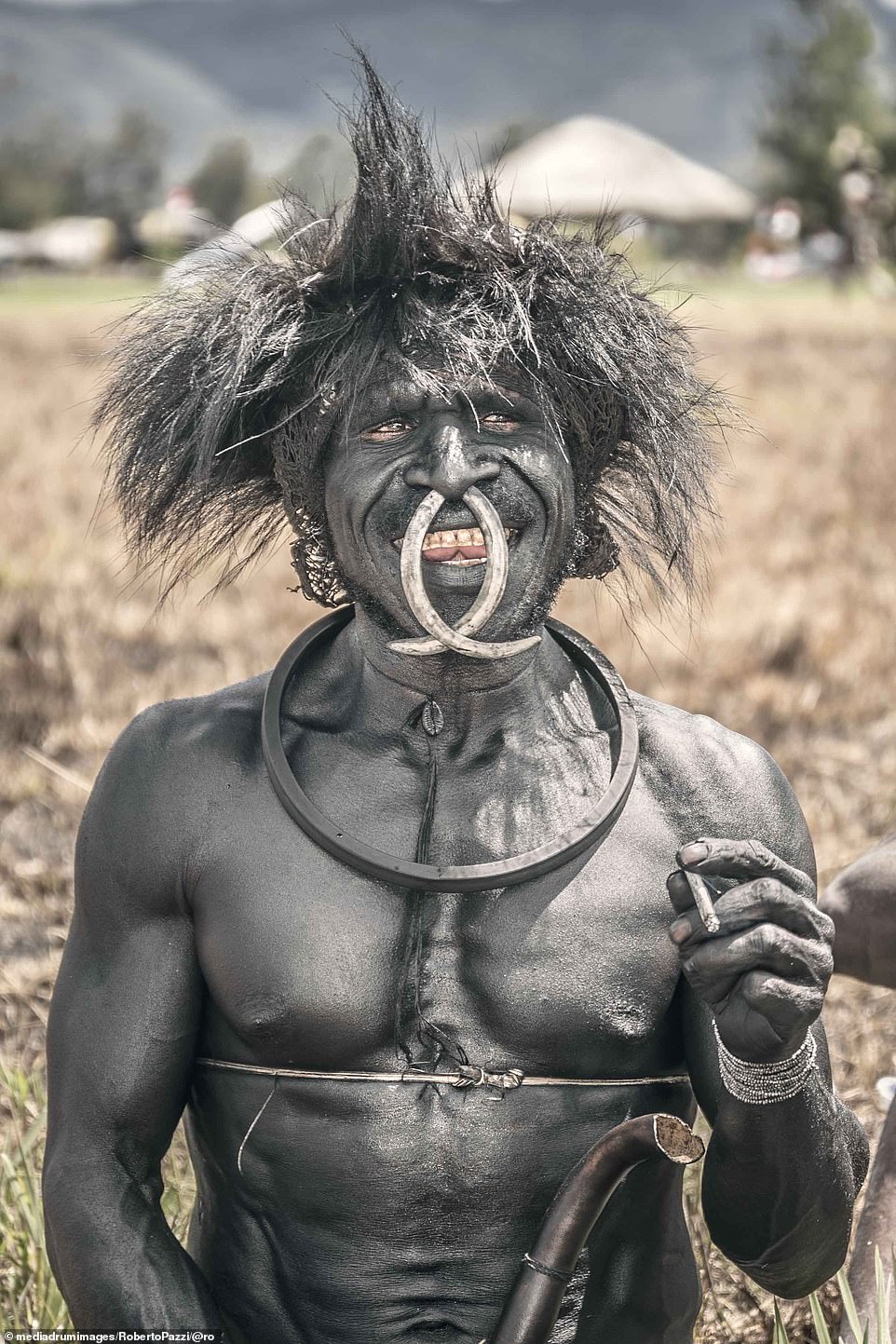 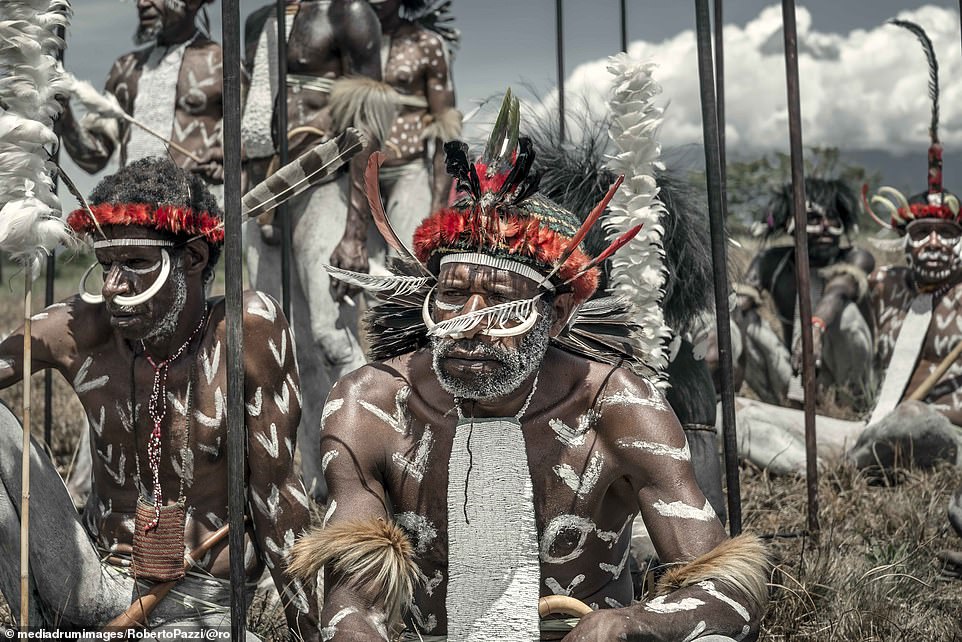 Traditionally, the cannibal Dani tribe take souvenirs from their enemies when killed. This included eating them to gain their strength 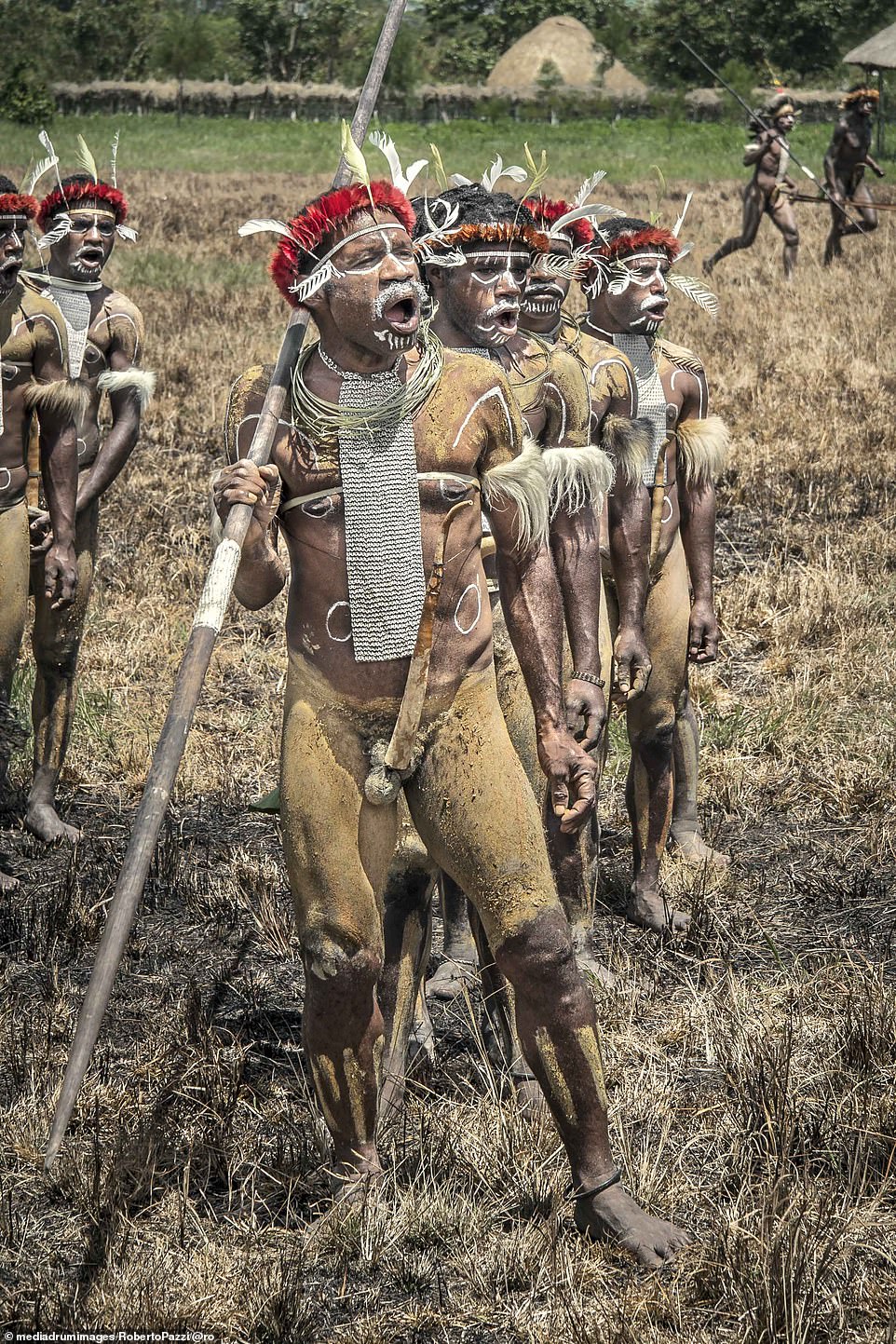 One of their customs seen in this photo is the wearing of a Koteka, commonly referred to as a penis sheath 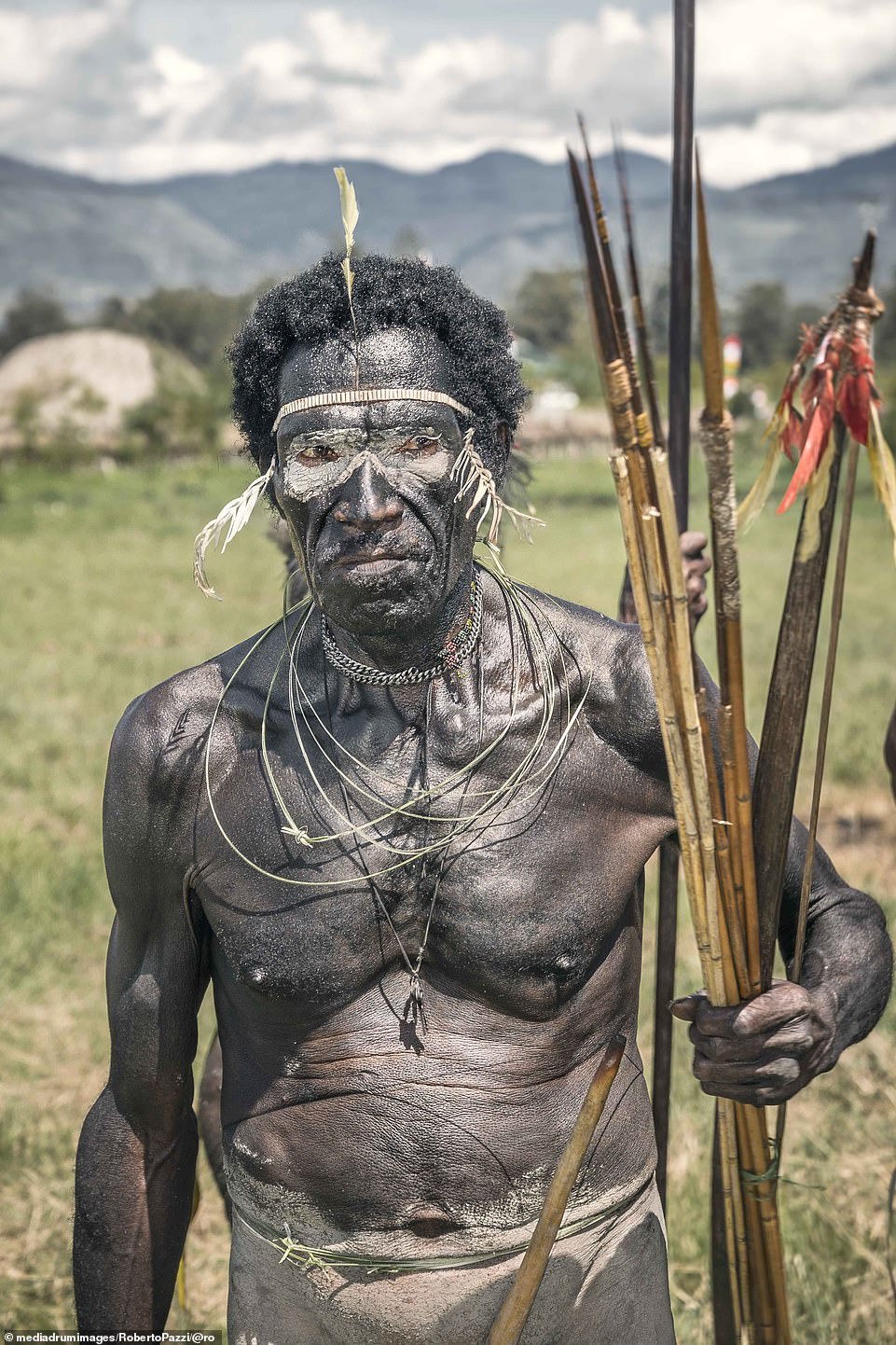 The tribe were cannibals until the 1990s when Christian missionaries stopped the practice, and now the tribe only eat meat on special occasions

The images of the tribesmen where captured by photographer and software engineer Roberto Pazzi, 47, of Majorca, Spain, who snapped the shots with a Nikon D600 with 24-85mm.

One of their customs seen in the photos is the wearing of an unusual piece of underwear worn by males – the Koteka – which is commonly referred to as a penis sheath.

The tribe were cannibals until three decades ago, when Christian missionaries stopped the practice, and now the tribe only eat meat on special occasions. They only eat pigs for very important ceremonies such as birth, or marriage.

‘I wanted to visit them because they were one of the last tribes to ever be discovered on earth, just 82 years ago, they live in over five-thousand-feet of forest, so were quite hard to find,’ said Roberto. 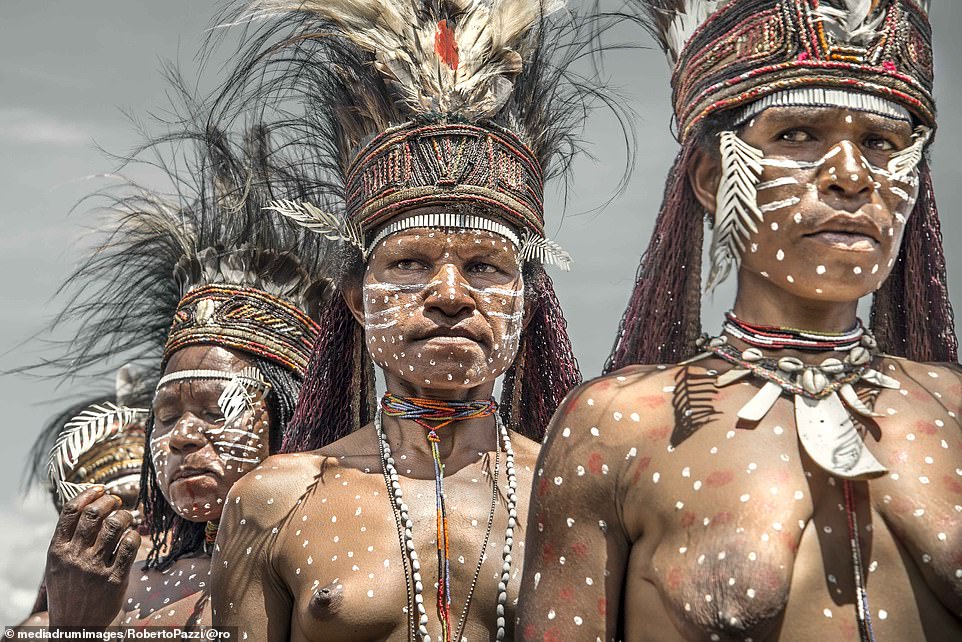 Traditionally, grieving Dani women cut off the tips of their fingers which is meant to symbolise the pain one feels after losing a loved one 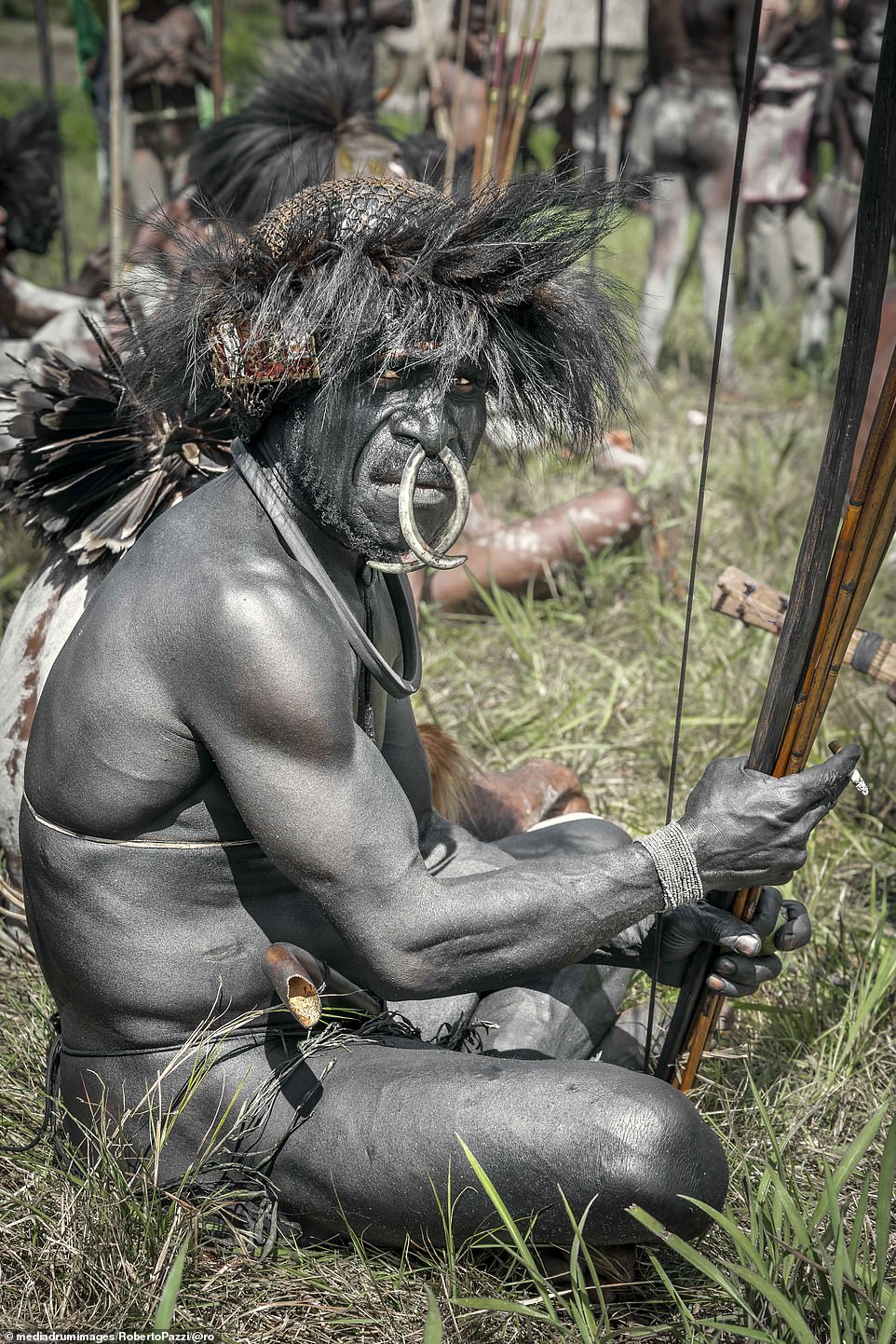 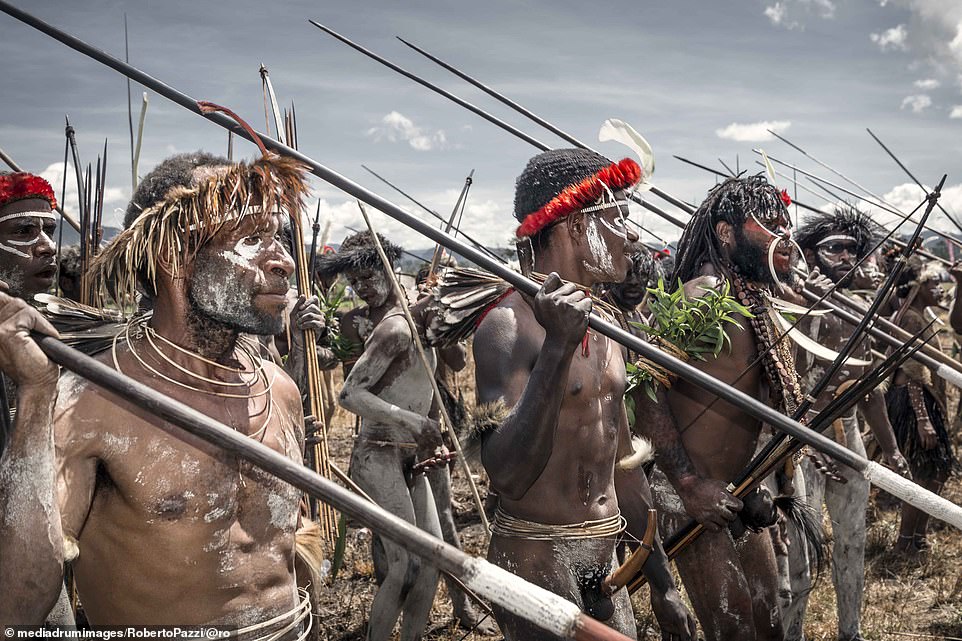 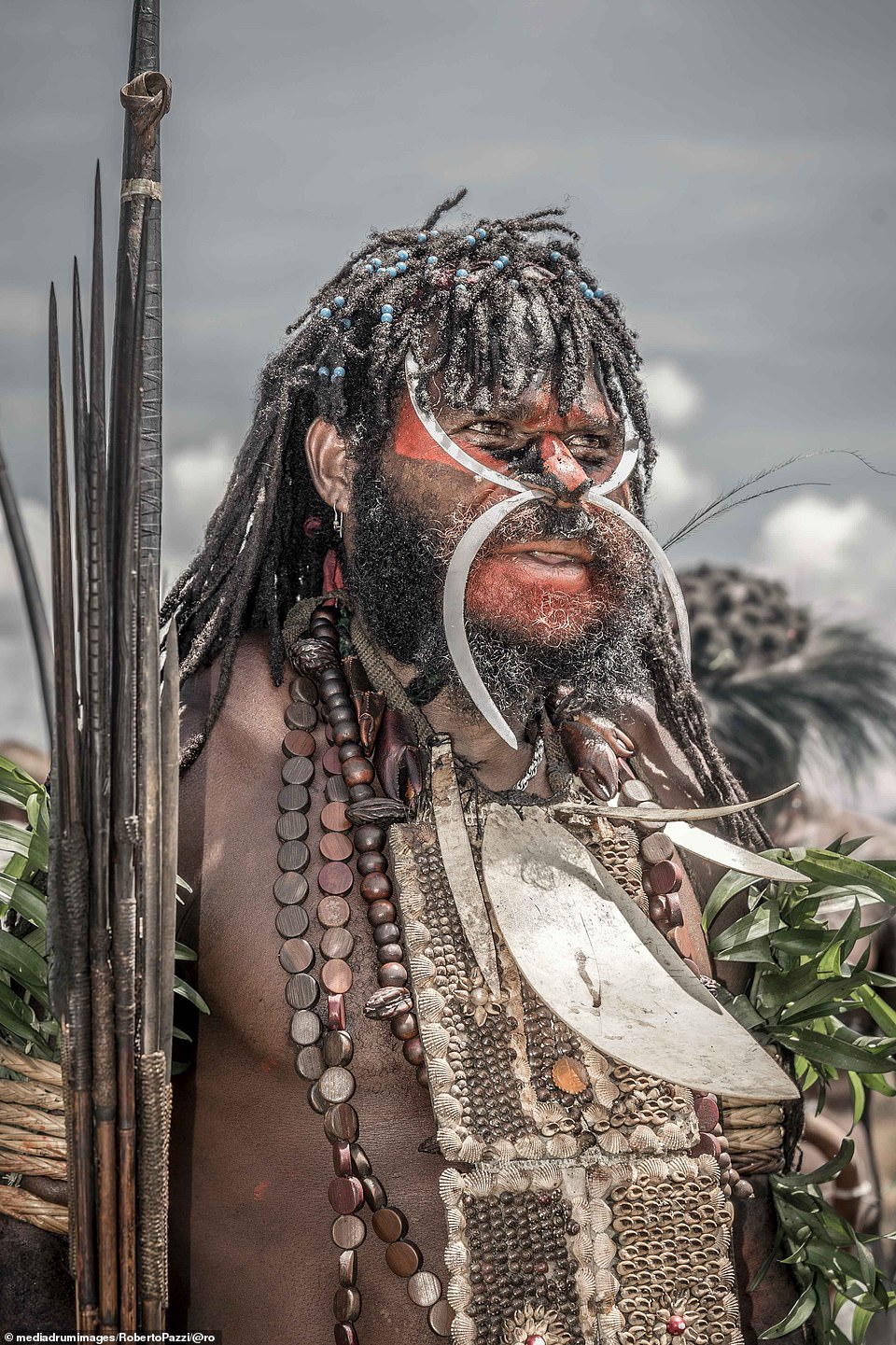 The Dani languages only have two words for colours: ‘mili’ for cool and dark shades and ‘mola’ for warm and light colours 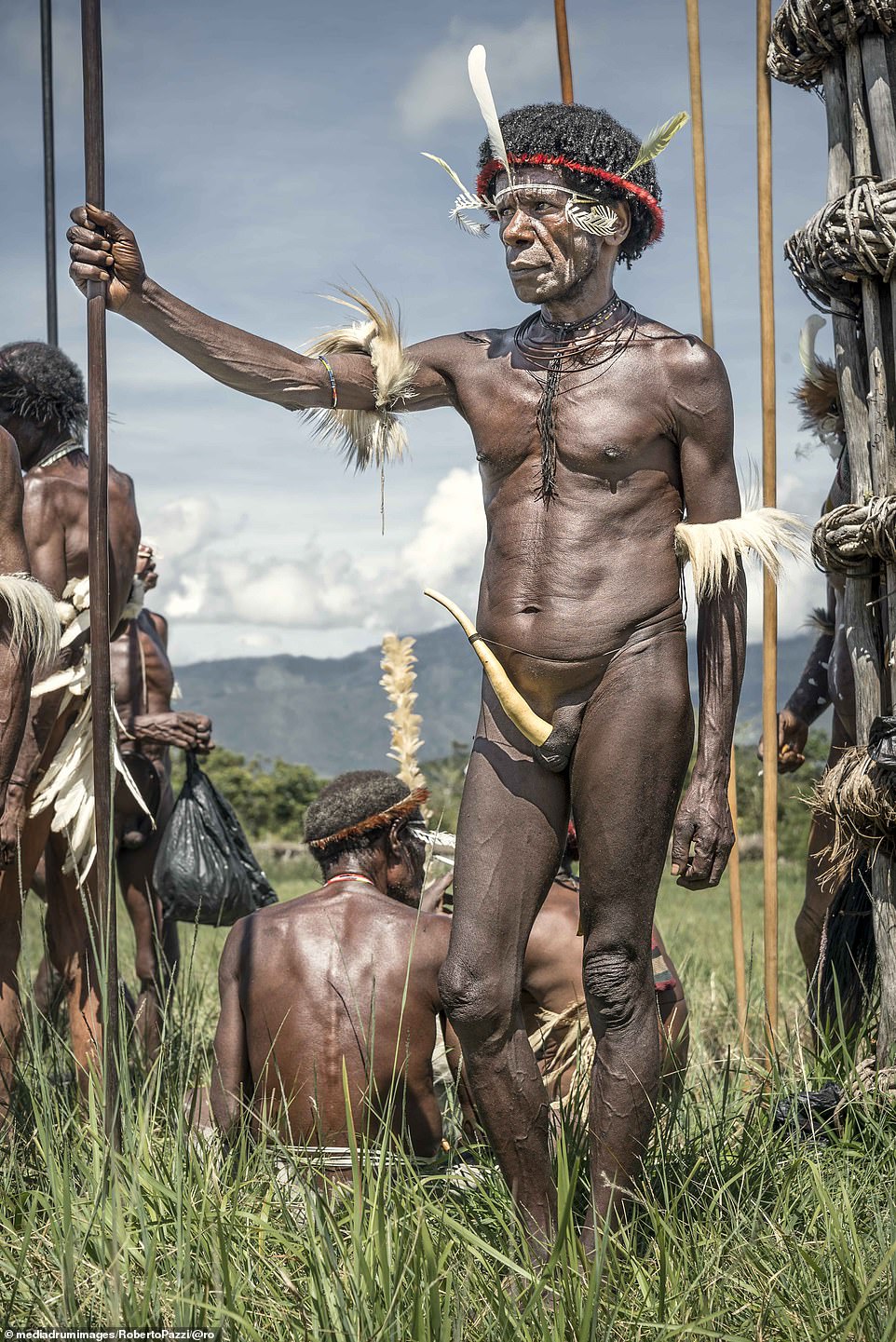 ‘I was shocked to learn that the men are polygamous, but because of financial struggles many men do not have more than two wives.

‘Also grieving women who lose the men in their family do cut off the tips of their fingers because it is believed that women do not feel pain as much as men.

‘They were also cannibals until the 1990s because they believed if they ate their enemy, they could gain their power.

‘But they are losing traditions thanks to globalisation and the Indonesian government.

‘The men are losing traditions of penis sheaths by switching them for trousers.

‘Meanwhile the women are also covering up with more clothes, but they still do not have any mobile phones or automobiles. 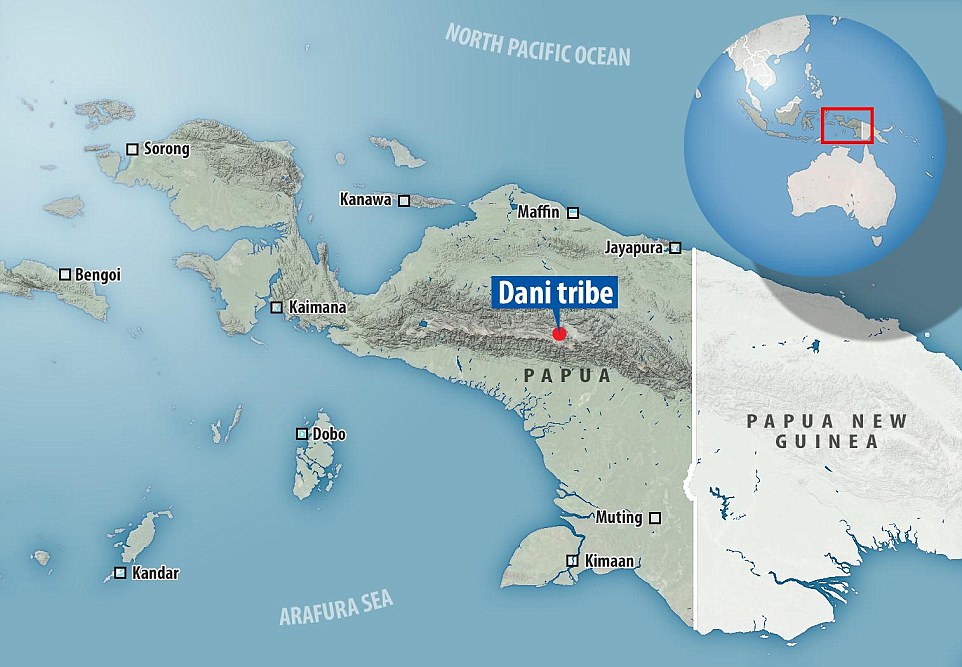 The Dani tribe live deep in the highlands of Western New Guinea, Indonesia, and is one of the world’s most isolated tribes

‘They do use some gifts they are given; one was playing an acoustic guitar. I brought them sugar and cigarettes and they welcomed me in return.

‘Overall it was an unforgettable experience, the cute children were so happy to be playing with nothing, and the men were sceptical at first but there was a lot of respect.

‘Unfortunately I didn’t interact with the women much to avoid to upsetting men due to their culture.’

Their main crops are banana, sweet potato, and cassava. The hold sweet potatoes in the highest regard, and it is used for bartering, and even in taking a daughter’s hand-in-marriage.

The remote tribe, who have over 300 visitors per year according to 2013 estimates, use hot stones to cook their food.

New Guinea’s cannibals became infamous in 1961 after they were accused of the murder of Michael Rockefeller, who was the son of then-New York Governor and billionaire Nelson Rockefeller.

In 1961, Michael Rockefeller, son of former US vice-president Nelson Rockefeller, went missing in the valley at just age 23.

He was paddling a 40-foot-long canoe with a Dutch anthropologist when it capsized. His body was never recovered. 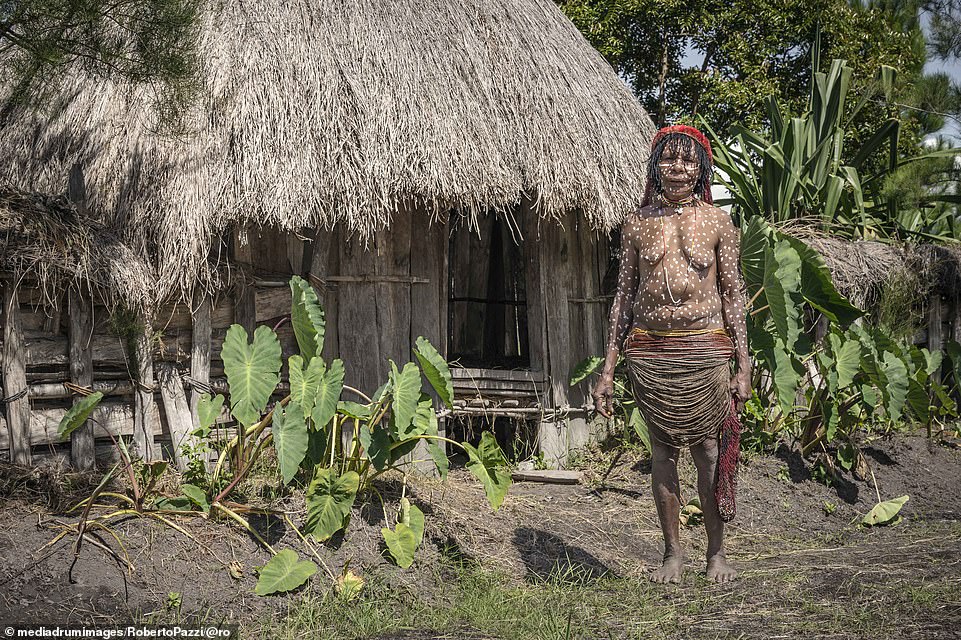 What happened to Michael Rockefeller? 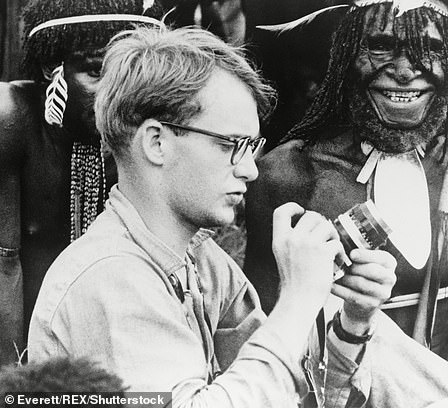 Michael Rockefeller, 23, son of billionaire Nelson Rockefeller was on an expedition to New Guinea when he disappeared in 1961

The 23-year old Harvard graduate was in Netherlands New Guinea collecting the haunting wooden carvings of the Asmat people for his father’s recently opened Museum of Primitive Art.

He was part of an expedition studying the Dani people in the Baliem area in New Guinea.

He was paddling along the New Guinea coast with Dutch anthropologist, René Wassing, when their 40-ft canoe capsized.

After waiting hours for help Rockefeller began to swim the estimated 12 miles towards the shore and was never heard from again.

His body was never found and his presumed death was ruled as drowning – but rumours have long since circulated about the fate of the American heir.

At the time, Rockefeller’s disappearance was a major world news item and a search was carried out by helicopters, airplanes, ships, and thousands of locals.

However, many believe that he was killed and eaten by cannibals.

A book published in 2014 by Carl Hoffman claims that there is ‘clear and abundant’ evidence that Rockefeller made it to shore and was killed and ceremonially eaten by the Asmat tribesmen.

Hoffman carried out extensive research in the Netherlands as well as New Guinea researching his book Savage Harvest.

He claims that once Rockefeller made it to shore, the men of the Asmats – a notoriously violent New Guinea tribe – tortured, beheaded and ate Rockefeller in a ritualistic cannibal killing.

The reason for the horrific killing was revenge after the Dutch ordered the killing of five of their own elite Asmats.