Photographer’s stunning shots show that the Lake District is mesmerising, whatever the weather

The 28-year-old reveals: ‘Often the best conditions for landscape photography come from being out during the bad weather. It’s the most dramatic.

‘And if you’re not stood on that mountainside when the weather front has passed and the light emerges, then you won’t be able to make it up there in time to capture it!’

Since moving to the Lake District two years ago, the secondary school P.E teacher – who is originally from Merseyside – has dedicated a lot of his spare time to exploring the area’s lesser-known mountain ranges – with spectacular results.

‘I don’t often visit the easy-access “classic” photography locations… I’d say 95 per cent of my photography is taken high up in the fells in quite obscure locations,’ he explains, adding: ‘I love the Lake District. It’s incredibly unique and the diversity within a relatively small geographic area is wonderful to see. Regular visitors will understand when I say that each “corner” of the Lakes has its own unique feel, when you compare the rugged, rocky landscape around Wasdale and Eskdale to the gentle rolling fells in the east – it’s easy to understand why.’

For Ross, the dawn starts and long treks in horrendous weather are worth it when he captures stunning shots, such as snow-capped fells under dramatic clouds, and the mighty Scafell Pike – England’s tallest mountain – in a shower of hail. Scroll on for our pick of some of Ross’s most awe-inspiring photos…

Pictured here is the view from one of the Lake District’s most popular mountains – and one of Ross’s favourites – Great Gable, which stands to the north-east of lake Wastwater. Ross recalls: ‘What an absolute privilege it was to stand on top of this majestic mountain, watching the sun setting and the clouds swirling in the valleys on all sides and around the surrounding fells. I spent three hours mooching around the summit of Great Gable and it felt like ten minutes. This is the Lake District at its best.’ He adds of Great Gable: ‘It’s very photogenic from all angles, a wonderful hike from all directions and is home to some very special memories for me’ 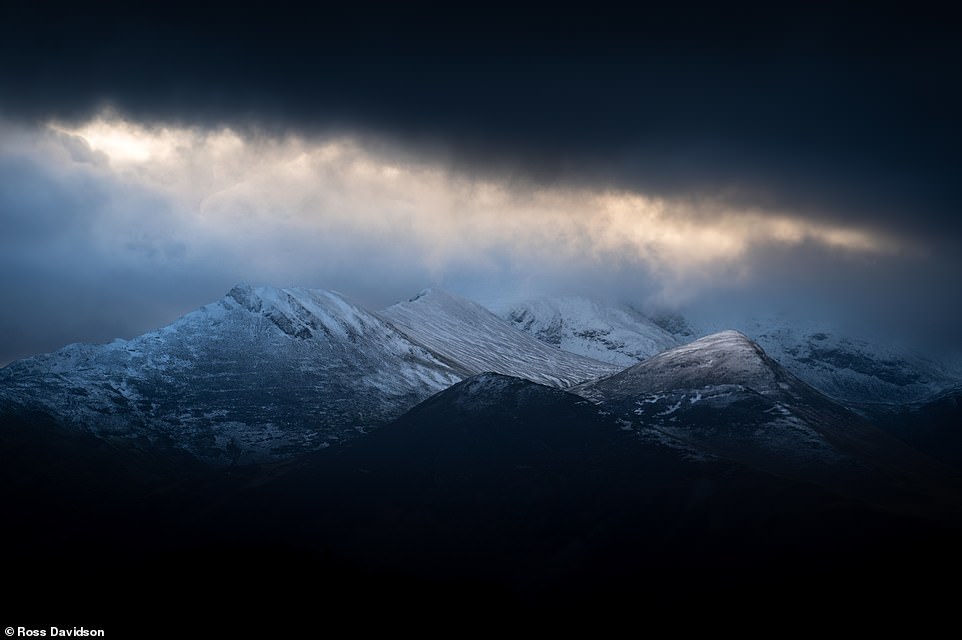 This atmospheric shot captures a cluster of brooding peaks in the Newlands Valley, with Causey Pike on the left. For Ross, the Lake District offers a huge variety of dramatic landscapes to explore. He says: ‘Regular visitors will understand when I say that each corner of the Lakes has its own unique feel, when you compare the rugged, rocky landscape around Wasdale and Eskdale to the gentle rolling fells in the east’ 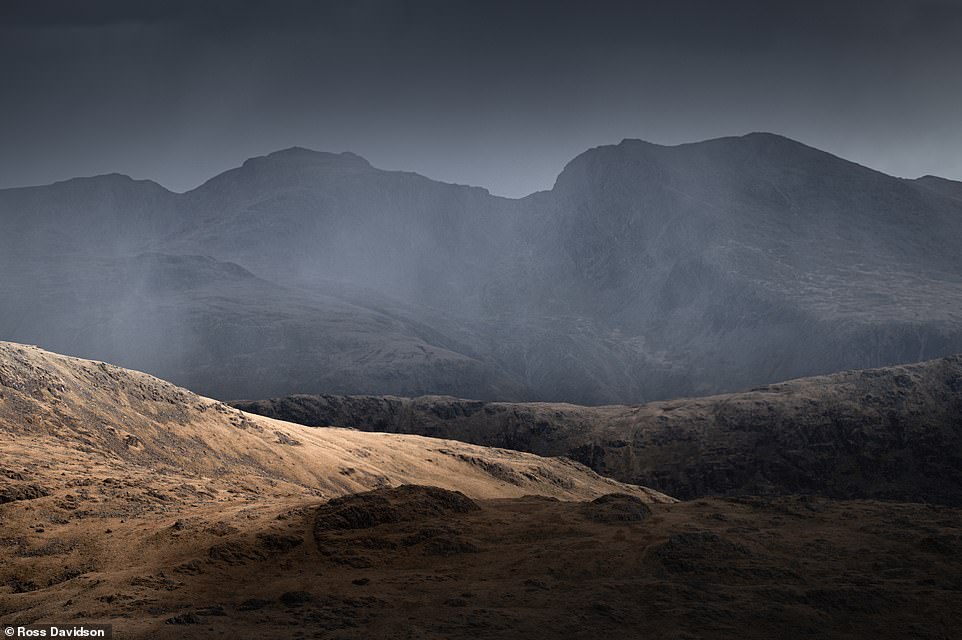 Scafell and Scafell Pike, the second-highest and the highest mountains in England respectively, are pictured here standing side by side ‘amidst a downpour of hail and a splash of light’, says Ross. The mountains are set near the village of Grasmere. Ross adds: ‘I love the Lake District. It’s incredibly unique and the diversity within a relatively small geographic area is wonderful to see’ 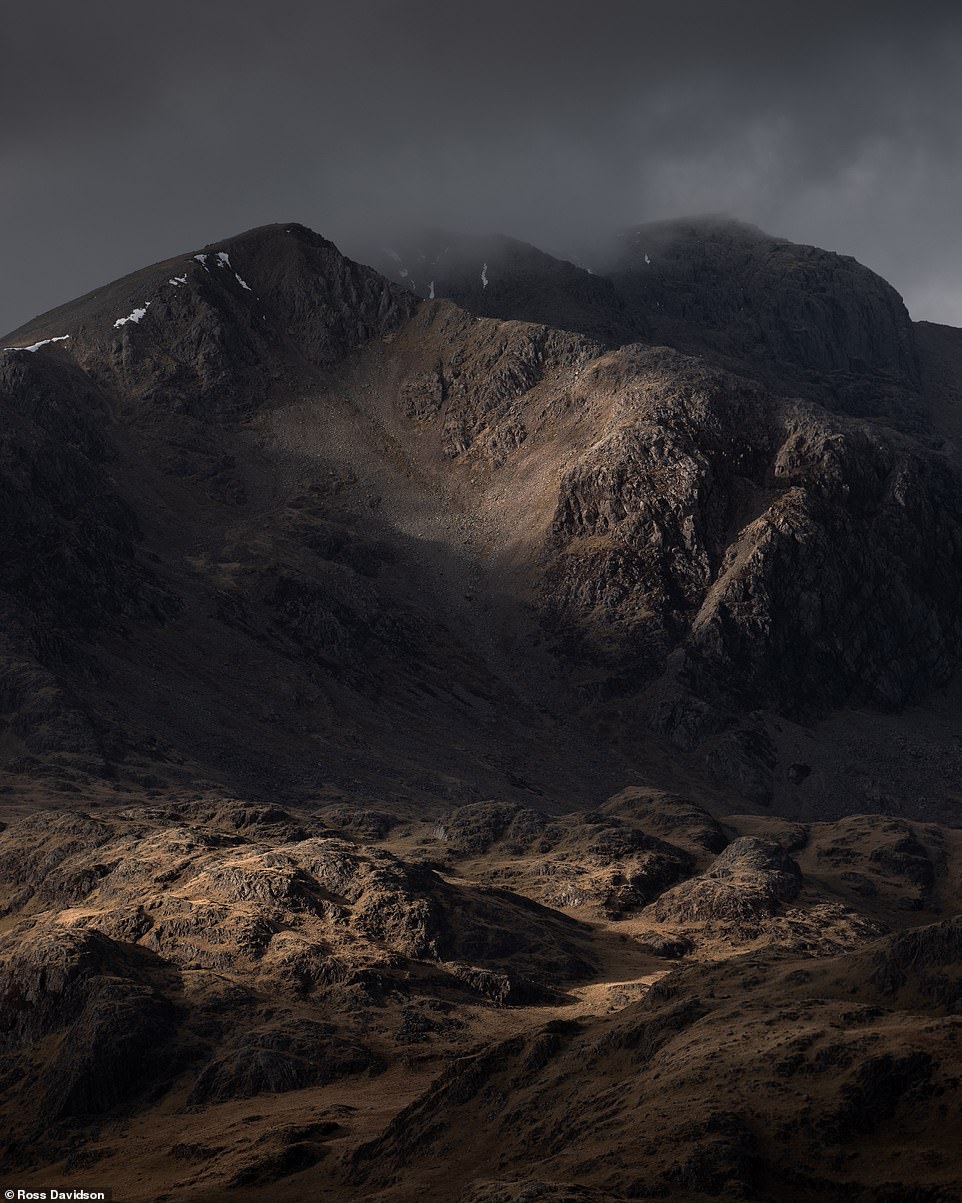 The mighty 3,163ft- (964m) high Scafell mountain is captured here looking especially dominating. Ross reveals that he loves to visit the nearby valley of Eskdale, as it allows him to photograph the ‘staggering mountain vista that is the Scafell range’ 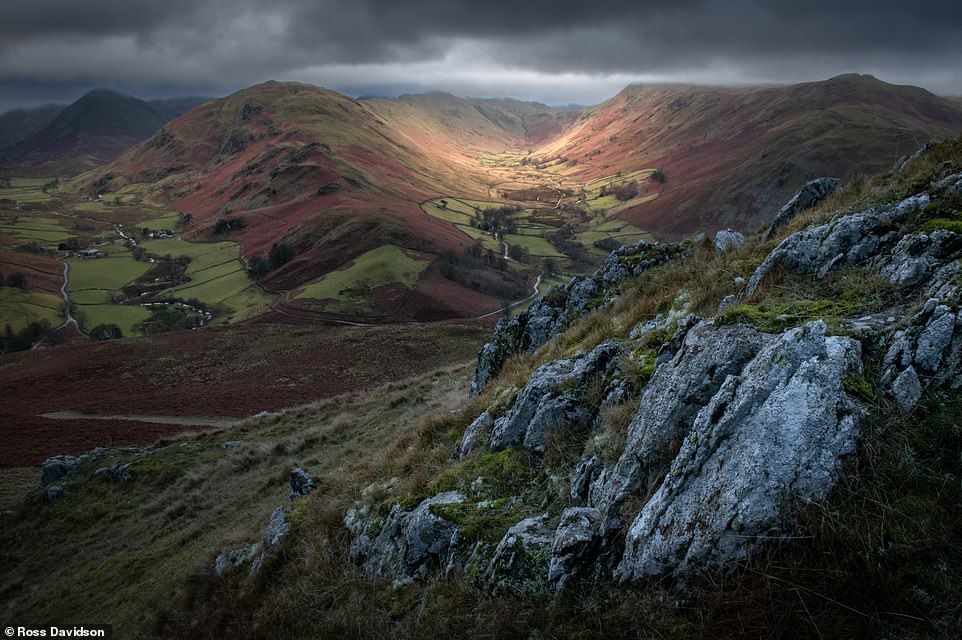 Ross walked around the shores of Ullswater, a lake near the town of Penrith, before hiking up Hallin Fell, where he took this stunning photo. He recalls: ‘I had always been keen to return to this location for the lovely view down into Martindale. It’s really quite unique. Luckily for me, the dense clouds started to thin whilst we were tucking into our butties, and allowed for this beautiful glow to illuminate the bottom of the valley’ 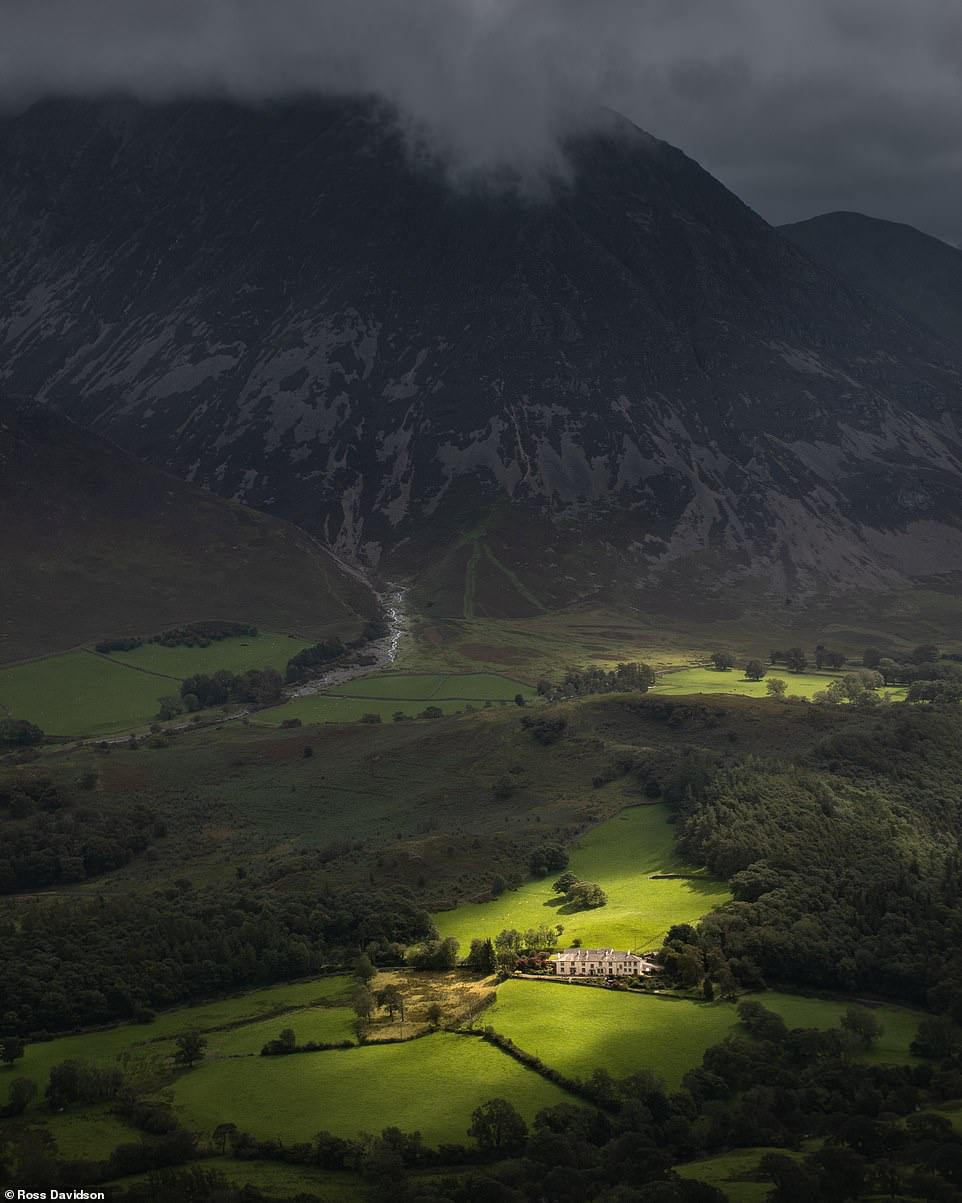 This incredible shot was taken in the Vale of Lorton, a series of valleys that range from Cockermouth towards Keswick. It shows a ray of light breaking through the dark clouds overhead. Ross says: ‘The most important factor in landscape photography is just getting out. It’s obvious but you’ll never see those moments if you’re sat in the warm on the sofa!’ 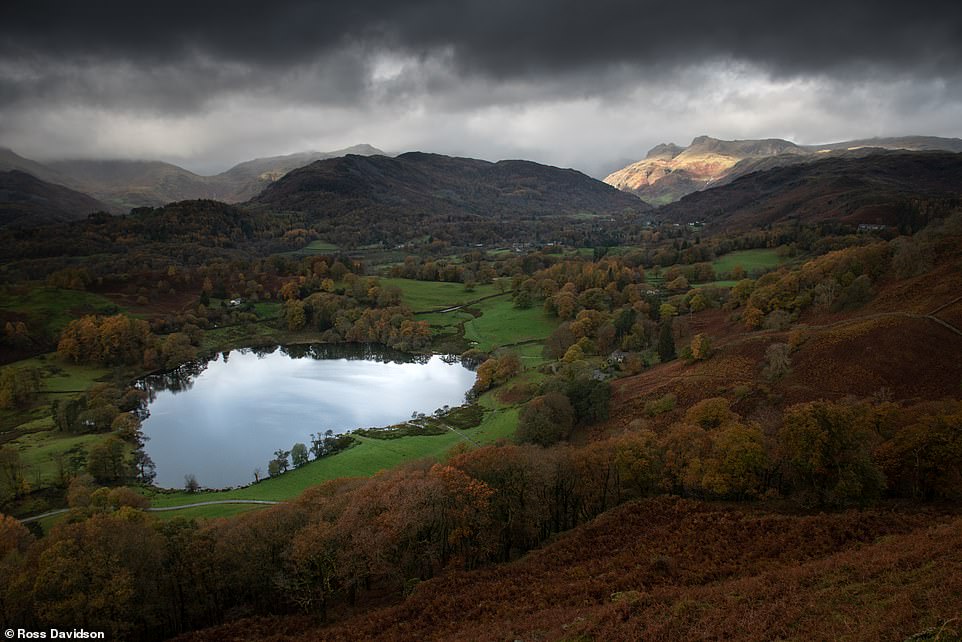 This epic picture shows the lush landscape around Loughrigg Fell, a hill near Ambleside in the centre of the Lake District 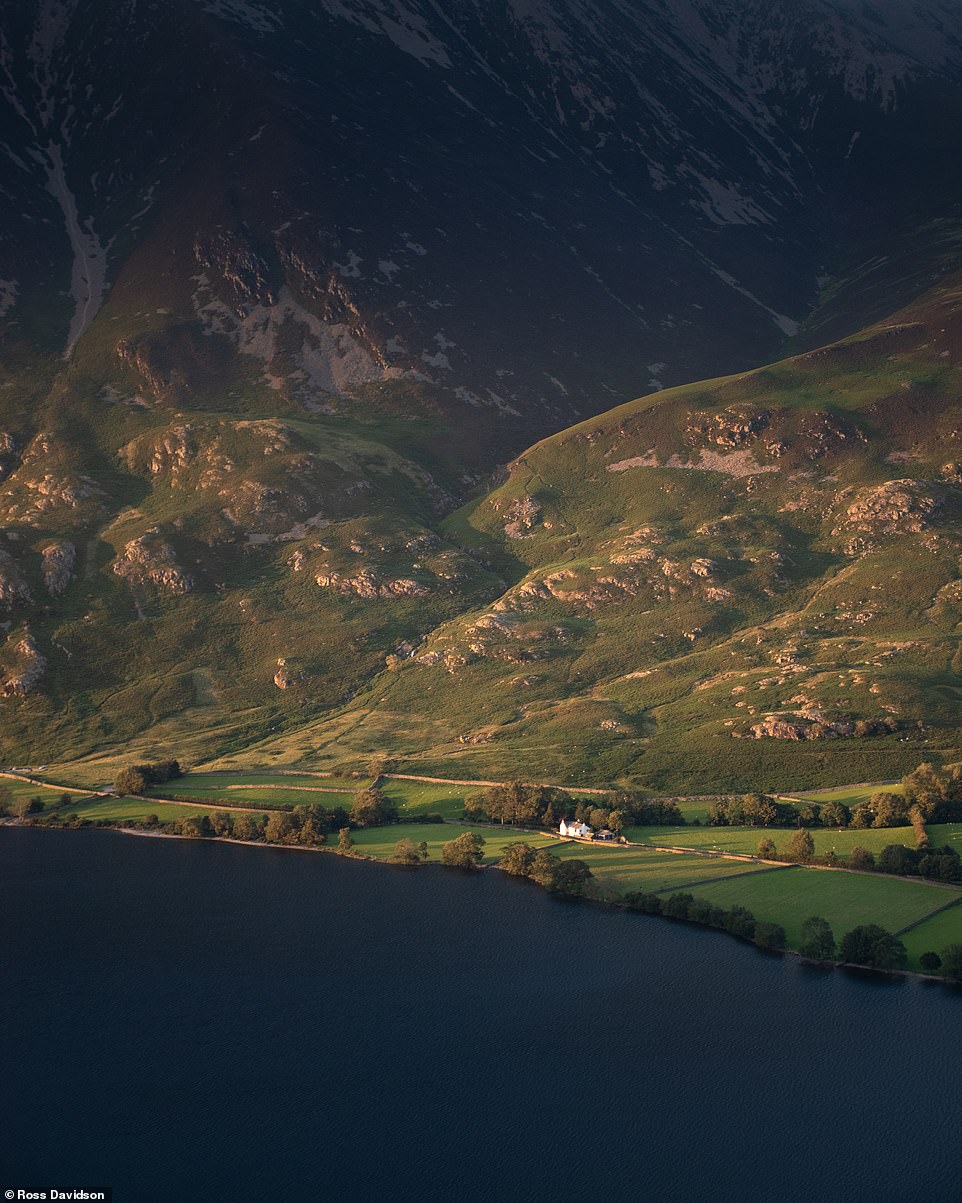 This spectacular photo was taken from the southern slope of the hill of Mellbreak, which looks toward Grasmoor mountain and Crummock Water in the western part of the Lake District. Speaking about the immense scale of the mountains in the region, Ross says: ‘If you get out and about in the mountains we have, then you will realise they stand up to any mountain ranges in the world’ 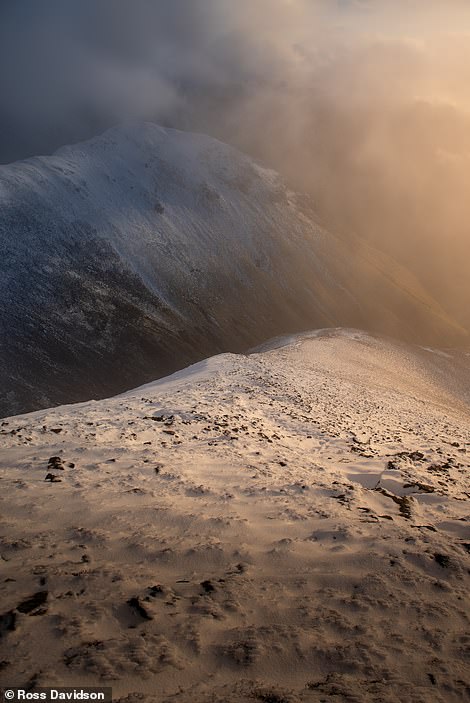 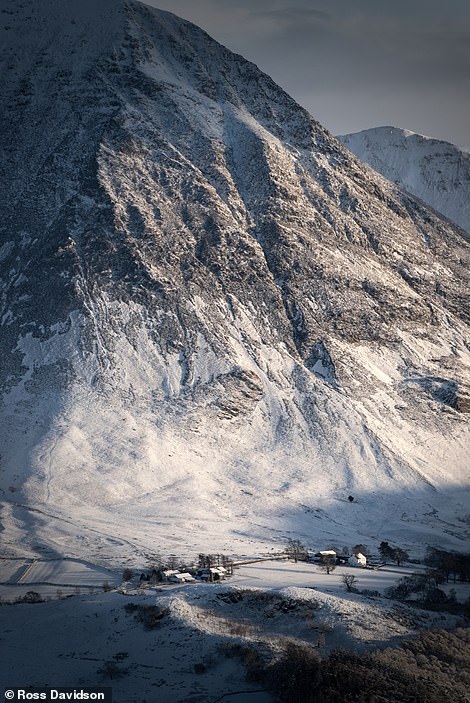 LEFT: This mesmerising snap was taken while descending the southeastern ridge of Grasmoor, and features a snow-dusted Whiteless Pike in the background, says Ross. He adds: ‘I will never tire of these views. Simply stunning conditions high up in the Lake District fells.’ RIGHT: This photo shows the incredible scale of Grasmoor mountain, illustrated by the seemingly tiny houses at its foot. Ross says: ‘Composition is one of the most important factors to creating an impactful image’ 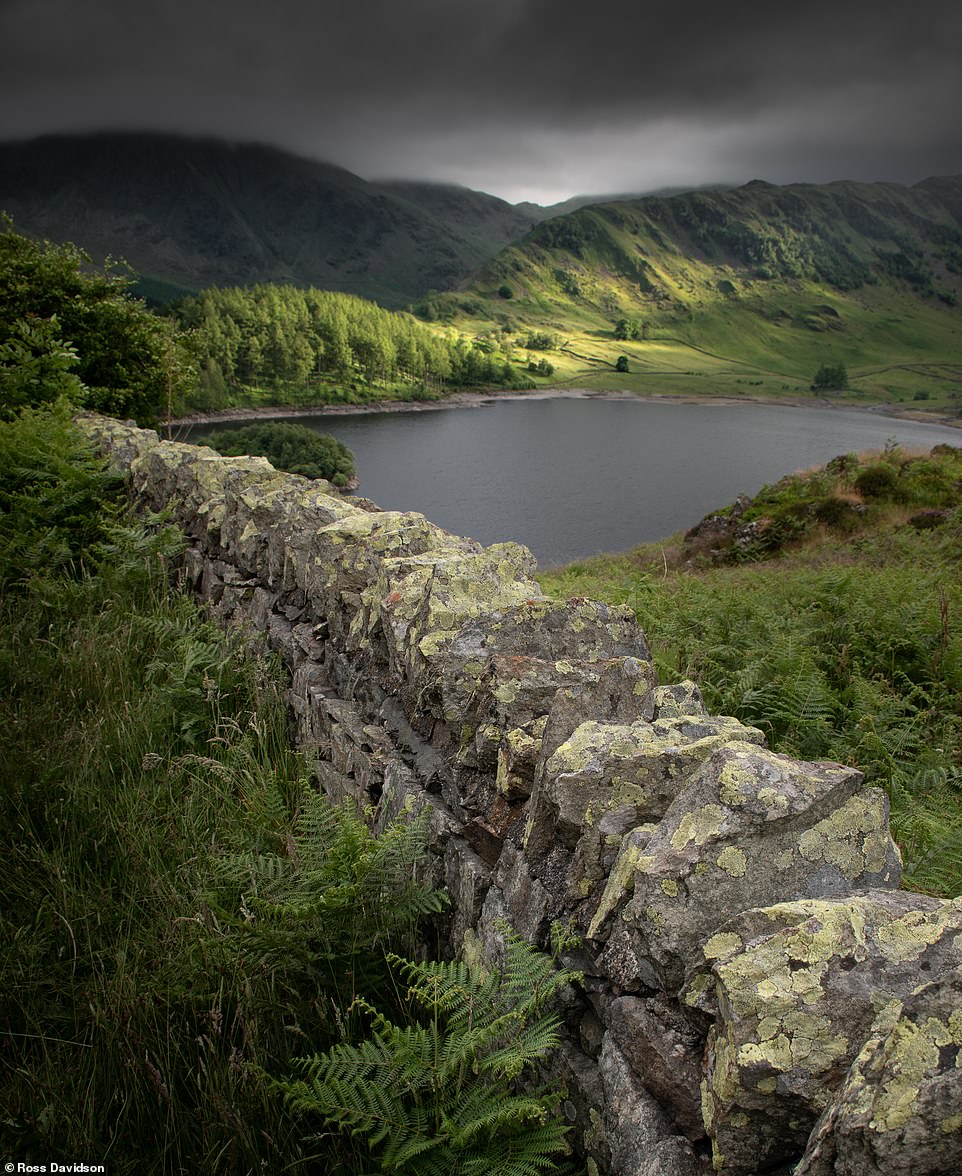 ‘This was a spur of the moment shot when some nice light broke through the clouds across Haweswater (a reservoir in the valley of Mardale),’ Ross recalls of this beautiful picture. ‘I love how just a little bit of light can completely change a scene,’ he adds 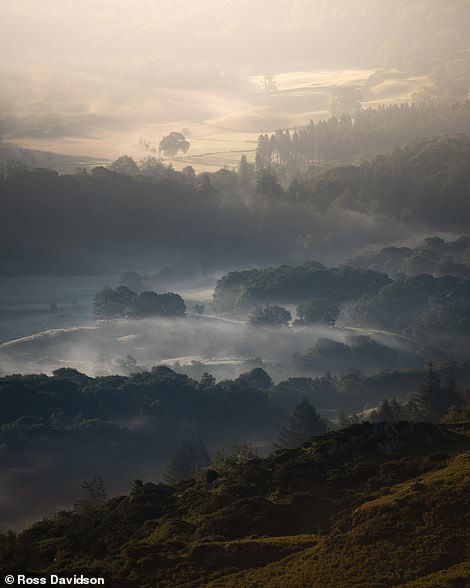 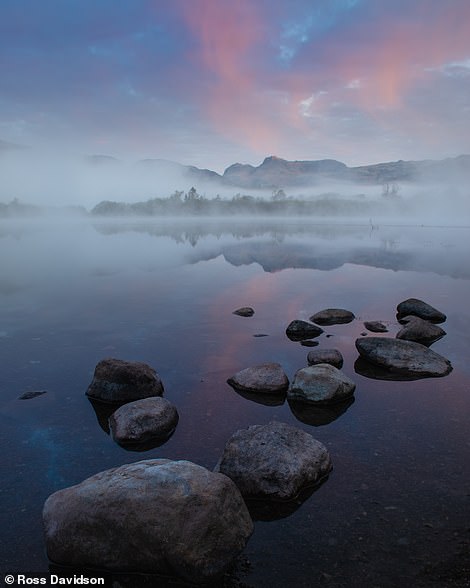 LEFT: Pictured here is a misty morning in the Great Langdale Valley – an area that travels west of Ambleside up to the Langdale Pikes – taken from Lingmoor Fell. Contrary to what some people may think, the picture-perfect light and weather conditions are not something that Ross encounters through luck. He explains: ‘[There are] lots of early starts – I prefer shooting at sunrise. I just prefer the light and conditions at that time of day – and enduring long hikes with adverse conditions can lead to fantastic results.’ RIGHT: Named Stepping Stones to Heaven, this photo captures the beautiful pastel blues and pinks of the sunrise over lake Elterwater in Great Langdale. Contrary to the calmness it conveys, Ross remembers: ‘This was another one of those frantic moments when I saw the conditions forming as the sun rose. I plonked the tripod down and quickly arranged my composition, and this was the first shot that I fired off’ 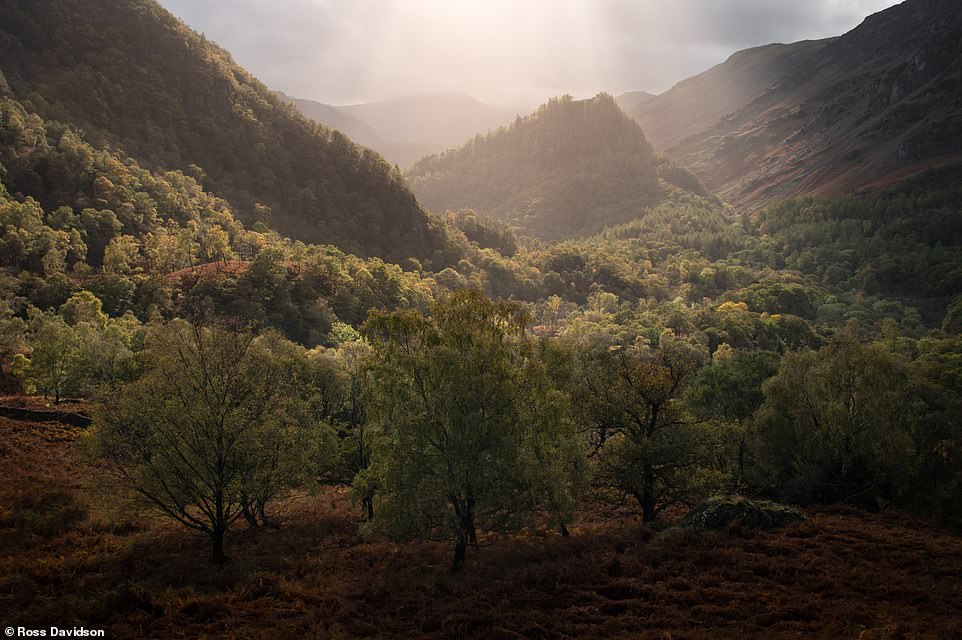 Ross calls this majestic photo ‘The Last March of the Ents’, in reference to the tree-like beings from J  R R Tolkien’s Lord Of The Rings. It shows picturesque Borrowdale Valley, an area south of Keswick 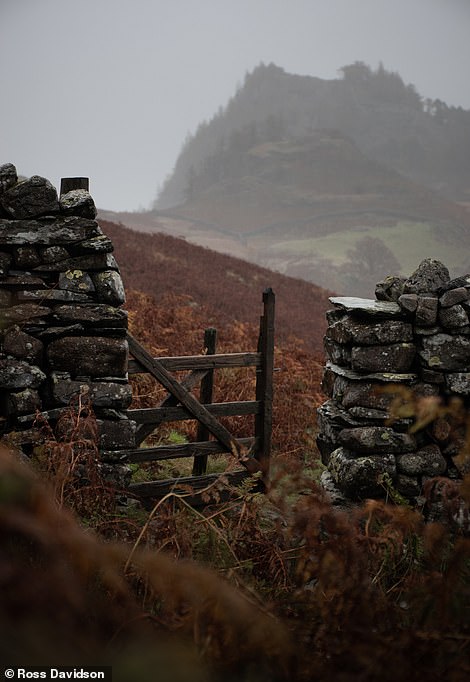 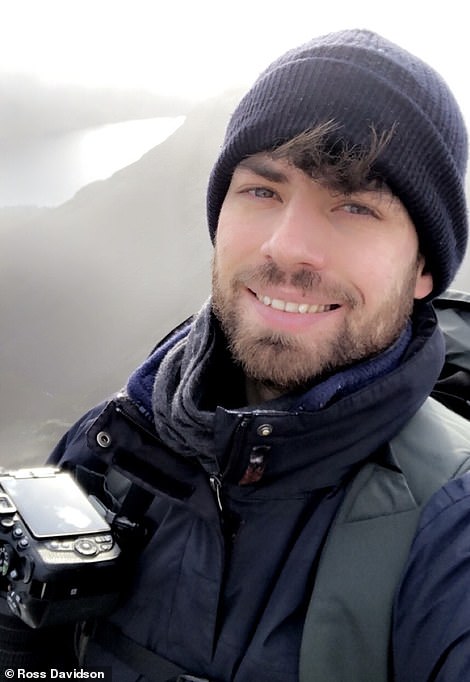 LEFT: This drizzly photo depicts a rickety gate with Castle Crag Fell, a hill south of Derwent Water, in the background. ‘This pretty much sums up the weather we’re having here in the Lakes this autumn,’ Ross wrote in his caption when he posted this on Instagram. RIGHT: A passionate hiker, Ross says that he tends not to plan his shoots and prefers a more ‘reactive style’. He adds: ‘It’s important to be flexible in my opinion’