‘Pick up the phone’: Pamela Anderson’s message to Scott Morrison to save Julian Assange

The fight to free WikiLeaks founder Julian Assange goes on, a campaigner said after a long-running rape investigation was dropped last week.

The 48-year-old remains in a British jail, awaiting a 2020 hearing to see whether he will be extradited to the United States on computer hacking and espionage charges.

A Swedish prosecutor announced last Tuesday that a rape investigation into Assange had been dropped, ending the near decade-old case that had sent him into hiding in London’s Ecuadorian embassy to avoid extradition.

Assange had repeatedly denied the sex crime allegations, calling them part of a plot to discredit him and secure his eventual transfer to the US.

The statute of limitations had run out on most of the allegations while he was in the embassy but the remaining case was reopened when he left.

Deputy Chief Prosecutor Eva-Marie Persson has said the passage of time meant there was not enough evidence to indict Assange.

Following the decision the accuser’s lawyer said she was studying whether to appeal it.

Greg Barns, adviser to the Australian Assange campaign, said he had heard from the prisoner’s UK team that visits had been cancelled and was concerned the inmate had not yet heard the news that the case had been dropped.

‘If it’s the case that there’s been difficulty communicating with him at a very significant time in terms of legal developments then that is troubling,’ he told AAP.

He said Assange’s mental and physical condition has continued to deteriorate while in jail.

The campaign is reiterating its call for the Australian government to help Assange and urge the US to drop the charges against him.

‘We’re urging the Australian government to involve itself heavily in this matter,’ said Mr Barns.

‘The real issue is the fact that the Trump administration wants to extradite Julian Assange. It was always clear but of course with the Swedish matter now fully out of the way that is what this issue is all about.’ 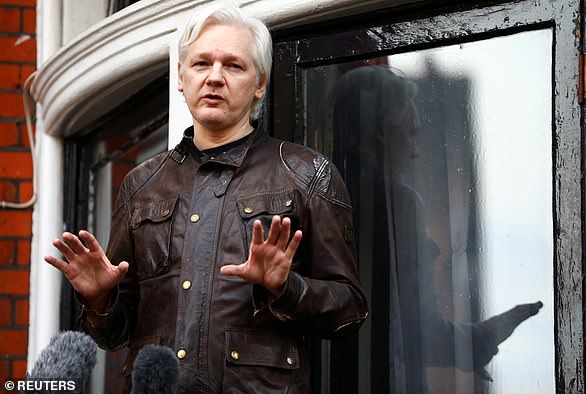 Assange is seen on the balcony of the Ecuadorian Embassy in London, Britain, May 19, 2017

Mr Barns said the campaign has not given up hope for Assange, referring to the case of Adelaide-born David Hicks who was detained at Guantanamo Bay from 2002 until 2007 when he pleaded guilty to providing material support for terrorism, having joined an al-Qaeda training camp.

The plea deal allowed most of his seven-year sentence to be suspended and for him to return to Australia to serve the remaining seven months.

‘We saw in the case of David Hicks when there is community pressure and political pressure of sufficient magnitude there can be change in that relationship between Australia and Washington,’ he said.

The decision by the Swedish prosecutor heads off a potential dilemma for the British courts which might otherwise have had to decide between competing US and Swedish extradition requests.

Since leaving the embassy, Assange has served a British sentence for skipping bail. He is now being held pending his next hearing in February on the US extradition request.

He faces 18 criminal counts including conspiring to hack government computers and violating an espionage law.