Pictured: Boy, nine, who died when he fell off locker which then fell on him at swimming club

Tributes have poured in for a nine-year-old boy who died after falling from a locker which then fell on him while he attended an after-school club.

The youngster, named locally as Leo Latifi, was said to have suffered serious head injuries at Great Baddow High School in Chelmsford after becoming trapped underneath the locker at an after-school swimming club.

Paramedics rushed to the school at around 6.30pm on Thursday before an air ambulance landed in the car park shortly afterwards. The boy was taken to Broomfield Hospital where he later died.

A boy was seen at the school gates today handing over flowers to a member of staff. One tribute left at the school read: ‘Leo, Thank you for all the joy you have given to our lives. You are a bright shining light that has been an impact on our lives.

‘We will miss you but remember you always with such fondness.’

Another read: ‘Leo, a precious boy taken far too soon.

Leo Latifi, who died after he became trapped under a locker at Great Baddow High School in Chelmsford 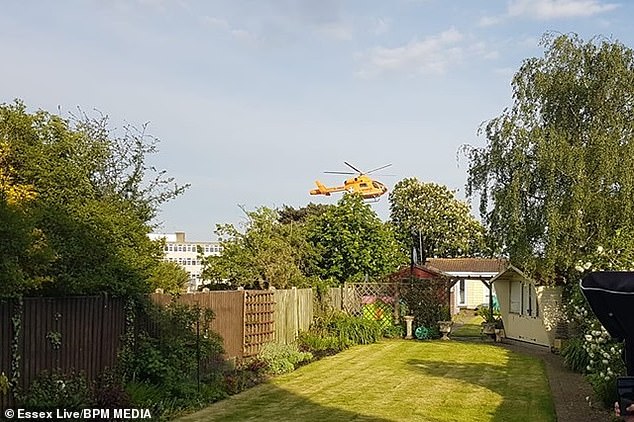 The un-named youngster is believed to have suffered serious head injuries after becoming trapped underneath the locker (pictured: The air ambulance, which landed at roughly 7pm yesterday) 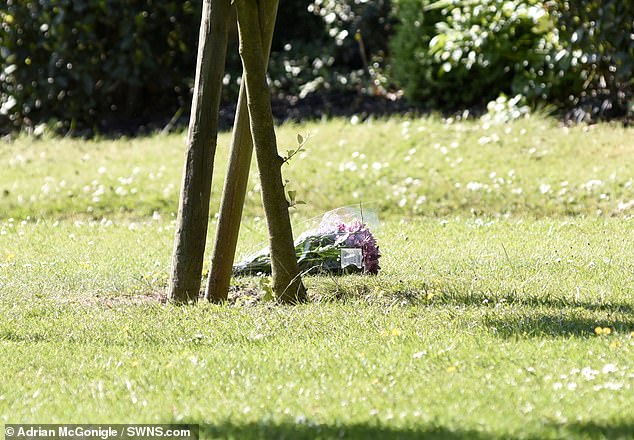 Pictured: Flowers inside the school grounds at Great Baddow High School in Chelmsford

‘Our love and thoughts are with all the family and friends on this sad day. Rest in peace.’

She said: ‘The thoughts and prayers of everyone at Great Baddow High School are with the family and friends of the child who died yesterday evening, his school and swimming club.

‘I can confirm that agencies will be carrying out an investigation following this tragic incident.’

A parent outside the school today said: ‘There are children inside there today just learning about it.

The Health and Safety Executive (HSE) is now investigating the incident alongside Essex Police. 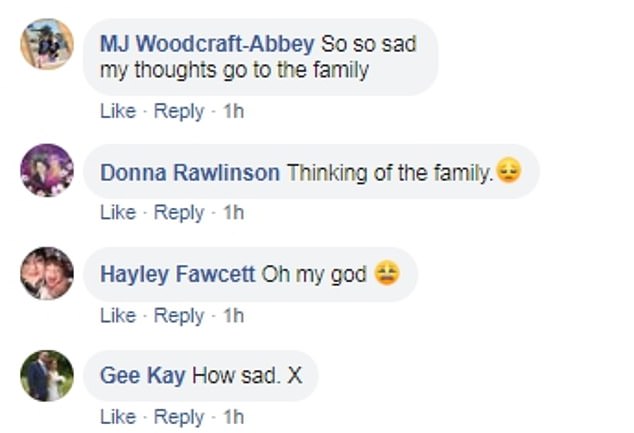 Tributes poured in to the nine-year-old boy, who died at Broomfield Hospital, on social media

One commenter said: ‘Our thoughts go out to his family and friends, a tragic accident RIP’

A statement reads: ‘HSE is aware of the incident and is jointly investigating with Essex Police who currently have primacy.’

The nine-year-old boy who died was not a pupil at the school but is understood to have been attending the club with his family at the time.

Maria Rumsey, headteacher at St Michael’s Primary School where Leo was a pupil, said: ‘All the staff, parents, governors and pupils from St Michael’s school are shocked and immensely saddened to hear of the tragic death of our Year 4 pupil, Leo Latifi.

‘He will be greatly missed by all.

‘We wish to extend our thoughts and condolences to all of Leo’s family and friends at this saddest of times.

‘Leo was a sparkle in our school.

‘His face lit up the classroom and his mischievous blue eyes made us all smile.

‘He was an avid scientist, who only on Wednesday, was in his element hunting for bugs on the school field. 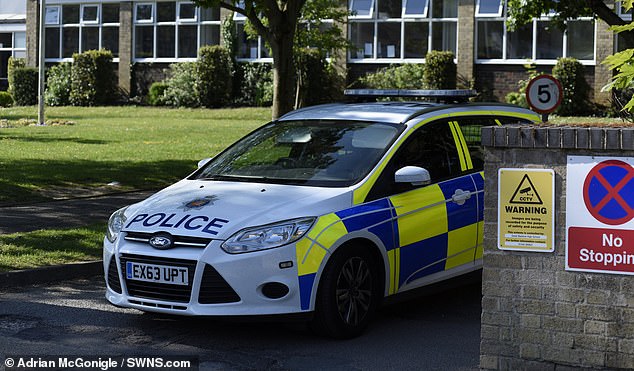 ‘Leo was always keen to share his model-building and wowed the class when he brought in the finished masterpieces!

‘He had a wide circle of friends in the year group, all of whom will miss him greatly.

‘We are supporting all of our children and staff today as we try to come to terms with this sad loss.

‘We are a strong and close community and will ensure that everybody is given the necessary help.

‘In order to do this, we would ask that you respect the privacy of the family and school community at this time.’

An Essex Police spokesman said: ‘We were called by the ambulance service at about 6.15pm on Thursday May 23 to reports a child had been injured at Great Baddow High School in Duffield Road, Chelmsford. 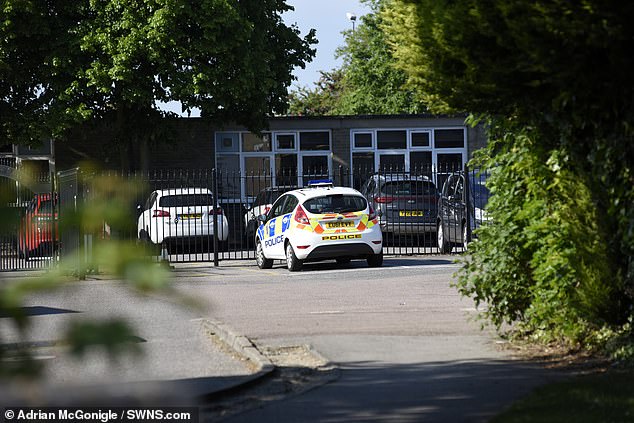 ‘The nine-year-old boy was believed to have fallen from a locker and become trapped underneath it.

‘He was taken to hospital, where he sadly died.

‘We are liaising with the Health and Safety Executive.

‘The child was not a pupil at the school and had been there with family members at an after-school club.’

Leo was not a student of Great Barrow High School but was attending a swimming lesson with ACe (corr) swimming school when the incident occurred. 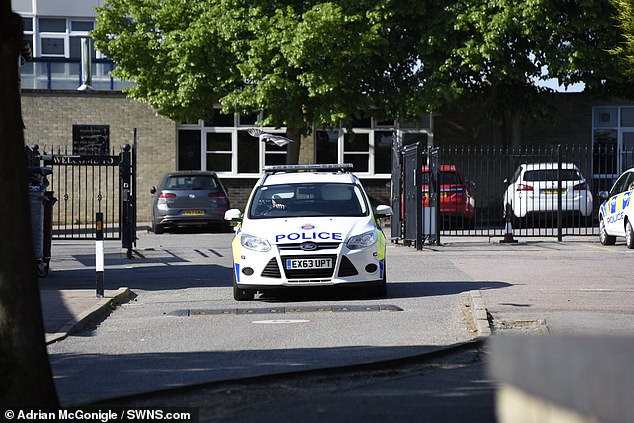 The school is owned by teachers Amanda Green and Cassie Gutteridge, who run 30 minute sessions every Thursday at Great Baddow High School.

The class, which has a waiting list, is open to swimmers capable of swimming 25 metres or more.

Both Amanda and Cassie declined to comment on the incident this morning.

One resident, speaking with Essex Live, said: ‘We saw the air ambulance, it was right over the house. It was rattling the windows and I couldn’t understand why it was so low.’

Another said: ‘We heard the ambulance and the helicopter but we didn’t realise it was for the little boy. All I can say is that I’m really shocked and upset, especially for the parents.’

A third resident said: ‘I saw the police running across the field, there were five police cars, two ambulances and a helicopter. You don’t expect that sort of thing to happen.’ 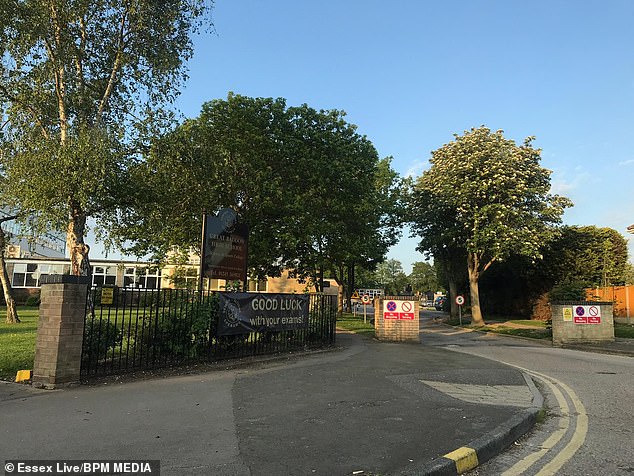 Taking to Facebook, Carley Hatcher wrote: ‘A boy has died due to a locker falling on him.

‘I am in shock this has happened, our children should be safe at school!

‘My heart goes out to all involved.’

Rachel Watts added: ‘RIP young man, it should not have been your time!’

The school said it is today closed due to ‘exceptional circumstances’ as investigations continue.

Witnesses said they heard numerous ambulances rushing to the scene.

A statement issued on the school’s website and sent to parents reads: ‘Due to exceptional circumstances, the school will be closed on Friday, May 24, except for Year 11 and Year 13 students sitting exams (GCSEs: Business Studies, Italian, DT; A levels: Business and Physics).

‘The buses will run as normal at the beginning and the end of the day.

‘Students taking morning exams will be able to leave the site after their exam.

‘The school is closed to all students except those taking exams.

‘Further information will be sent.’