The two boys aged just four and six who were killed when they were hit by a suspected drink-driver have been pictured for the first time.

Witnesses said Casper Platt-May was in a buggy being pushed across a residential street in Coventry and his older brother, Corey, was holding his mother’s hand, when they were hit by a black hatchback.

Their parents Reece and Louise Platt-May, who are said to be ‘devastated’, are being looked after by family.

The boy’s grandfather, Kim May, grandfather, said: ‘I have been with my son and Louise all night at the family home. We are so devastated.

‘They were with my other grandchildren on the way to the park when the car hit them. They had to watch it happen. My daughter lives across the road. Words can’t describe how heartbroken we are.’ 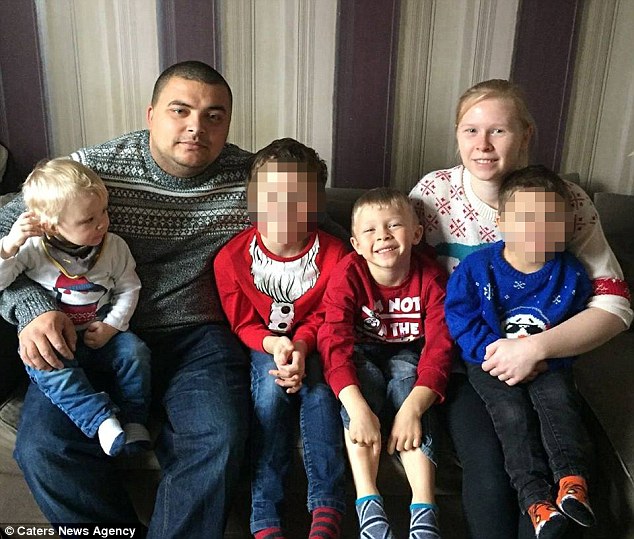 The two boys, aged four and six, are pictured with their parents Reece and Louise Platt-May

A 15-year-old Ford Focus was found abandoned with its windscreen smashed and airbags deployed a short distance from the scene of the collision following the 2pm collision. Locals said the area had been blighted by speeding drivers.

Last night police were holding a 53-year-old man and a 41-year-old woman on suspicion of causing death by dangerous driving and drink-driving.

The incident left witnesses weeping in the street and the boys’ shoes and belongings scattered across the road.

One woman who saw a couple being bundled into a police car in the aftermath of the tragedy described them as looking drunk, adding that the woman was ‘off her face’.

Another local resident who helped police search for two suspects seen fleeing from the Focus, said officers found the pair hiding in fenced-off open ground nearby.

He added: ‘The man was trying to fight with the officers and get away. The woman was really loud and seemed drunk.’ 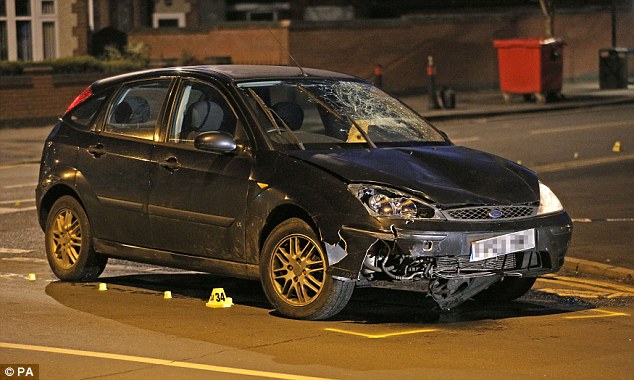 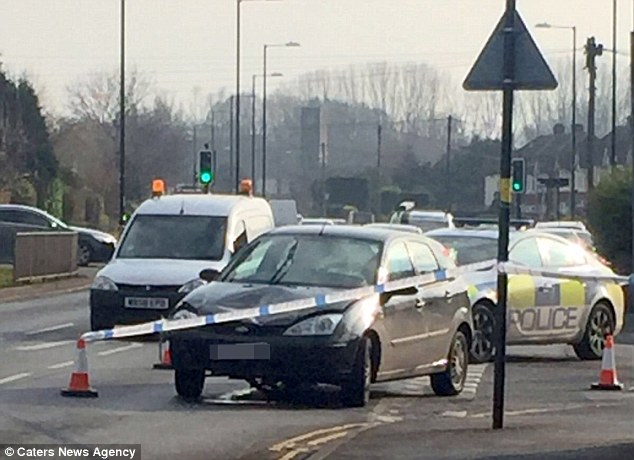 A man and woman have been arrested. Police taped off this car as part of their investigation

A local resident, who asked not to be named, described seeing a ‘smashed’ pushchair in the road, alongside a child’s scooter.

She added: ‘There was debris all over the road. I was advised not to go near as the kids were still on the road and I had my young girls.

‘It was very sad to see and the fact they ran off and hid makes it a thousand times worse.’

Another resident added: ‘It appears that the car drove for less than half a mile and the occupants then got out and ran away.’

Kodie O’Farrell said on Facebook: ‘Woman went to cross the road with her 2yr old in a pram and 6yr old holding her hand and a car sped past went over the pushchair.’ 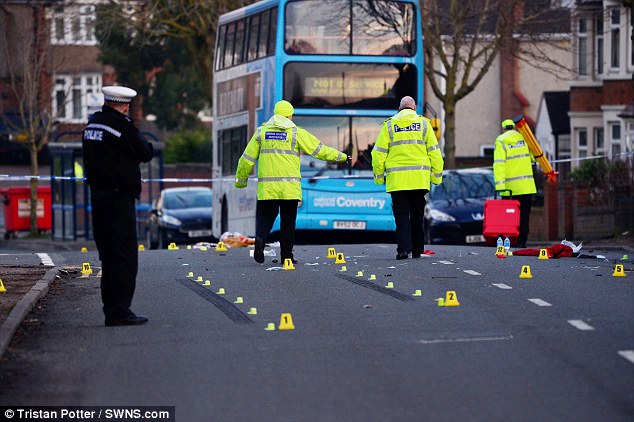 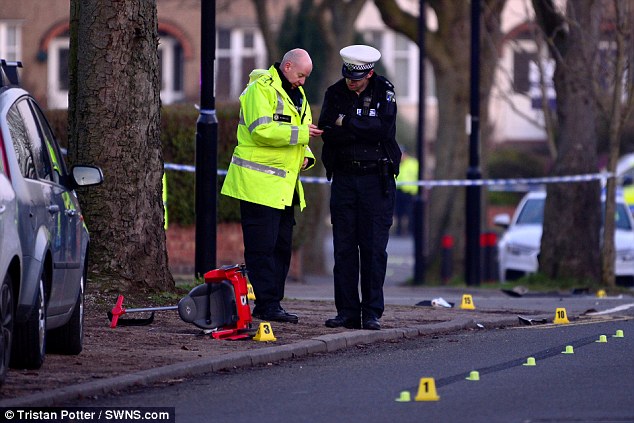 A black Ford Focus was found abandoned shortly after. Police are seen at the crash site

Wendy Baker posted that the man who emerged from the car was initially restrained by a passer-by. She added: ‘The driver kept shouting it wasn’t him driving and saying wasn’t his car and the woman was hitting a man that was restraining the driver and then they just ran off.

‘It was awful to see such pain in the family and tiny kiddies. I picked up their little shoes and hats and my heart breaks for them.’

Both boys were taken to hospital with life-threatening injuries. The toddler was pronounced dead shortly after arrival, while the older child later succumbed to his injuries at Birmingham Children’s hospital.

MacDonald Road – where the boys were hit – and the nearby Longfellow Road remained closed last night.

Posting on Facebook, Taya Stone said she has to negotiate the roads every day on the school run, adding: ‘When will something be done about the speed!!!’ Jo Taylor said her parents lived in the vicinity and called for speed humps, adding: ‘It’s like a race track.’ 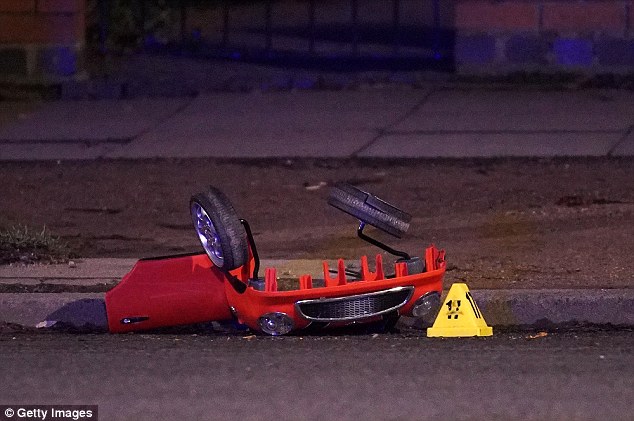 Detective Sergeant Paul Hughes, from West Midland Police’s collision investigation unit, said: ‘We are still trying to establish how this tragic incident has happened and anyone who hasn’t yet spoken to an officer should call us on 101.

‘This is a parent’s worst nightmare and it’s impossible to imagine their grief, but specialist officers will be supporting them as our investigation continues.’

West Midlands Ambulance Service said: ‘Crews arrived to find two pedestrians, both young boys, who had been seriously injured following the collision with the car.

‘It quickly became apparent they had both suffered life-threatening injuries in the incident and following emergency trauma care at the scene by our staff, they were both quickly transported to hospital on blue lights.

‘Unfortunately, shortly after arrival at hospital it became apparent nothing could be done to save one of the boys and he was confirmed deceased.

‘The second boy was taken to Birmingham Children’s Hospital and accompanied by the air ambulance crew who helped to administer specialist treatment en-route.

‘The boy’s condition was described as critical on arrival at hospital.’ 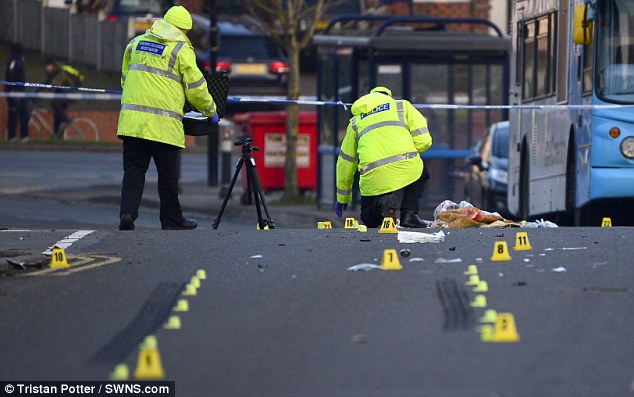 Witnesses have told how members of the public restrained the driver and passenger as they tried to flee the scene.

One man said: ‘I heard screaming and a car revving off, I only saw the back of the car screaming around a corner and it was suddenly surrounded by people.

‘A guy shouted ‘it’s them’ and suddenly he had the car door open and was trying to snatch the keys.

‘The driver looked like he was trying to wrestle the keys away. From what I could make out, another person stood in front of the car to stop him driving off.’