Nashville has always been a hot destination for music lovers, but now it’s scorching, thanks to Justin Timberlake and his stunning new entertainment venue – The Twelve Thirty Club, which has made its full debut.

The Cry Me A River singer spearheaded the development of the Broadway venue with restaurateur Sam Fox. A ground-floor bar, The Honky Tonk, opened its doors in April. A 50-person mezzanine cocktail lounge, Honorary Member – accessed by a ‘striking centrepiece staircase’ – was opened during the summer. Now, a ‘dapper-as-hell’ 400-seat Supper Club on the second floor, along with a rooftop bar, is open for business.

Newly released pictures show that the entire set-up is stunning.

The Supper Club, pictured, is ‘a modern take on a classic, 19th-century supper club’ 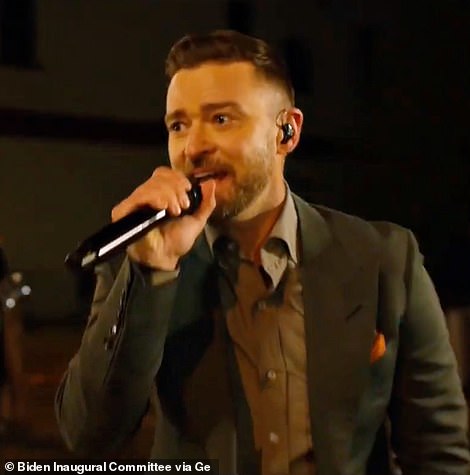 The Supper Club comes complete with opulent chandeliers, mood lighting and red velvet seating – and a stage for ‘undiscovered acts and music’s biggest stars’ to perform.

Of the unveiling, Timberlake says: ‘Nashville is a city unlike any other.

‘Sam and I wanted The Twelve Thirty Club to stand out and celebrate the different people and cultures that make this place so special.

‘It’s stylish and sophisticated, but still has an unmistakable energy driven by music. We aim to set the tone for what Upper Broadway is and what it has the potential to be. It has been really cool to see it all come together.’

The Supper Club’s decadent décor, by interior design firm AvroKO, was inspired by the Art Deco movement of the 1920s.

A statement from the club says the eatery is ‘a modern take on a classic, 19th-century supper club where dining, entertainment and design collide to create a fanciful, dynamic experience like none other’.

There are burgundy curtains draped over the windows and the walls, which are adorned with a hand-painted mural of a forest. The bar is ‘zinc-accented’ and layered with emerald green tiles. And patrons can take a seat in crescent-shaped booths made from tufted leather and that feature copper inlays.

A pathway leads to the stage, where the musicians are invited to perform as patrons dine. 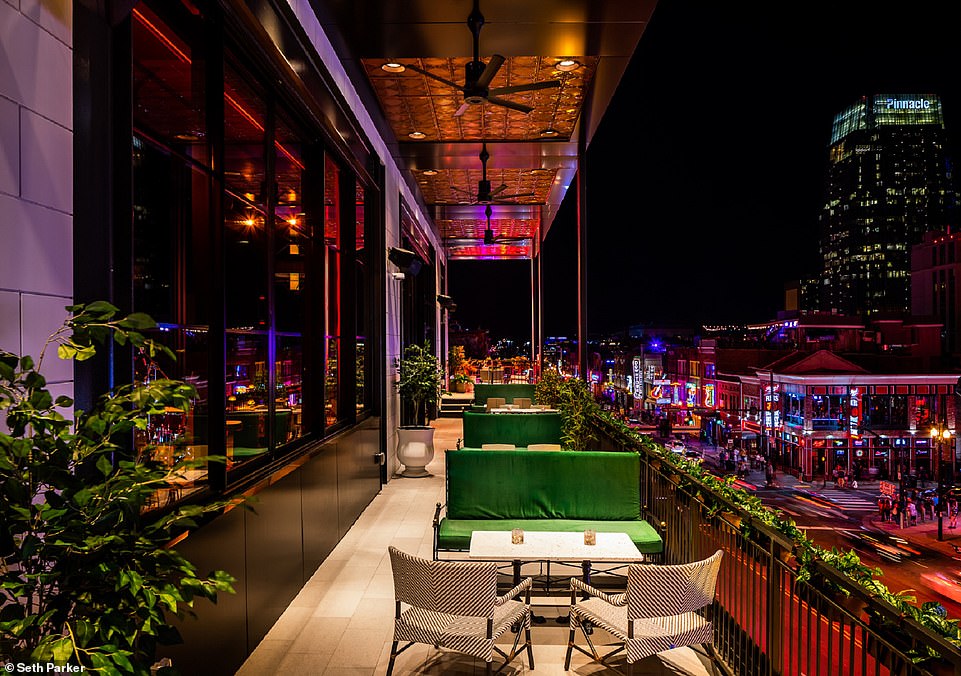 Pictured is the outdoor seating area of the Supper Club. Its unveiling signaled the grand opening of the three-storey restaurant, bar and music venue 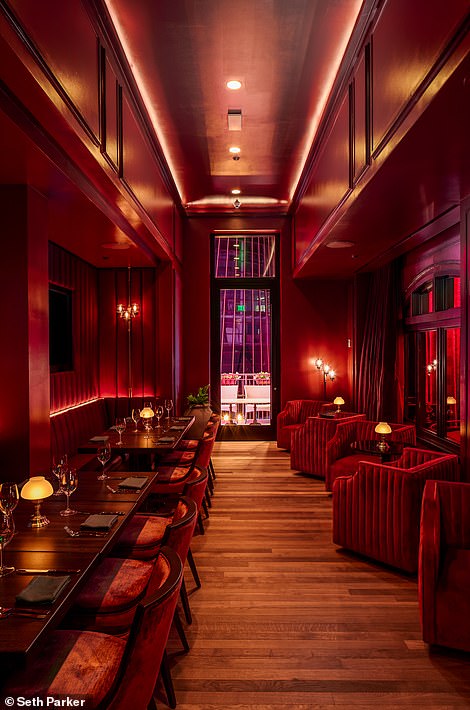 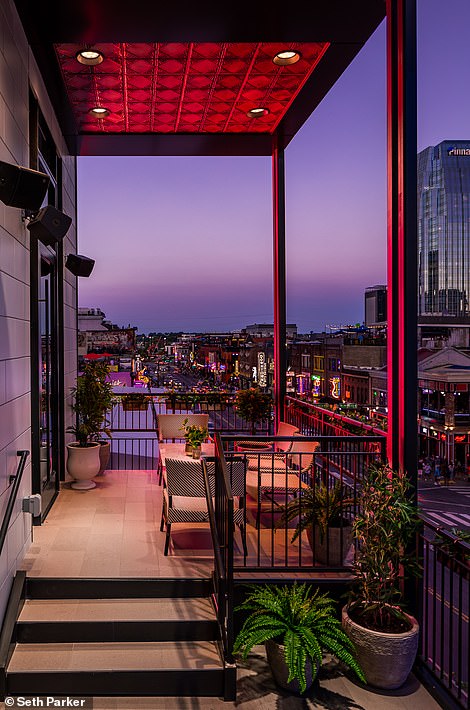 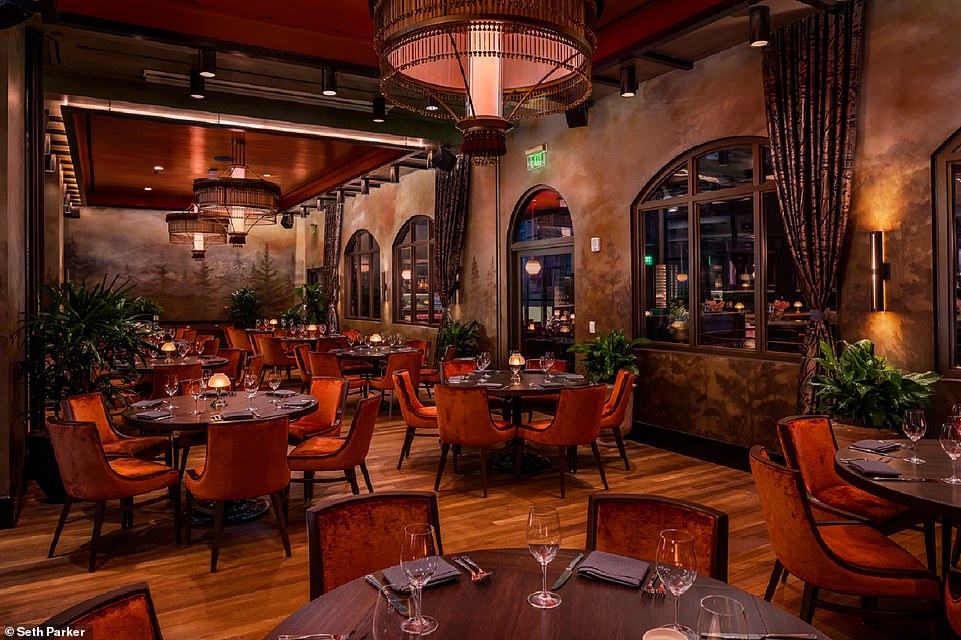 As for the menu, guests can opt to order from the ‘over-the-top raw bar’ – which serves the likes of pressed yellowtail and avocado sushi and west coast oysters.

Not a big steak eater? Dishes like ‘magic’ iceberg wedge salad, crispy stuffed chicken with prosciutto and lobster spaghetti ‘al limone’ are also whipped up in the kitchen. 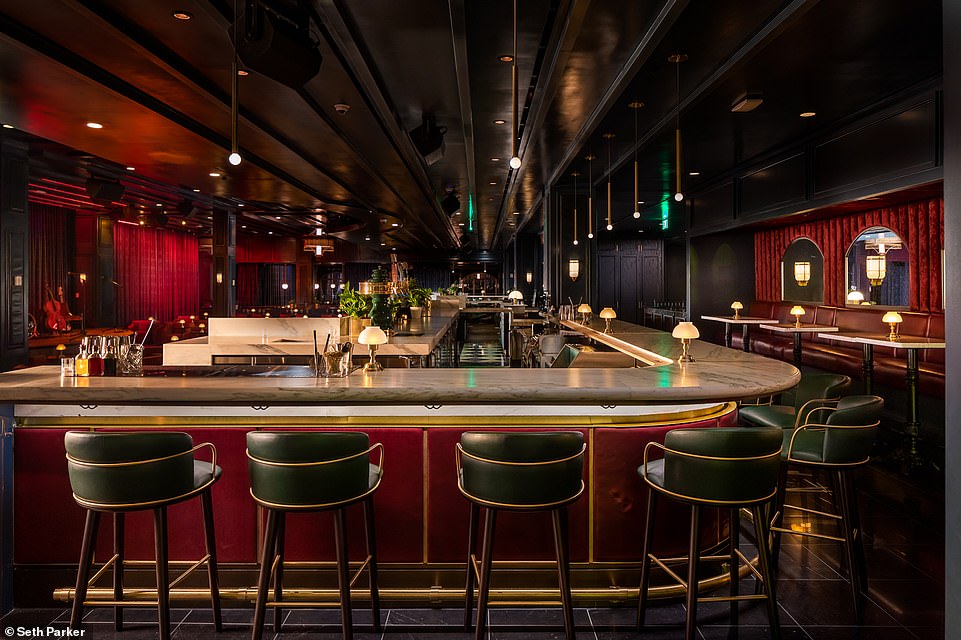 The Supper Club’s bar, pictured, is ‘zinc-accented’ and layered with emerald green tiles 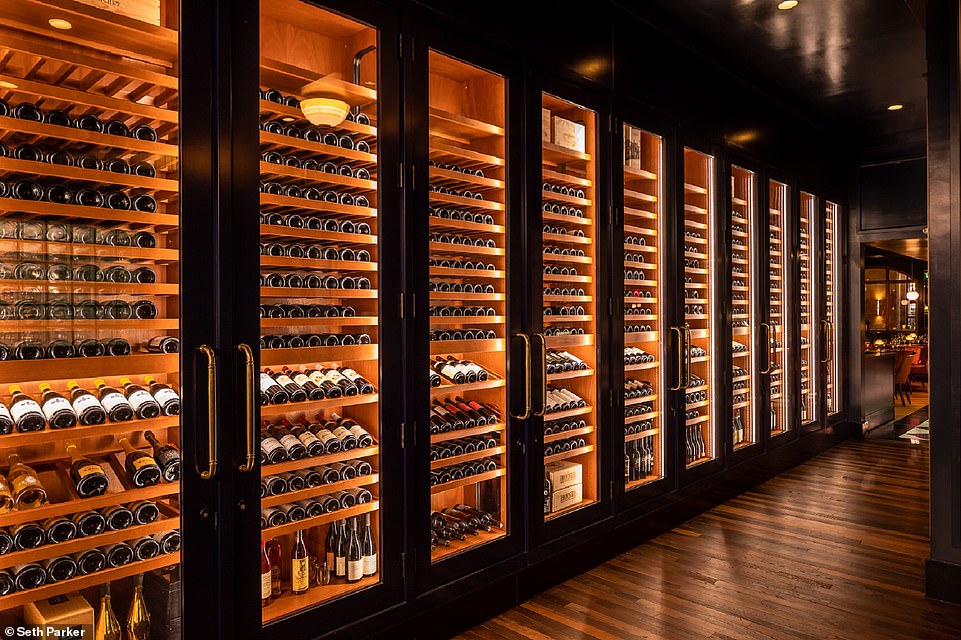 The restaurant’s wine collection encompasses over 1,800 bottles, ranging from Provencal rose to vintage magnums of Napa Valley Opus One 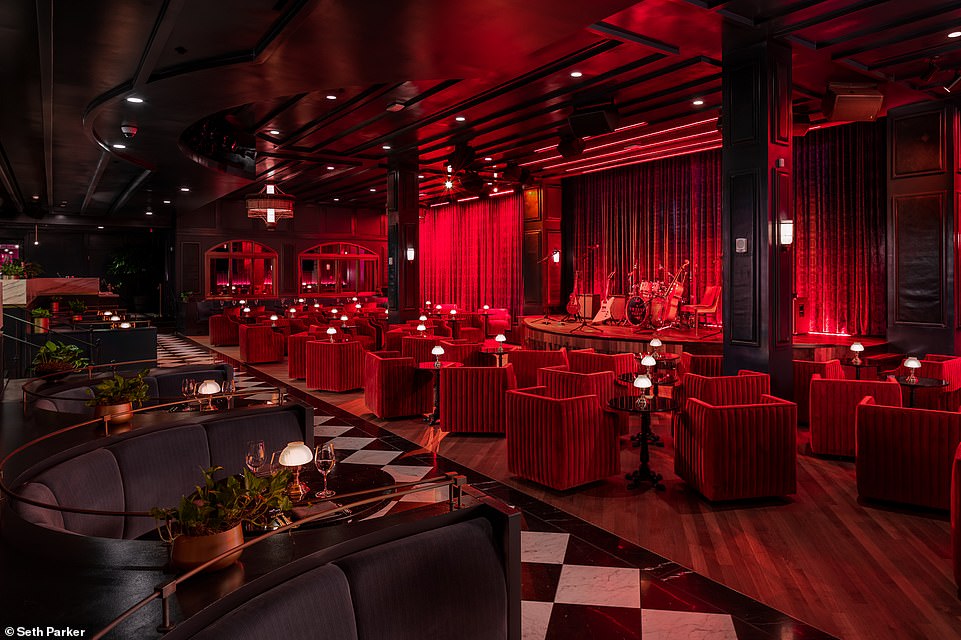 The bar also serves two types of cocktails – classic and craft. The latter are made using ‘house-made infusions, fresh ingredients, and rare spirits’.

The club’s rooftop bar, with its bright yellow colour palette, was unveiled at the same time as the Supper Club. It offers views of The Ryman, Bridgestone Arena and Lower Broadway. 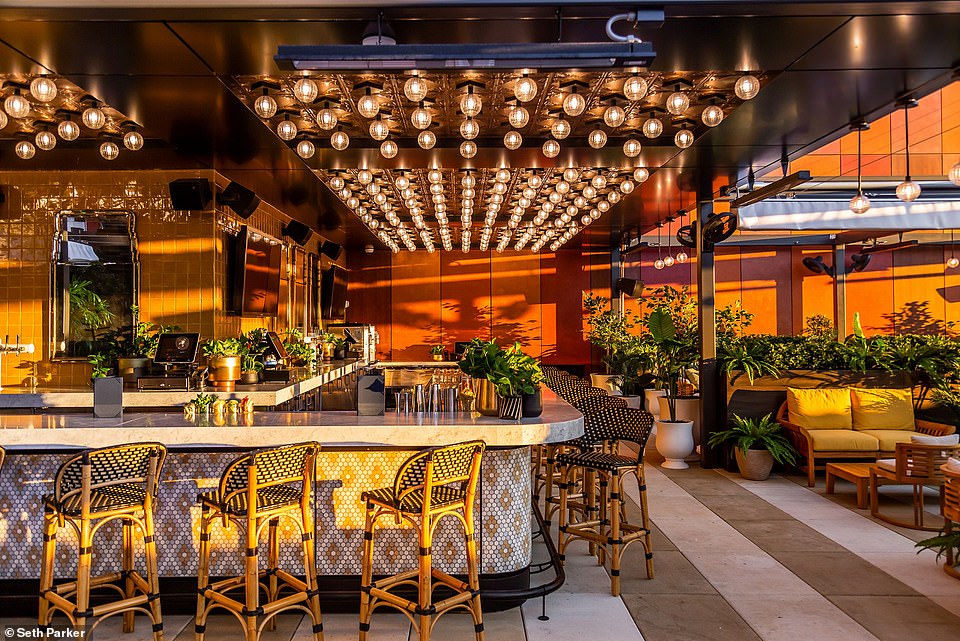 ‘The ultra-chic, garden-style outdoor setting invites guests to toast the night away under a canopy of stars,’ the club says of the rooftop area 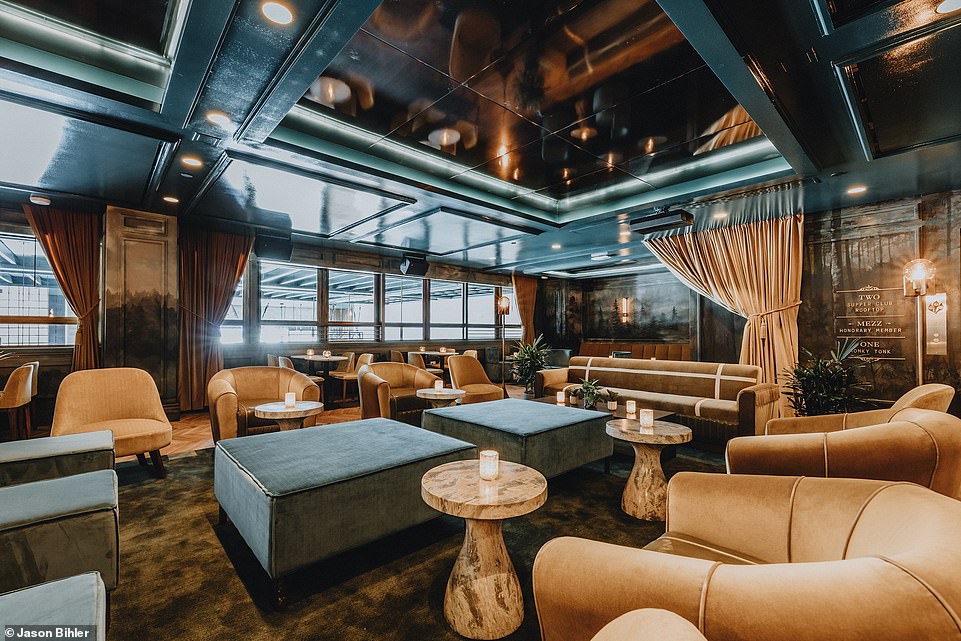 The club says: ‘The Rooftop Bar is for those who need a sip of air – and something a little more potent. The ultra-chic, garden-style outdoor setting invites guests to gather and toast the night away under a canopy of stars while listening to the latest DJs.’

The opening of Honky Tonk, meanwhile, was described as a ‘rousing success’, with the venue offering live music nightly from Nashville’s rising and well-known stars.

Honorary Member, we’re told, is where ‘elegant meets casual’ in the design department and where guests’ temper the energy of the first level without leaving it entirely’. 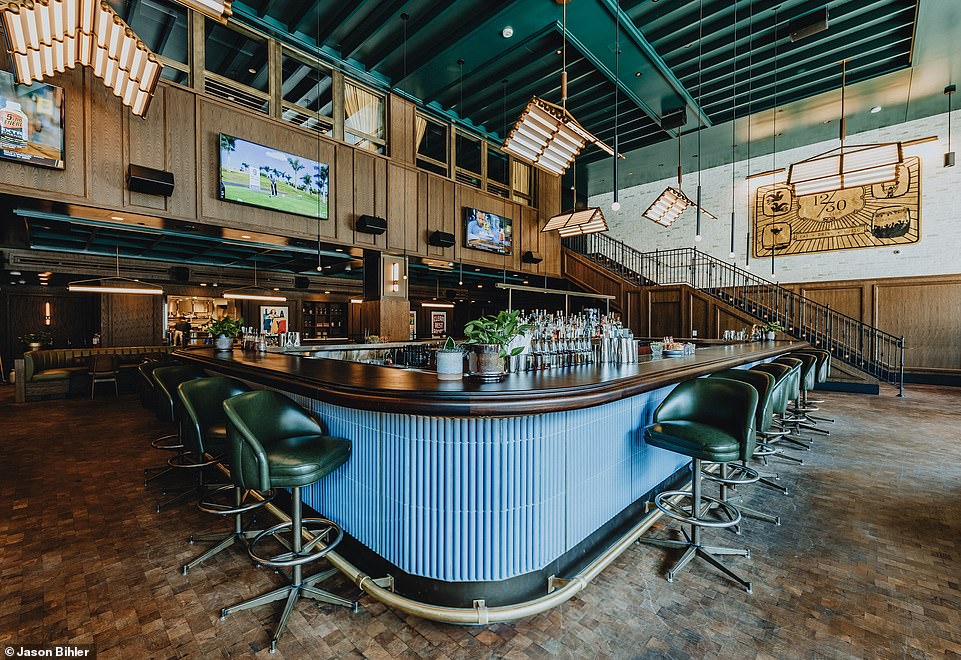 The ground-floor bar, The Honky Tonk, pictured above, opened its doors earlier this year 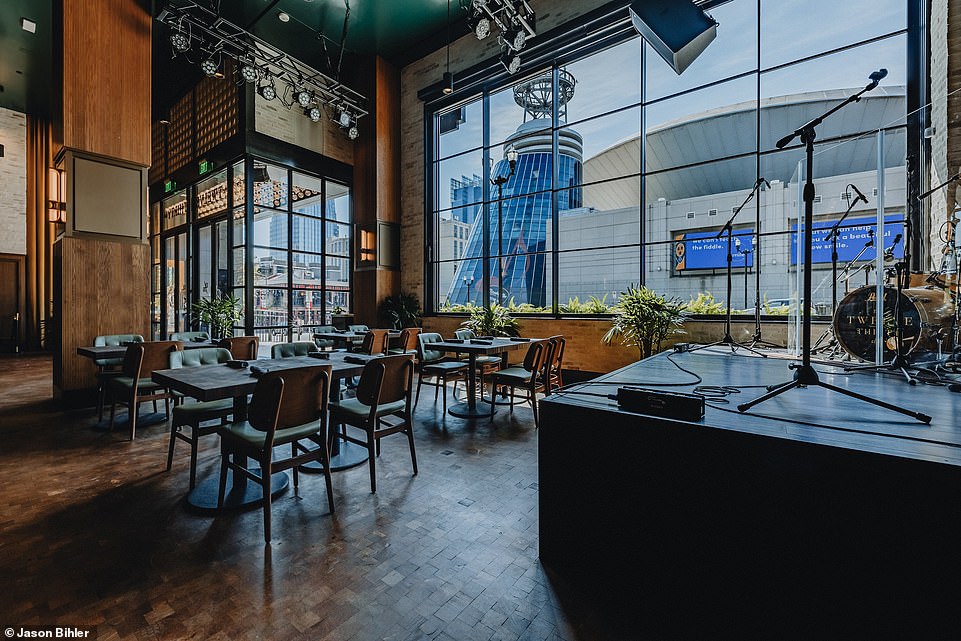 Nashville musicians, DJs and guest acts take to the stage nightly in the ground-floor bar 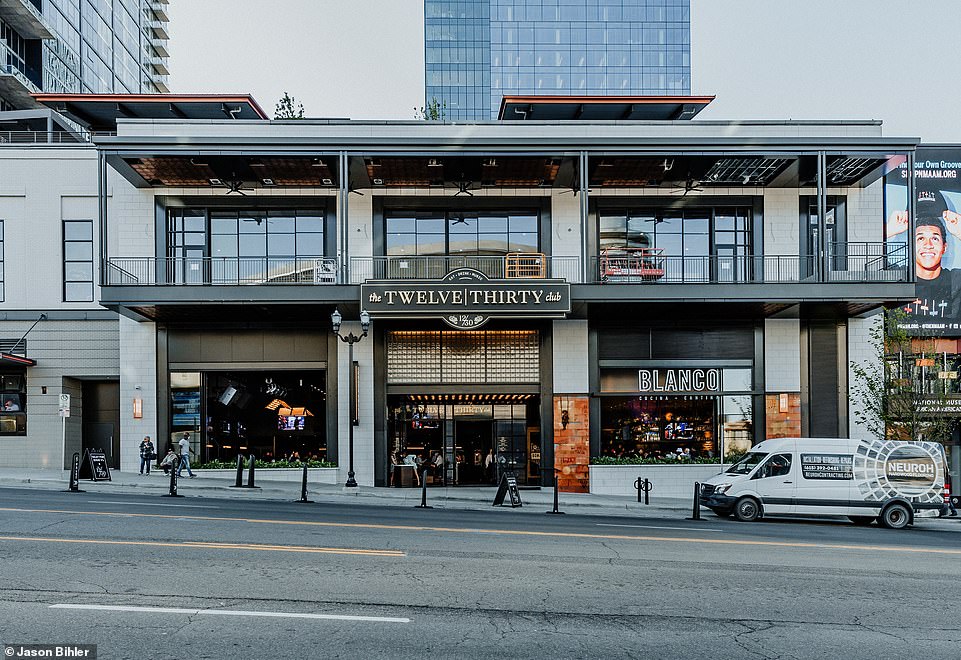 Sam Fox, the founder of Author & Edit Hospitality, says: ‘Years of labour and love went into finely crafting every detail of this truly immersive experience.

‘Each level of The Twelve Thirty Club is completely unique unto itself when it comes to the menu, cocktail program and design. We hope that our guests will be swept away and lose themselves in the music, style, unbelievable dining and service and want to return again and again.’

To book and for more information, visit TheTwelveThirtyClub.com.