The man found dead in a Manchester city centre hotel room after another man fell to his death in ‘murder-suicide’ has been named by police.

Thomas Noakes, 29, from Eccles, Salford, was found in a first-floor room at the Britannia Hotel on Wednesday.

The body of a second man who fell from the sixth floor window of the hotel building at 5.30am was identified as 21-year-old Hayden Fitzpatrick.

The family of Mr Noakes paid tribute to him and said he was ‘the life and soul of the party.’

Pictured: Thomas Noakes, 29, from Eccles, Salford, was found in a first-floor room at the Britannia Hotel on Wednesday

They said: ‘He was a much loved son, brother, brother-in-law, uncle, cousin and friend.

‘It is with great difficulty that his friends and family have to say goodbye to someone who touched so many lives, and was loved by everyone he met.

‘He will be missed so much but never forgotten for the fun, loving and caring person that he was.’

Police were called after Mr Fitzpatrick fell from the hotel prompting police to launch an investigation and close off surrounding roads.

Detectives found the man at the back of the hotel, before then discovering Mr Noakes inside a room causing forensics to search for clues. 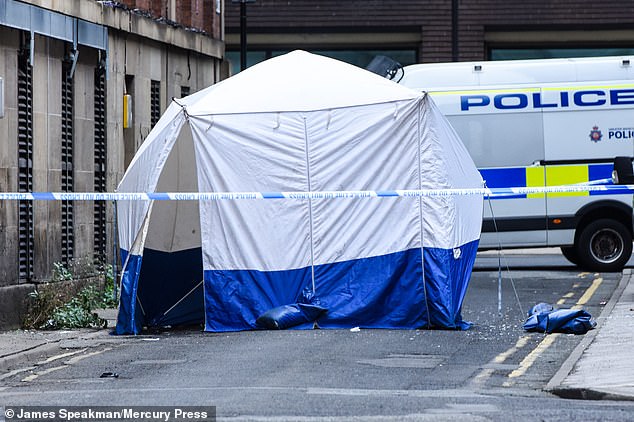 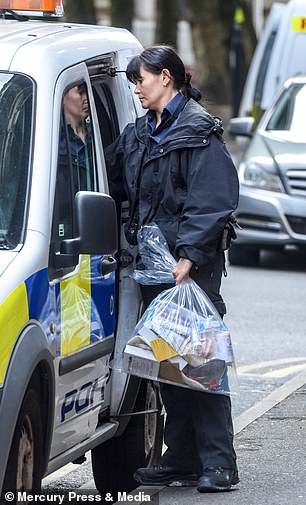 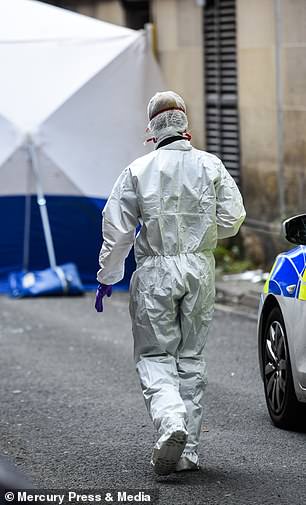 The death of Mr Noakes is being treated as suspicious.

Police said they were not looking for anyone else in connection to the incident.

Police declined to tell MailOnline if the men were found in the same room or whether they knew each other.

Photographs show shards of glass across the road where the body was discovered, as curtains flapped from a window above which is thought to have been smashed.

Witnesses told of a large police presence around the hotel, with officers telling members of the public to avoid the area. 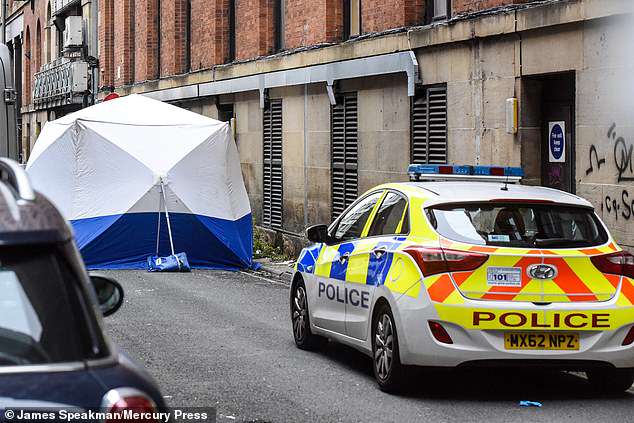 Hotel guest James Milner, from Hull, East Yorkshire was staying at the Britannia for the night following a Rugby League awards dinner.

When he returned to the hotel he saw the roads were taped off, but the fifth floor, on which he was staying, had not been at that stage.

He told Mirror Online: ‘The roads were all taped off and full of police outside when I arrived back and the hotel was checking for proof of residency at the door to get in.

‘This morning I left my room and the lift area was all taped off, the window was wide open and the curtains blowing and there was an iPhone on the floor with headphones plugged in. I gave my details to the police and that’s all I saw.’

Twitter user Dan (@Whammertime2) posted a picture of a police tent erected at the scene, saying: ‘Looks like some poor soul has jumped out of the Britannia Hotel.’ 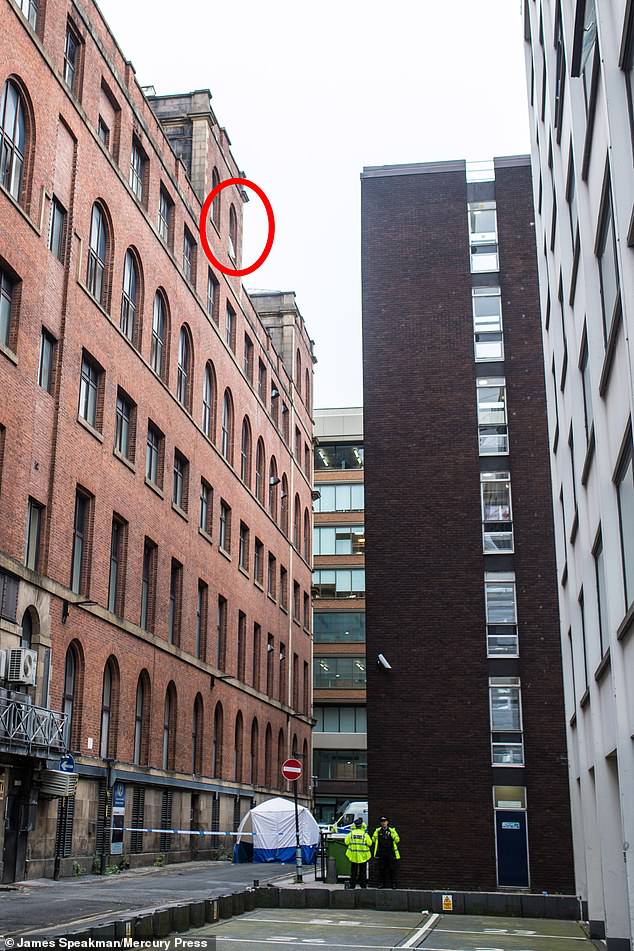 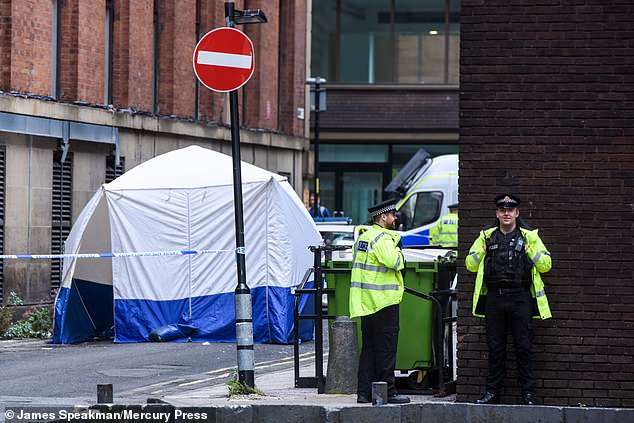 Detective Chief Inspector Amber Waywell, from Greater Manchester Police’s major incident team, said: ‘We are continuing to investigate the circumstances of this incident and a scene remains in place on Silver Street.

‘The investigation is still in its early stages but we are not currently looking for anyone else in connection with this incident.

‘I would urge anyone with information that could assist our investigation to please get in touch as soon as possible.’

A Greater Manchester Police spokesman said: ‘Shortly after 5.30am this morning police were called to Portland Street to reports that a man had fallen from a building.

‘Officers attended but the man, who is believed to be in his 20s, sadly died at the scene. It is believed that he fell from the fifth floor of the Britannia Hotel. 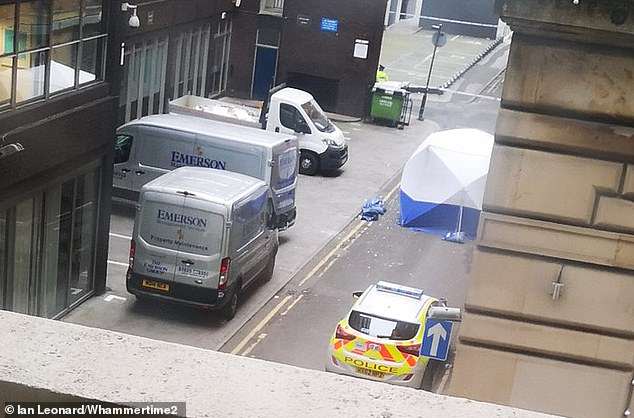 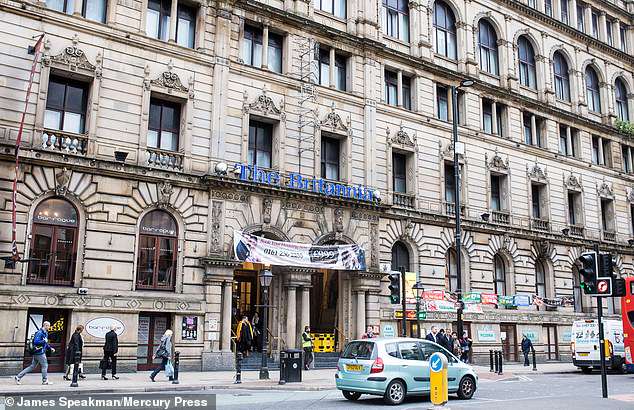 The man fell from the Britannia Hotel in Manchester city centre, which is pictured today

‘Officers investigating the incident then gained entry to a room on the first floor of the hotel and found another man who was sadly pronounced dead at the scene.

‘His death is being treated as suspicious, and officers are currently working to establish the identity of this man and contact his next of kin.’

A spokesman for Britannia Hotels said: ‘Our thoughts and condolences are with the families concerned and we are liaising with police and providing assistance to them during their investigation.’

The Grade ll-listed Britannia Hotel, which has 363 bedrooms and dates back to the late 19th century, is known for its cast iron staircase and huge chandelier.

The building was originally construction in 1868 as a cotton warehouse, before it was bought by Britannia Hotels in 1979 and turned into a hotel.

For confidential support in the UK, call the Samaritans on 116123 or visit a local Samaritans branch. See samaritans.org for details.