Tube passengers were today still flouting face mask rules a week after it became law to wear them on public transport.

Commuters on the Jubilee Line were pictured this morning without a face covering, despite the threat of a £100 fine or being kicked off the train.

Others were seen with a mask hanging down from their chin, even though they only work properly – by blocking exhaled droplets – if they cover the wearer’s mouth and nose.

Thousands of face masks have been handed out to Tube and train passengers across England after it became compulsory to wear them on all forms of public transport to reduce coronavirus infection rates.

London Mayor Sadiq Khan was criticised for scenes of packed Tube carriages in the first three months of the lockdown, so he faces intense pressure to prevent the transport system contributing to a deadly second wave.

Transport for London insists there is a ‘high level of compliance’ with the new law and police have been told to only issue fines as a ‘last resort’. MailOnline has asked TfL and the British Transport Police how many fines have been issued so far.

Several commuters were seen without face masks on the Jubilee Line on the London Underground this morning. Rule breakers risk a £100 fine or being kicked off the service 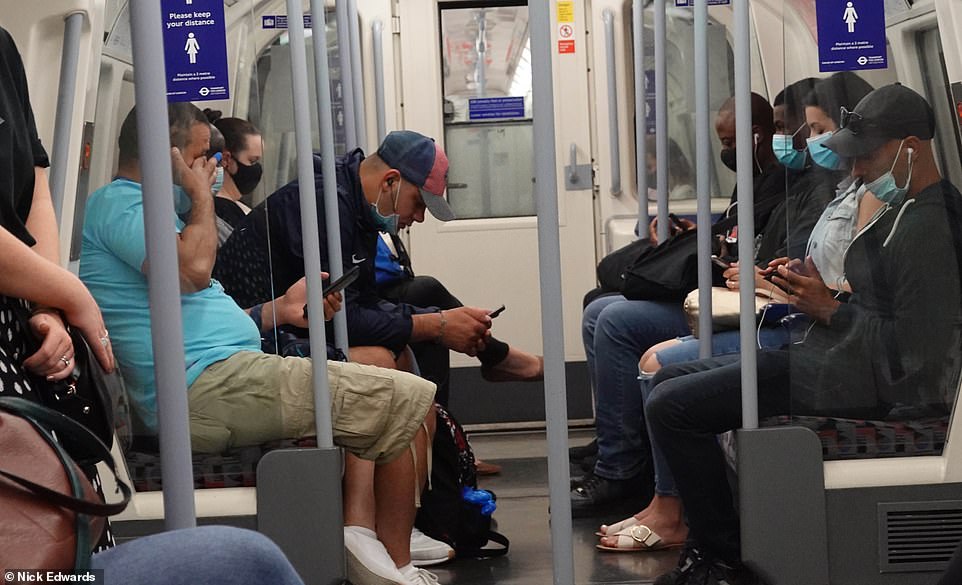 Some people were wearing masks but had them hanging over their chin, rather than the mouth, like this man on the Jubilee Line this morning (pictured) 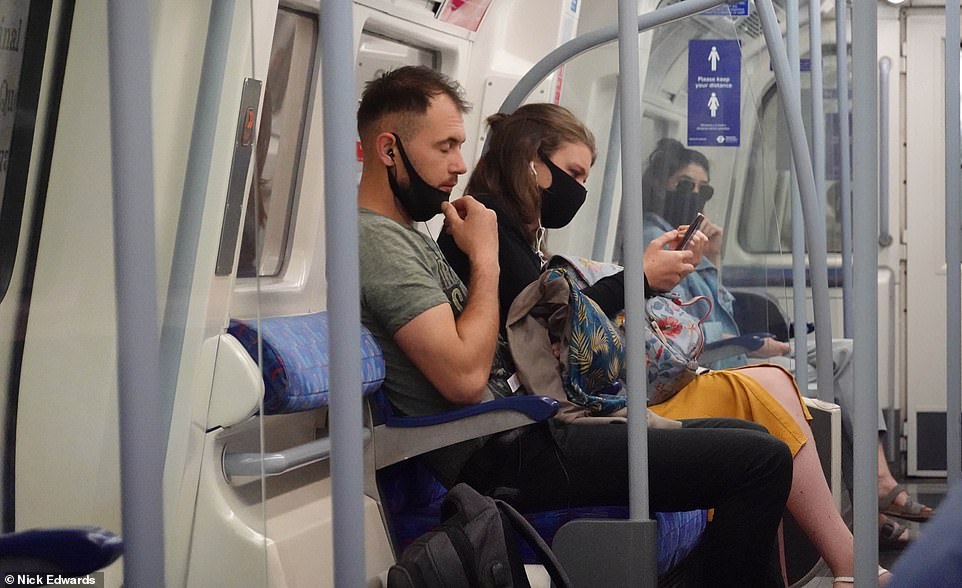 Thousands of face masks have been handed out to Tube and train passengers across England after it became compulsory to wear them on all forms of public transport. Pictured is a man on the Jubilee Line today

Police have been given powers to pull passengers off Tubes, trains and buses if they refuse to wear face masks.

Some 3,000 British Transport Police (BTP) officers have been deployed to the busiest railway stations to make sure all passengers are complying with the new rules.

Guidance gives constables the power to use ‘reasonable force’ to remove rulebreakers from public transport if necessary.

Those that flout the restrictions risk £100 fines but these should only be issued as a ‘last resort’, according to the guidance from the National Police Chiefs’ Council and the College of Policing.

Police will take a soft approach over the next week with passengers gently reminded of the new rules, but are likely to resort to tougher enforcement later in the month as passenger numbers continue to rise.

The new rules have been enshrined under the same public health legislation used to fine people who flouted lockdown rules at the beginning of the outbreak. This means it is the responsibility of police, and not transport staff, to enforce them.

Last week, TfL said that around 80 to 90 per cent of passengers using its Tube services were wearing masks. 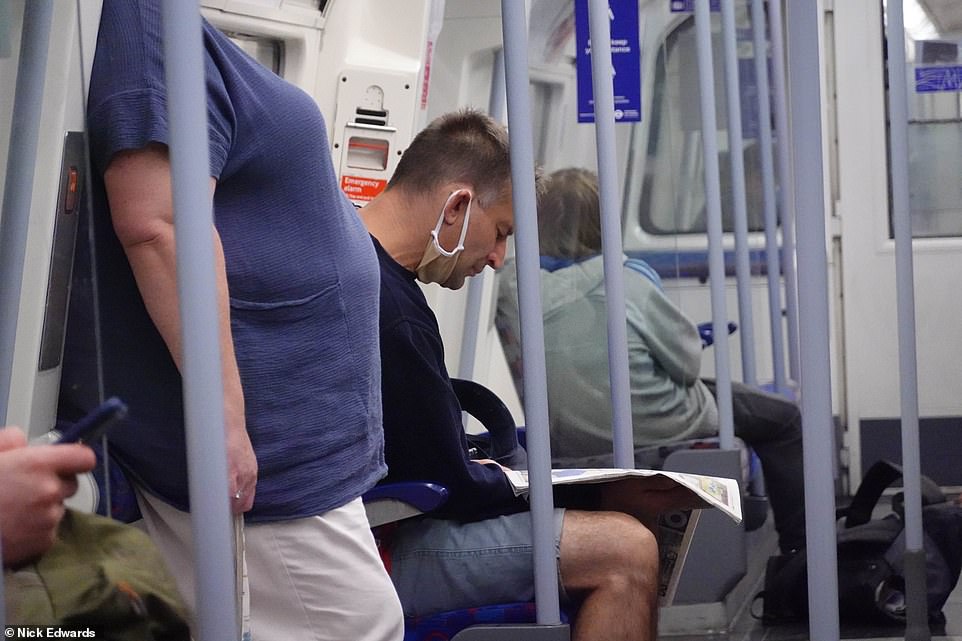 Another man pictured this morning on the Jubilee Line with a face mask hanging down from his chin. Masks only work properly when they are covering the mouth and nose 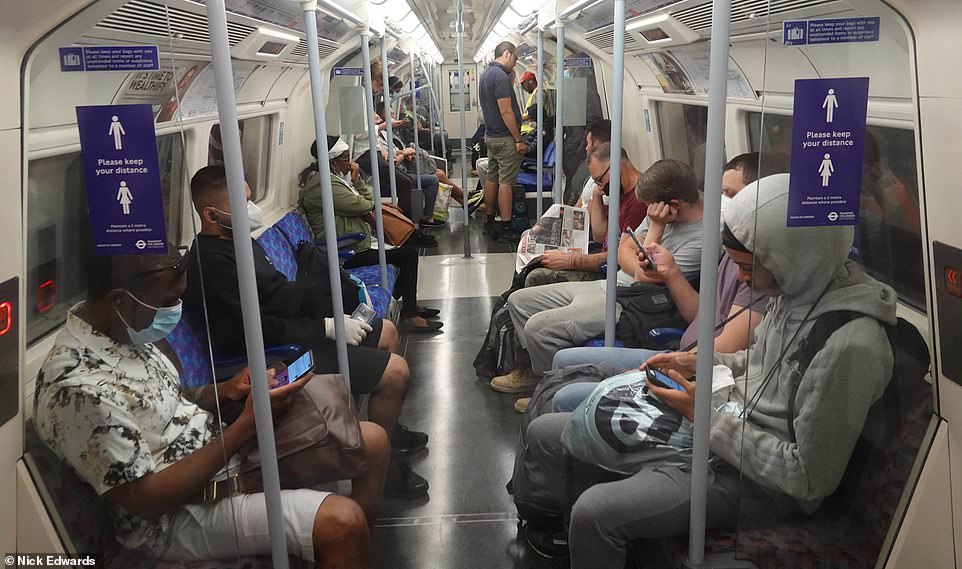 Transport for London insists there is a ‘high level of compliance’ with the new law and police have been told to only issue fines as a ‘last resort’. Pictures taken today suggested that most people are obeying the new rules 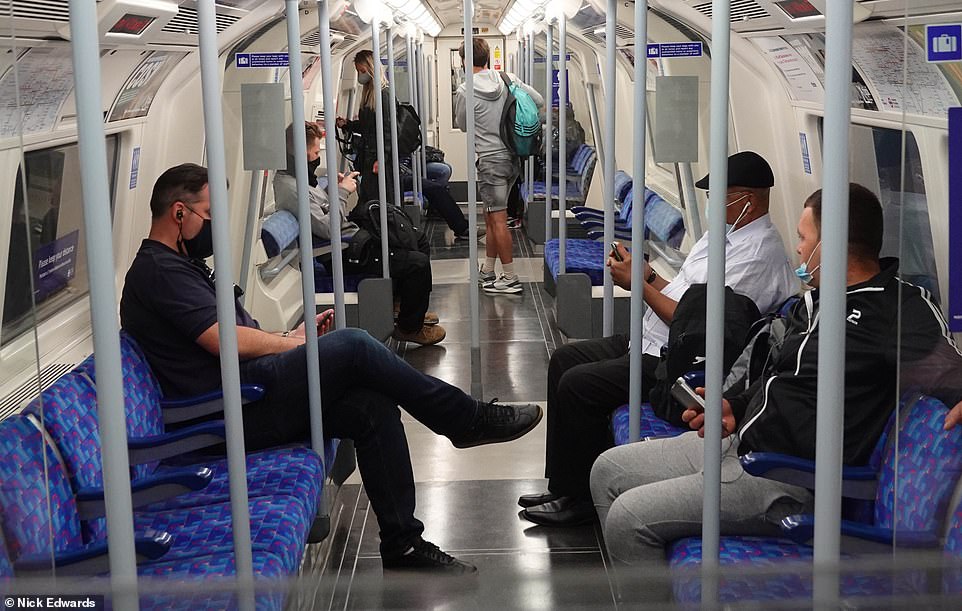 London Mayor Sadiq Khan was criticised for scenes of packed Tube carriages in the first three months of the lockdown, so he faces intense pressure to prevent the transport system (pictured today: the Jubilee Line) contributing to a second wave 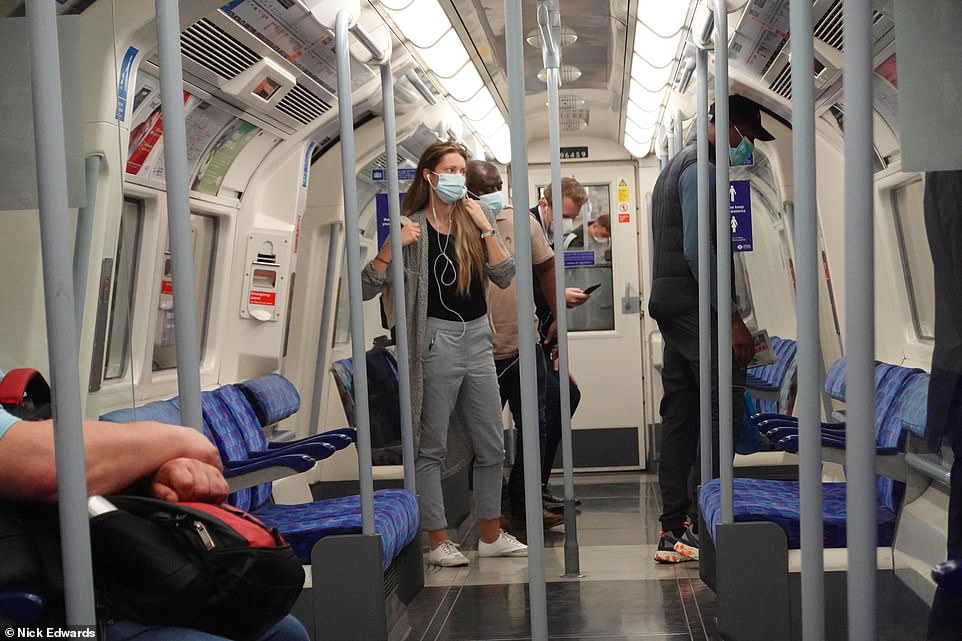 The new rules have been enshrined under the same public health legislation used to fine people who flouted lockdown rules at the beginning of the outbreak. Most commuters on the Jubilee Line this morning were seen with a proper face covering

Boris Johnson is hoping preventative measures like compulsory face masks on public transport will reduce infection rates while allowing the country to ease out of the economically-crippling lockdown.

Tomorrow, the PM is set to announce the expansion of household bubbles, suggesting millions of grandparents may get to squeeze their grandchildren again soon.

Current guidelines allow for groups of up to six to meet in the open air, while staying over two meters apart. Only those living together, or who have chosen to expand their ‘support bubble’ to include one other nominated person from another household, can touch or be closer than two meters.

This has caused tough choices for parents forced to decide which grandparent their children can visit. However this could soon be alleviated if an eased policy is approved, such as an unlimited merging of two households within a bubble.

A senior government source told The Telegraph: ‘There will be an expansion of social bubbles, but the details are still being finalised.’

Another possibility could be to allow households to merge with a limited number of people from more than two different households, to ensure families are not forced to choose which set of grandparents get their hugs.

A second government source said: ‘The question with bubbles has always been how you help families reunite to the maximum possible extent without too much risk. The scientists’ main concern has always been infections spreading from one household to another, which is why this is one of the more difficult decisions we have to take.’ 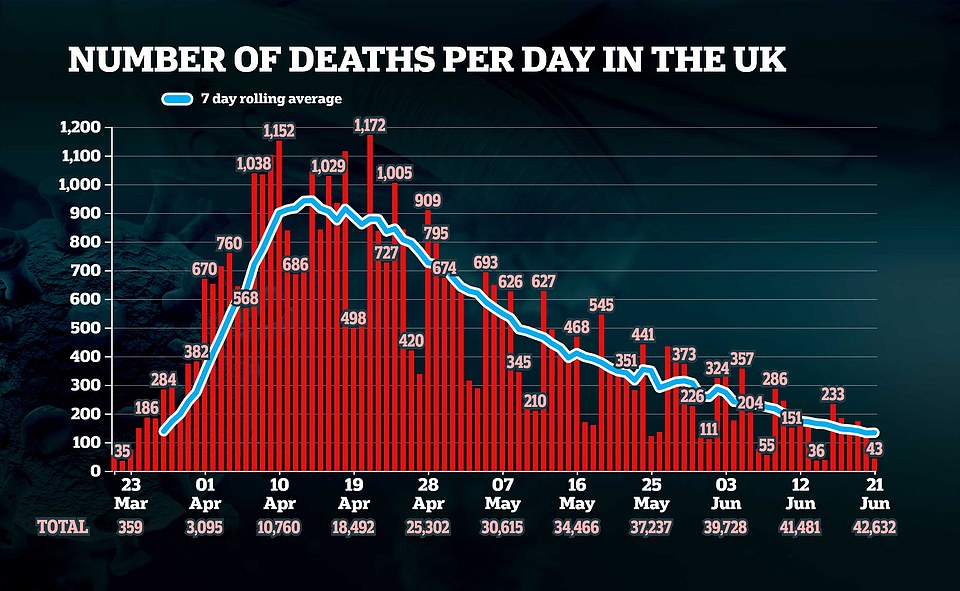 Another 43 victims of the coronavirus were confirmed across the UK on Sunday, taking the total number of people to have died so far to 42,632

Tuesday’s announcement is expected to be another step towards the eventual easing of lockdown, with pubs and restaurants also expected to reopen by July 4.

Speaking yesterday Boris Johnson insisted coronavirus is ‘increasingly under control’ as he prepares to unveil a new ‘one metre plus’ rule within days and give Britons the green light for holidays and haircuts.

The PM said there is ‘not much more to wait now’ for movement on lockdown as he looks certain to halve the social distance in a crunch speech on Tuesday – with the caveat that other precautions such as face masks must play a bigger role.

He stressed he is ‘sticking like glue’ to the roadmap that from July 4 will permit hairdressers in England to roll up the shutters.

The UK holiday season is also expected to start within a fortnight when Mr Johnson gives permission for hotels and vacation parks to reopen.

Meanwhile, Chancellor Rishi Sunak is preparing another huge package of tax cuts and spending to revive UK plc after lockdown. VAT is set to be slashed as part of efforts to prop up struggling businesses and stave off mass unemployment. 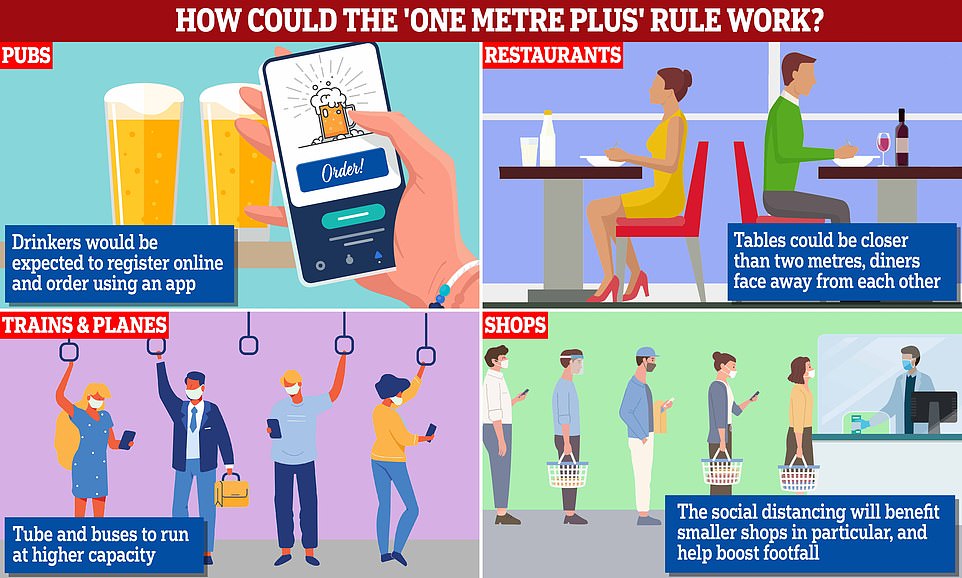