Pictured: Woman stabbed to death in a Manchester flat

Danielle Richardson, 24, has been named as the woman killed in a Manchester flat. A blood-soaked man was later seen leaping out of the window

A woman stabbed to death in a second-floor Manchester flat before a blood-soaked man was allegedly seen leaping out of the window onto a car below has been named.

Danielle Richardson, 24, died from stab wounds following an attack in the Ancoats area of the city on Tuesday morning.

A 37-year-old man has been arrested on suspicion of murder and remains under arrest while receiving treatment in hospital.

Before Ms Richardson was found dead, witnesses reported seeing a ‘blood-soaked’ man leap from the Shush Apartments, on Swan Street, at around 7.40am on Tuesday morning.

He jumped from a second-storey window and landed on a Hyundai i30, which was being parked up on the road by a family.

Ben Sheridan, 28, was travelling inside the car with his mother Lynn and dad, Peter, when they were allegedly attacked by the man, who plunged 40ft from a second-floor apartment. 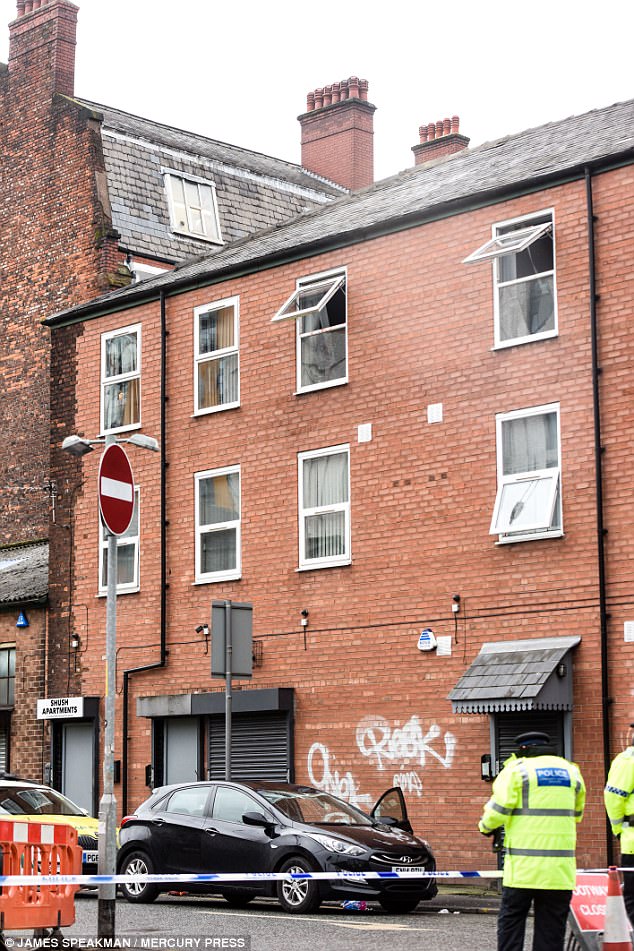 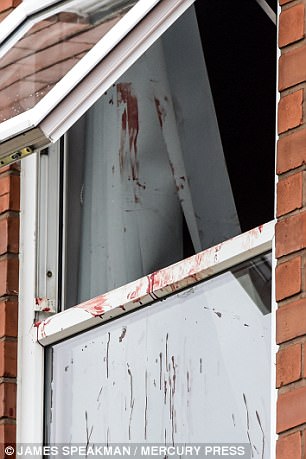 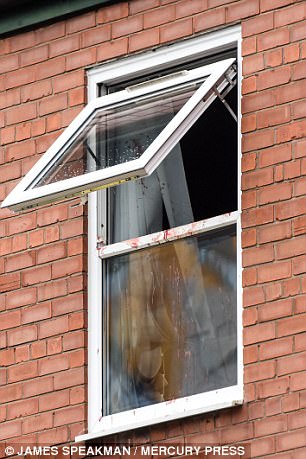 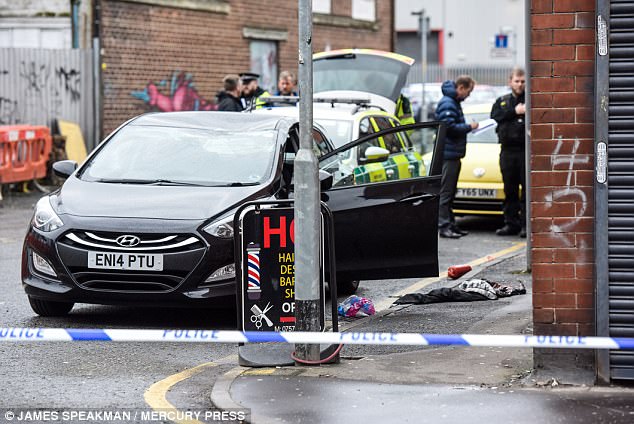 The family from Radcliffe, Greater Manchester, had just parked up and were preparing to go to work when they felt a huge bang on the roof and realised a man had fallen from the window above.

They initially jumped out to help him but they say the man started to attack them.

Ben, 28, a web developer, said: ‘A guy jumped out of the window onto our car, tried to steal it and then he’s run off. He attacked a few other people and then smashed a few other cars up as well.

‘Our car crumpled and we just tried to help him to see if he was all right.

‘I tried to call the police and was a bit panicky and then he just tried to jump in the car from the passenger side as we were getting ready to leave.

‘He hit my mum a couple of times. She is being checked by paramedics but is fine.

‘He was off his head on something, covered in blood and those windows are as well. He kept shouting a name like Tim but I was fumbling trying to call the police.’

His father added: ‘It’s the first time I’ve ever had to fight. My wife has a huge lump on her face. We are all very shaken up.’ 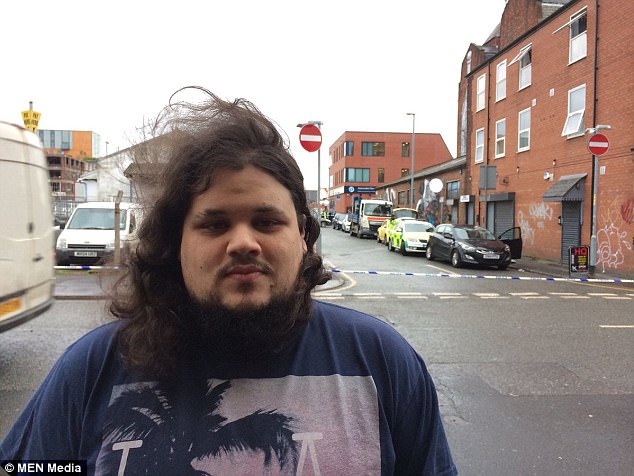 Ben Sheridan (pictured) was travelling inside the car with his mother Lynn and father, Peter, when they were attacked. The family had just parked up and were preparing to go to work when they felt a huge bang on the roof and realised a man had fallen from the window above 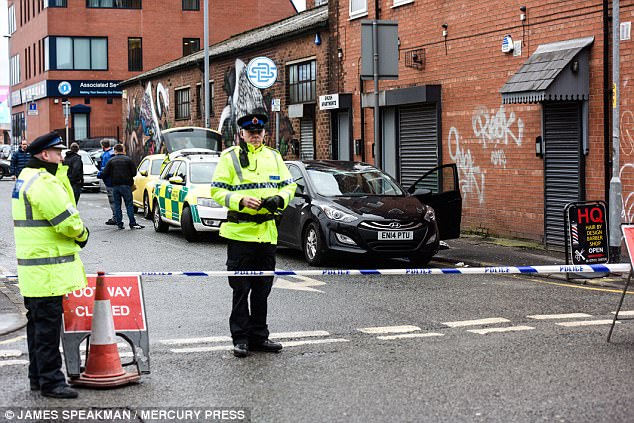 The suspect is then said to have run down the street, reportedly assaulting other people before eventually being ‘pinned to the ground by officers covered in blood’ 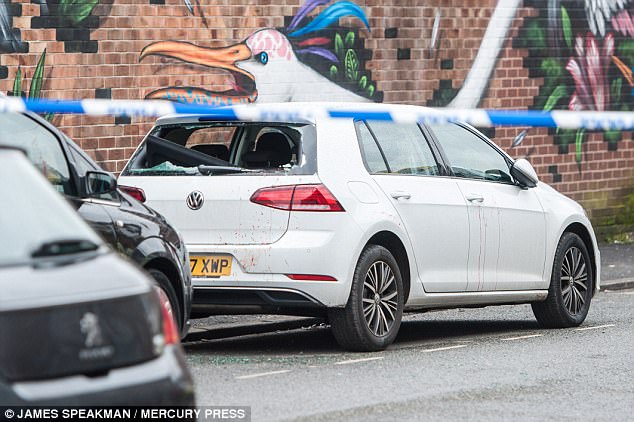 Mr Sheridan said the man then ran down the street, smashing the window of another car with his hands and ‘assaulting people’.

Police arrived and pinned a man to the ground before arresting him.

When officers went to the Shush Apartment flat, Ms Richardson was found dead.

A Home Office post-mortem examination has confirmed she died from multiple stab wounds. 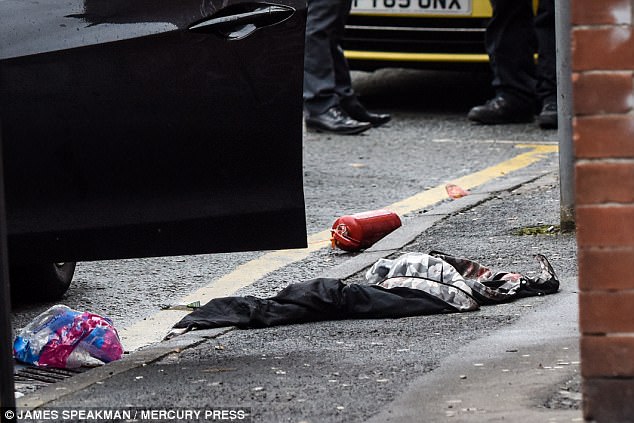 Senior Investigating Officer Andy Butterworth, of GMP’s Major Incident team, said: ‘This was a horrific attack on an innocent woman and we have a team of specialist officers supporting her family at what is understandably a very difficult time.

‘Our investigation is currently ongoing and a scene remains in place on Swan Street so you will see officers in the area.

‘I would continue to urge anyone with any information to please get in touch so that we can continue to build a picture of what happened yesterday morning.’

Anyone with any information is asked to call police on 101, quoting reference number 327 of February 13.