A man has revealed the split-second decision that saved his life when he was attacked by a three-metre shark – and how ‘something didn’t feel right’ in the sea before the attack.

Brett Highlands, 48, was spear-fishing with friends 50 kilometres north of Broome in Western Australia on Friday morning when the shark bit him in the arm twice.

After the second bite, Mr Highlands stabbed the shark in the stomach with his spear and swam nearly 100 metres to the boat.

The shark bit Brett Highland’s arm (pictured) twice, and only let go when he stabbed it in the stomach

The experienced fisherman and diver had a bad feeling in the sea that morning.

‘[It was] really dark blue, sort of eerie. There was a lot of unusual fish in the water,’ he told 7NEWS.

Mr Highlands said when the shark bit him the first time he thought, ‘I’m in for the battle of my life here.’

‘It was just a wild animal attached to my arm. I didn’t have a lot of time to think, but I do remember thinking, “oh my god, this is it,”‘ he said.

‘It bit and then it bit again, almost like a dog trying to get a good grip of a bone.’

Mr Highlands ran his spear into the belly of the shark, and when it let go of his arm he sped towards the boat.

‘I just backstroked and I kept looking under the way to see if it was coming at me,’ he said. 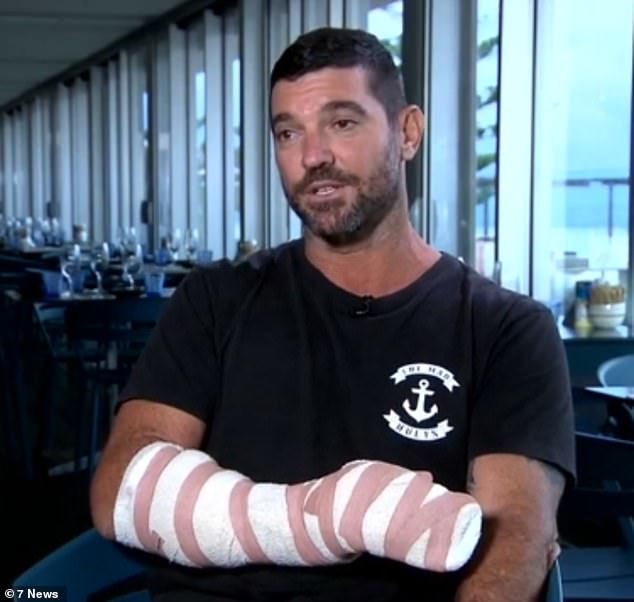 His friends used a diving belt as a tourniquet while making the half-hour trip to shore, where Mr Highlands was flown to Royal Perth Hospital for surgery.

His wetsuit is being analysed to identify the species, which is believed to be a tiger shark.

Mr Highland has vowed to go back in the water – but first, the builder is looking to hire.

‘If there’s anyone out there looking for some work, I need a right-hand man,’ he joked. 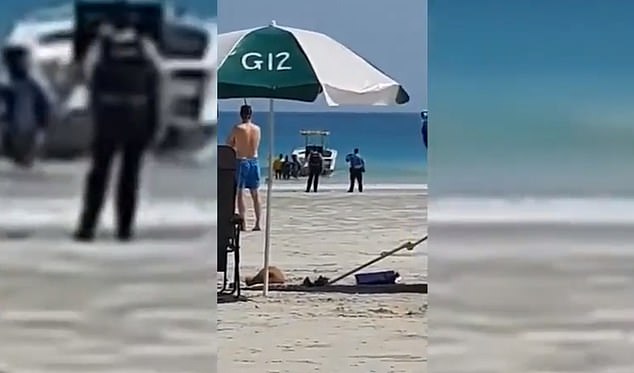 Pictured: The moment Mr Highlands was brought to shore after being attacked by the shark