A 13-year-old girl who was left completely bald from her alopecia has made an incredible transformation after taking an arthritis drug.

The unidentified teenager, from Brazil, had slowly been losing her hair for five years and standard medications failed to help. Doctors tried tofacitinib as a last-resort.

Tests of the drug, marketed as Xeljanz, have shown it can help alopecia patients regrow their hair – but it is not yet licensed as a conventional treatment.

After just four months, the girl regained a significant amount of her hair. She was left with thick, brown locks within two years of taking tofacitinib.

The results add to the evidence that the drug could offer hope for millions of patients around the world with alopecia, who have slim chances of making a full recovery.

Tofacitinib is routinely given to patient with rheumatoid arthritis, which is caused by inflammation. Dermatologists say the type of alopecia the girl had is caused by the same process. 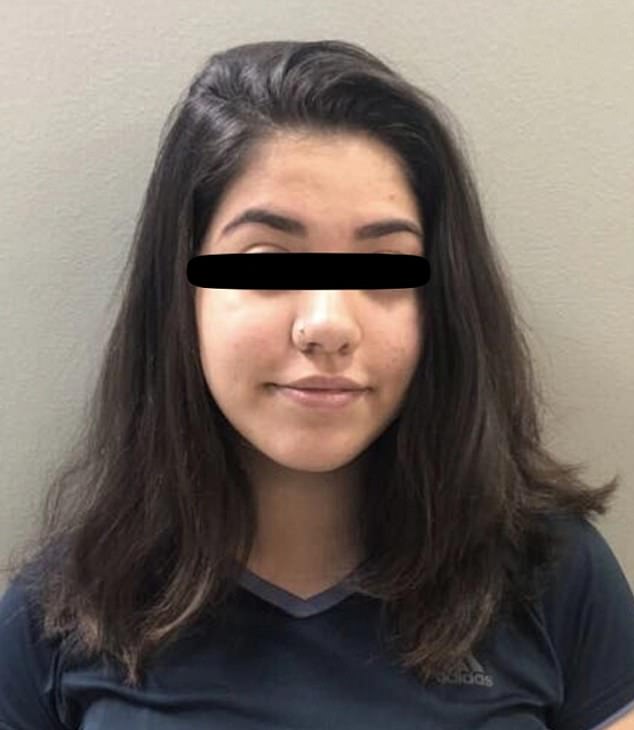 The patient had grown a significant amount of hair after four months, and within two years, had a full head of thick hair (pictured, after 19 months) 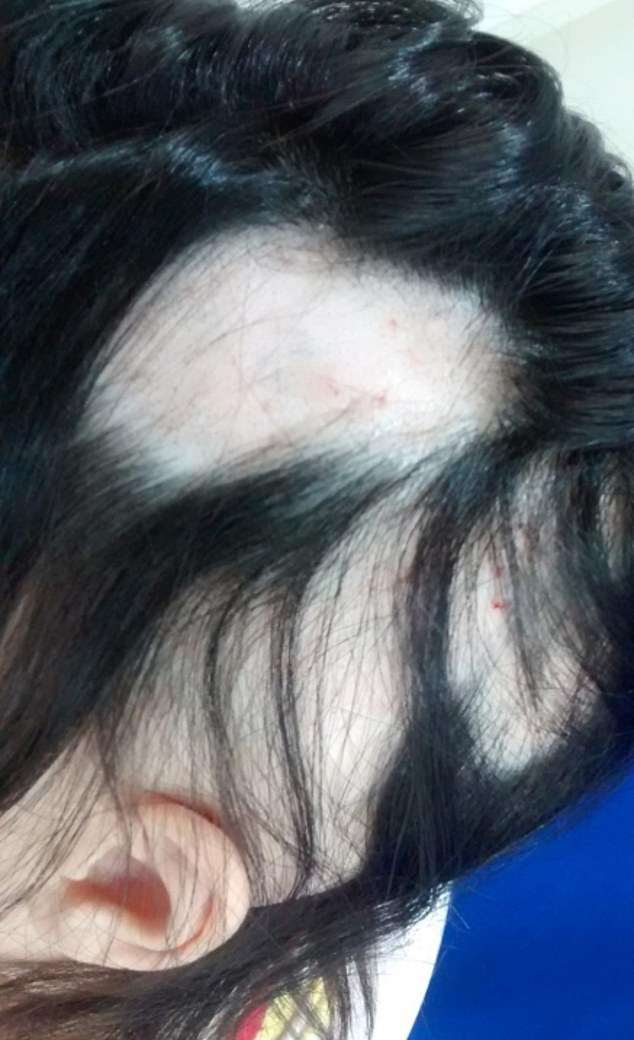 The unnamed teenager, who lives in Brazil, had been suffering from extreme hair loss for five years. Pictured, before going completely bald

Medical student Rachel Berbert Ferreira, at Centro Universitario Cesumar, was the senior author of the paper in Clinical Case Reports.

She explained how the 13-year-old girl began experiencing hair loss in small patches on her head at the age of eight.

Her condition is known as alopecia areata, a type which does not cause scarring and can occur at any age. A quarter of cases are in children.

The doctors had tried everything, from pills, injections and creams – some of which were painful on her skin.

Despite their best efforts over the years, either the girl had no response to treatment or faced side effects such as acne and weight gain.

By the time the girl was put onto tofacitinib, she had total hair loss on her head. She still had eyebrows and eyelashes.

The patient was monitored every four weeks while she took two pills a day, and the results were astounding.

Ms Ferreira said: ‘Significant hair growth was evident at the end of fourth month. No side effects were observed.’ 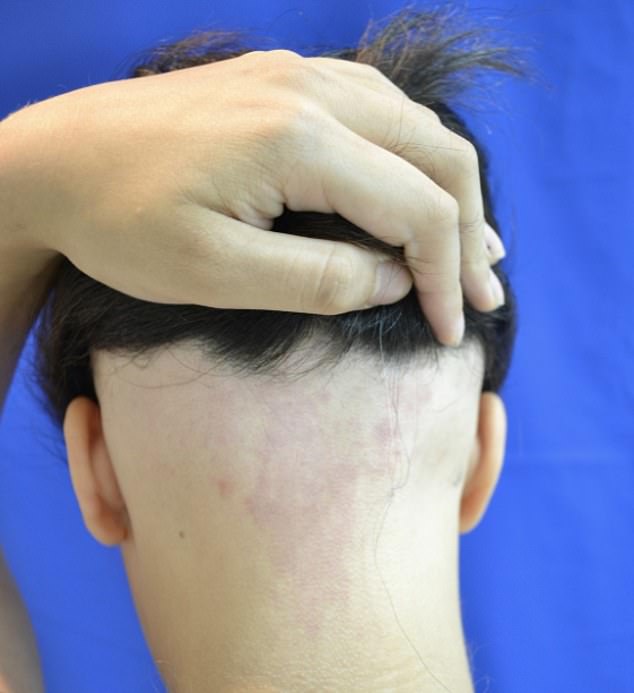 The doctors had tried everything, from pills, injections and creams. But nothing had worked. Pictured – before going bald, the patient had lost most of her hair at the back of the head 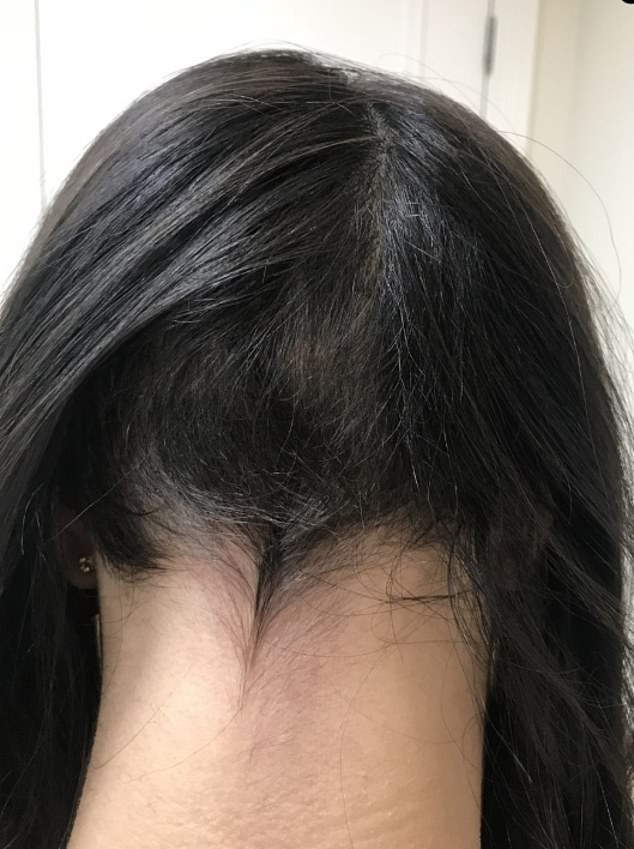 It took longer for the hair to grow back here, but it did start growing a year after treatment (pictured) 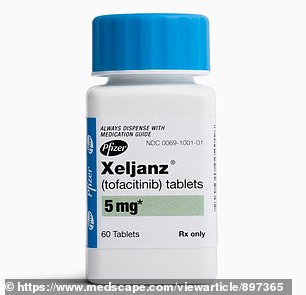 Tofacitinib, marketed as Xeljanz, is typically used for patients with rheumatoid arthritis

The hair took the longest amount of time to grow at the back of the head at the bottom, where the hair loss had first started.

But after a year, that patch of hair had started to grow again and was soon back to normal.

Ms Ferreira said: ‘After one year of therapy, she had total hair regrowth. Our patient is still under treatment with tofacitinib after 19 months of therapy.’

Depending on the extent of hair loss there is a good chance that, for four out of five people with alopecia areata, the hair will grow back within a year without any treatment, according to the British Skin Foundation.

However, those who have complete hair loss at any stage of alopecia areata have only a 10 per cent chance of full recovery.

Ms Ferreira wrote: ‘Alopecia areata is a common autoimmune disease, with a negative impact in health‐related quality of life, especially when affecting children and adolescents.

‘Current medical therapies, mainly for severe disease, are not effective. 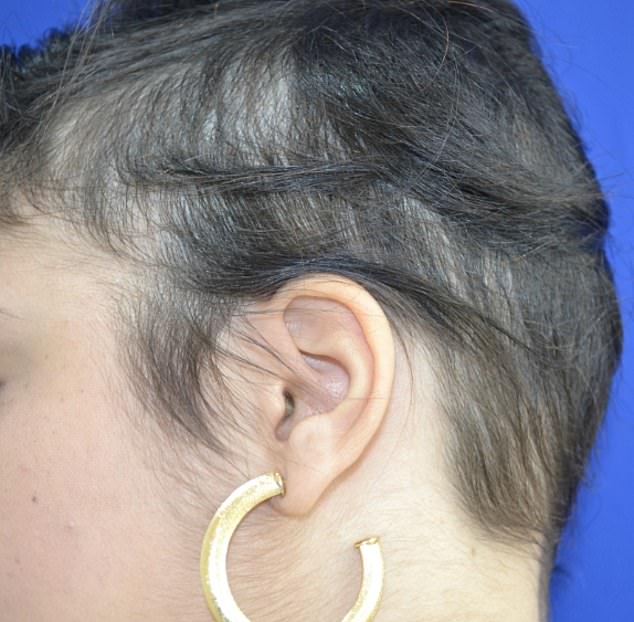 Seven months of treatment with the arthritis drug tofacitinib 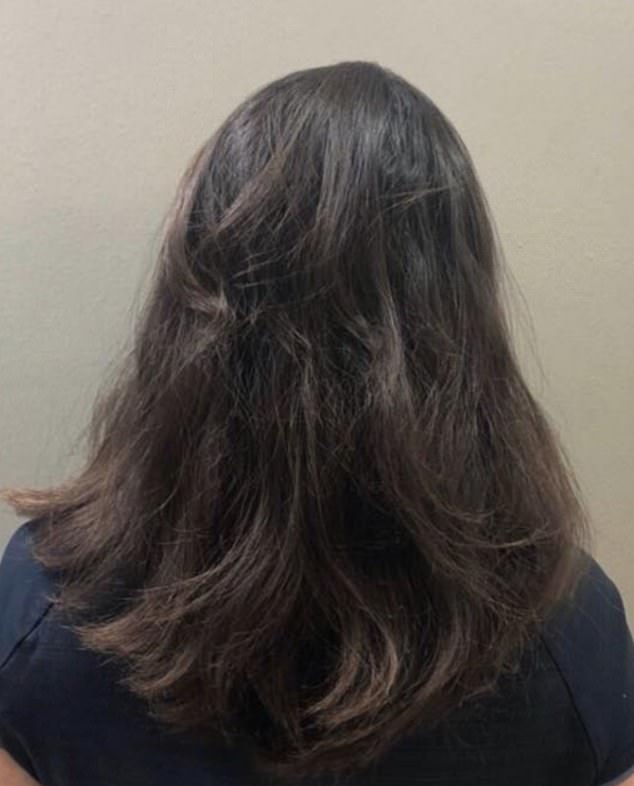 The girl is in a small minority of people who had her whole head of hair grow back after suffering with alopecia areata. Pictured, her hair after 19 months

‘JAK inhibitors are emerging as a promising therapy.’

JAK inhibitors, like tofacitinib, are a class of drugs which are most commonly used for the treatment of rheumatoid arthritis (RA).

People with RA have too many proteins in their body called cytokines, which play a role in inflammation.

JAK inhibitors stop the production of proteins involved in inflammation by blocking a messaging pathway. This calms down the immune system and helps ease RA.

There are some studies showing tofacitinib is effective for other conditions which are linked with inflammation – such as alopecia.

Inflammation can trigger hair loss, but the underlying cause of the inflammation is not clear.

One review of evidence by Yale University in 2016 showed 13 adolescents with various stages of alopecia achieved 70 per cent regrowth of hair after being treated with tofacitinib.

Ms Ferreira said: ‘Contrary to the series reported, our patient had complete hair growth on the scalp.

‘The case reported in this study is the youngest patient ever reported to be successfully treated with oral tofacitinib in Brazil for alopecia areata and its variants.’

The girl also had an underactive thyroid gland (hypothyroidism), of which one symptom is dry, thinning hair. She was also treated for this with hormonal tablets.

WHAT IS ALOPECIA AND HOW WAS IT TREATED WITH AN ARTHRITIS DRUG?

Alopecia is a general term for hair loss. Alopecia areata is a common cause of non-scarring hair loss that can occur at any age.

There is no cure but various treatments to try and stimulate hair regrowth. Regrowth of hair in typical alopecia areata is usual over a period of months or sometimes years, but cannot be guaranteed.

If more than half the hair is lost then the chances of a full recovery are not good.

Hair is lost because it is affected by inflammation. The cause of this inflammation is unknown.

It is believed the immune system may attack the growing hair.

Immunosuppressants, such as sulfasalazine, methotrexate, ciclosporin, and azathioprinem, are occasionally used to treat severe alopecia areata which have not responded to other treatments.

JAKs are enzymes that play a role in activating the body’s immune response, and tofacitinib blocks this process, which may stop the inflammatory process.

JAKs are used to treat the symptoms of rheumatoid arthritis, an auto-immune condition which is also caused by inflammation.