A pig who was saved from slaughter at the eleventh hour has becoming a world-renowned artist.

Pigcasso, as she is now known, was rescued with her sister Rosie from a South African slaughterhouse when she was just two months old.

Animal welfare campaigner Joanne Lefson took them to a farm in Franschhoek, near Cape Town, where the base for her rescue pet charity Sanctuary SA was still being built.

She noticed a young Pigcasso picking up workman’s paint brushes in her mouth and decided to give her a canvas.

Pigcasso (pictured) was rescued with her sister Rosie from a South African slaughterhouse when she was just two months old. Now at 21 months she is an artist in her own right 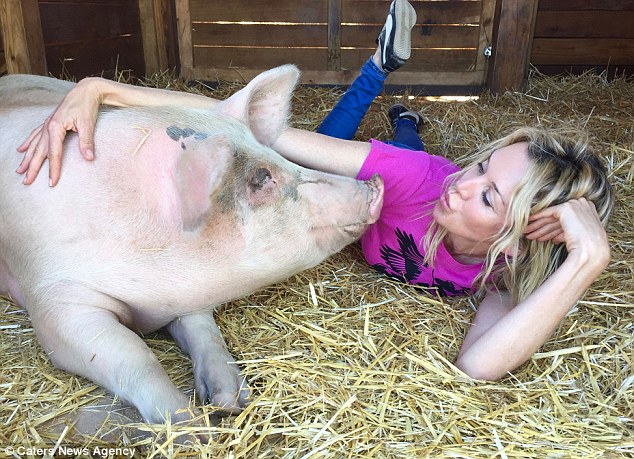 Now at just 21-months-old, she is believed to be the world’s only painting pig and has sold her artwork for as much as £1,700.

Despite selling 44 paintings across the UK, USA, South Korea and Malaysia, Ms Lefson says in many ways Pigcasso is just a regular pig.

She told The Times: ‘She’s not a diva and it hasn’t all gone to her head. She’s still very humble. All she wants to do is eat, sleep and paint.’

Pigcasso even launched her own exhibition – Oink – on Cape Town’s Victoria and Albert Waterfront last month.

It is due to open at a central London venue next month, before moving on to Paris, Berlin and Amsterdam.

Pigcasso has a ‘light-hearted take on current affairs’, according to Ms Lefson. 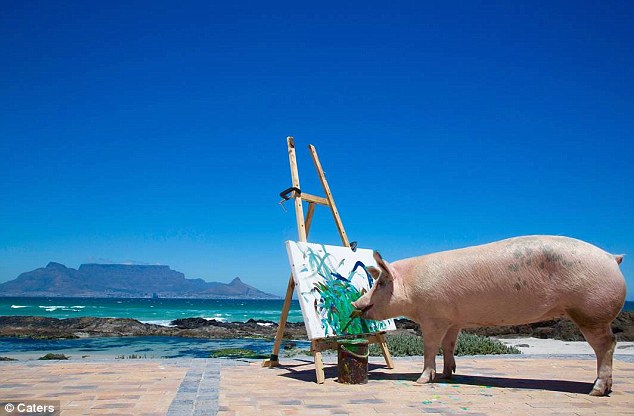 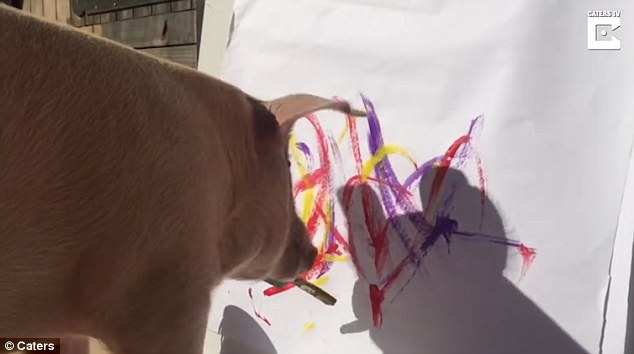 Despite selling 44 paintings across the UK, USA, South Korea and Malaysia, Ms Lefson says in many ways Pigcasso is just a regular pig

Her most expensive piece was called Brexit and featured a rough representation of the word in the colours of the British flag.

It sold to a Dutch collector for £1,730, after her debut piece was snapped up by a New York lawyer visiting her farm.

She signs each canvas by dipping her snout in a mixture of beetroot juice and acrylic paint.

As pigs have little concept of colour, Ms Lefson selects which paint to use before letting her creativity flow.

Ms Lefson added: ‘Paintbrushes were the only things she didn’t try to eat or destroy.

‘Perhaps it was the bristles, but she kept putting them in her mouth, so I set up a canvas and paints for her and it wasn’t long before she set to work.’

Her owner says she often takes inspiration from her surroundings and loves day trips to Cape Town’s iconic Table Mountain where she ‘loves getting sand between her trotters’ on the beaches below.