Astronomical! Mountain of rubbish dumped four years ago in an alleyway is so huge it can be seen from SPACE

A festering pile of rubbish dumped four years ago in a Dorset alleyway is now such an unsightly fixture that it can be seen from space.

The mountain of household debris, including nine fridge freezers, chairs and sofas, fills a 600sq ft space behind a dance studio in the Boscombe area of Bournemouth.

Local residents say they have made repeated complaints to the council to get the rubbish cleared to no avail – and the pile has now been picked up by Google Earth.

As well as the heavy duty white goods, there are beer cans, broken glass, doors, cupboards and paint tins.

The dumped pile takes up more square footage than some of the flats that surround it and residents are fed up with nothing being done to remove the unsightly mess.

One pensioner, who lives in the neighbouring road and uses the alley as a cut-through, said it looked like ‘a legal fly tip’ and said she had seen a rat there.

She said: ‘The pile has been there for more than four years to my knowledge. I contacted the council who told me it was private land and they can’t do anything about it.

‘I don’t think it could belong to any of the businesses round here because they wouldn’t go through all those fridges and freezers.’

She said few people had ever seen the rubbish appearing but it occasionally changed. ‘Sometimes it comes and goes but it never used to be as high as that. 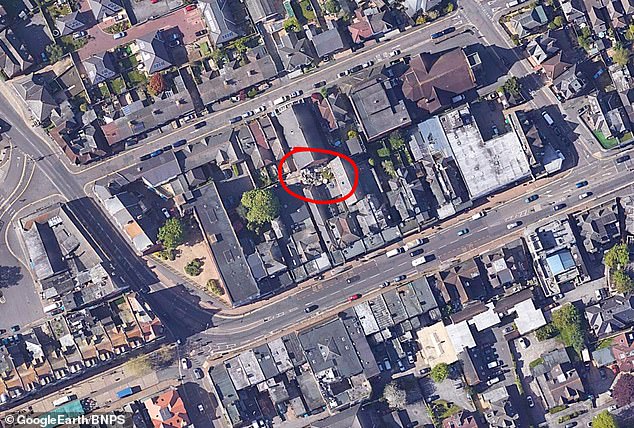 Another neighbour Katt Corkett said: ‘There’s always something new in it each day. I avoid taking the kids down there now to get the bus.

‘If it’s not junk being ditched, it’s human poo, smashed glass, syringes. We can see the top of this pile from our garden. It’s disgusting.’

A local business owner, who asked not to be named, branded the pile a fire hazard while another member of the public called on the council to step in.

They said: ‘Most of it looks to be recyclable and non-perishable waste, it wouldn’t take much effort or cost for the council to scoop this up and get it out of sight.’

Bournemouth Borough Council officials says they are aware of the rubbish but it is on private land and they are working with those responsible for the land to clear it.

However, officials offered no explanation as to why this has not happened in the last four years – and described it as a ‘complex ongoing case’. 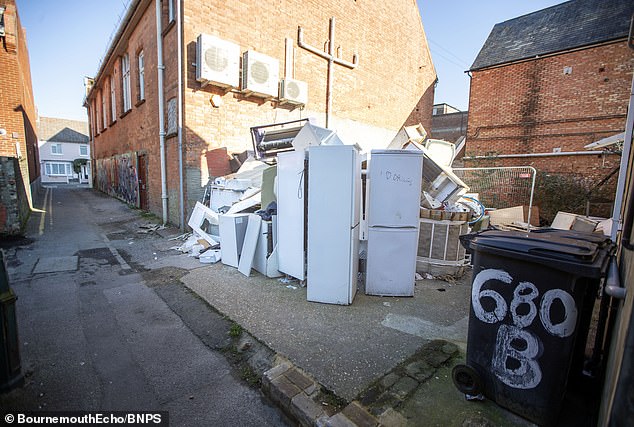 There are beer cans, broken glass, doors, cupboards and paint tins in the huge pile of rubbish

Sophie Ricketts, targeted enforcement manager at the council, said: ‘We have been engaging with multiple individuals with an interest in the site, which is subject to recently granted planning permission.

‘We continue to work with the responsible parties to include enforcement action, to ensure this land is cleared at the earliest opportunity.

‘We would encourage residents with any evidence of fly tipping to report this to us.’

Local councillor Jane Kelly said she would contact the environmental health department about the rubbish.

She said: ‘I can speak to them to enforce that the owners remove the rubbish, particularly if it’s becoming a health hazard. 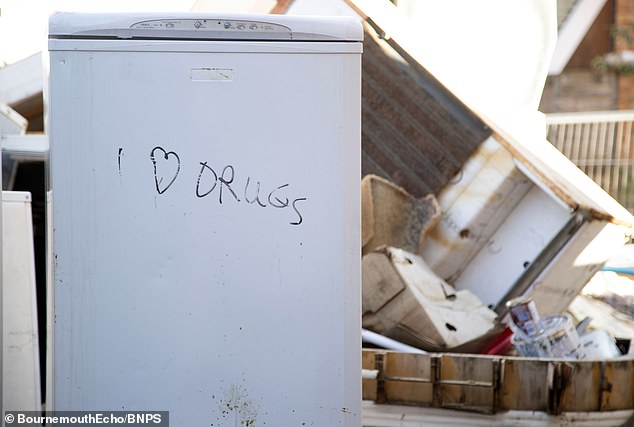 ‘It sounds horrendous. I totally agree that we must hold the people responsible to account for things like this.’

About 25 million tonnes of litter is dropped annually in Britain, costing taxpayers over £1billion.

The Daily Mail has highlighted the scourge of global plastic pollution with its Turn The Tide On Plastic campaign.

More than 120,000 volunteers have already signed up for this year’s Great British Spring Clean, a Keep Britain Tidy campaign in partnership with the Mail.

Yesterday, volunteers from more than 250 mosques took part in litter clean-ups as part of the campaign.