A pilot and his elderly passenger have both been killed after a light aircraft crashed in the Norfolk countryside.

Emergency services rushed to the scene near King’s Lynn, Norfolk, yesterday at around 11am but confirmed the male pilot, aged in his 50s, and the female passenger, aged in her 70s, had both died.

A pilot aged in his 50s and a female passenger aged in her 70s were killed in a plane crash near the village of Wolferton, pictured, in Norfolk with an investigation underway

According to reports, they were in a four-seater Piper Arrow, a single engine aircraft designed for flight training or personal flying.

Norfolk police say there were no other casualties and today the site is under guard pending an official investigation into the tragedy.

Residents in nearby Wolferton have spoken of their shock at the tragedy.

‘I think people in the village will be shocked. This is the last thing in the world they would’ve expected to happen.

‘It is a beautiful part of Norfolk and for something like this to happen is most unusual.’

The coastguard, fire service and ambulance service were initially scrambled to the crash site and experts from the Air Accidents Investigation Branch will be at the scene today trying to piece together how the tragedy happened. 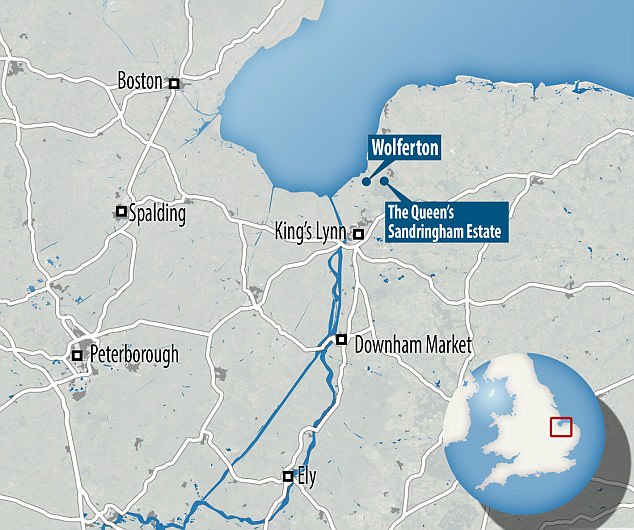 A statement on the AAIB website said: ‘The AAIB has sent a team to investigate a light aircraft accident that occurred north of Kings Lynn, Norfolk.’

Wolferton has a population of around 200 and is best known because for decades it was the railway stop for the Royals on their way to and from Sandringham.

The station was opened in 1862 after Queen Victoria bought Sandringham House as a Norfolk retreat – and was fitted with a set of elegant reception rooms, where the several generations of the royal family would wait to be taken to Sandringham.

The station closed in the 1960s and became almost derelict but it was renovated and converted to a house and three years ago it changed hands again for £700,000