Airline pilots have raised safety concerns after a critical fire-fighting system on Boeing’s £160million Dreamliner fleet was found to have the possibility of malfunctioning.

Boeing issued an alert, warning that the switch used to extinguish an engine fire and sever fuel supply and hydraulic fluid to stop flames from spreading on its B787 aircraft failed in a ‘small number’ of cases.

The Federal Aviation Administration (FAA) announced that the problem was ‘likely to exist or develop in other products of the same design’, warning that ‘the potential exists for an airline fire to be uncontrollable’.

But despite admitting a ‘risk to the flying public’, the FAA said it will not ground the fleet of more than 60 Dreamliners operated by UK airlines including Tui, Virgin Atlantic and British Airways, instead ordering them to check the switch every 30 days, the Observer reported.

Pictured: The first Boeing 787-8 Dreamliner with Rolls-Royce Trent 1000 engines in the production hangar

Air crew have claimed that passenger and crew safety is being compromised, with one pilot telling the newspaper: ‘If there was an engine fire on a transatlantic flight and the aircraft had one of the defective fire switches, then we would have to fly with a burning wing for up to three hours before we could safely land.’

Boeing warned that long-term heating could cause the fire switch to become stuck in the locked position, meaning it could not be used to release the two fire extinguishers in each of the aircraft’s engines.

British Airways, Virgin Atlantic and Tui each told the Observer they abided by safety requirements outlined by aviation authorities, and their aircraft had been checked, while Boeing said fewer than 1% of fire switches proved defective, adding that it supported airlines with inspections and replacement parts.

Earlier this year two Boeing 737 Max 8 jets crashed in Ethiopia and Indonesia, and the company previously admitted it ‘fell short’ after the 737 Max was grounded globally in March.

In an interview with CBS News Boeing boss Dennis Muilenburg said a mistake was made in the software for a cockpit warning light called an ‘angle-of-attack (AOA) disagree alert’, but added that Boeing was fixing the issue.

The optional safety features – an angle of attack indicator and a disagree light – are not mandated by the Federal Aviation Administration and are currently only installed if the airline pays for the add-ons.

Lion Air Flight 610 and Ethiopian Airlines Flight 302 were not equipped with the safety features, officials told the New York Times.

Earlier this month Boeing was hit by safety requiring million of dollars worth of repairs, and the FAA announced a new problem with the company’s 300 grounded 737 MAX jets.

The air giant was handed new Airworthiness Directives by regulators who identified safety flaws in Boeing’s 787 jets. According to the FAA the tires/wheels of the recently launched 787-9 and 787-8 ‘could be susceptible to damage, which could result in a loss of braking on one main landing gear truck, loss of nose wheel steering and loss of directional control on the ground when below rudder effectiveness speed.’

The regulators’ directive was effective from Thursday, June 6. 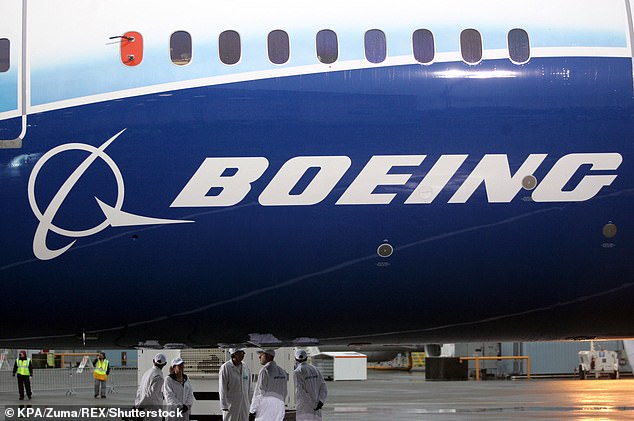 The 787 Dreamliner is flown by 72 major airlines around the world, including United, Virgin Atlantic and American – and Boeing recently announced 235 new routes.

The $200m (£160m) Dreamliner fleet, which launched in 2011, was grounded in 2013 after a series of fires due to leaking batteries, and in 2017 the FAA told Boeing to improve quality control when metal shavings were discovered among electrical wiring.

Boeing describe the ‘industry-leading technology’ of the 787 Dreamliner as ‘creating remarkable opportunities for airlines around the world and dramatically improving the air travel experience’.

The company say the aircraft’s ‘unparalleled fuel efficiency and range flexibility enables carriers to profitably open new routes as well as optimize fleet and network performance’, offering passengers ‘an experience like none other in the air, with more comfort and less fatigue’.

Boeing has reportedly increased Dreamliner production from 12 to 14 a month, announcing that it would replace as many as 900 quality control inspectors with smart technology.

But the company has drawn criticism, with one anonymous pilot saying: ‘Boeing insists that the risk of an engine fire is very low, and that’s true, but it’s Boeing’s attitude to the risk that has upset us, especially in light of recent B737 Max issues.

‘If the fire switch malfunctions, there’s no manual override to deploy the engine fire extinguishers and therefore no way of putting out a fire, but Boeing says that it’s fine, and the airlines agree. Such is the fear of Boeing’s power that no one dares speak out.’