Pink defended her children running around the Holocaust Memorial in Berlin on Sunday in a social media post.

The 39-year-old singer shared a photo on Instagram of daughter Willow, eight, and two-year-old son Jameson playing among columns at the memorial for Jewish victims of the Holocaust.

Pink staved off criticism in the caption after recently hitting out at the ‘parenting police’.

No judgment: Pink posted a photo of her children Willow and Jameson running around the Holocaust Memorial in Berlin on Sunday on Instagram and staved off criticism in the caption

‘For all of the comments; these two children are in actuality Jewish, as am I and the entirety of my mothers family. The very person who constructed this believed in children being children, and to me this is a celebration of life after death. Please keep your hatred and judgment to yourselves,’ she wrote in the caption for her roughly 6.4 million followers.

The singer’s husband Carey Hart, 43, also posted a photo of Pink and their children at the Memorial To The Murdered Jews Of Europe.

Carey wrote in the caption: ‘Berlin is one of my favorite European cities. The history that this city has is always intriguing to me. Last time I was here I traveled the city on my bike and saw where the wall was, and the land marks along with it.’ 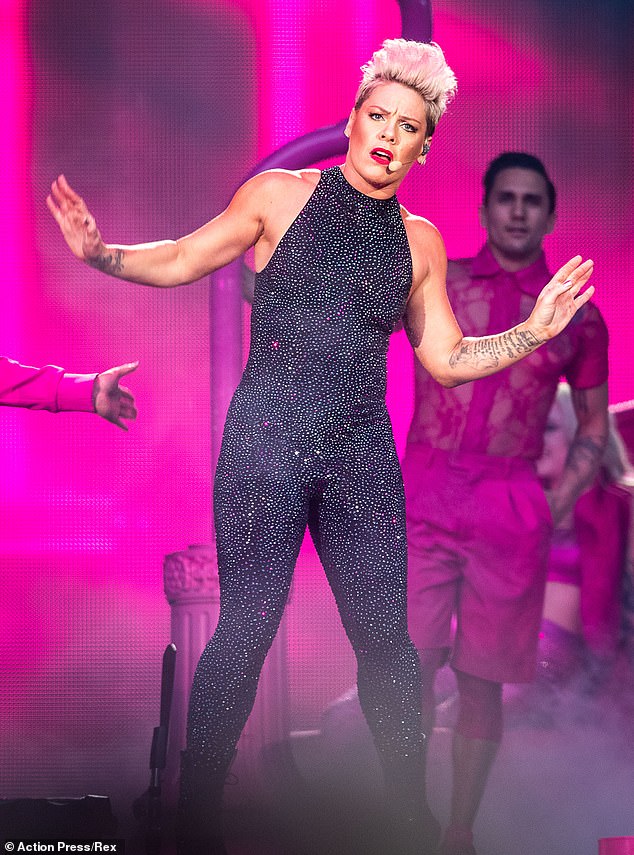 On tour: The 39-year-old singer, shown performing in Berlin on Sunday, has been on her Beautiful Trauma Tour

He added: ‘The holocaust memorial is a somber reminder of what happened. My wife is half Jewish (my mother in law 100%) and my children are 1/4. So scary to think what could have happened to them those years ago’.

The Please Don’t Leave Me singer last week fired back at the ‘parenting police’ on Instagram.

She posted a photo of Willow having fun with sprinklers and accompanied the shot with a sassy caption lashing out haters. 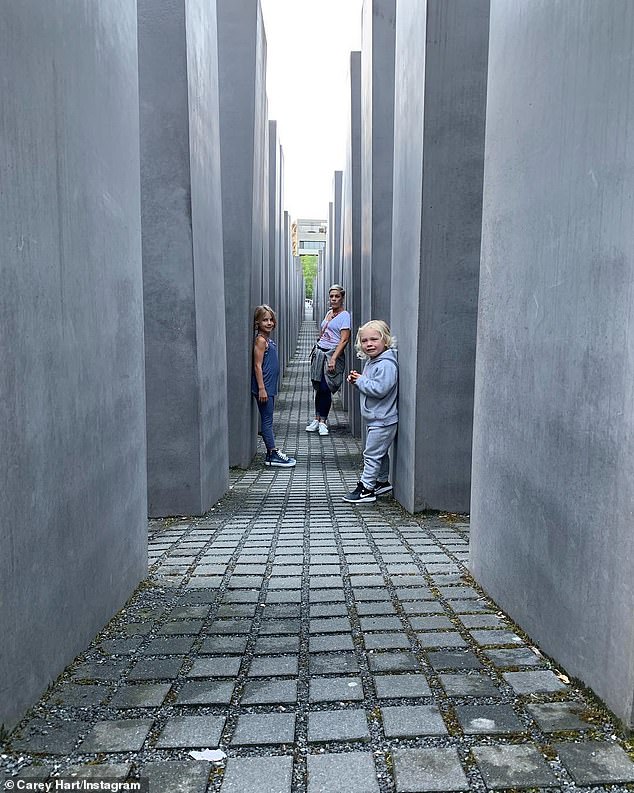 Somber reminder: Carey Hart also posted a photo of Pink and their children Jameson and Willow at the Holocaust Memorial and noted that his wife is half Jewish

While branding her critics ‘a**holes’, she went on: ‘Here’s a picture of my child running through water. It wasn’t even filtered. What a waste of water’.

Pushing the point, she went on: ‘And no helmet? I hope she had sunscreen. If she slips and falls she may be traumatized for life. And her mother wasn’t even there. I was….. gasp…. working!!!! In another country!’. 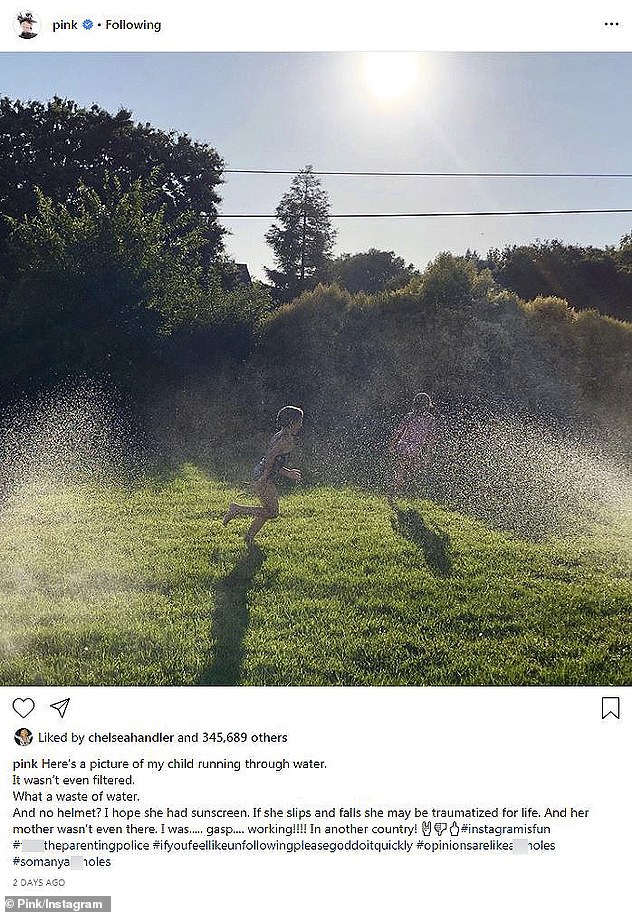 Parenting police: Pink made fun of the ‘parenting police’ on Instagram last week with a post of her daughter Willow having some summer fun

The What About Us singer in April while on The Ellen DeGeneres Show said she would stop posting photos of her children,

Pink was slammed for posting a photo of Jameson without a diaper as he and Willow fed a pelican at the beach.

She said: ‘I cried so hard after that because I like to share my family. I’m prouder of my kids than anything I’ve ever done and I won’t share them anymore. I won’t do it’. 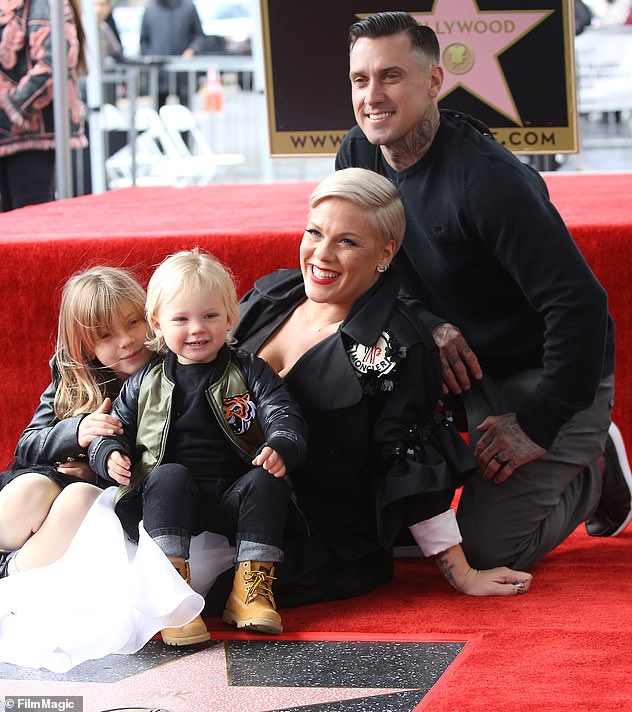 Family portrait: The What About Us singer is shown with husband Carey Hart, daughter Willow and son Jameson in February in Los Angeles as she was honored with a star on the Hollywood Walk of Fame

Pink appeared to change her mind and posted a photo July 8 of a family trip to the Hamburg Zoo.

An Instagram user questioned the outing in the comments section.

‘I’m surprised you go to zoos. Animals shouldn’t be in captivity. If it was a sanctuary, that’d be different,’ the comment said. 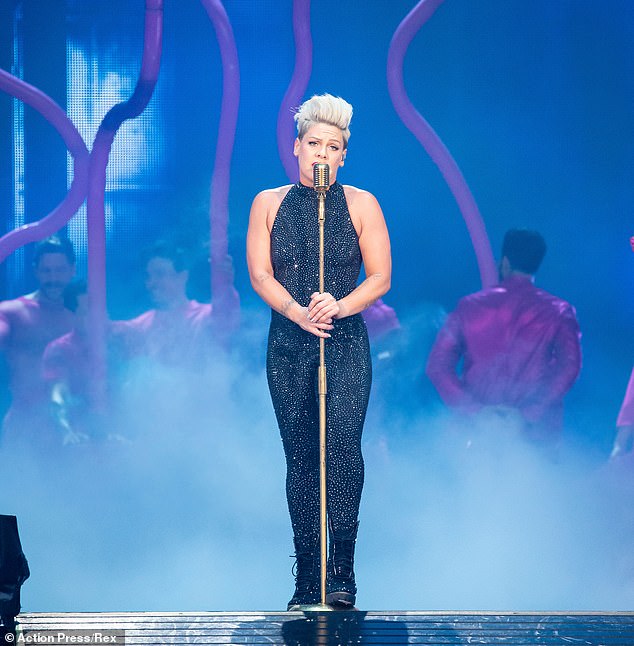 On tour: Pink, shown in Hamburg, Germany, earlier this month, fired back at the ‘parenting police’ after getting grief for taking her children to the Hamburg Zoo

The comment did not go unnoticed by the Pink, as she penned: ‘I believe in capturing a child’s interest and love for an animal before teaching them about things like captivity. But thank you, the world needed your wisdom today…

‘Here’s the thing though…I don’t remember asking you for your opinion or for your help in raising my child. This isn’t the place for a debate. Call CNN or call the zoo’.

Pink, real name Alecia Beth Moore, has been on her Beautiful Trauma Tour and performed Sunday in Berlin. 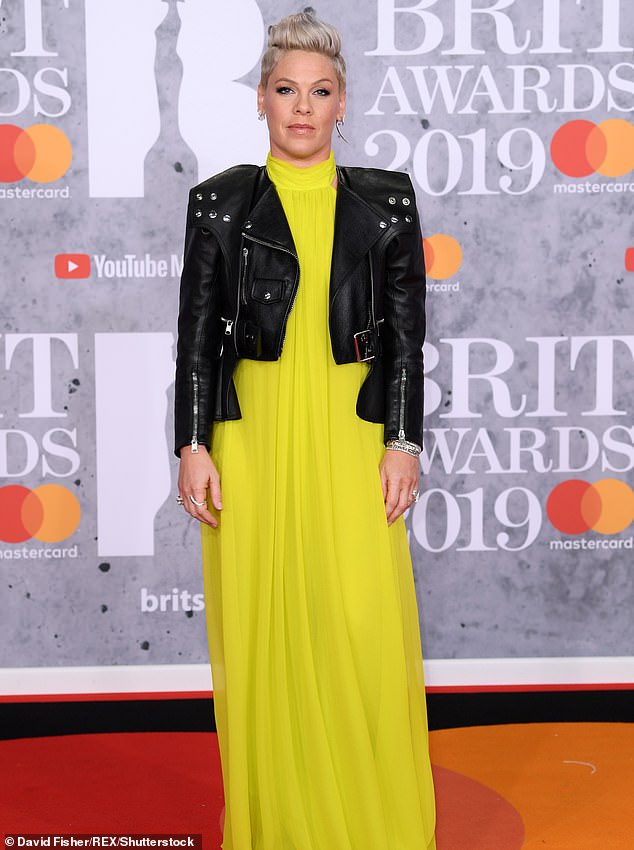 International star: The Please Don’t Leave Me singer, shown in February in London, completed the US leg of her Beautiful Trauma World Tour in Madison Square Garden, New York on May 21 and has since travelled to the U.K and France