The Pittsburgh Steelers and Cleveland Browns observed a moment of silence at Pittsburgh’s Heinz Field for the 11 people killed by a gunman inside a synagogue in the city Saturday; and after pulling out a 33-18 win, quarterback Ben Roethlisberger paid tribute to tribute to a former team staffer affected by the tragedy.

‘I’d like to start with saying our thoughts, love, and prayers go to all of the victims of yesterday’s senseless shooting in Squirrel Hill especially from me and family to Michele [Rosenthal],’ Roethlisberger said of the team’s former community relations manager, whose brothers Cecil Rosenthal and David Rosenthal were among those killed Saturday. ‘We love you Michele and we are thinking about you.’

Roethlisberger was also asked about preparing for Sunday’s game after the tragedy. 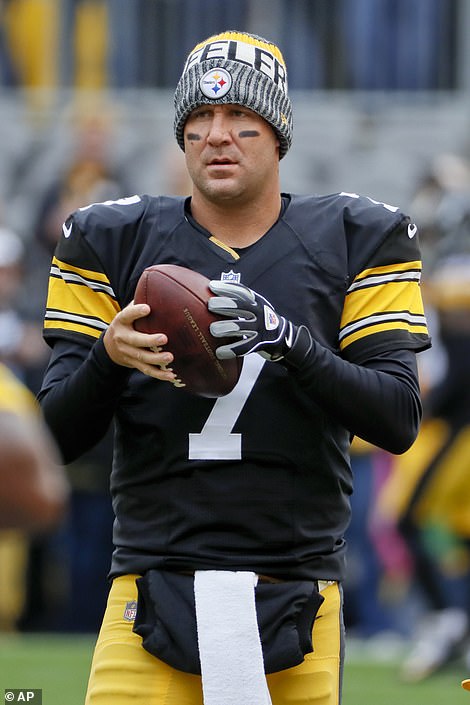 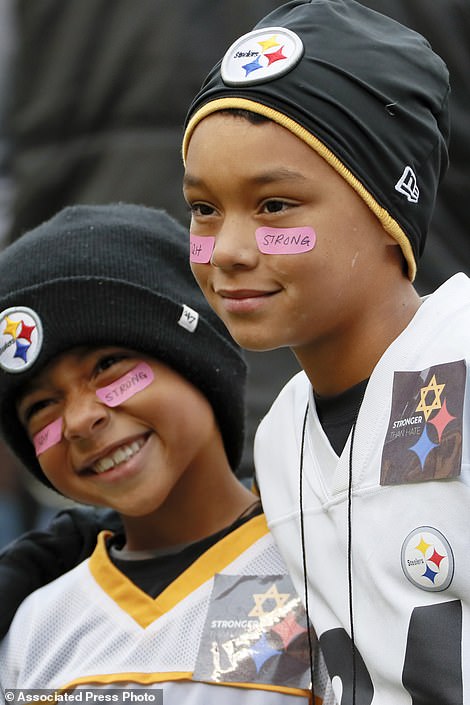 (Left) Steelers quarterback Ben Roethlisberger said he was thinking about the team’s former community relations manager, Michele Rosenthal, who lost two brothers in the shooting. (Right) Six-year-old Isaiah Mosley, left, and Thaddeus Mosley, 9, wear Steelers jerseys with a patch of the Steelers logo with one of the hypocycloids changed to a Star of David as they watch the team warm up before an NFL football game against the Cleveland Browns on Sunday 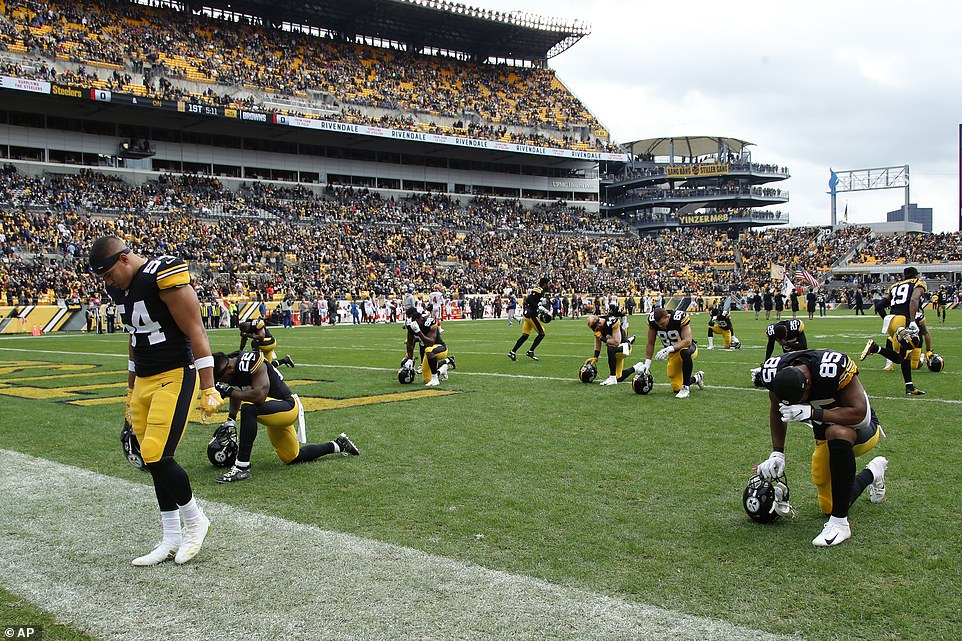 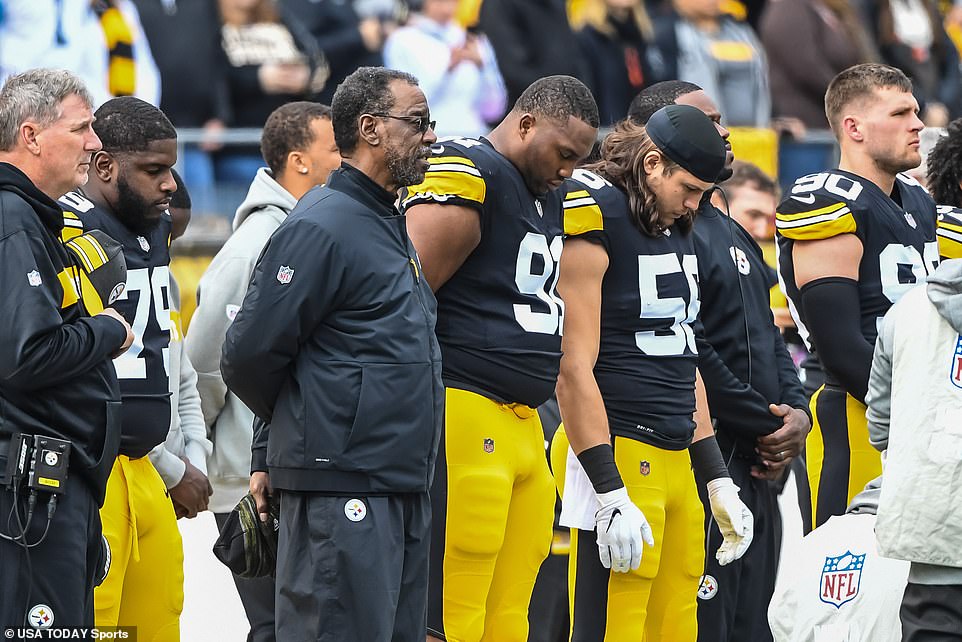 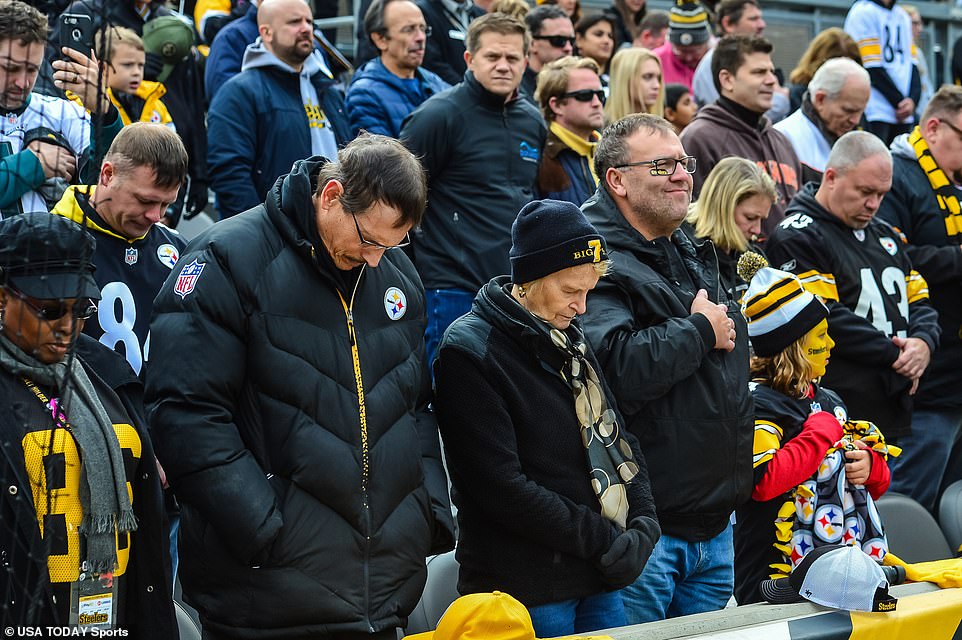 ‘It was crazy tough and especially of Michele and the closeness that we have with her,’ Roethlisberger said. ‘It’s hard, coach [Mike Tomlin] always talked about when you step inside the white lines everything else has to kind of go away but sometimes its’ [easier] said than done.

‘I told the guys during the post team prayer, I said we’re thankful for a victory, but we also understand there are bigger things, there is life,’ he continued.

‘I am glad we can give people maybe three hours of a brake of not thinking about it all the time. That is what sports dose sometimes, it helps you to heal. It’s over, people are going to enjoy this, but reality still sets in for a lot of people.’ 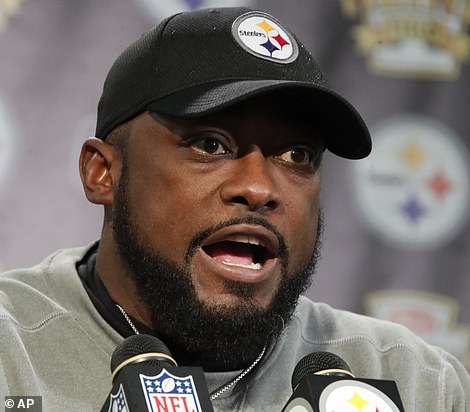 A design based on the Pittsburgh Steelers’ helmet logo – inserting a Star of David – appeared on the internet and was displayed at Heinz Field.

In a statement issued before his team’s game, Steelers owner Art Rooney II said: ‘Our hearts are heavy, but we must stand against anti-Semitism and hate crimes of any nature and come together to preserve our values and our community.’

‘I am a member of the Squirrel Hill community, personally, and words cannot express how we feel as members of this community,’ Tomlin said. ‘We are prayerful. I appreciate the efforts of the guys today.

Fans at Heinz Field displayed a number of signs marking the shooting.

‘Hatred can’t weaken a city of steel,’ read one, while others featured the Star of David and the Hebrew salutation, ‘Shalom,’ which means ‘peace.’

There were other such tributes at NFL games elsewhere Sunday.

Roethlisberger and Antonio Brown paired up for two scores in Pittsburgh’s 33-18 victory over Cleveland, which has lost 25 road games in a row – one shy of the NFL record.

A Pittsburgh Steelers logo with one of the hypocycloids changed to a Star of David is on a banner at Heinz Field on Sunday. The Steelers added the logo in respect for the victims of a deadly shooting in a Pittsburgh synagogue on Saturday

Cecil and David Rosenthal went through life together with help from a disability-services organization. And an important part of the brothers’ lives was the Tree of Life synagogue, where they never missed a Saturday’s services, people who knew them say. 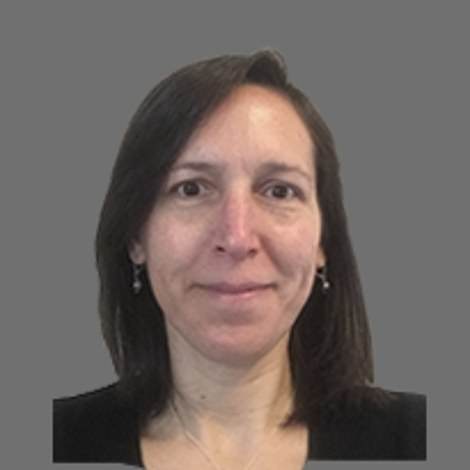 Michele Rosenthal, a former Steelers staffer, lost brothers Cecil and David during the shooting on Saturday

‘If they were here, they would tell you that is where they were supposed to be,’ Chris Schopf, a vice president of the organization ACHIEVA, said in a statement.

Achieva provides help with daily living, employment and other needs, and the organization had worked for years with Cecil, 59, and David, 54, who were among the 11 killed in Saturday’s deadly shooting. They lived semi-independently, and Cecil was a person who was up for all sorts of activities: a concert, lunch at Eat ‘n Park – a regional restaurant chain known for its smiley-face cookies – even a trip to the Duquesne University dining hall, recalls David DeFelice, a Duquesne senior who was paired with him in a buddies program.

‘He was a very gregarious person – loved being social, loved people. … You could put him any situation, and he’d make it work,’ chatting about the weather or asking students about their parents and talking about his own, says DeFelice.

And when DeFelice recognized Hebrew letters on Cecil’s calendar, the elder man was delighted to learn that his buddy was also Jewish and soon invited him to Tree of Life. DeFelice joined him on a couple of occasions and could see that Cecil cherished his faith and the sense of community he found at temple. 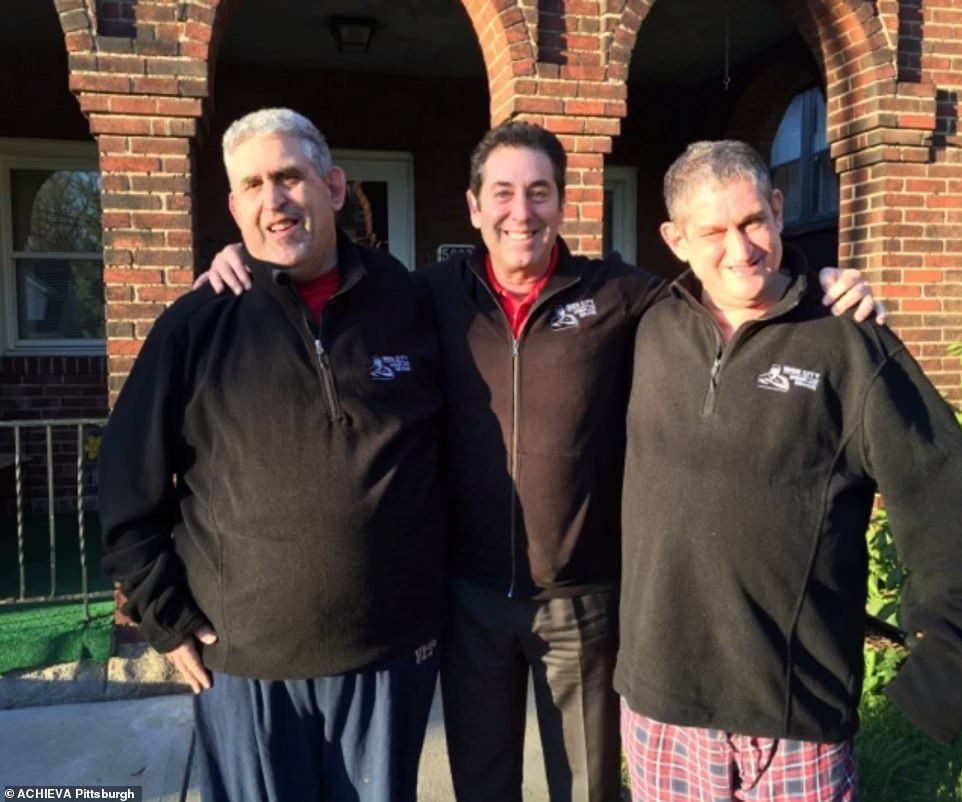 Cecil (left) and David Rosenthal (right) went through life together with help from a disability-services organization. And an important part of the brothers’ lives was the Tree of Life synagogue, where they never missed a Saturday’s services. ‘If they were here, they would tell you that is where they were supposed to be,’ Chris Schopf, a vice president of the organization ACHIEVA, said. They were the brothers of former Steelers community relations manager Michele Rosenthal

Emeritus Rabbi Alvin Berkun saw that, too, in Cecil, who according to his obituary was known as ‘the honorary mayor of Squirrel Hill,’ and David, who worked at Goodwill Industries.

‘They really found a home at the synagogue, and people reciprocated,’ he said.

Cecil carried a photo in his wallet of David, whom Schopf remembers as a man with ‘such a gentle spirit.’

‘Together, they looked out for each other,’ she said. ‘Most of all, they were kind, good people with a strong faith and respect for everyone around.’

The two left an impression on state Rep. David Frankel, who sometimes attends services at Tree of Life and whose chief of staff is the Rosenthals’ sister.

‘They were very sweet, gentle, caring men,’ Frankel said. ‘… I know that this community will really mourn their loss because they were such special people.’ 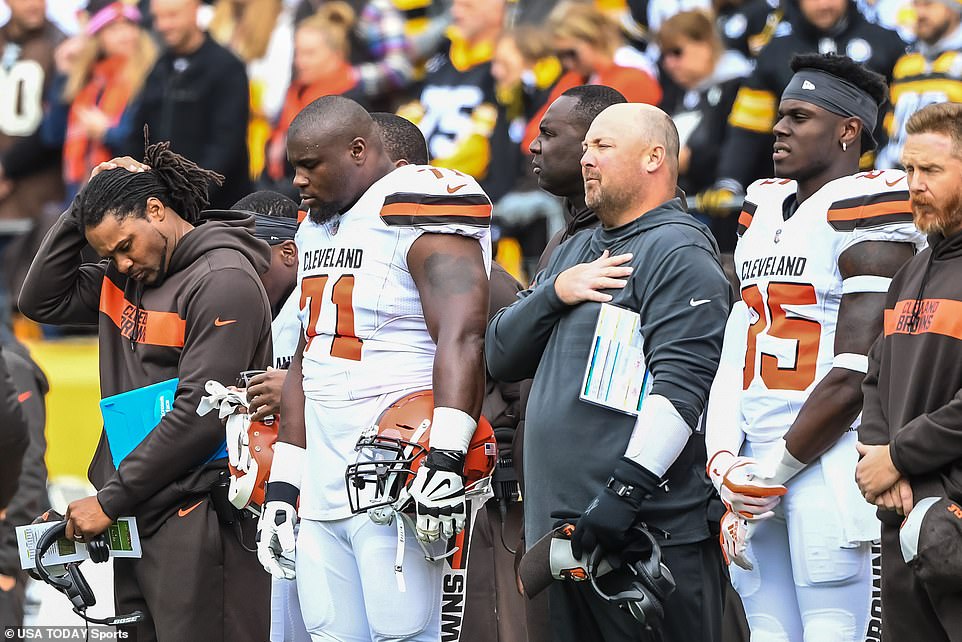 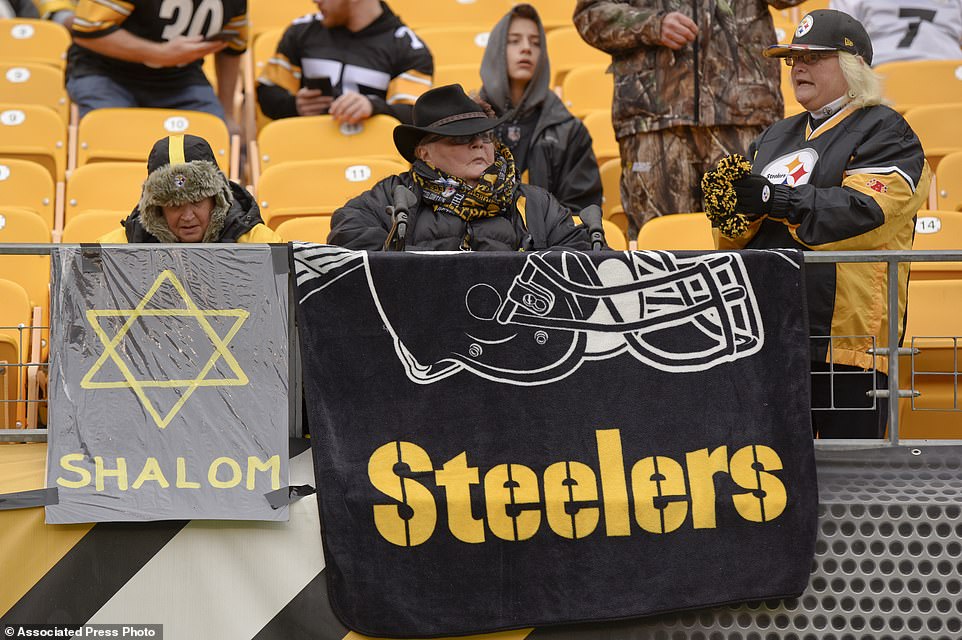 Pittsburgh Steelers fans sit behind a banner with a Star of David beside their Steelers blanket as they watch the teams warm up before an NFL football game between the Steelers and the Cleveland Browns, Sunday, Oct. 28, 2018, in Pittsburgh. There was a deadly shooting in a Pittsburgh synagogue on Saturday. (AP Photo/Don Wright)