Placebo postpone another gig as singer Brian Molko, 49, admits he could permanently lose his voice

Rock band Placebo have apologised to fans after being forced to postpone yet another show on their European tour at O2 City Hall in Newcastle.

Taking to Instagram on Thursday, singer Brian Molko, 49, admitted he is ‘no spring chicken’ and is ‘quite unwell’, adding that he ‘runs the risk of damaging’ his voice ‘permanently’ if he continues to ‘ignore advice’ from doctors.

He and guitarist and bassist Stefan Olsdal, 48, apologised for being ‘repeat offenders’ – four months after calling off a date in Greece due to an illness as well as numerous others due to a COVID outbreak.

‘I’m no spring chicken and am quite unwell!’ Placebo have been forced to postpone another gig with singer Brian Molko, 49, (left) admitting he’s running the risk of permanently losing his voice

He wrote in full: ‘Dear Placebo fans, As the ‘repeat offenders’ from the British tour, or ‘my support group’ as I like to call them now already know, I have been gradually losing my voice this past week since our second concert at O2 Academy Brixton.

‘I have kept on keeping on, despite my doctor’s advice to go home & shut up for a week, as it was important to me not to disappoint any of you who have paid good money and travelled, often from afar, to see us play.

‘I am now in a position however, that if I continue to ignore my doctor’s advice, I will begin to run the risk of damaging my voice, perhaps permanently. And that is a risk I am unfortunately not prepared to take.

‘So it is with a very heavy heart that I must announce that I will be unable to perform the Newcastle show tomorrow night. It pains me to write these words. We’ve had such a wonderful tour so far, with fantastic audiences & so much love in the room. 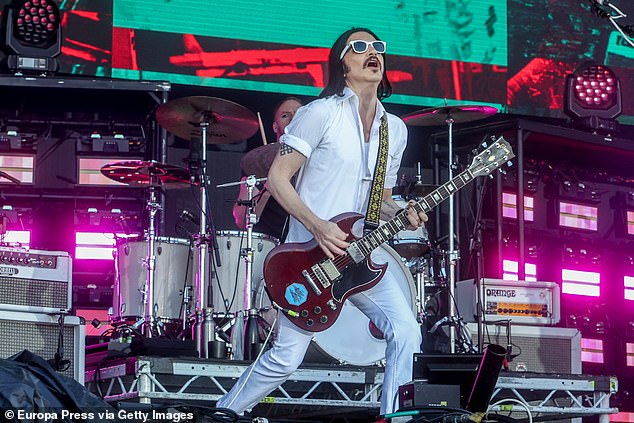 Fantastic: Brian pictured during the first day of the Mad Cool 2022 festival in Valdebebas, on July 6, 2022, in Madrid, Spain

‘But I am afraid that now I must protect my art and my livelihood. Myself & the band are crestfallen, as I’m sure you all are too, but I am no spring chicken anymore & I am quite unwell.

‘I’d like to thank you all in advance for your understanding and express my gratitude for gifting us such exciting concerts each night.

‘Fans are advised to hold onto their tickets and await further news. We are hoping to continue the tour in Glasgow on Saturday and will keep you updated of any further changes.’ 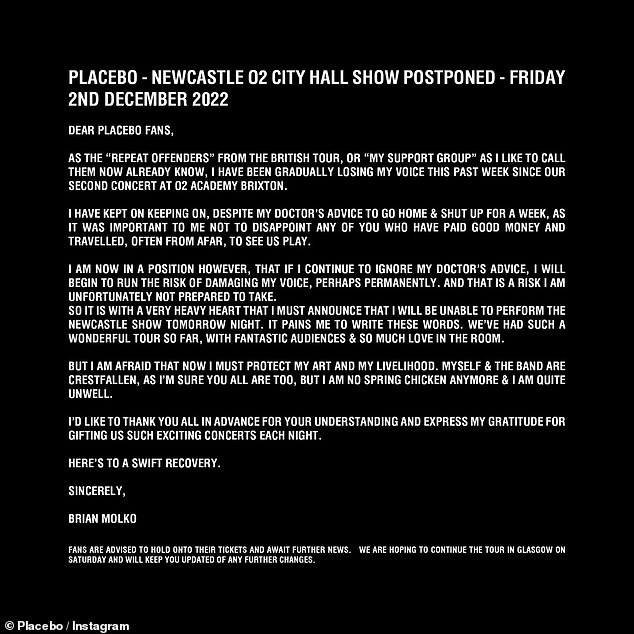 Regretful: He and guitarist and bassist Stefan Olsdal, 48, apologised for being ‘repeat offenders’ – four months after calling off a date in Greece due to an illness as well as numerous others due to a COVID outbreak

Back in July, the two-piece apologised to fans once again after being forced to cancel another show on their European tour, two hours before taking to the stage in Thessaloniki, Greece.

Taking to their social media.  they penned: ‘It is with great regret and sadness that due to illness within the band and subsequent doctors advice, we have to cancel our show at the Moni Lazariston in Thessaloniki this evening’.

The band who were due to perform at the 3,000 seat venue continued: ‘We sincerely apologise for the disappointment this will cause, it pains us greatly to let you down, especially at such short notice’.

‘By having a day’s rest and recuperation, it will allow us to go ahead with tomorrow’s show in Athens. You can get your tickets refunded for tonight at your point of purchase’. 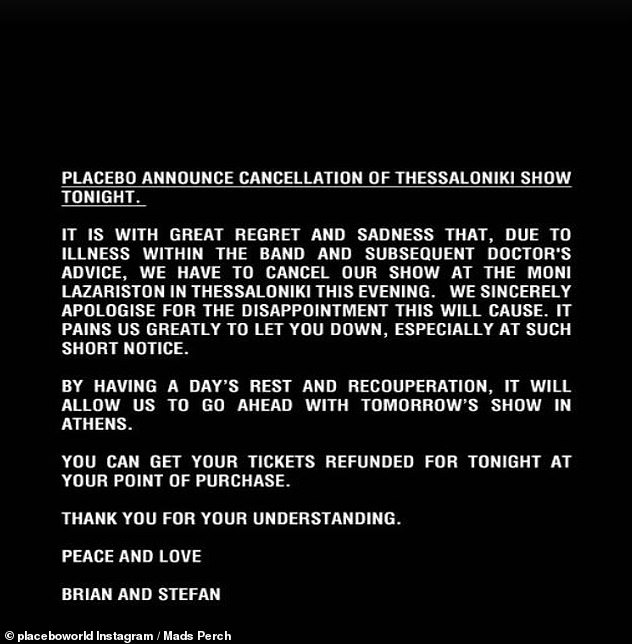 Statement: Back in July, the two-piece apologised to fans once again after being forced to cancel another show on their European tour, two hours before taking to the stage in Thessaloniki, Greece

Before signing off: ‘Thanks for understanding, peace and love, Brian and Stefan’.

Fans rushed to the comment section concerned about the rockers with one writing: ‘Take good care of yourselves, your health is the most important thing’.

While a second added: ‘Take care of you, we’re praying for you’ and  third wrote: ‘Get well soon x’.

However some fans were disappointed that the band would be performing the following evening with one commenting: ‘ Well, I don’t get it how come you cancel todays shows due to illness and tomorrow it will be fine to play in Athens. 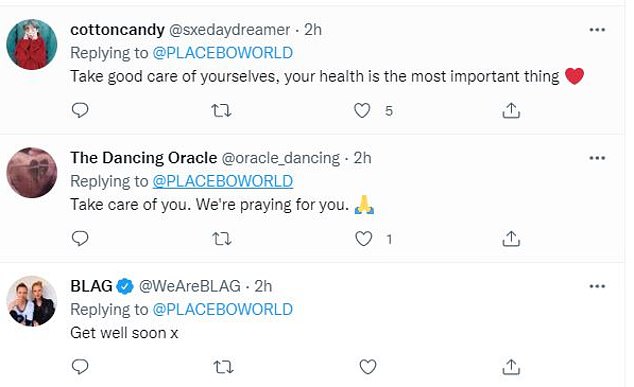 Get well soon: Fans rushed to the comment section concerned about the rockers with one writing: ‘Take good care of yourselves, your health is the most important thing’

Disappointed: However some fans were disappointed that the band would be performing the following evening with one commenting: ‘ Well, I don’t get it how come you cancel todays shows due to illness and tomorrow it will be fine to play in Athens

‘Sorry for the person who is ill but completely unprofessional and unethical to cancel the show two hours before. I don’t think Thessaloniki will want you here again’.

It comes after the band cancelled shows earlier this month writing: ‘Due to an outbreak of Covid within the Placebo band and crew we regretfully announce that Placebo will be unable to perform at Bucharest, Romexpo in Romania on Wednesday 13th July and at Skopke calling in Macedonia on Saturday 16th July.

‘We are frustrated and disappointed to not be able to perform these shows which are important to us  – as we know they are to you.

‘We apologise sincerely for the inconvenience and disappointment. 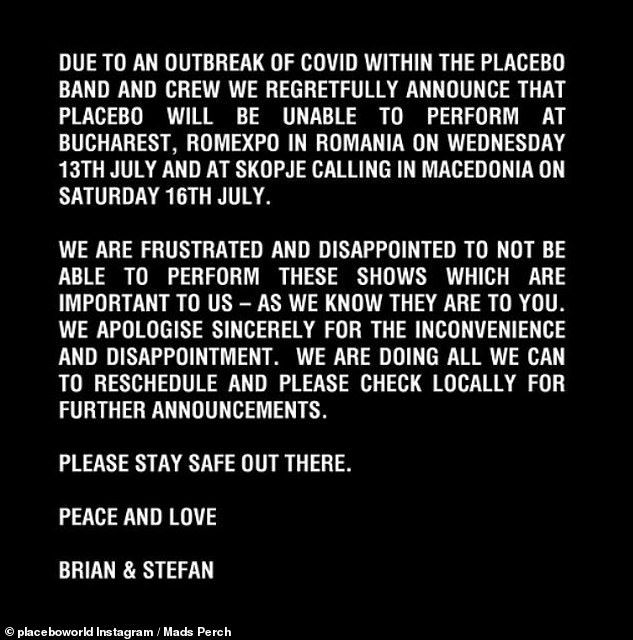 Frustration: They shared another post earlier this month following a COVID outbreak in the band 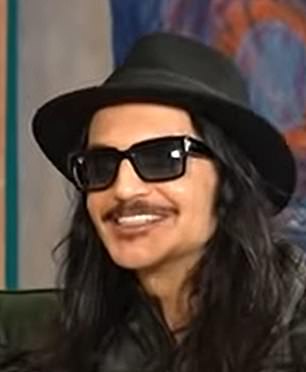 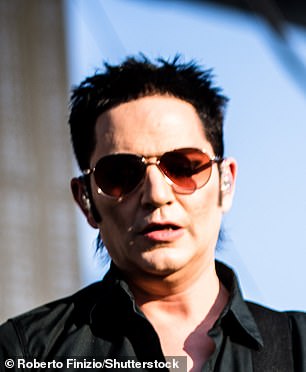 Wow! Brian has been looking drastically different as he unveiled his revamped rock star image ahead of the Placebo world tour

‘We are doing all we can to reschedule and please check locally for further announcements. Please stay safe out there. Peace and love, Brian and Stefan.’

Placebo’s eighth studio album Never Let Me Go has won rave reviews since its release in April this year and was released nine years after their latest outing.

Stefan told Guitar World that their latest musical offering took on a different form during the creative writing process.

He said: [Brian] came to me with the photograph that is now on the cover, and basically said, ‘Let’s take things, turn them on their head, and work backwards. Let’s start with the photo.’ 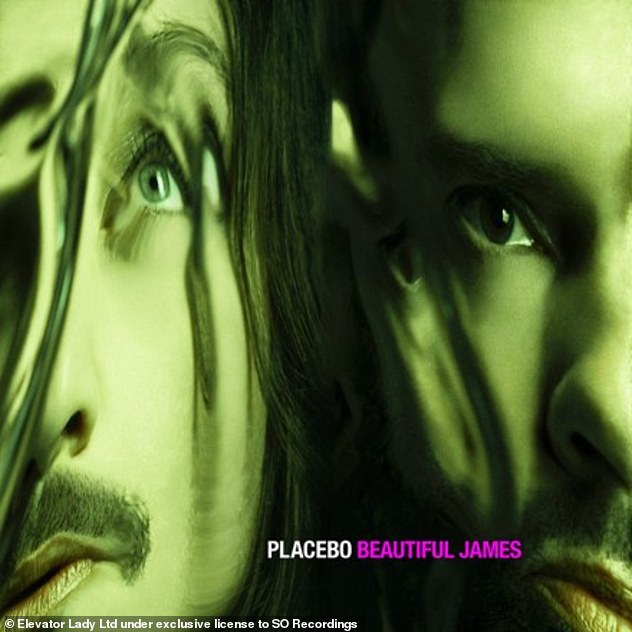 ‘OMG! It’s amazing’: Placebo fans went wild in September when the alternative rock band released new single, Beautiful James, half a decade after dropping their last album, A Place for Us To Dream

‘It was a place to start again. Venturing into new horizons, starting a new chapter.

‘It was the first time we’d begun an album without a permanent drummer. It harked back to the days of me and Brian in his council flat just messing with broken toy keyboards and badly-tuned guitars. The only difference is that we did this one in my studio where there were expensive vintage synths and guitars.’

Brian also previously said that he flipped his usual writing process on its head and they wrote the music first and then added the words so that they didn’t go ‘easy on themselves.’

He told NME: ‘I have what I would describe as a boredom problem. [Stefan] has often said that he’s never met anyone with a lower boredom threshold than myself – and that really influences and informs the way that we work.’ 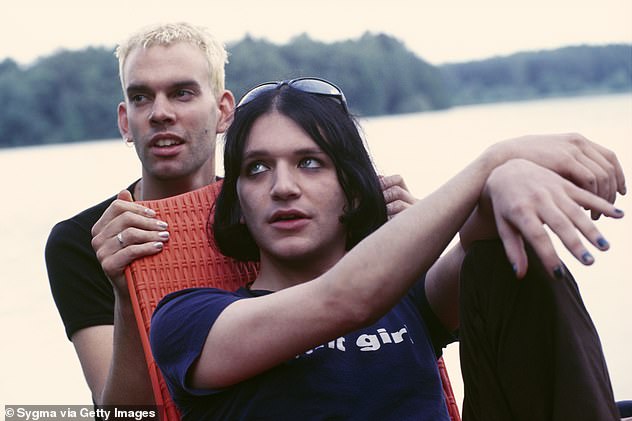 Talented: Admitting he has a ‘boredom problem’, Brian claimed it informs the way that he works and led him to present bandmate Stefan (right) with images first, rather than music (pictured in 1997)