Last summer, as tensions rose over the death of George Floyd at the hands of Minneapolis police, store owners in New York boarded up their businesses in anticipation of rioting or looting.

Now, weeks after former officer Derek Chauvin was found guilty of Floyd’s murder, a a group of artists have taken the wooden planks used to board up those shops and transformed them into outdoor art.

The artists were chosen from among 200 entrants to participate in the ‘Plywood Protection Project,’ using some 200 pieces of plywood sourced from local stores.

Their sculptures address a variety of issues, from Black Lives Matter to the return of  public performance in the wake of COVID-19.

As tensions rose over police violence in the summer of 2020, many high-end New York businesses boarded up their storefronts. Now an art nonprofit has repurposed those plywood planks into political art

Sponsored by Worthless Studio, the ‘Plywood Protection Project’ features five sculptures, each made from dozens of plywood boards sourced from local businesses.

The combination of pandemic lockdowns and Black Lives Matter protests last June saw businesses across New York close up shop and board their windows with plywood planks.

‘The communal slow-down that resulted shifted our focus away from all of life’s minutiae and helped give rise to a powerful Black Lives Matter movement centered on the continued killings of innocent Black lives,’ Worthless Studios said in a statement.

‘In the summer of 2020 we finally left our homes to fight for racial justice while retailers, restaurants and luxury brands boarded up their windows.’ 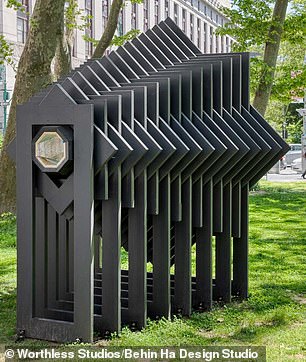 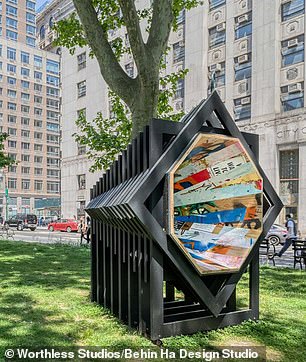 Be Heard, Behin Ha Design Studio’s sculpture for the Plywood Protection Project, is a large-scale plywood megaphone. Plywood panels were arranged to create the conical form of a megaphone

‘The stark contrast of boarded-up buildings opposed to the typical dreamy transparent retail windows was the visual roadblock that sparked the project.’

‘An artist myself, I am aware of the artists’ struggles for access to materials. The pandemic made everything worse,’ Hamamoto told Metropolis. 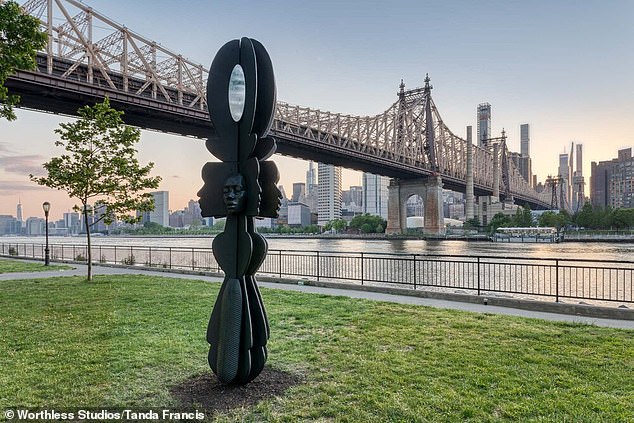 RockIt Black by sculptor Tanda Francis is dedicated to undoing the stigmatization of Blackness by presenting Black identities as divine, with depictions of the African goddesses Mami Wata, and Oshun

‘On top of the difficulties to pay studio rent and show work when galleries were closed, the artists had their access to materials halted.’

By April 2021, it had shot up to $96 a sheet, a 252 percent price hike, according to PolitiFact, ‘on one of the most used pieces of common lumber for construction.’

‘As businesses protected their storefronts with plywood due to the pandemic and the protests, worthless studios saw an opportunity to protect the plywood itself,’ the studio said.

Hamamoto collected more than 200 boards and put out an open call for artists to submit proposals for works, thereby ‘extending and repurposing the life of this material.’

Selected by an industry jury from among more than 200 applications, five artists were given studio space, tools, fabrication and installation assistance, along with a  $500 material budget and a $2,000 stipend. 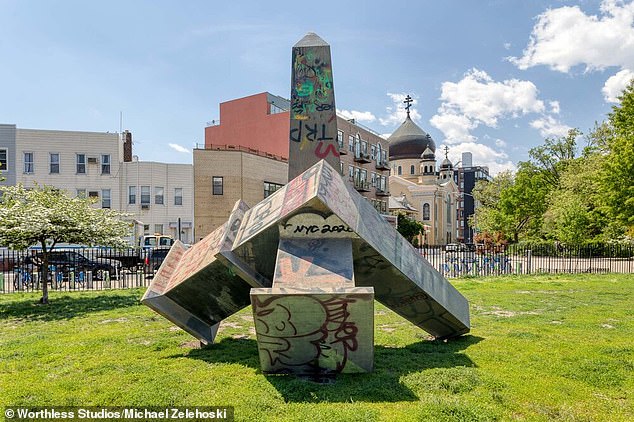 Michael Zelehoski’s Plywood Protection Project work, Miguelitos, combines the concept of an obelisk with that of a caltrop, a spiked, metal object protestors throw in the path of oncoming cop cars

Their pieces, each of which used between 20 and 70 plywood boards taken from local businesses, were unveiled last week.

One is stationed in a green space in each borough and will remain on site until November 1.

On view in Thomas Paine Park in Tribeca, Be Heard by Behin Ha Design Studio, is a  large-scale plywood megaphone. 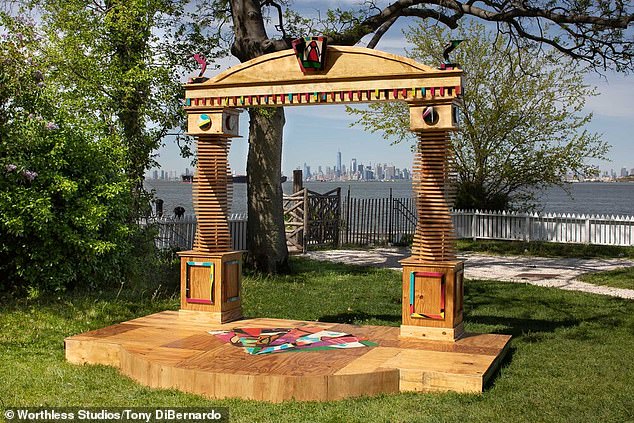 Tony DiBernado’s Plywood Protection Project sculpture, Open Stage, takes the form of a stage where local theater workers will have a chance to perform outdoors – in some cases for the first time in over a year.”

RockIt Black by sculptor Tanda Francis in Queensbridge Park is dedicated to undoing the stigmatization of Blackness by presenting Black identities as divine, with depictions of the African goddesses Mami Wata and Oshun.

‘As people walk through the portals they’re transported into the energy of the protests of 2020: the unified experience of citizens across ethnicities and genders fighting for freedom and justice for Black lives,’ the artists explain. 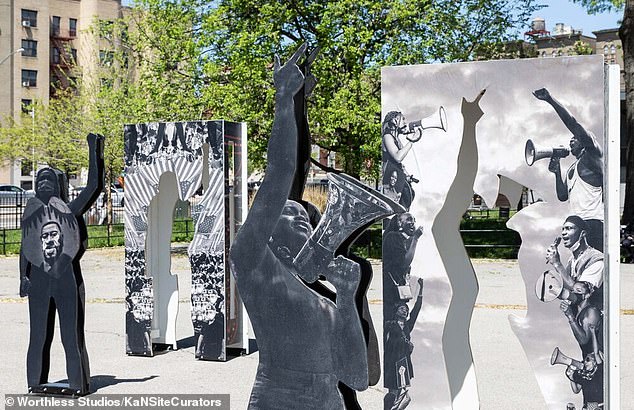 In Brooklyn’s McCarren Park, Michael Zelehoski’s Plywood Protection Project work, “Miguelitos,” combines the concept of an obelisk with that of a caltrop, a spiked, metal object protestors throw in the path of oncoming cop cars.

Zelehoski first encountered caltrops, or “Miguelitos” as they’re called in Chile, during protests against Pinochet in the 1980s.

Tony DiBernardo’s Open Stage, on view at Staten Island’s Alice Austen House, takes the form of a stage where local actors will have a chance to perform outdoors  in some cases for the first time in over a year.

‘I wanted to create a work that could capture and reflect on how this affects theater artists, while also embracing and preparing New York for the future,’  DiBernardo said.

Worthless Studios is also working with various cultural institutions to supplement the exhibit with public programs, including readings and live performances.