A foodie has wowed thousands after sharing her simple recipe for crispy smashed potatoes some have said taste like ‘heaven’.

Plant-based cookbook author, Carleigh Bodrug, from the United States, put her own spin on the traditional Caribbean staple dish, Tostones, which are crisp, flattened plantains, in a viral Instagram video.

Carleigh instead used large potatoes and served them with a green goddess dressing and said the simple recipe is ‘worth the hype’. 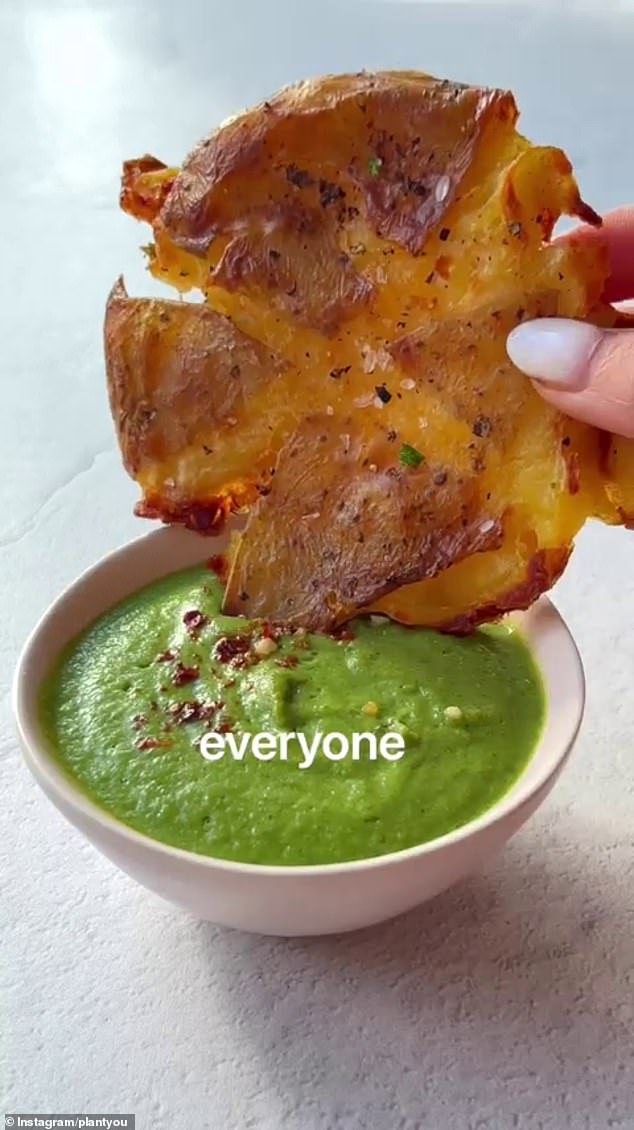 The plant-based chef put her own spin on the traditional Caribbean staple dish, Tostones, which are crisp flattened plantains in a viral Instagram video

‘I tried SMASHED POTATOES and OMG they are worth the hype. In my opinion, small potatoes are overrated for this trend. Find big, golden yukon golds!’ she said in the caption.

Yukon Gold potatoes are a popular variety of the starchy vegetable in America which are perfect for mashing but are rare in Australia.

Carleigh starts by boiling six large potatoes in a pot with six cups of water and a teaspoon of salt. 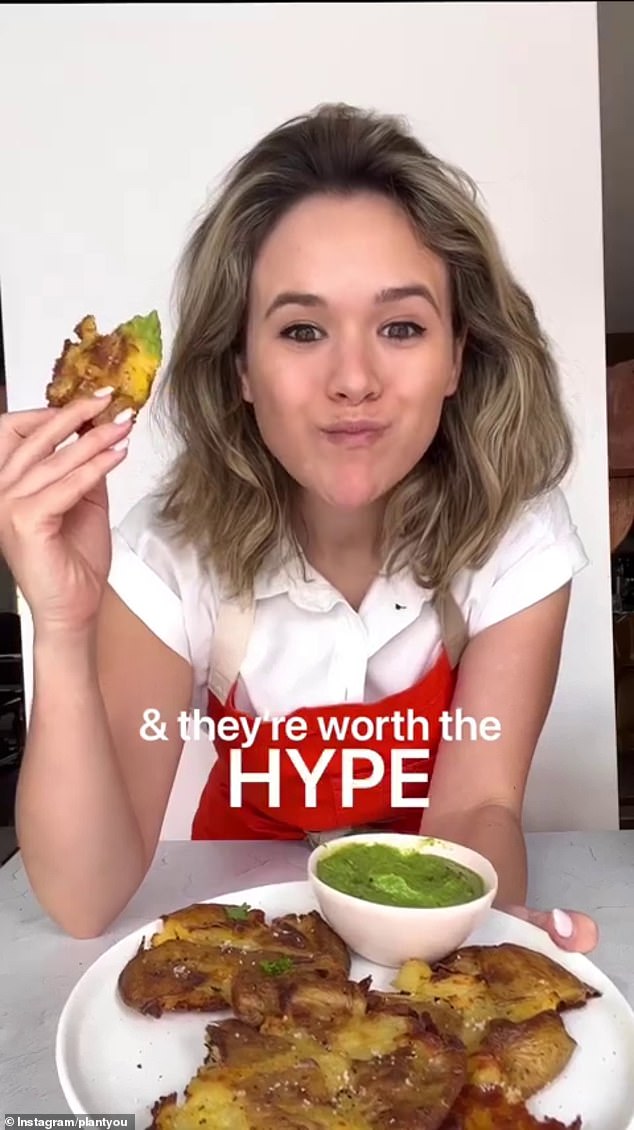 Once the water is boiling, she reduces the heat and allows the spuds to cook for 20 to 30 minutes until they are tender.

Meanwhile, she preheats her oven to 400F which is a little over 200C and lines a baking tray with greaseproof paper.

Once the potatoes are done, she drains the pot, and places them on the baking tray at least one inch apart.

With a butter knife, Carleigh makes a slice through each spud and squashes them down with the bottom of a glass or mug. 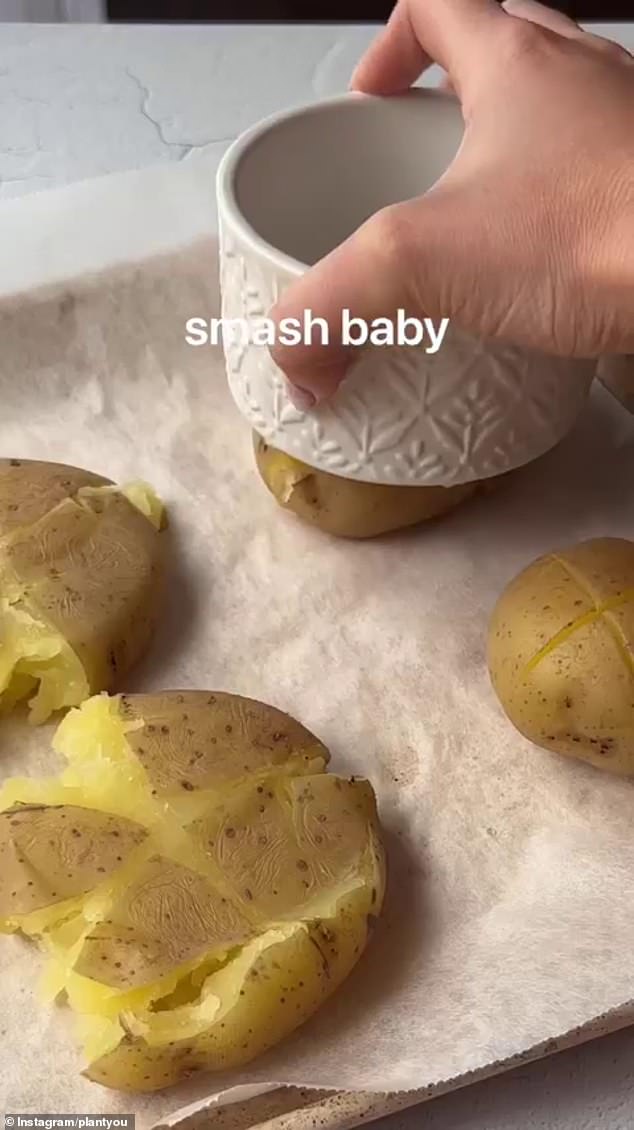 Carleigh boils the spuds in a large pot until they are tender. She then scores them with a knife, smashes them with the bottom of a mug and seasons with salt, garlic powder and pepper

She then seasons them with salt, garlic powder, and pepper as well an optional drizzle of olive oil for extra crispiness.

The home chef said a range of flavourings could also be used for the recipe such as dried herbs, paprika, chilli powder, and cumin as well as spice mixes like Cajun or taco seasoning.

Carleigh places the potatoes in the oven for 30 to 40 minutes until they are golden and crunchy.

While they are cooking, she makes her green goddess dressing by adding parsley, coriander, avocado, garlic, water, raw cashews and salt to a blender and blitzing until smooth. 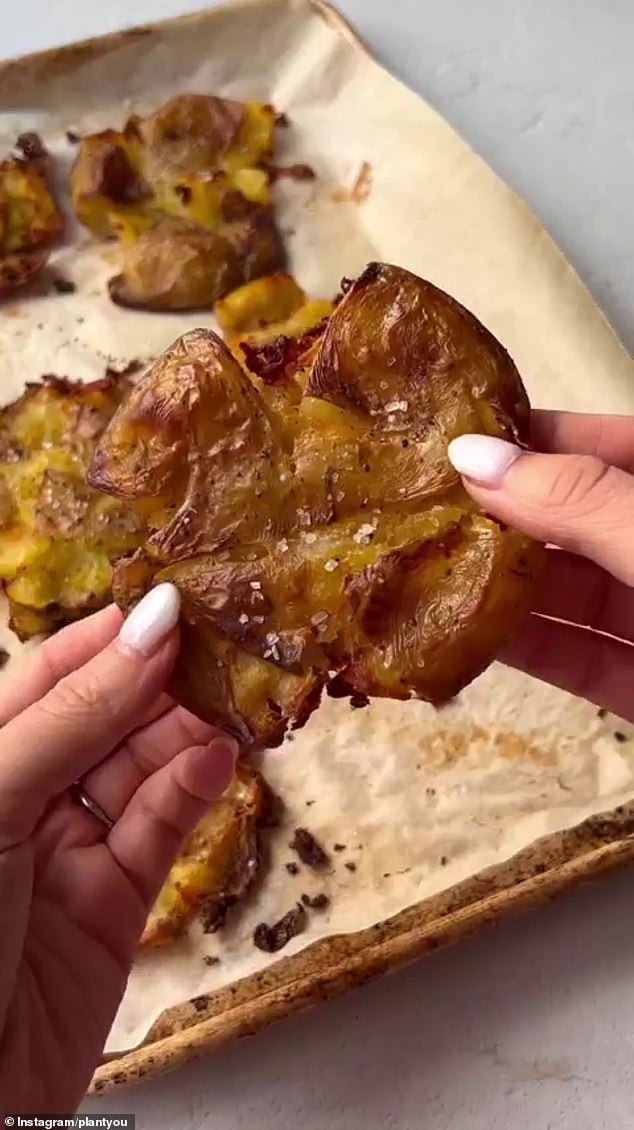 The American foodie’s clip has been viewed 24.8million times and drew in hundreds of impressed comments as many of her 2.2million followers  were keen to try the ‘heavenly’ snack for themselves.

‘These look SO DELISH and that sauce,’ one fan said.

‘Omg why have we never thought to try this with large potatoes!? Only ever made it with minis!’ a second wrote.

‘No cutting or chopping, just smashing,’ another pointed out while a forth said they looked ‘mouth watering’.