Play featuring nudity shown on Serbian TV during the day

Television bosses in Serbia have been criticised after a 24-hour-long play featuring nudity, simulated sex and gore was broadcast live on TV for the entire duration.

But it was simultaneously broadcast on state TV, ruffling the feathers of some viewers who felt it was inappropriate to show such graphic content during the day.

The performance features nudity, simulated sex acts and gore from the start as it depicts twisted versions of classic Greek myths

One critic, named online only as Ana, wrote: ‘How much does it cost citizens of Serbia to broadcast this live for 24 hours on a public service station?’

Another going by the name of Master wrote ‘I will never ever understand who this culture is for’, while ‘Dinja’ exclaimed: ‘C***s on national TV!’

Mount Olympus is set in antiquity and features 27 actors performing almost solid for a full day, with only three short breaks in the production.

The performance combines dance, physical theatre and dialogue to tell stories based on ancient Greek myths, but twisted and distorted to grotesque extremes.

While the performance was critically acclaimed, others questioned whether it was appropriate to show it on a public broadcaster during the day 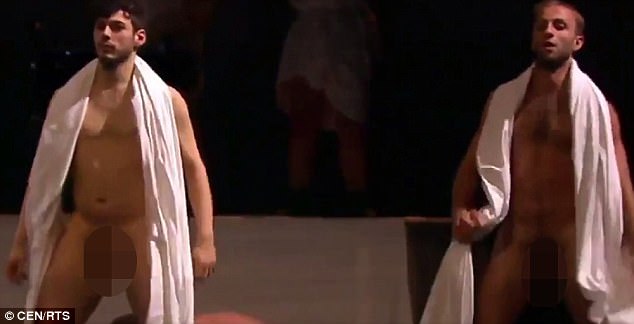 Others took issue with the play itself, saying the didn’t understand it and questioning how much it cost taxpayers to show on television

Fabre, 58, is a Belgian multidisciplinary artist, playwright, stage director, choreographer and designer whose career had sparked a string of controversies.

Previous works have included throwing live cats in the air, burning banknotes and writing the word ‘money’ in the ashes, and making drawings with his own blood.

The Belgrade International Theatre Festival is renowned for its experimental performances and takes place annually in the Serbian capital.