The hosts were well-beaten as the visiting Springboks captialised on a series of individual errors and ill-discipline by Eddie Jones’ side to dominate proceedings and secure a landmark 13-27 victory.

England attempted a late comeback after South Africa were reduced to 14 men as the match entered it’s final ten minutes but were unable to do so as the visitors defensive resolve held strong.

Sportsmail’s ADAM HATHAWAY and ALEX BYWATER grade the England and South Africa players after the match in London. 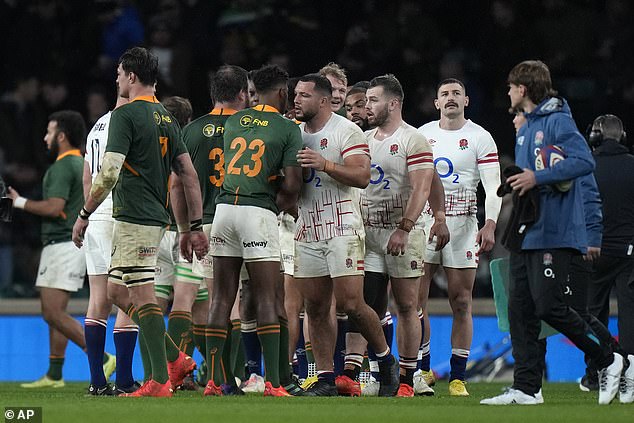 Missed a couple of high balls which is a newsflash in itself and not his game. Not as influential on front foot.

Not the return he was after. First start since two in Australia but spilled one aerial ball and was subbed at the break.

No way to mark his 50th cap more than 11 years after his first but not the impact he wanted with ball in hand. 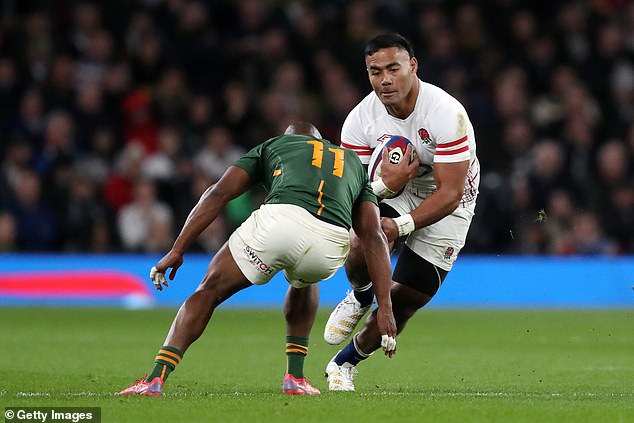 Fluffed a couple of pots at goal and looked to struggle with his ankle. Good work for Slade score when England were down and out. 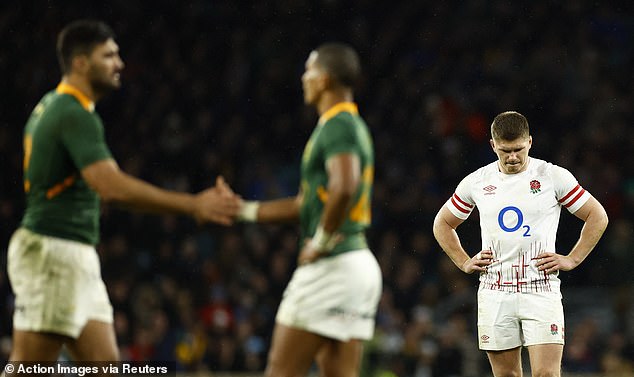 Failed to make an impression and couldn’t get into the game like he did late last week against New Zealand. Frustrating.

Not a day to play on the back foot. Skinned for South Africa’s first try when exposed and looked injured when taken off.

Nightmare last week but a bit more spark this time in a difficult scrap for the England half-backs but stuck at it for 67 minutes.

First start for 18 months and hooked at half-time like the rest of the front row without making an impact. 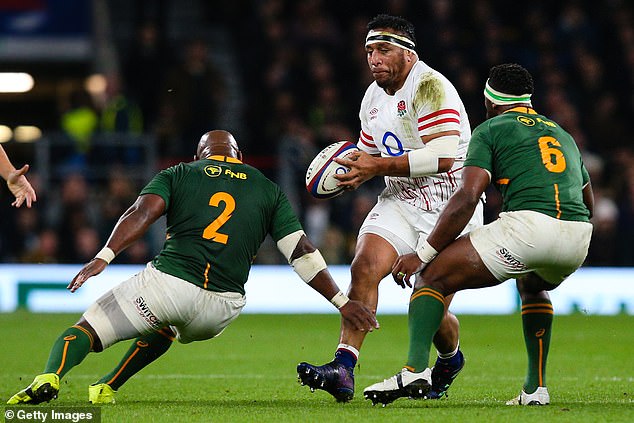 First start since the summer tour of Australia ended after 40 minutes as England were overpowered early by the Springbok front row.

A starting regular but could deal with the Boks and finds himself under pressure from Will Stuart after being subbed at half-time.

England’s best player and tried to drag rest with him. Hard at it all evening and took his personal fight to Etzebeth, won turnovers, but needed more support. 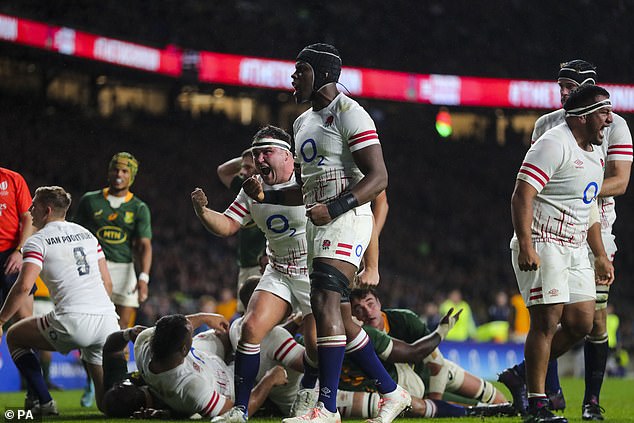 Not as prominent as he has been recently. Stupid penalty given away in second half and struggled in match-up with Bok locks.

Discipline poor as he leaked penalties, conceding three in the first half, before being taken off early in second half.

Lost his battle with Siya Kolis but battled hard. Sinbinned in second half as England frustrations grew and not his best day. 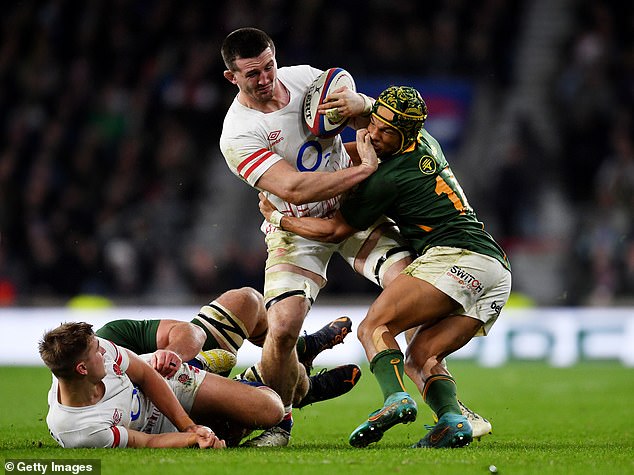 Another mixed bag from Big Billy – straight into it from the off but faded before being replaced on 56 minutes.

Targeted by England’s kicking game but was too often given time and space to catch so did so easily. Rock solid at the back and showed he can attack too with involvement in first Springbok try. A seriously classy operator. 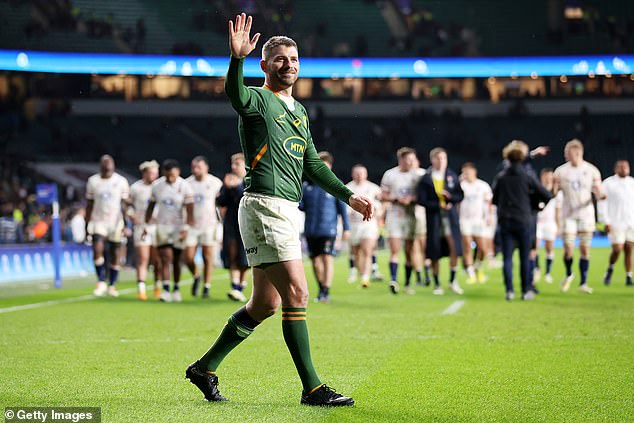 The Bulls man is 26 but he looked like a teenager on the wing until he exploded into life to finish off a brilliant South Africa breakaway try. His sidestep to beat Marcus Smith was outstanding. Also produced a brilliant second-half try-saving tackle on Freddie Steward.

Not much of an impact and wasn’t tested enough defensively by an England side which never got going. Was given an easy ride.

He rarely breaks clear like a gazelle, but he almost always beats the first man. A brutally strong carrier and underrated stepper.

One brilliant high ball take. He did all the unseen work that was required of him but didn’t get much of a chance to fire in open space. His team were still too good for England regardless.

Chose excellent options to take drop goals in either half and executed both of them brilliantly. He followed his first half effort with a brilliant counterattack to help Arendse score. 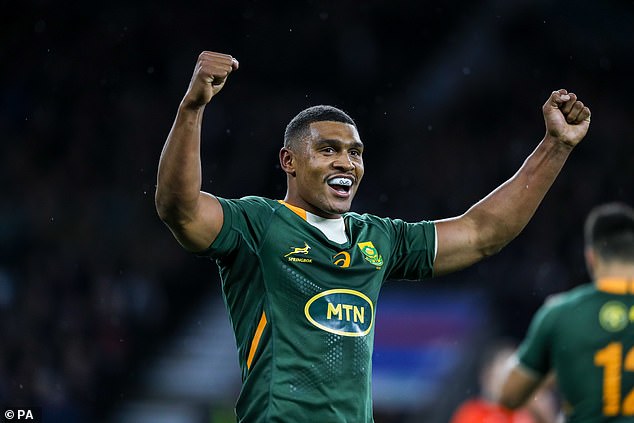 On kicking duties and his first effort was wayward. But after that he controlled things nicely and was exceptional with the boot. Stuck a brilliant long-range penalty in the second half. Suffered late ankle injury. 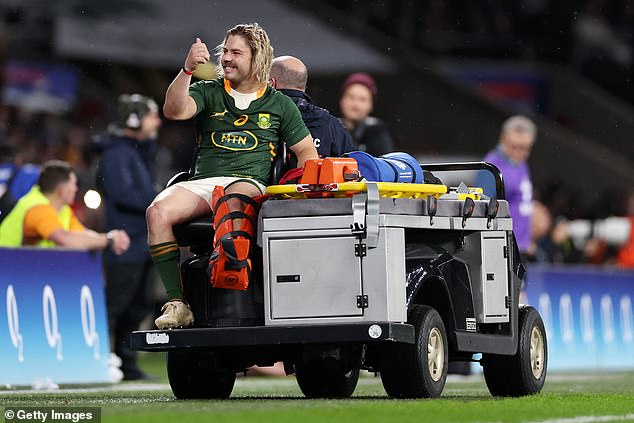 Got the better of Kyle Sinckler, who struggled, at an early scrum. England were poor in that area even with a new front row for the second half. Nche was replaced by Steven Kitshoff.

Warned by referee Angus Gardner and then penalised at a scrum. Not at his powerful best before he left the field for the impact of Malcom Marx to come into its own.

Also penalised at a scrum which allowed England to kick a penalty but after that he got on top and showed impressive stamina. He saw off Mako Vunipola and was also too strong for Ellis Genge. Had to return to the field after his replacement Thomas du Toit was sent off for a dangerous tackle on Luke Cowan-Dickie. 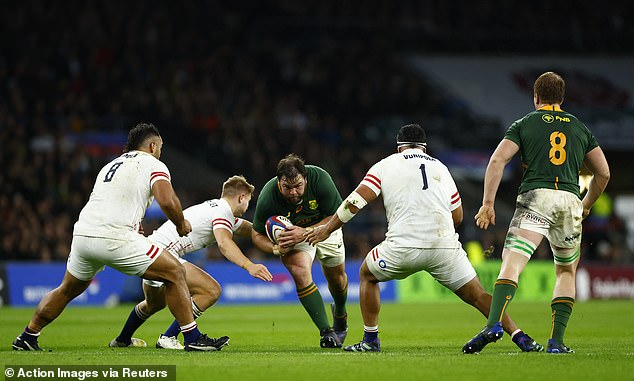 Athletic steal got his team out of trouble after Sinckler rampaged forward and showed he is about more than just physicality. Did get involved in a trademark skirmish with Maro Itoje but grabbed crucial second-half try.

Not in Lood de Jager’s class but worked his socks off. Dropped one restart which would have been a disappointment to him. Replaced by Kwagga Smith soon after.

Failed to put the stamp on good field position for his team when held up over the line in the first half. Recovered impressively before reluctantly leaving the field late on for a head injury assessment. The medics deserve credit for ensuring Kolisi was removed. 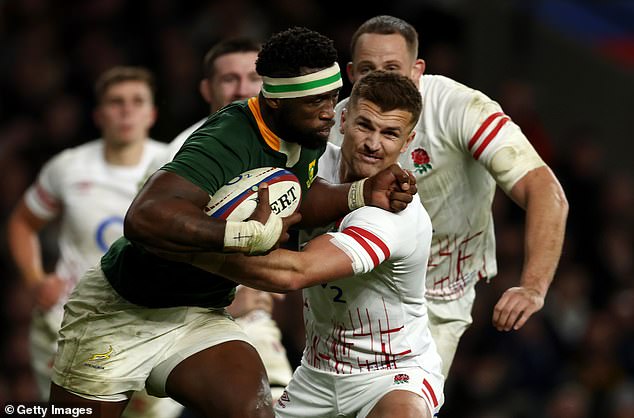 Not a natural No 7 and gave away one penalty for an off-the-ball tackle but he is monstrously physical and sums up his team’s approach. His impressive performance was a key part of South Africa’s dominance.

A man to watch out for at Test level in the next year or more and a player of real promise but he didn’t quite deliver the goods at Twickenham. Replaced by Marco van Staden.