Poetic end for a long-lost hero: the inspiring story of Wordsworth’s descendant can be told

Digging in the chalky soil of his garden in Hénin-sur-Cojeul, a village near the town of Arras in Northern France, in 2013, a farmer made a grisly discovery.

Not far beneath the surface, the unmistakable form of a human skeleton appeared.

The farmer called the gendarmerie at once — but it was soon decided that a different kind of detective work would be needed. For this was no murder case: buried with the body was a century-old watch, together with scraps of military uniform. This was the body of a fallen soldier.

He was a British officer who had died in battle nearly 100 years before, shot through the heart.

Lieutenant Osmund Bartle Wordsworth’s body was found in a garden in Hénin-sur-Cojeul, a village near the town of Arras in Northern France, more than 100 years after he was killed in the First World War

In 1917, the Arras area had been shattered by some of the bitterest combat of the Great War. About 160,000 British soldiers lost their lives.

While strenuous efforts were made to identify and rebury the fallen after the Armistice in 1918, hundreds of families were denied the comfort of knowing where their son or husband had been killed, or of having a grave to visit.

In the decades since, many human remains have been discovered by agricultural workers in these fields and in the nearby villages and towns.

If the bodies cannot be immediately identified, exhaustive investigations follow. In the meantime, the bodies are honoured with a suitable burial.

The body in Hénin-sur-Cojeul was painstakingly disinterred by a forensic archaeologist, using small trowels and spoons so as not to damage the fragile bones.

A DNA sample was taken and the remains were reburied at the Commonwealth War Graves Commission’s cemetery at Écoust-Saint-Mein, near Arras, with ‘Known Unto God’ the only tribute. 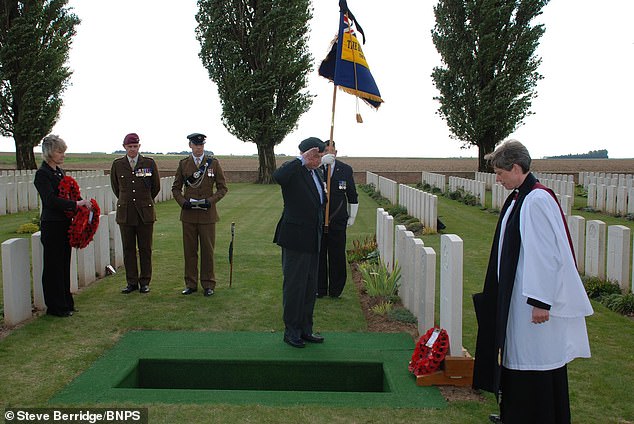 The watch that was found with him, together with a sword clip, a torch, a whistle (used by officers as a signal to advance) and fragments of uniform, all suggested that the remains were those of an officer.

The bugles etched on the uniform buttons were the regimental crest of the Oxfordshire and Buckinghamshire Light Infantry. So the artefacts were sent across the Channel to the Soldiers of Oxfordshire Museum, where volunteers began an investigation to identify the unknown soldier.

Lt Col Murray — father of the comedian and historian Al Murray — told the Mail this week that his work has been motivated partly by his own experiences of war. As a 19-year-old 2nd lieutenant with the Royal Engineers, he took part in the abortive Suez campaign in 1956.

‘The action was intense,’ he recalled, describing how he saw an officer killed while defusing explosives. ‘Egypt is hot, so we had to bury him quickly, in a blanket, in a small cemetery.’

The memory of that hasty burial stayed with him, although that officer’s family at least had the comfort of knowing what had happened.

By contrast, his wife’s father was killed near Dunkirk in May 1940: it took her mother 18 agonising months to learn of his fate and battlefield burial.

So Lt Col Murray and his colleagues were determined to discover the officer’s identity. 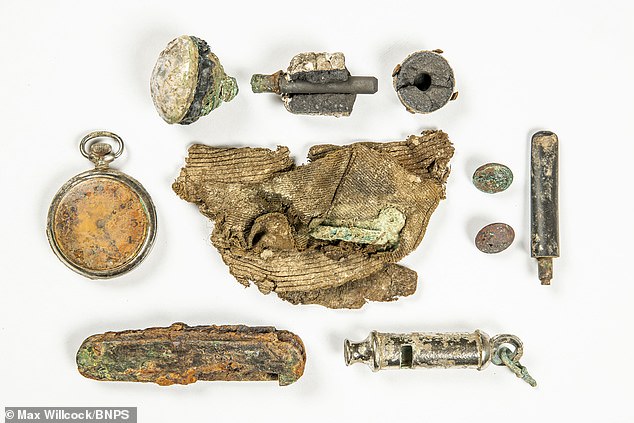 The watch that was found with him, together with a sword clip, a torch, a whistle (used by officers as a signal to advance) and fragments of uniform, all suggested that the remains were those of an officer

His team have become skilled at deciphering ‘cold cases’, including some of the 250 bodies found in a mass grave at Fromelles, northern France, in 2008.

Once they establish a possible identity, they present their evidence to the Ministry of Defence’s Joint Casualty and Compassionate Centre (JCCC) in Gloucester, the ultimate authority responsible for naming a casualty.

JCCC ‘War Detectives’ then use DNA testing (if DNA is available) and genealogical research to conclusively identify bodies.

So what did they learn of the Hénin-sur-Cojeul officer?

Murray and Shannon knew the 5th Battalion of the Oxfordshire and Buckinghamshire Light Infantry fought in the Battle of Arras.

On May 3, 1917, they had attacked heavily defended German trenches. Some 530 of their number were killed, wounded or missing, including five junior officers.

Three were ruled out: one had died of wounds, DNA testing eliminated a second and a third had been reported killed and had probably been buried by the enemy.

That left two: John Legge Bulmer, an Oxford contemporary of the poet T. S. Eliot; and Charles Croke Harper, son of the vicar of Broughton, Buckinghamshire.

Yet the Ox and Bucks’ action took place at least nine kilometres from where the body was found. 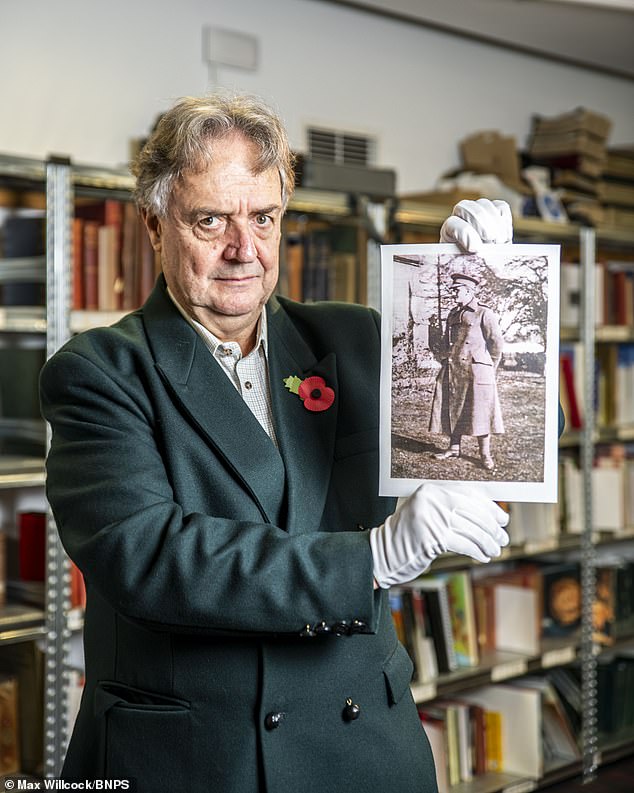 Tom Shannon with a photograph of Lieutenant Osmond Bartle Wordsworth. The research by retired army officers Lieutenant Colonel Ingram Murray and Major Tom Shannon took them to the US, Australia, Ireland, across the UK, and Canada where they were able to slowly rule out all of the missing officers as likely candidates

Could Bulmer, or Harper, have been wounded and taken to a medical aid station at Hénin, where they had subsequently died? It seemed unlikely — and was not enough to warrant DNA testing of possible descendants.

So Murray and Shannon returned to the archives. It was then they had what Murray calls ‘the Eureka moment’. Another missing officer had transferred from the Ox and Bucks Light Infantry to the 21st Company of the Machine Gun Corps in April 1916. His name was Osmond Bartle Wordsworth — a descendant of the great poet.

The War Diary of the 21st Company confirmed an attack on Hénin — and the report mentioned him.

They then found Wordsworth’s name in another document, the Register of Soldiers’ Effects, which recorded money owed to soldiers who died while serving. After his name was written ‘9th Battalion Ox and Bucks LI’. Might he not have had a chance to exchange his uniform after a recent transfer?

Further investigations revealed that Wordsworth had been born in 1887, one of nine children of the sub-dean of Salisbury Cathedral. As a pupil at Winchester College, he’d won several academic prizes.

Wordsworth went on to read Classics at Trinity College Cambridge and published a novel.

In 1914, he emigrated to Canada to teach in Toronto. But in May 1915, in New York, Wordsworth boarded a passenger ship, RMS Lusitania, bound for Britain, intending to fight for his country, which was at war with Germany.

He was with his sister Ruth, who was returning from working as a missionary. Just off the coast of Ireland, the Lusitania was torpedoed by a U-boat — and with too few lifebelts to go around, Osmond gave his to another passenger. 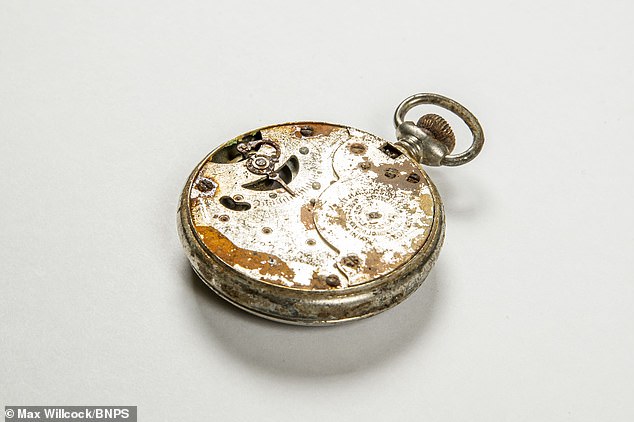 Pictured: Lieutenant Osmond Bartle Wordsworth’s pocket watch was found with his body more than 100 years after his death

He was among the last to leave the ship, which sank in 18 minutes. But miraculously, both he and Ruth survived by clinging to wreckage. They were rescued and eventually reunited, though more than 1,200 people died.

A month later, Osmond was commissioned as a Second Lieutenant in the 5th Ox and Bucks. But finding himself languishing in a depot, he transferred to the 21st Company Machine Gun Corps, embarking for France on August 31, 1916.

Life expectancy for a junior officer on the Western Front was six weeks. However, he survived until April 2, 1917, when his company attacked the hamlet of Hénin- sur-Cojeul in advance of the main Arras offensive a few days later. As the attack began at 5am, Wordsworth spotted that one of the gun crews was having trouble getting into position.

Rather than sending one of his men, he went forward to help. He was shot through the heart.

After the battle, his men buried him near where he fell.

His division did later establish a field cemetery outside the village, digging up the bodies of the fallen and reburying them. Lt Col Murray believes Wordsworth’s body must have been missed.

So the museum team advertised for Wordsworth’s descendants. A man came forward — but a female descendant is needed for the DNA sample. The JCCC then stepped in and tracked down a suitable descendant.

And now, as we approach Remembrance Sunday, it has been confirmed: it is a match.

The body is that of Osmond Bartle Wordsworth. ‘It is a very satisfactory ending,’ says Murray.

With no known grave to visit, Osmond Wordsworth’s name had been inscribed on a memorial in Arras, as well as on war memorials at Winchester and Trinity College.

Now his grave is to be rededicated in a ceremony in January 2022, attended by members of the Wordsworth family. ‘The country lost a very fine teacher,’ says Lt Col Murray. ‘And a very brave man.’

But at long last a grave will bear his name.