By Chris Hastings, Arts Correspondent For The Mail On Sunday

Pointless star Richard Osman has been criticised for spreading a ‘Labour scare story’ by claiming in a tweet that the Tories were planning to sell off the NHS.

Osman, 49, co-host of the BBC1 quiz show, wrote: ‘I try not to tweet political opinions, but as it’s my birthday, allow me just one.

‘The Tories do want to sell off the NHS. Not in one go, just bit by bit until it’s unrecognisable.

Osman, 49, co-host of the BBC1 quiz show (pictured), wrote: ‘I try not to tweet political opinions, but as it’s my birthday, allow me just one

‘You’ll turn up one day and there will be a priority waiting room. They’ve always been open about it.’

Osman, who also presents Richard Osman’s House Of Games on BBC2, posted the tweet to his 800,000 followers on Thursday.

‘It was widely retweeted and echoes the Labour Party’s controversial claim that the Conservative Party plans to sell off the NHS to Donald Trump as part of any trade deal after Brexit.’ 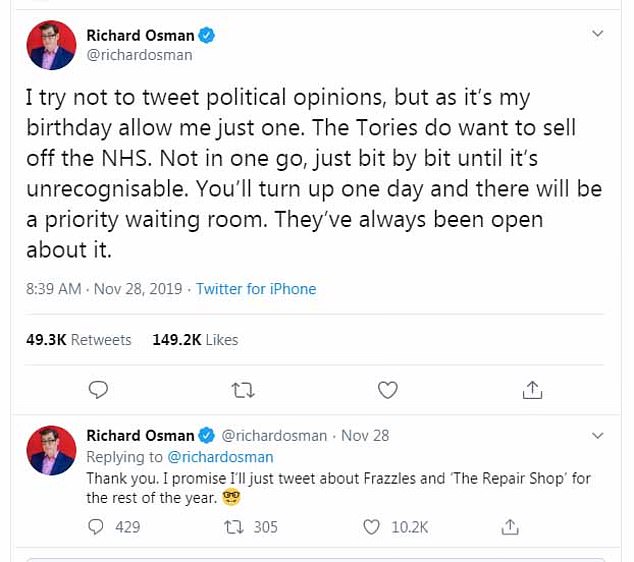 Not surprisingly, his claim was welcomed by those on the Left.

One Jeremy Corbyn supporter wrote: ‘So vote Labour to save it! Just finished off that for you, Richard.’

But others took exception to the tweet. A Conservative supporter tweeted: ‘I didn’t know birthdays meant you got to make b******s up on Twitter.’ Author Toby Young wrote: ‘You’ve been taken in by a Labour scare story.

‘The NHS has existed for 71 years and for 44 of those years the Conservatives have been in charge. If they were going to privatise it, they would have done so. It’s nonsense.’

BBC editorial guidelines on social media use – which apply to all of the Corporation’s employees – state that staff are free to engage in social media activities if they wish.

But the guidelines warn against posting anything that could damage the Corporation’s reputation for impartiality. A BBC spokesman said: ‘Richard is not a BBC staff member – he is a presenter of entertainment shows, not involved in any news or political output and as such any expression of his personal political views does not affect the BBC’s impartiality.’

The Tories do want to sell off the NHS. Not in one go, just bit by bit until it’s unrecognisable. You’ll turn up one day and there will be a priority waiting room.