British polar explorer Ben Saunders has been forced to abandon his quest to cross Antarctica unassisted after ‘ferocious’ conditions left him without enough food to complete his journey.

Mr Saunders, 40, attempted what he described as the first solo unassisted crossing of Antarctica in memory of his friend Lieutenant Colonel Henry Worsley, who died on an expedition to traverse the Antarctic alone last year.

He aimed to spend 65 days travelling more than 1,000 miles across Antarctica, but was forced to cancel the trip when he arrived at the South Pole on Thursday, after 52 days. 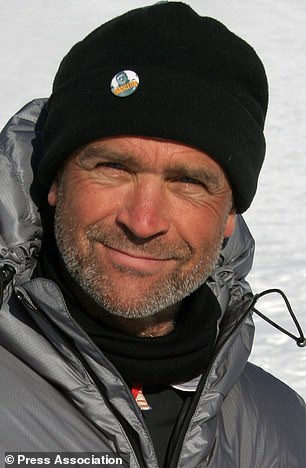 Ben Saunders, 40,(left) attempted what he described as the first solo unassisted crossing of Antarctica in memory of his friend Lieutenant Colonel Henry Worsley

Mr Saunders said he had just 13 days of food for the remainder of the expedition, which he expected to last 17 days, but only with near perfect conditions and unhampered skiing.

Air rescue would also be impossible on certain sections of the final stretch due to the nature of the terrain, he said.

Despite ending his quest, Mr Saunders said he is only the third person in history – and the only Briton – to have skied by himself to both the North and South poles.

He put up with harsh conditions including temperatures of -30C with windchill and long periods of zero visibility caused by whiteouts.

‘I made a promise to Henry to get home in one piece,’ Mr Saunders said.

‘As much as I am determined to finish this trip for him, I need to make my decision based on safety and not let my own determination cloud my judgment.

‘I don’t think Henry would be telling me to go for it given my concerns about the diminished safety margin. It feels like the most respectful thing I can do after Henry’s fate is to be prudent and safe.’

Lt Col Worsley, inspired by Edwardian explorers Shackleton, Scott and Amundsen, aimed to be the first person to cross Antarctica on foot without assistance.

Struck down by exhaustion and ill health after covering 900 miles, the 55-year-old was forced to call for help, but despite being airlifted to hospital in Chile, doctors were unable to save him. 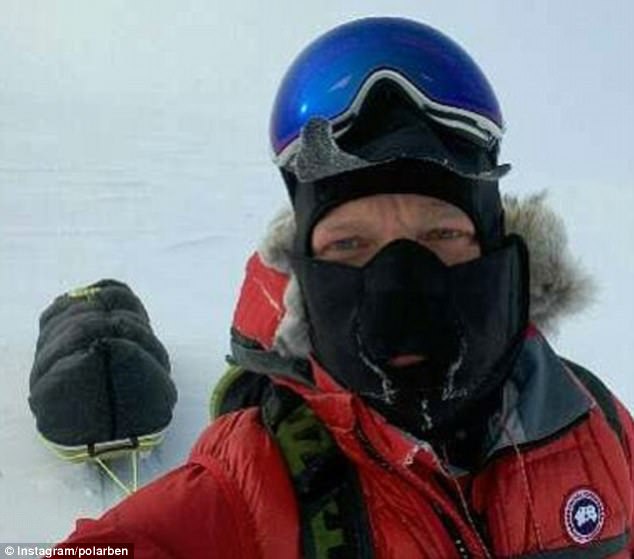 Mr Saunders(pic) said he had just 13 days of food for the remainder of the expedition, which he expected to last 17 days, but only with near perfect conditions and unhampered skiing 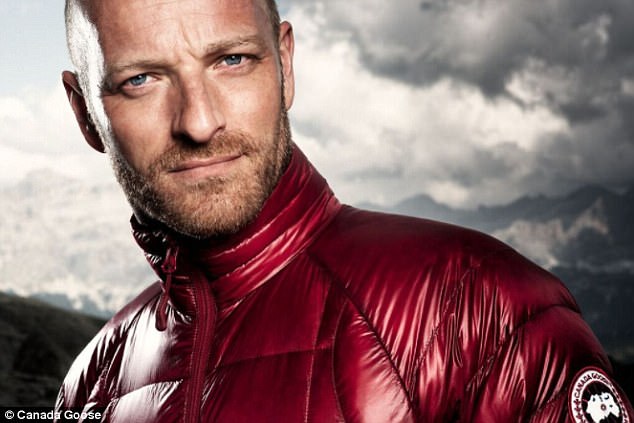 Mr Saunders used his trip to sponsor the Endeavour Fund, part of the Royal Foundation of the Duke and Duchess of Cambridge and Prince Harry, which supports injured military veterans.

It was his 12th expedition to the polar regions having covered more than 7,000km since 2001.

At 27, Sears is believed to be the youngest person to complete the trek. 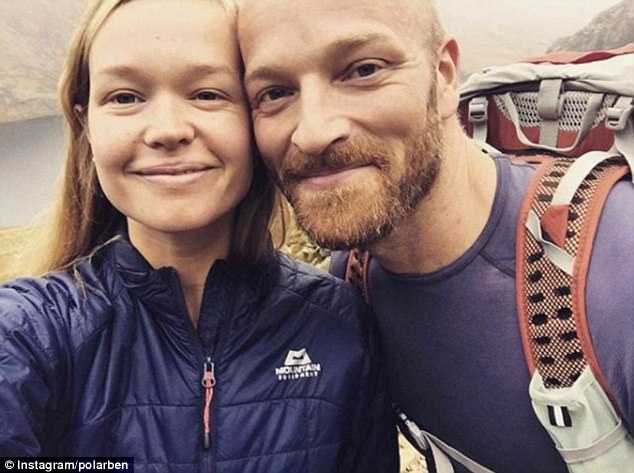 Mr Saunders got engaged in July to Pip Harrison, who works for his firm Beardmore Ventures 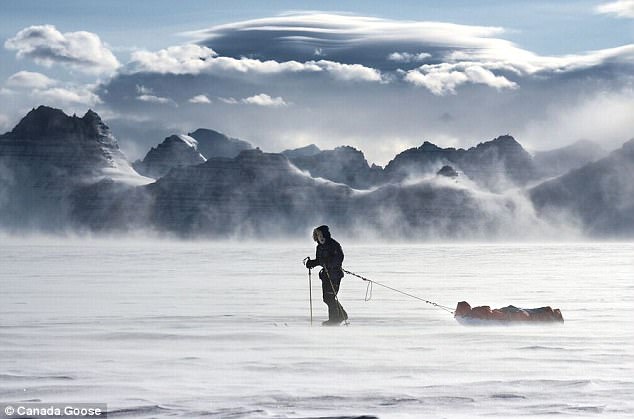 Mr Saunders is partnering with Canada Goose, which issued the above publicity photograph

Lieutenant Scott Sears, 27, of the First Battalion Royal Gurkha Rifles, survived a gruelling 700-mile walk across the Antarctic wilderness to reach the pole on Christmas Day.

Facing winds of up to 150mph, temperatures as low as -50C and having to carry 90kg of supplies every step of the way, the hero soldier battled through to raise thousands of pounds for the Gurkha Welfare Trust.

Wishing his followers a Merry Christmas from the South Pole, he posted on Instagram: ‘I’m very proud of what has been achieved over the last 38 days but serving alongside the Gurkhas will always be my proudest achievement.’

This is far from the first extreme adventure undertaken by Ben Saunders.

In March he told how he only changed his underwear three times in 108 days when he was making his history-making mission to the South Pole on foot.

During a 1,795 mile traverse across the -50C tundra, the Briton said he and his teammate could only take the bare essentials, so pants were put to one side. 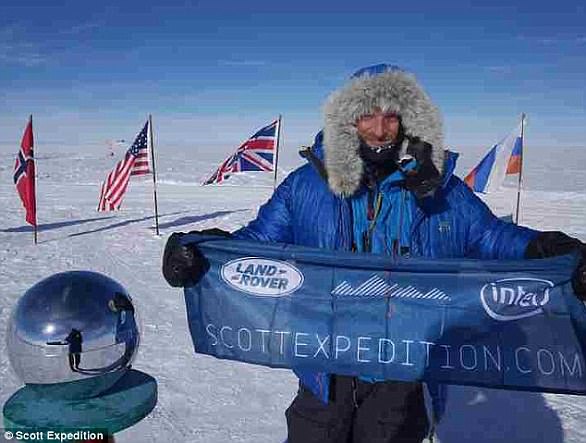 Speaking at the Royal Geographical Society in London, Mr Saunders recalled some of the more harrowing moments during his polar voyage in 2013.

Chaffing, hypothermia, extreme hunger and fatigue were just a handful of the things he battled along the way.

He spent a decade preparing for the expedition – taking the same return loop that defeated Captain Robert Falcon Scott and his team a century ago.

Over the years, others have also perished on the vast expanse of ice. And Mr Saunders confirmed that it was one of the toughest things he’s ever faced. 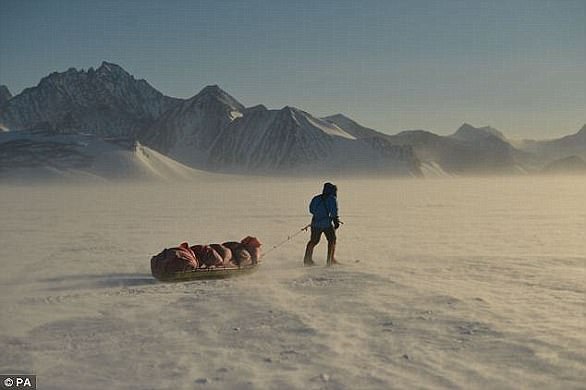 During the 1,795 mile traverse across the -50C tundra, the Briton said they could only take the bare essentials, so pants were put to one side

He said the two of them agreed on a ‘no moaning policy’ in a bid to keep upbeat as they went.

Mr Saunders says that being in the South Pole is like nowhere else on the planet and for three months he and Mr Tarka did not see a single thing.

Recalling the desolate landscape they encountered, he said: ‘You’re in a tent in the middle of nowhere. There’s nothing, no animals, nothing. Just white.

‘We stayed on the same compass bearing for 31 days and didn’t see anything. I didn’t have a mirror to check what state I was in. It was bleak.’

The Devon native said one of the toughest times hit towards the end of their journey when they almost ran out of food.

Throughout their adventure they hauled 440lb sledges behind them, and en route they deposited food depots, which they would re-visit on their return.

Mr Saunders said they looked like ‘two fat men dragging bath tubs’ and they had to train for months to be strong enough to pull the heavy loads.