A masked paedophile hunter was arrested after she confronted a man at an airfield and accused him of grooming a 12-year-old girl.

The woman, known only as Stacey, stormed the man’s place of work in Northamptonshire and tried to perform a citizen’s arrest.

Stacey, from vigilante group Hunters 25/8, then clashed with his colleagues who called the police when she refused to leave the airfield.

Dramatic video shows her accusing the workers of being ‘f****** wronguns’ because they ‘defended a peadophile’.

Police arrived and took her into custody after she refused to calm down and ‘stop swearing in public’. But she was later released at the scene.

The footage of the incident was broadcast live on Facebook yesterday and has been viewed more than 150,000 times.

It shows the group approach the man outside his workplace and accuse him of sending explicit images of himself to one of their decoys posing as a child online.

The female hunter tells him he is a danger to children and says: ‘We’ve come here to expose you for the scum that you are.’

He claims he was ‘just playing’ and insists: ‘It’s not children, it’s not real.’

The man then gets out his phone but the hunters seize it as evidence. 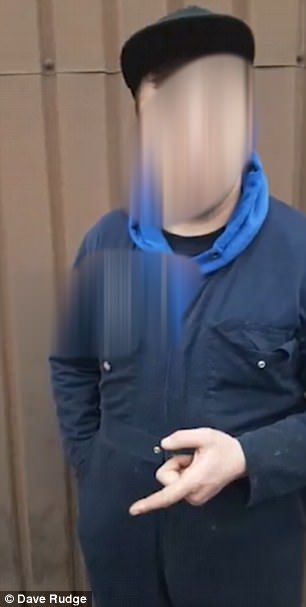 A scuffle breaks out as he tries to snatch it back, screaming: ‘I have a right to have my phone.’

He starts sobbing as the hunters pin him against a wall and he cries: ‘I have a dead child.’

His colleagues hear the commotion and hurry outside to confront the hunters.

The man filming then threatens to turn the camera on them if they do not stop interfering, but they question his authority and urge the group to release their colleague.

A man claiming to be the airfield manager approaches and says: ‘Excuse me, can I ask you to leave the airfield, please?’

The manager replies: ‘I don’t care. Get in your car and leave.’

Police then arrive and the man’s phone is handed over to officers along with chat logs.

But Stacey becomes irate when she notices one of the evidence folders is missing and accuses the man’s colleagues of hiding it. 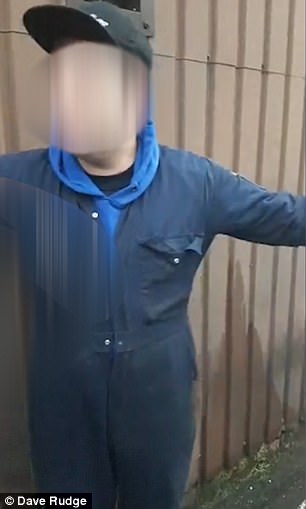 She marches towards them, shouting: ‘F****** wronguns.’ A police officer tells her to tone down her language and arrests her – drawing cheers from the workers.

The woman was released without charge and the missing evidence file was recovered by police.

But social media users were appalled by the way officers responded and vented their outrage on the force’s Facebook page.

Hayley Stimson wrote: ‘Totally shocked at the police treatment of Stacey. You should show far more respect for the hunters when they’re doing a brilliant job keeping our kids safe.’

Sophie Gallagher commented: ‘You’ve got people trying to help kids and your officers are arresting them. Absolutely disgusting. Should be ashamed of your officers.’

Alison Yeaman added: ‘This police force puts the police forces down all around the country. It’s a joke. No wonder I’ve no faith in police.’

A spokesman for Thames Valley Police said: ‘Officers were called yesterday at about 9.10am following reports of an altercation.

‘Officers attended the scene and arrested a man and a woman. The woman was arrested on suspicion of a public order offence and has since been de-arrested.

‘The man, who is aged 29, was arrested on suspicion of causing a female aged 13 or over to engage in sexual activity. He is currently in police custody.’