Police call for the Notting Hill Carnival to be banned

The Notting Hill Carnival was branded a disgrace last night after it was revealed that 31 police officers were attacked during the two-day event.

They were slashed with broken bottles, spat at, bitten and had acid thrown at them.

In one of the worst confrontations, three PCs had bloody spit sprayed in their faces by a man claiming to be HIV positive.

Frontline police said ‘enough is enough’ and called for organisers to help safeguard those who dedicate their lives protecting others.

Four people were stabbed, more than 300 arrested and dozens of weapons seized during Europe’s biggest street carnival. Although there were fewer arrests than last year’s record 454, a three-week crackdown had seen hundreds banned from attending.

‘We cannot carry on like this. It is a disgrace,’ he said. ‘My brave colleagues were attacked for just doing their job.

‘This is not acceptable. What other event would be allowed to carry on regardless with so many police colleagues under attack?’

‘There is a growing lobby calling for the carnival to be moved to Hyde Park and made ticket-only to deter opportunist criminals. Changes were first proposed in 2000 when two men were murdered. In 2008 there was a riot. 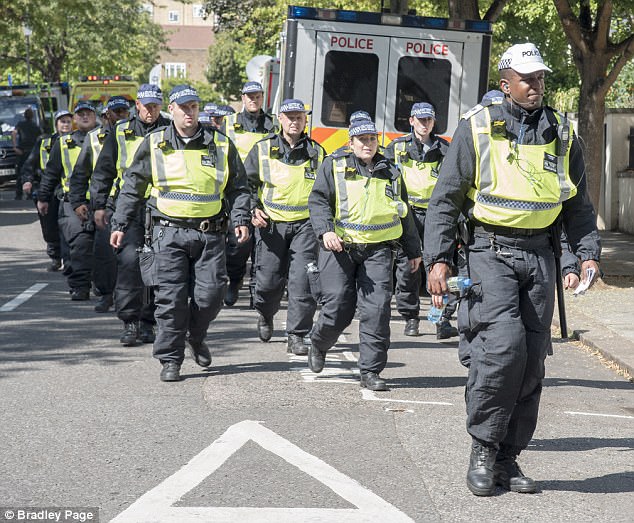 Police were slashed with broken bottles, spat at, bitten and had acid thrown at them

The Met threw a ring of steel around this year’s parade. Senior officers were concerned that feuding street gangs could hijack the event, spurred by simmering anger over the Grenfell Tower disaster.

They were also concerned that the huge crowds could be targeted by terrorists. Officers seized weapons including knives, CS spray, batons and a hammer. Several panics were sparked by troublemakers spraying acid-like liquids.

London Mayor Sadiq Khan and other senior politicians support the carnival in its current form.

But Met Assistant Commissioner Martin Hewitt said: ‘I do not believe that, when policing an event of celebration for London, it is acceptable that 31 of my officers were injured.’