Police car crashes into bollard during chase in Wales

A dramatic car chase ended abruptly for one police vehicle after it failed to turn a corner and crashed into a concrete bollard.

One of the vehicles completely fail to make the turn and crash straight into the bollard, with the front panel of the car flying through the air.

The footage was captured on dashcam yesterday by a passing driver at around 1:08pm.

At the start of the clip, police cars can be seen turning a corner as they take part in the high-speed chase.

It is unclear who they are chasing.

The first two vehicles make the turning comfortably, with other cars pulling in to give the officers room.

The third police car can be seen flying around the corner at speed before running into the bollards that protect a war memorial on the turning.

The car doesn’t move and with parts of it sent flying, the police vehicle is out of the chase.

Another squad car was sent to the scene of the collision to assist the officers who had crashed.

The a spokesperson for the North Wales Police confirmed that that no one was injured in the incident and said that the matter was under investigation. 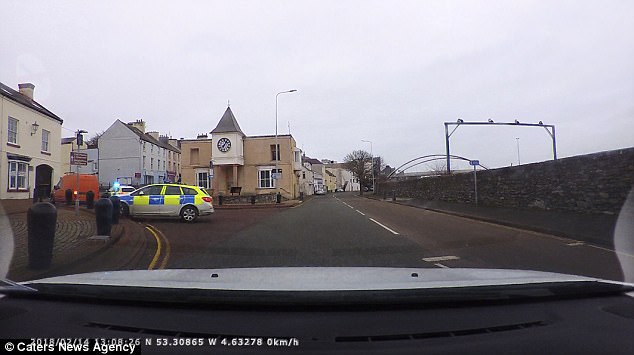 Two other police cars had made the turning but a third lost control and ploughed into the bollard, although no one was injured