The G7 summit is a security nightmare because of its ‘bonkers’ location at a seaside resort, a policing leader warned yesterday.

John Apter, head of the Police Federation in England and Wales, suggested little thought had been given to security plans when it was decided to hold the international event in Carbis Bay, in Cornwall.

He spoke out after a coalition of anarchists and nuclear disarmament demonstrators vowed to defy warnings to stay away next week.

Delegates from the G7 nations – the UK, US, Japan, Italy, France, Germany and Canada – will meet between June 11-13. Representatives from the European Union, Australia, India and South Korea will also attend.

John Apter, head of the Police Federation in England and Wales, has raised concerns about the location of the G7 Summit

Discussions are due to be held at the Carbis Bay Hotel, alongside a massive security operation. Police have erected a ring of steel around large sections of the resort, which borders the popular tourist town of St Ives.

Provisions have also been made for the arrival of 6,500 police officers from all 43 forces in England and Wales.

But many have questioned the wisdom of choosing a location with only one road going in and out, due to the logistical challenges that poses and the risk of protesters blocking access and causing mayhem.

Mr Apter said: ‘The problem with G7 is it is a significant security operation and the location is interesting – it’s bonkers logistically. 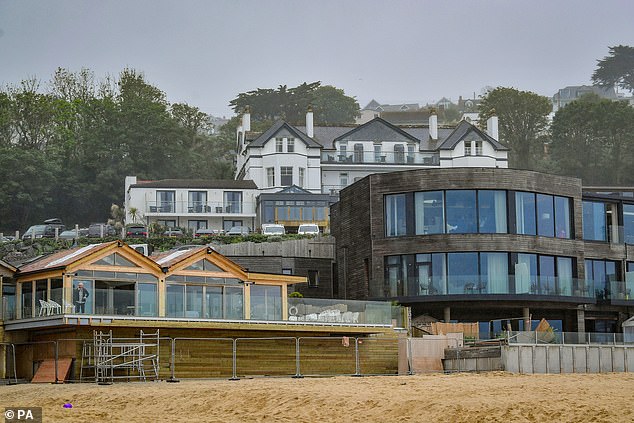 Police have erected a ring of steel around large sections of the Carbis Bay Hotel, alongside a massive security operation 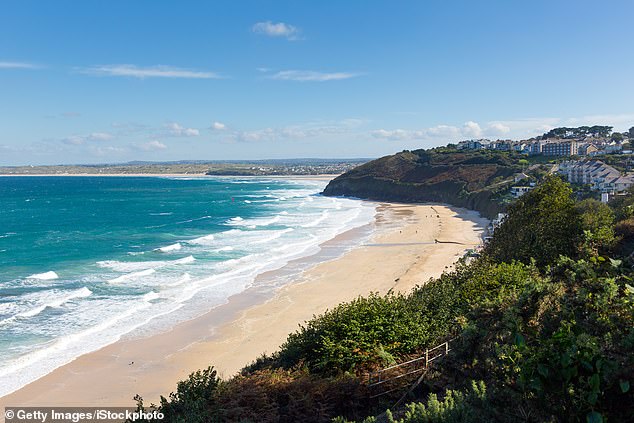 Boris Johnson has family ties to the resort which was the birthplace of his father, Stanley

‘Even trying to get accommodation for the officers and staff has been challenging. A lot of planning has gone into it, nothing is bigger than the heads of state coming together, police officers will do their utmost but many of them are knackered after this last year when there has been no break at all for them.

‘My frustration is that there seems to be a real lack of appreciation by the Government about how these decisions impact the police.’

Boris Johnson has family ties to the resort, which was home for decades to his great-grandparents and is the birthplace of his father Stanley.

The G8 in 2005 was marred by violence when hundreds of anarchists clashed with police in Scotland.

The row came as it was revealed Rishi Sunak has persuaded the world’s leading economies to force multinational tech firms to pay more tax. 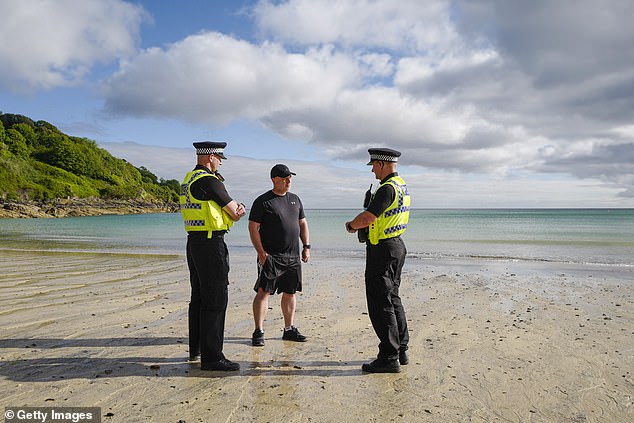 Provisions have also been made for the arrival of 6,500 police officers from all 43 forces in England and Wales

The landmark deal will impact companies such as Facebook and Amazon, which have been criticised for paying only small amounts of tax in the places where they sell large amounts of goods.

Chancellor Mr Sunak, who hosted the meeting of G7 finance ministers in London on Saturday, said that the agreement would create ‘a fairer tax system fit for the 21st century’. Former deputy prime minister Nick Clegg, who is now Facebook’s vice-president for global affairs, said: ‘We want the international tax reform process to succeed and recognise this could mean Facebook paying more tax, and in different places.’

But Oxfam said an agreed 15 per cent global minimum corporate tax rate was ‘far too low’ to make a difference.

Why this tax grab could backfire

No wonder Rishi Sunak was wreathed in smiles as he announced G7 ministers had agreed on a global tech tax deal. The Chancellor, one of the big political winners of the pandemic so far, is understandably keen to parade yet another feather in his cap.

But the Treasury’s excitable claims that the G7 has struck a ‘seismic’ agreement that will ultimately put a stop to tax-swerving by the likes of Amazon are premature, to say the least.

It’s important to acknowledge there is a huge problem with tech giants and their propensity to wriggle out of paying much tax in the UK – and in some cases anywhere on the planet.

Take Amazon. The online retailer’s coffers have been swollen by billions of pounds of additional sales in Britain during Covid. Yet it has handed over only a minuscule percentage of that income to the Exchequer.

This is not merely unfair, it is unsustainable at a time when we desperately need tax revenues to pump into the NHS, social care, education and other vital services.

But the G7 proposals, though manifestly well-intentioned, are a long way from being put into force. And even if they are, it is not at all clear they will have the desired effect.

Indeed, we have been here before. One of Rishi’s predecessors at Number 11, George Osborne, hailed an agreement against multinationals shunting profits into tax havens back in 2013, yet the scourge is with us still.

The latest proposals are for a global minimum corporate tax rate of 15 per cent and for multinationals to be obliged to share out a slice of their profits with the tax authorities in the countries where they operate.

The US has swung behind the deal largely for President Biden’s own domestic reasons. He wants to raise the rate of corporation tax to pay for his big spending plans on new infrastructure and education, and setting a global floor would deter companies from defecting to tax havens. However, the minimum rate plan is likely to face stiff opposition from Republicans. The system we have was designed for a very different era, when the world’s biggest companies had a physical presence and were therefore far easier to pin down and tax.

The regime is no longer fit for purpose. But the idea the G7 has this weekend created a new one that will work in the weightless world of tech is wishful thinking.

Even if – and it’s a very big if – the changes are adopted worldwide, it is far from clear the new tax rules will achieve their aims. Reallocating a chunk of profit so it can be taxed in the countries where sales are made is likely to have limited impact. It would only apply to companies making a profit margin of at least ten per cent.

Some big tech giants make surprisingly little profit, and the figures can be massaged down, legitimately, through accounting adjustments.

Simply put, it might not result in the likes of Amazon paying much more.

There could also be nasty unintended consequences. Inventive ideas here post-Brexit to use the tax system to pump growth could be kiboshed. Hopes, for example, of revitalising Red Wall areas through freeports, where businesses enjoy tax advantages, may be thrown into doubt if a minimum global rate becomes mandatory.

It would be wrong to be defeatist – it is in all our interests that tech giants are made to pay taxes that reflect the riches they reap.

But we should not fool ourselves into believing the hype that the problem is now solved.