Police: don’t troll parents of girl who died in car in River Teifi

Police have warned people not to troll the parents of a two-year-old girl who died inside a car after it rolled into a freezing river.

Kiara Moore was pulled from inside her mother’s silver Mini on Monday afternoon after it was found 150 yards down the River Teifi from where she left her in it.

The toddler was rushed to hospital by air ambulance after a frantic police search of the waters but doctors were unable to save her.

Mother Kim Rowlands, 25, took to Facebook to share her grief, saying she ‘will live with the guilt for the rest of her life’ and her father Jet Moore, 40, posted to say they thought the car had been stolen.

But after their emotional social media tributes, they have been flooded with comments, which police warn are potentially so malicious they could be illegal.

Police have warned people not to troll Kim Rowlands and Jet Moore (pictured), the parents of two-year-old old Kiara Moore (right) who died inside a car after it rolled into the freezing River Teifi in west Wales on Monday

Today Dyfed-Powys Police, which led the search for Kiara after the car was reported missing with her in it, warned people to ‘think very carefully’ before posting and not to speculate on the circumstances of the incident.

The force said in a tweet: ‘We are aware of comments on threads across social media which are being looked at.

‘Posts considered to be malicious will be recorded and police action may follow.’

They are due to quiz Kiara’s heartbroken parents and said they would not rule out bringing charges after confirming they are ‘not looking for anyone else in connection with the death.’

Kiara’s mother could face prosecution if lawyers decide she placed her daughter ‘at risk’ by leaving her alone close to the steep slope.

Ms Rowlands left her daughter strapped in her Mini close to a riverside slipway while she popped into her boyfriend’s office in Cardigan, west Wales.

She returned moments later to see it missing and feared it had been stolen, unaware it had slipped into the waters with her ‘Little Angel’ still inside, then carried 150 yards downstream.

The toddler was later pulled from the river after a frantic police search.

She wrote the day after on Facebook: ‘Sadly yesterday my beautiful baby girl passed away! Due to my own stupidity, I will have to live with the guilt for the rest of my life!

‘Mummy loves you baby girl and I’m so sorry!’ 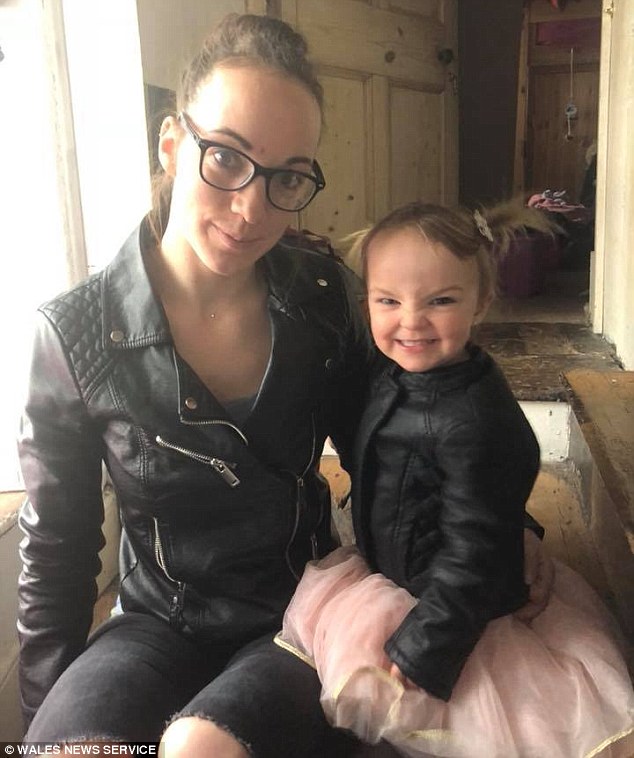 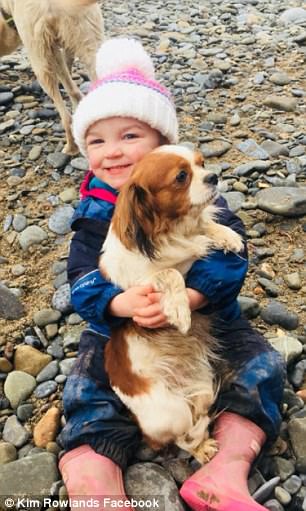 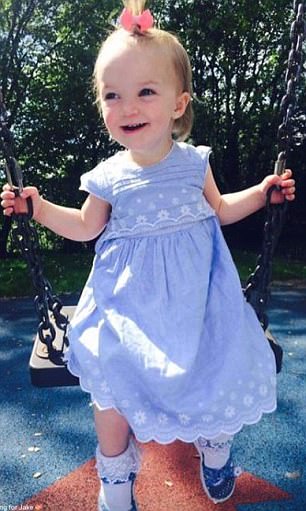 Nicola Rowlands, Kiara’s aunt, released this picture of her niece online in a desperate bid to find her yesterday

Leaving your own child on their own is not illegal – but it is an offence to leave them by themselves if it’s ‘likely to lead to injury or suffering.’

Children’s charity NSPCC warn in their own guidelines that babies, toddlers, and very young children should never be left alone.

Today’s police warning comes as specialist officers are believed to be investigating whether the electronic ‘button’ brake on the Mini was activated before the car rolled down the concrete slipway – used for kayaks to enter the waters of the River Teifi.

The 40-year-old wrote on Facebook: ‘They got in the car to go home. Sat on bank card which snapped and needed money to get home etc.

‘Went back to the office to get money from the desk and came back to no car.

‘Looked in the river No signs. So we thought she and the car had been taken. 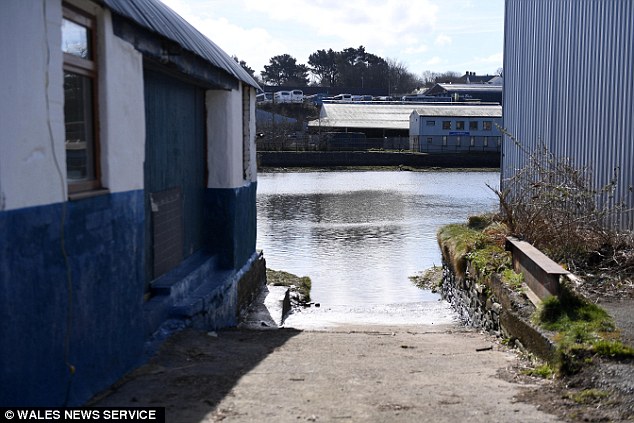 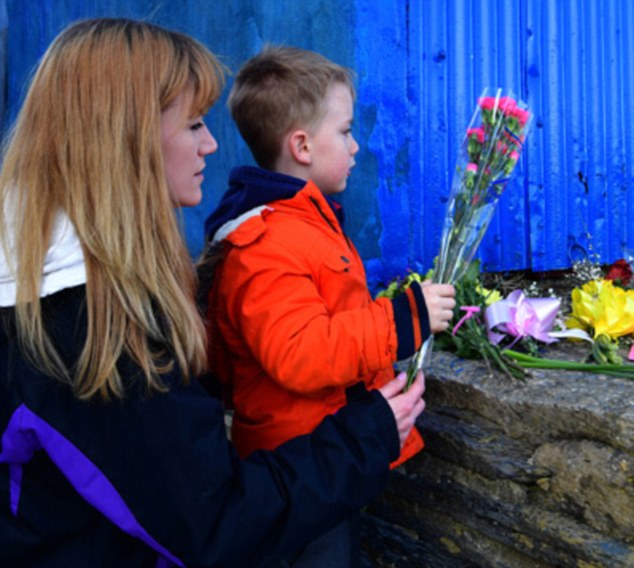 ‘The police found the car a while later and went way beyond the call of duty jumping in and pulling her out.

‘They tried to revive her for hours but unfortunately could not. Everyone done their best. Thank you all so much for the support it means the world!

‘She was an incredible happy young girl who lived I hope a great adventurous fun life. And may have done more than most people.

‘Been skiing twice and skied her self! Paddled the great glen Scotland. Paddles the Wye. Played on every beach we could. Had a Loving family and made us all happy.

‘She always wanted to be called RAR RAR which was our Knick Name (sic) for her. Love her so much.’

A file is also expected to be sent to the Crown Prosecution Service. 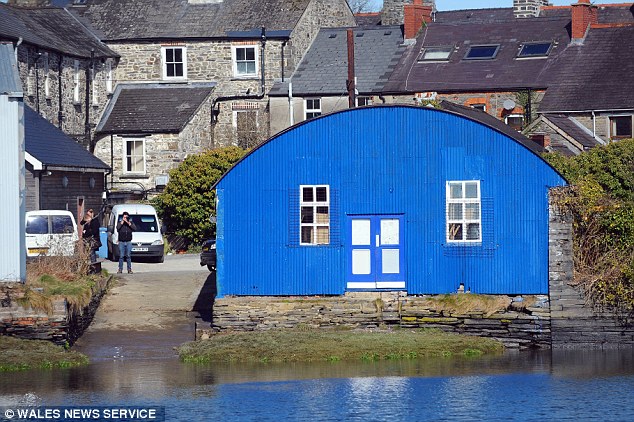 Kiara Moore was found in her mother Kim Rowland’s silver Mini, which had rolled into the River Teifi in Cardigan, Wales, moments after she left it. Pictured is the slipway where the car rolled into the water The child’s mother frantically on Facebook: ‘Can everyone look out for the car, It’s been stolen with my 3-year-old daughter in it. Please share!’ Pictured: Rescuers searching the river yesterday 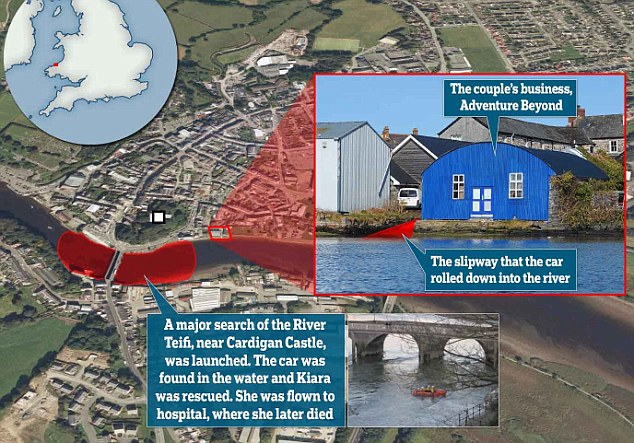 If Ms Rowlands is charged and found guilty of a single incident of short-term abandonment, she could face 12 weeks in jail.

A Dyfed Powys police spokesman said: ‘Inquiries are continuing and we are due to carry out interviews. We are not looking for anyone else in connection with the death.’

An inquest is due to be opened by Ceredigion coroner Peter Brunton to identify Kiara for her funeral.

No arrests have been made and there was no police presence at the scene this morning. 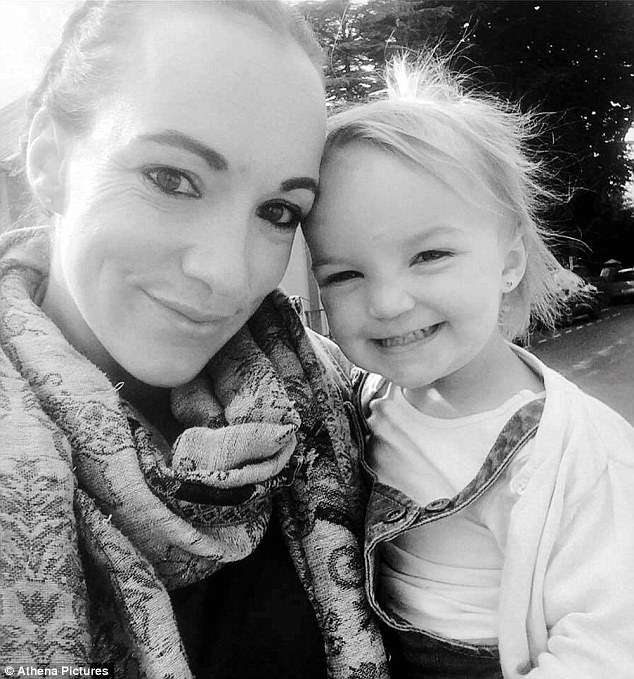 Ms Rowlands, reported her car had been stolen, near the old Scout Hall, with her daughter inside – sparking a major search in the area yesterday afternoon

Specialist officers will investigate whether the electronic ‘button’ brake on the Mini was activated before the car rolled down the concrete slipway – used for kayaks to enter the water.

A spokeswoman for the force yesterday said: ‘Police have made extensive enquiries into the circumstances surrounding this tragic incident and can now confirm that we are not looking for anyone else in connection with the investigation.

‘The vehicle was recovered from the river early this morning. H.M Coroner has been advised.

‘Kiara’s family are being supported by specially trained officers.’ 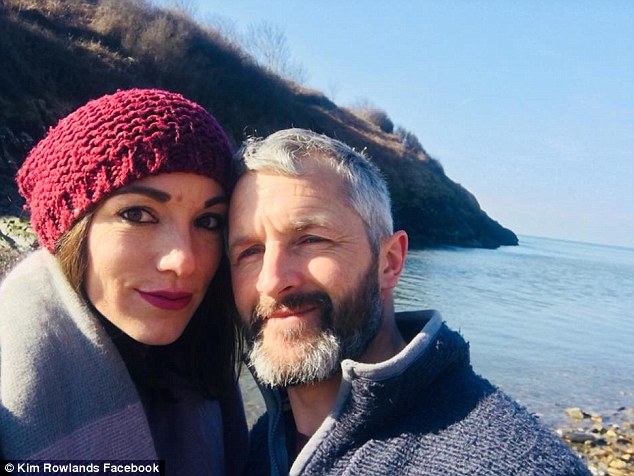 Her father, Jet Moore, has now confirmed the car rolled into the river outside his outdoor activity centre – before police dived in to try to save the youngster 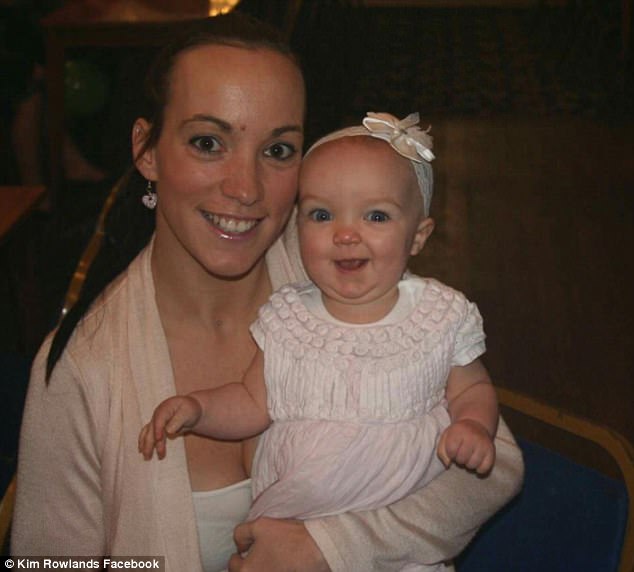 Just off the Strand is a slipway next to the old Scout Hall, which is given as the address for Mr Moore’s company, Adventure Beyond, an outdoor activity company, and is where police said the car was last seen.

Noel Lewis, who owns the Pioneer Garage on the other side of the slipway, said he knew Mr Moore and would see him as well as Kiara and her mother.

He said he often saw a silver Mini parked close to the slipway but he was not there on Monday so did not know if it was there then.

Of the slipway, he said: ‘It’s concrete, about four or five foot, going down into the river bed, which is quite deep, so if the Mini rolled back then the poor little girl didn’t stand a chance.’

He said he knew the family to say hello to and added: ‘It’s awful.’

Speaking to the BBC, he added: ‘Kiara was the most wonderful little girl.

‘She was always playing out here with her little dog. Her parents run an outdoor adventure business the other side of the slipway.

‘I’d often see them taking Kiara out on the river in a canoe. She always had a life jacket on when she was in the canoe with them. They’re a lovely family, always smiling and having fun together.’ 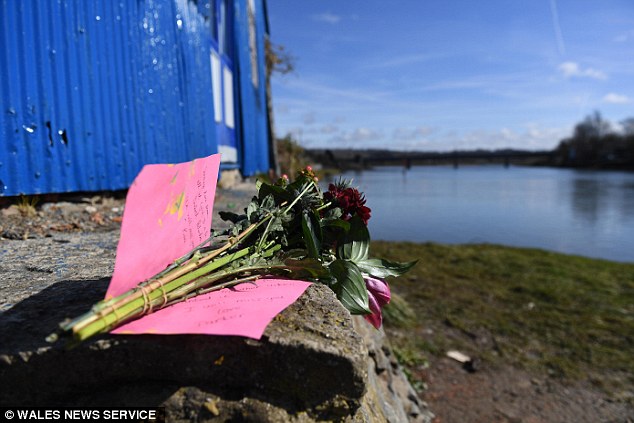 Floral tributes were laid at the scene of the tragedy, where two-year-old Kiara died yesterday 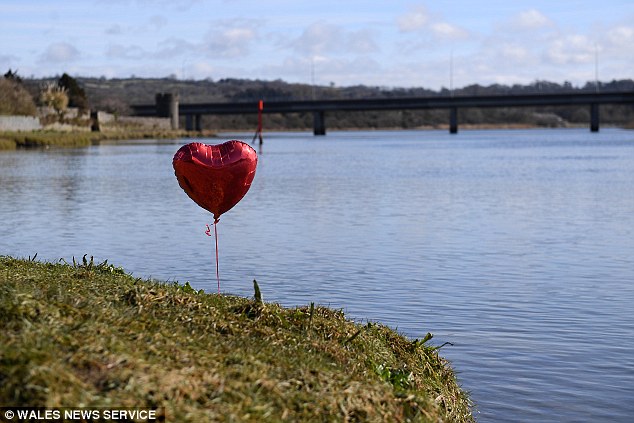 A love heart balloon was spotted near the water in tribute to Kiara Moore, who died yesterday 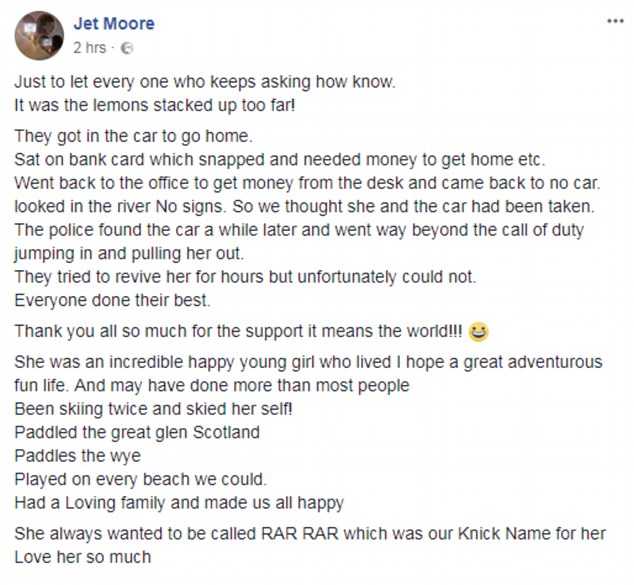 The silver Mini tragically rolled into the river outside dad Jet’s canoe and kayak touring company base called Cardigan Bay Active – with Kiara trapped in her child seat in the back.

Mr Moore, who is managing director of the company, runs activities such as white water rafting, canoeing, sea kayaking and tubing from the garage unit.

Ms Rowlands is said to spend a lot of time at the adventure base and is often seen parking her newly-bought Mini outside.

But it vanished as she parked at the top of the slipway – and she reported it stolen.

Mother, Ms Rowlands, wrote frantically on Facebook after her car disappeared yesterday: ‘Can everyone look out for the car, It’s been stolen with my 3-year-old daughter in it. Please share!’

Her sister, Nicola Rowlands, made her own appeal: ‘My sister’s car was stolen from Carmarthenshire with my 3 year old niece inside, please share and get my niece home safe!’

After a two-hour search the car was tragically found submerged in the river Teifi in Cardigan, Wales, just 50 yards from where it was reported stolen. 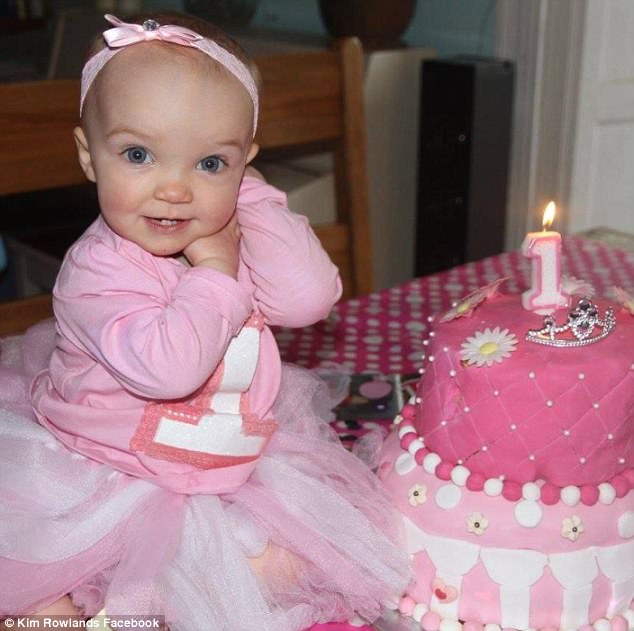 Kiara (pictured, on her first birthday) was flown more than 100 miles to hospital in Cardiff by air ambulance but doctors were unable to save her 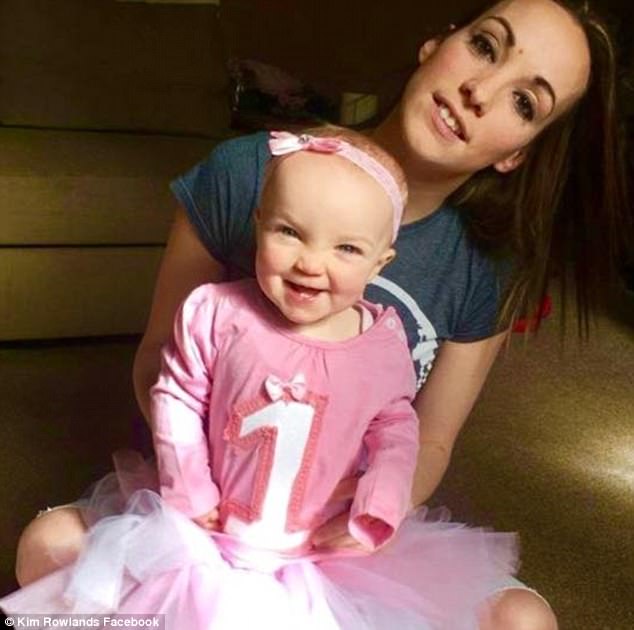 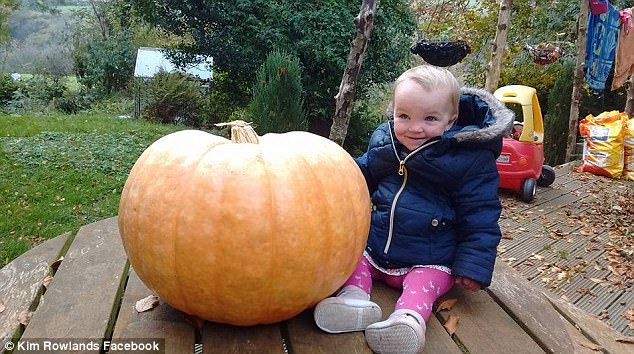 No arrests have been made over the tragedy. An inquest is due to be opened 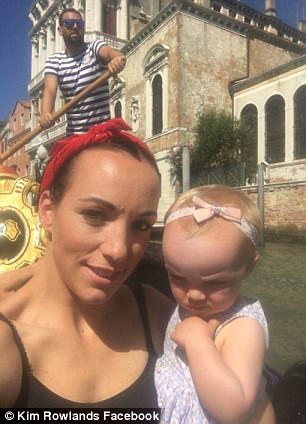 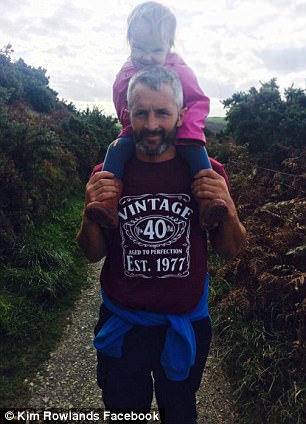 Kiara was flown more than 100 miles to hospital in Cardiff by air ambulance but doctors were unable to save her.

On Facebook, he wrote: ‘Thank you all for your help this evening. A mega thank you the officers who jumped in the river and the rest of the emergency services for all they did.

‘Unfortunately Kiara had an amazing but short life.’ 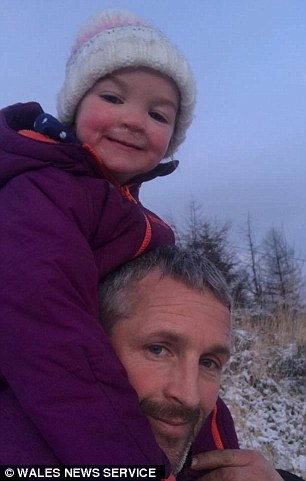 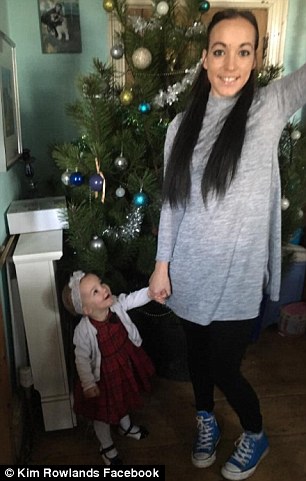 Jet Moore (pictured, left), who is in a relationship with the mother of the little girl, posted a heart-breaking tribute online 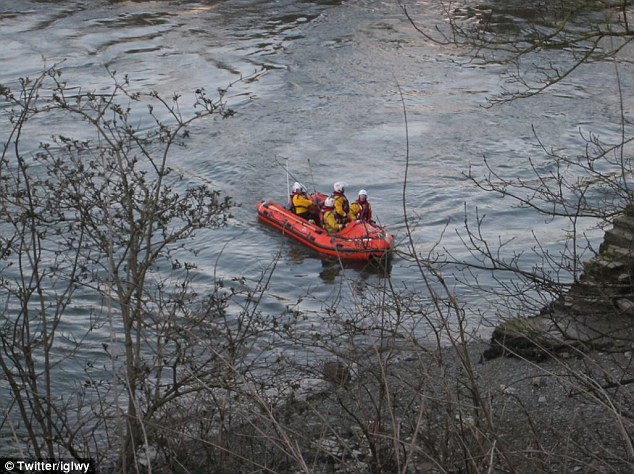 The force received a call about the missing vehicle at 3.30pm and posted on its Twitter page that the Mini had been located at 5.11pm. Pictured: The search earlier yesterday 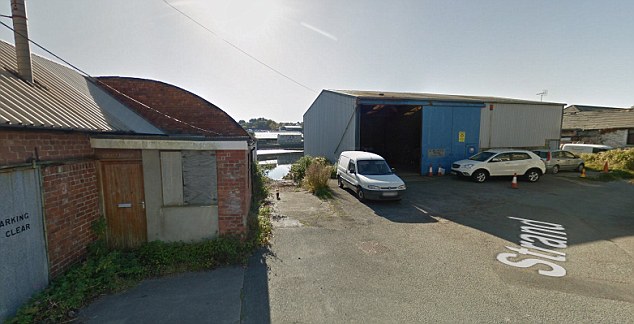 The car was reported stolen after last being seen outside the Scout Hall in Cardigan (pictured), police said 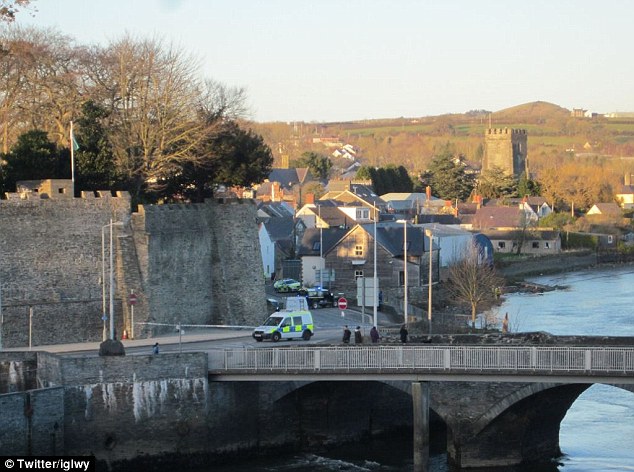 In a tweet, Dyfed-Powys Police said: ‘Following a call at 3.30pm we made enq. as to whereabouts of a silver mini, last seen in Cardigan near the old Scout Hall. During a search the vehicle was located in the River Teifi, Cardigan’

Her distraught family were yesterday being comforted over the death of ‘little angel’ Kiara who would have celebrated her third birthday on March 27.

In a tweet on Monday evening, Dyfed-Powys Police said: ‘Following a call at 3.30pm we made enq. as to whereabouts of a silver mini, last seen in Cardigan near the old Scout Hall.

‘During a search the vehicle was located in the River Teifi, Cardigan.

‘A child has been removed from the vehicle and is receiving medical attention.’ The family later confirmed Kiara had died. 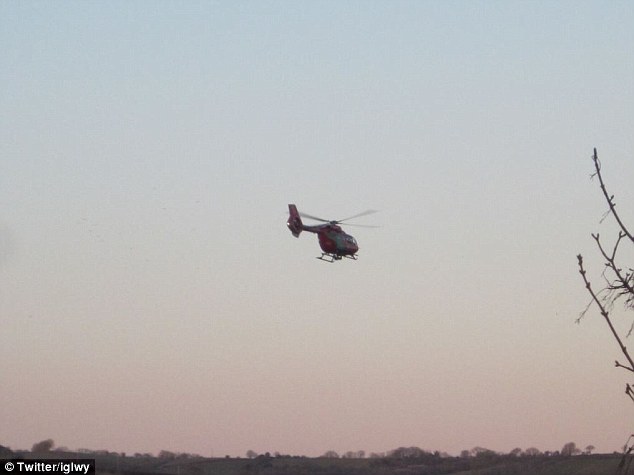 A Wales Air Ambulance is currently at the scene (and is pictured earlier). A spokesman for Milford Haven Coastguard added: ‘We have coastguard teams and a lifeboat assisting Dyfed-Powys Police with an incident on a river in Cardigan’ 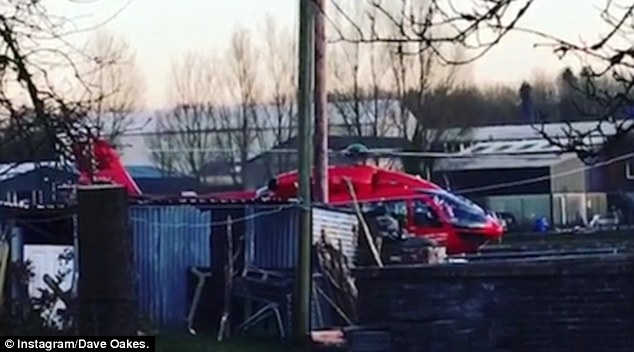 Police are appealing for witnesses to come forward by calling 101. Pictured: The air ambulance at the scene 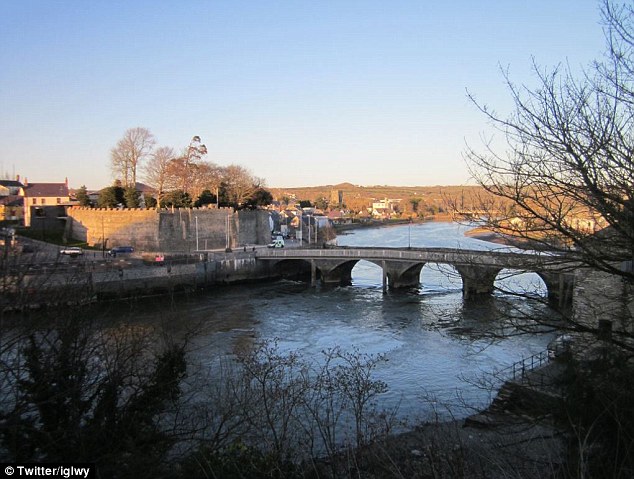 A woman believed to be the child’s aunt made her own appeal: ‘My sister’s car was stolen from Carmarthenshire with my 3 year old niece inside, please share and get my niece home safe!’ Pictured: The search earlier yesterday 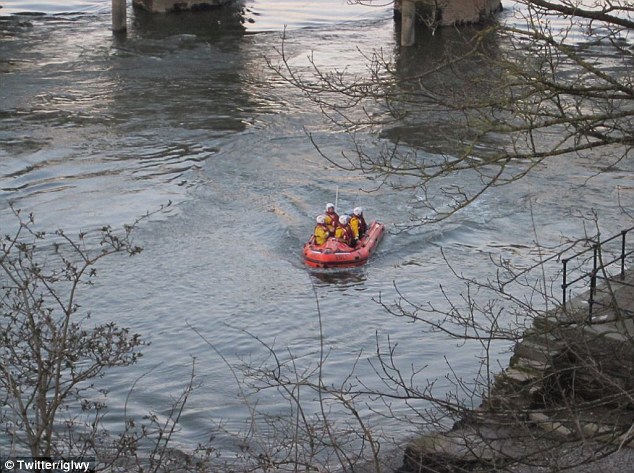 On Facebook , numerous posts claimed a silver Mini had been stolen from the town with a two-year-old girl in it

‘Thank you to those who tried to save her, and our thoughts are with all who loved her. Colled ifanc sy’n tristau cymuned. R.I.P Kiara Moore.’

Police are appealing for witnesses to come forward by calling 101