Police have issued warnings over drug dealers targeting children with £12 sweets laced with cannabis and ecstasy tablets that look like Lego bricks.

Cops made the discovery during a stop and search of a woman who had just bought £1000 worth of ketamine and 75 MDMA tablets.

But there are fears the drugs are being marketed at youngsters as the pills were made to look like the children’s toy.

It comes as Norfolk Police and the Metropolitan Police also issue warnings after seizing THC-laced sweets in Kingston that were designed to look like the US treat, Nerds.

Cops made the discovery of the tablets that look like Lego bricks, above, during a stop and search of a woman who had just bought £1000 worth of ketamine and 75 MDMA tablets

Totnes Police issued a warning on its Facebook page after the find on Tuesday. A spokesperson said: ‘We are particularly concerned about the tablets, the target market being Totnes youngsters.

‘MDMA, as shown in the photographs, can be dressed up to look like sweets (in this case LEGO) and appear less harmful than they are. They are simply dangerous drugs made up of who knows what.

‘There is obviously a market for them in Totnes. Please stay clear of these drugs. They can kill you.’

Police said the female who was arrested had her home searched the day after her arrest and was later released from custody under investigation whilst enquiries continue.

Meanwhile, the illegal packets of sweets found in Kingston were emblazoned with cartoon characters from the popular US comedy show, Rick and Morty.

The sweets contained THC or Tetrahydrocannabinol, which is the active compound found in most cannabis that gives the ‘high’ sensation. 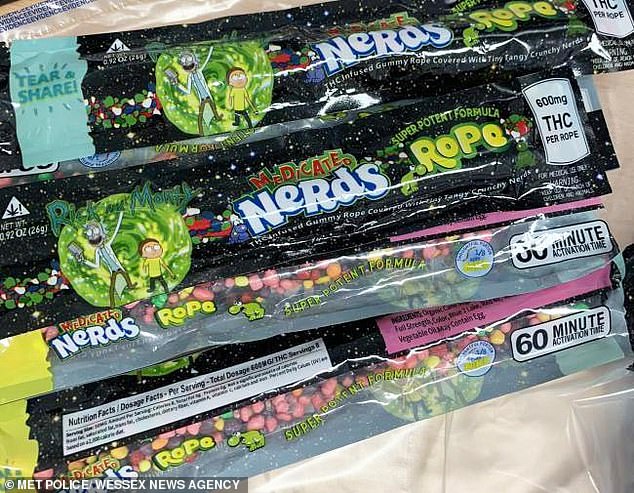 The THC-laced sweets seized by the Met Police in Kingston. Young schoolchildren are being lured into eating cannabis-laced sweets for £12 in school-gate deals 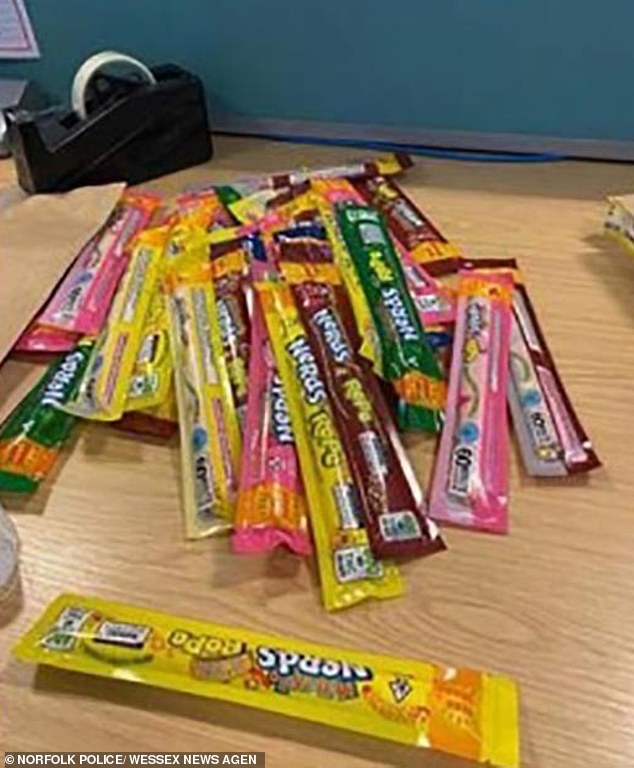 Norfolk Police and the Metropolitan Police have issued warning after seizing THC-laced sweets in Kingston that were designed to look like the US treat, Nerds

The packaging on the sweets claim they contain 600mg of THC, which when ingested would be equivalent to smoking roughly 30 normal cannabis joints.

It’s feared that county lines gangs, facing cash shortfalls because addicts aren’t on the streets in the pandemic, are turning to primary school children.

It is unclear whether the THC-laced products, which are sold legally in 11 states in the US, were smuggled into the UK.

Packaging for the sweets is sold online in the UK for as little as 14p – meaning that dealers could be making their own sweets before putting them into packets.

The police’s safer schools team have made teachers aware of reports that bags of THC-laced sweets are being sold for £12.

Sergeant Daniel Edwards said ‘Although they initially look like normal ”Nerds” sweets we believe they are likely to contain cannabis, which is listed as an ingredient. 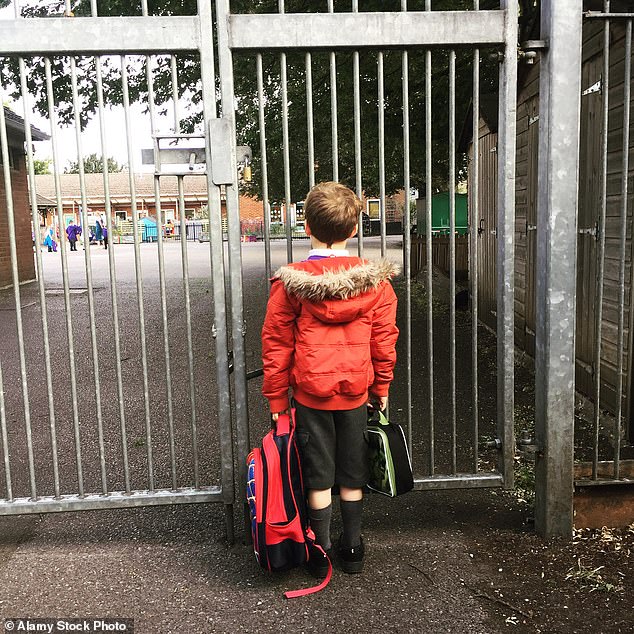 The sweets, found in Kingston, contained THC or Tetrahydrocannabinol, which is the active compound found in most cannabis that gives the ‘high’ sensation (stock picture) 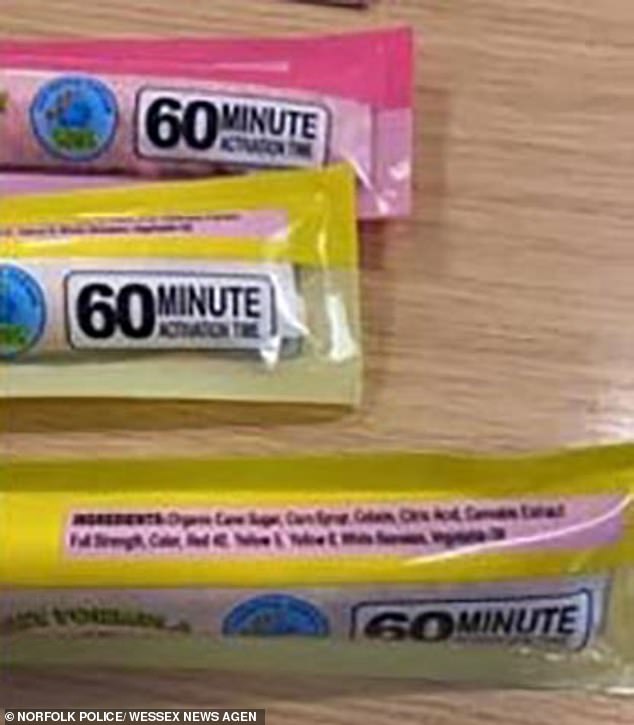 It’s feared that county lines gangs, facing cash shortfalls because addicts aren’t on the streets in the pandemic, are turning to primary school children. Pictured: THC-laced sweet packaging which claims that the effects of the drug will be felt 60 minutes after consumption

‘We are currently having the sweets forensically tested for confirmation but would like the public to be aware and vigilant.

‘We know that they are being offered to children in Norfolk, particularly in the King’s Lynn and Breckland areas.’

Police arrested a 21-year-old woman on the A149 near King’s Lynn on Saturday, July 4, for possession with intent to supply cannabis.

A police spokesman said the woman was stopped in a car at 7.30pm on Snettisham Road. She was interviewed at King’s Lynn Police Investigation Centre and was released under investigation pending further enquires.

Officers from the Metropolitan Police also seized packets of sweets from a road user in Kingston after discovering they contained the psychoactive compound THC.

The sweet packets, some of which were themed around the popular cartoon programme Rick and Morty, were labelled as containing THC. 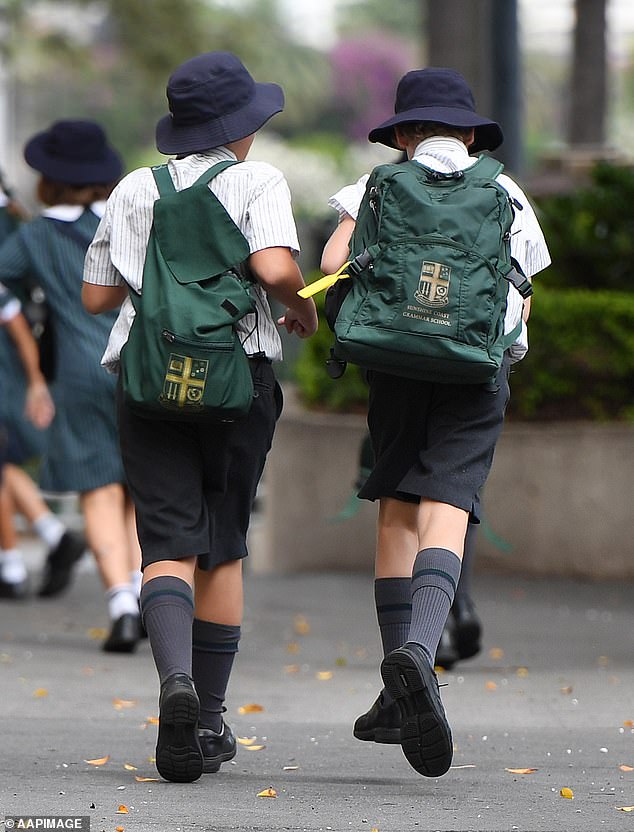 In a Twitter post, Kingston police said colleagues from the Met’s Road and Transport team had ‘taken the items into custody and dealt with the road user out of court following a Stop and Search’. They added: ‘THC is Illegal.’

An image posted with the tweet showed several packets of ‘rope’ sweet purporting to contain THC.

While the Kingston MPS tweet suggested that THC is illegal in all instances, recent changes to UK law mean that it is available in small doses from specialist doctors in the UK, who are legally allowed to prescribe cannabis-derived medicinal products.

That was after a cannabis product called Sativex, which is a 50-50 mix of THC and CBD produced in a lab, was been approved for use in the UK by the Medicines and Healthcare products Regulatory Agency as a treatment for multiple sclerosis.

CBD, or cannabidiol, is a chemical compound found in cannabis but it does not give a ‘high’ sensation in the way THC does because it is not a psychoactive compound.

It is often used by those who suffer with anxiety or chronic pain as it acts in a similar way to a muscle relaxant.