Police are hunting for a thief who allegedly stole cash from a flat abandoned by Grenfell Tower six days after the devastating blaze.

Residents affected by the tragedy were notified of the theft on Friday – which police believe happened on Tuesday June 20.

It was led to fears other properties were targeted by thieves and police have now bolstered security within Grenfell Tower.

DCI Matt Bonner told them: ‘Some money appears to have been stolen from a flat within Grenfell Tower…this is clearly a serious allegation and one that must be fully investigated.’

He insisted police would ‘follow every possible line of inquiry to establish who is responsible for the theft and how the offence was committed’.

It was unclear how much money was missing, the Guardian reported.

MP David Lammy wrote on Twitter: ‘Where were the police? This is a crime scene. We are seeing a litany of failures for Grenfell survivors.’

A volunteer at Grenfell added: ‘It’s like stealing from a graveyard in my opinion, it’s really immoral and pretty horrific.’

The Metropolitan police said security round the tower block had been increased.

A spokesman said: ‘An investigation into the alleged theft is now being carried out.

‘Steps have been taken to review the security of all the flats within Grenfell Tower, and some changes immediately put into place.’ 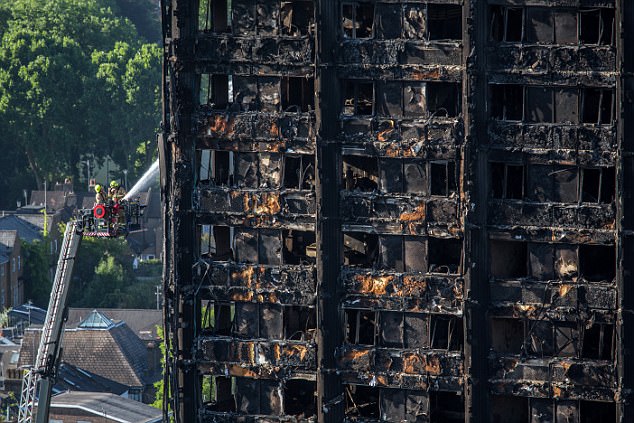 The public inquiry into the disaster will begin this month.

At least 89 people died when flames engulfed the 24-storey block while hundreds more were left homeless.

At least 20 survivors and witnesses of the blaze have attempted to end their lives while struggling to get images of the burning tower ‘out of their minds’.

Silence of Suicide founder Yvette Greenway said the figure was based on conversations with workers in the area as she warned the area surrounding the charred building has been gripped by a mental health crisis.

More than 800 people have had mental health assessments following the fire, with more than 200 referred for treatment after suffering post-traumatic stress, according to Kensington and Chelsea Council.

Last week a Zimbabwean national Joyce Msokeri, 46, was charged with fraud after allegedly claiming to be survivor of the fire in order to cash in on donations.

She appeared in court accused of pocketing at least £10,000 in cash and spending nights at the Hilton hotel by pretending to have survived the high-rise block inferno.

She will appear before Westminster magistrates court in central London tomorrow.

Msokeri is the second person to be charged with fraud in relation to the fire.

Anh Nhu Nguyen, 52, pleaded not guilty to two counts of the offence after being accused of pretending his family died in the fire to claim almost £10,000 from the victims’ relief fund.

His trial is scheduled to start in early December.