A charity volunteer returned home after raising money to find armed police had smashed his front door open to look for guns.

Mark Calvin was in Welshpool 40 miles away from his house collecting money for Guide Dogs UK, when officers used a battering ram to get into his home following reports of a ‘domestic dispute’.

He only found out that the police operation had happened at his house in Dolgellau, north Wales, when his neighbour approached him about the incident in a car park.

Mr Calvin said: ‘I am a bit shaken up. The police battered down my door as they believed that there were firearms in the house.

‘It turned out to be misinformation and they have completely exonerated me of any wrongdoing.’

At around 3.30pm officers smashed in the door of Mr Clavin’s house, as his partner was also absent from the property at the time.

Mr Calvin added: ‘I only found out because I was in a car park and my neighbour said the police had broken into my house.

‘I walked up and was directed to speak to an officer behind the cordon, and he told me what happened.’

Police arrived at Eldon Square around 11am after receiving reports of a ‘domestic dispute’ in a flat.

Witnesses said that before the police came they had heard a large bang, which to some sounded like a gunshot.

When Officers could not find the flat’s occupants after searching the property, they began looking for them elsewhere. 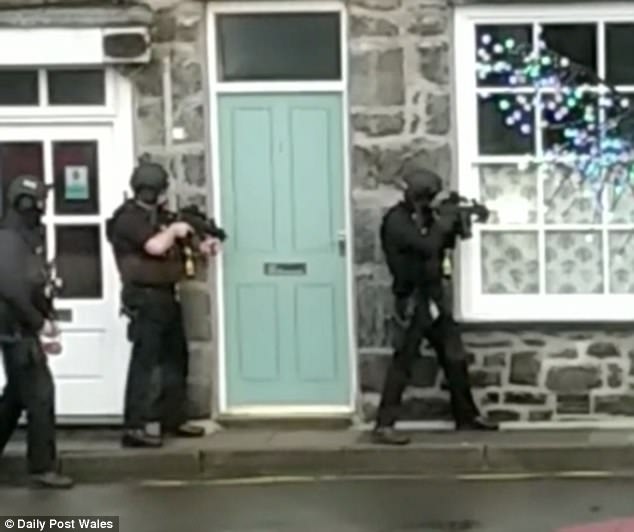 He only found out that the police operation had happened at his house in Dolgellau, north Wales, when his neighbour approached him in a car park. Police arrived at Eldon Square around 11am after receiving a report of a ‘domestic dispute’ in a flat

Part of the town was cordoned off and officers who were carrying riot shields and who were wearing body armour searched the streets, whilst a specialist dog unit was put on standby.

Police later released a statement that said ‘evidence of firearms’ had been found at the flat in Eldon Square, but there was an innocent explanation and no one was injured.

Mr Calvin said that, despite the damage to his property, he does not blame the police for breaking in.

He said: ‘The police have been very apologetic and have promised they will make good the damage.

‘I seem to have just been an unfortunate piece of the collateral damage.

‘The lock to my door was halfway down my hallway so they obviously came in at some force. 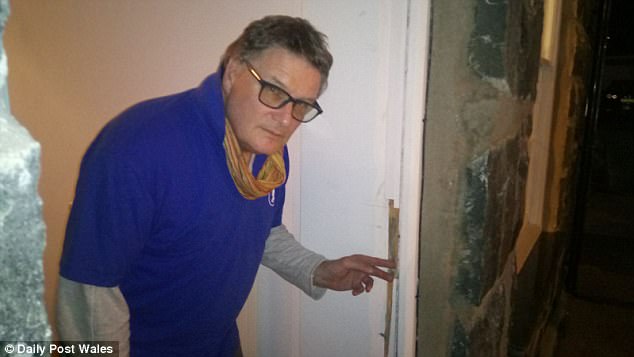 Mr Calvin said that, despite the damage to his property, he does not blame the police for breaking in

‘My solicItor actually caught the whole thing on camera and you can see that the police did spend some time knocking on the door. Both me and my partner were away so there was no answer and that’s when they knocked the door down.

‘If the police honestly believed there was a gun at the property, they have a job to do.

‘I don’t want to have a pop at the police. What else could they have done in the situation?’

Superintendent Nick Evans said: ‘The incident was reported to us in good faith by a member of the public who genuinely feared someone had been harmed.

‘As it turns out there was an innocent explanation and everyone was safe.

‘I’d like to pass on my thanks to the local community for their patience and understanding during the incident and particularly the member of the public who made the call.’